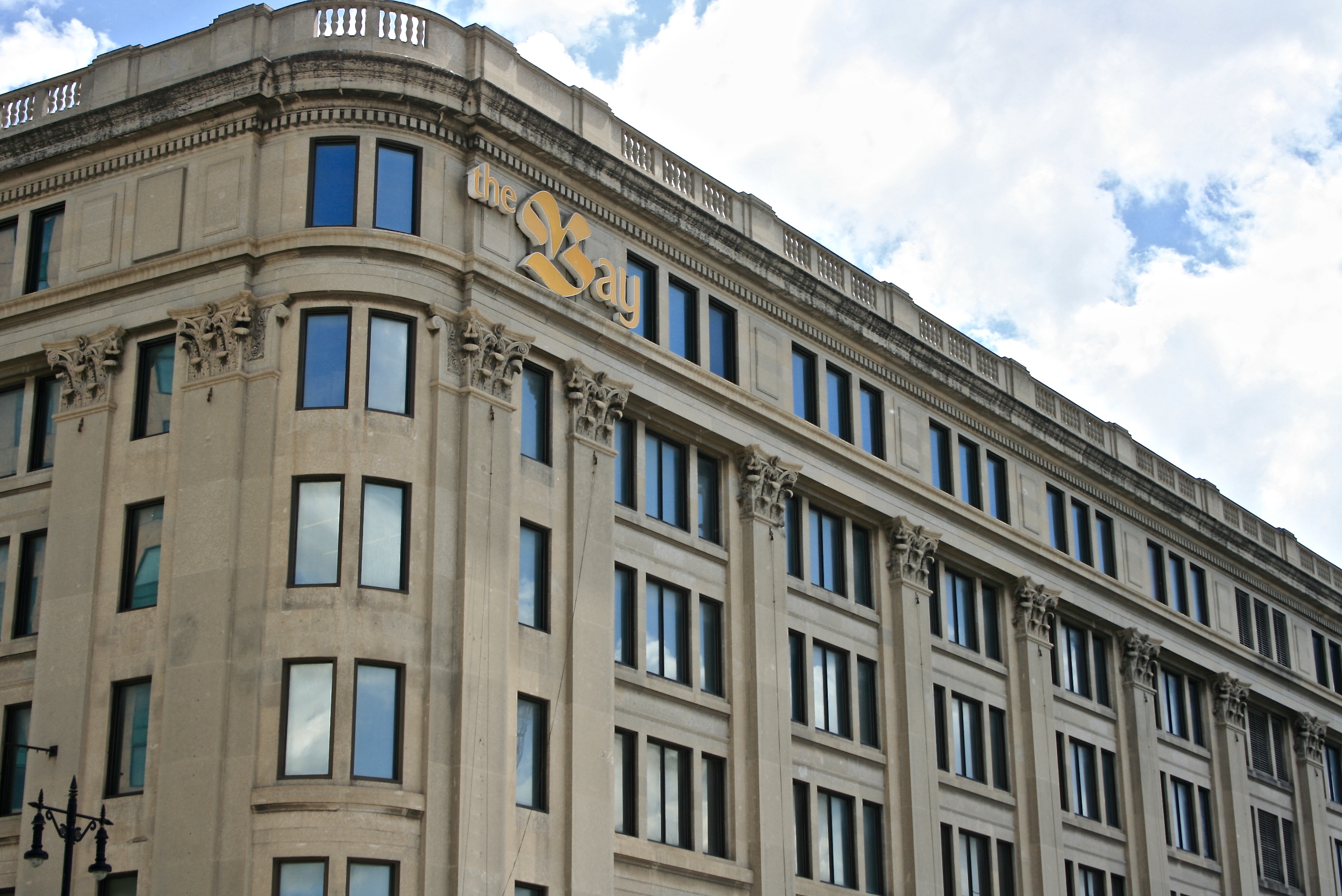 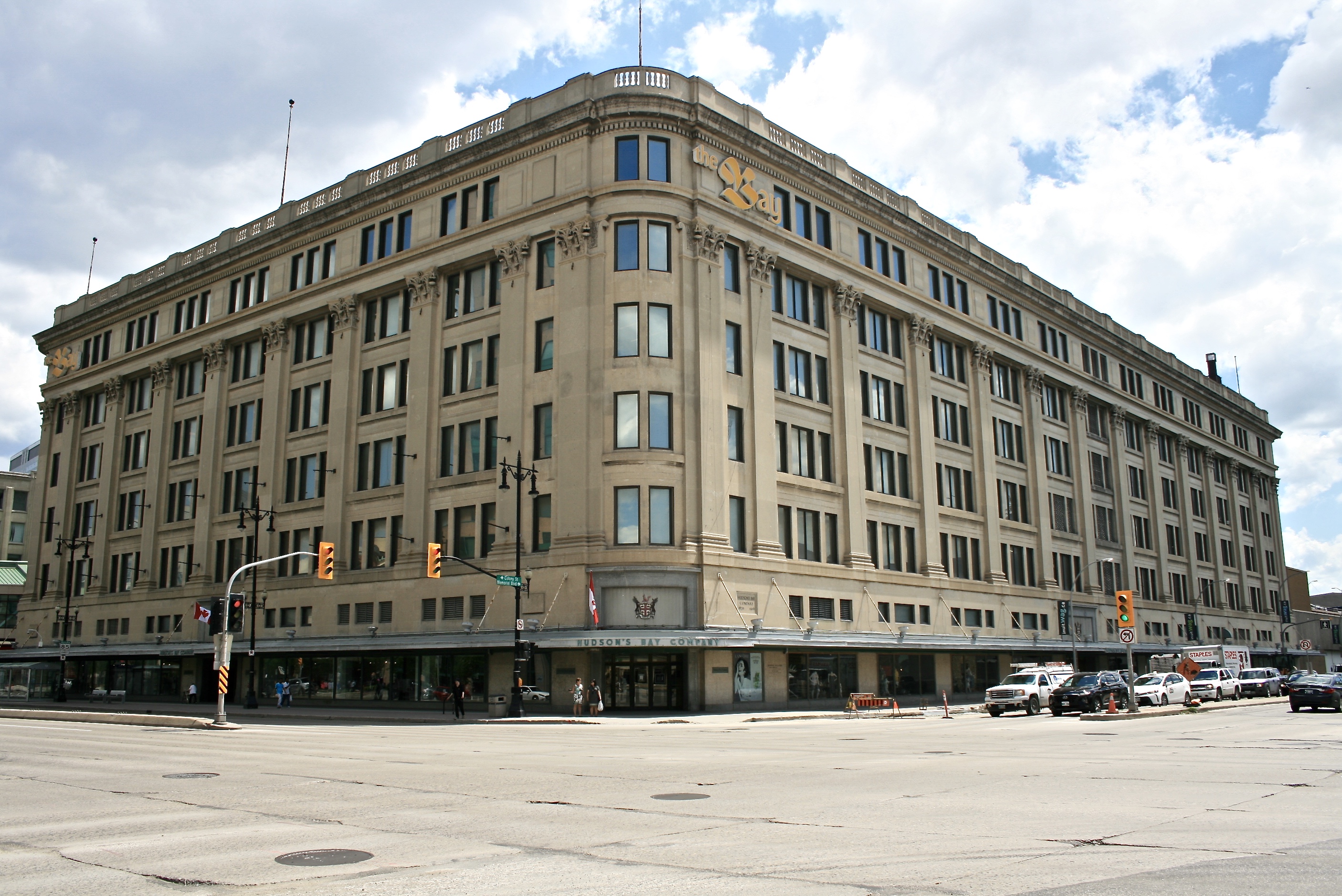 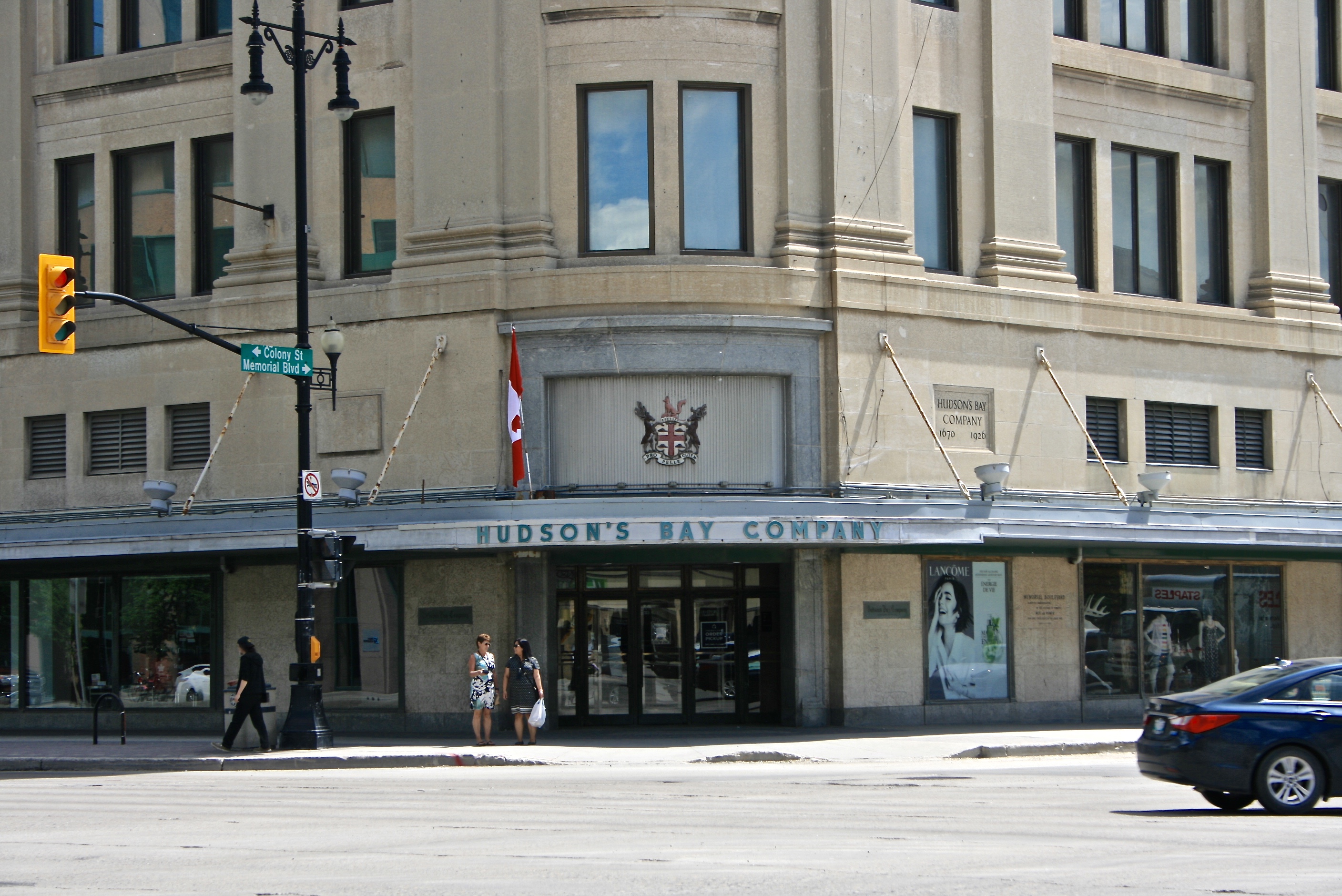 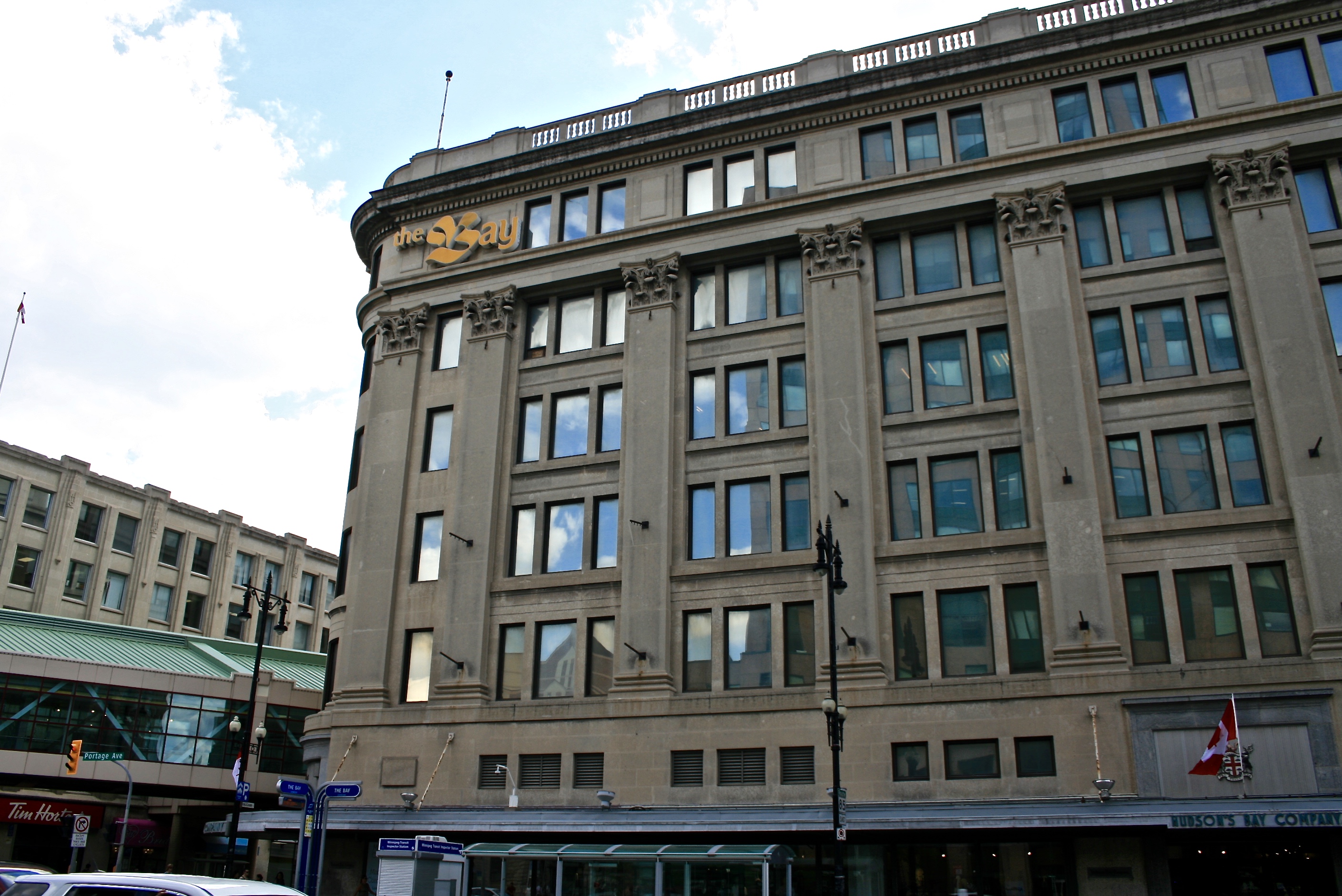 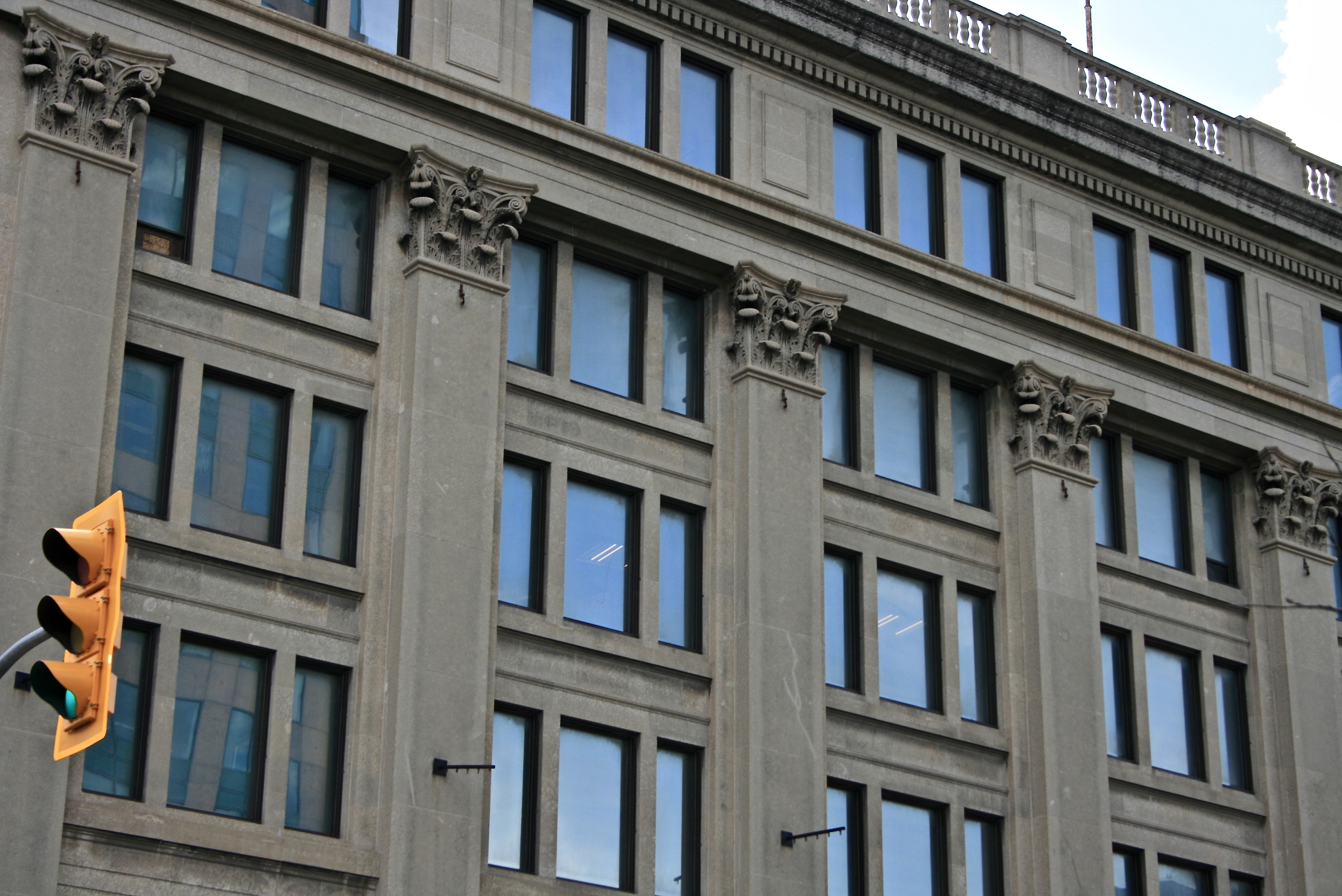 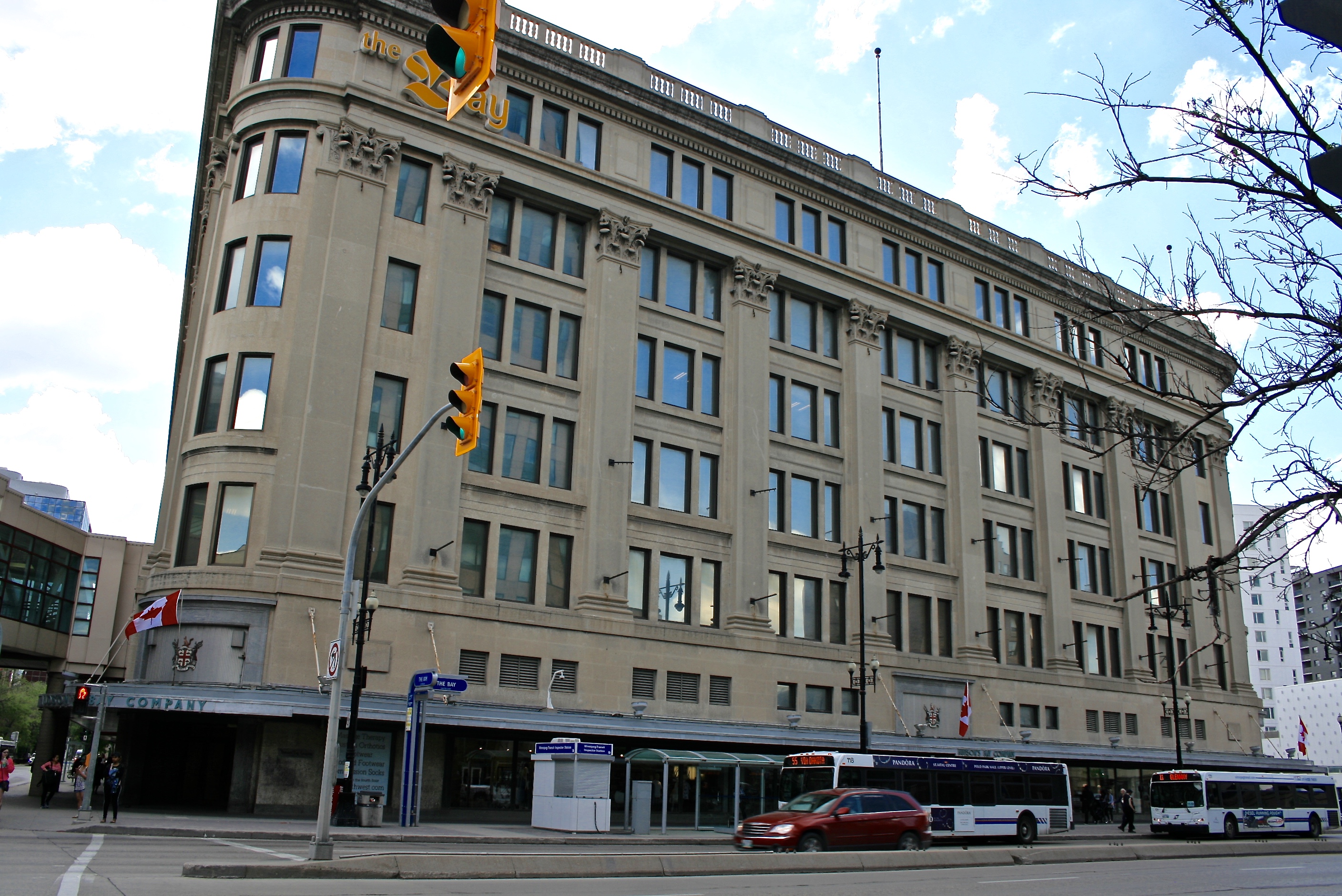 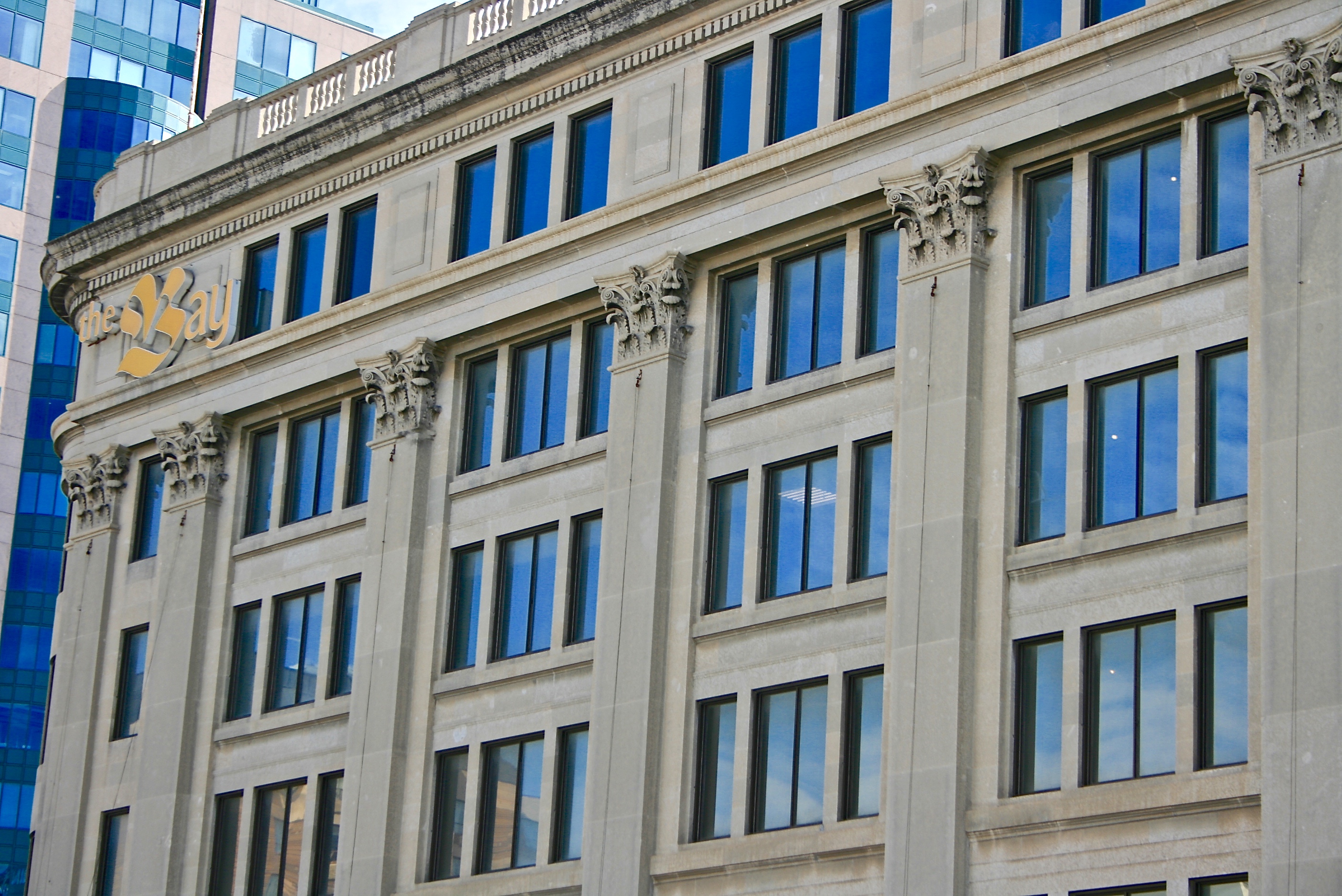 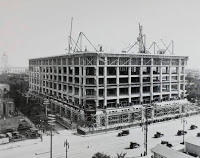 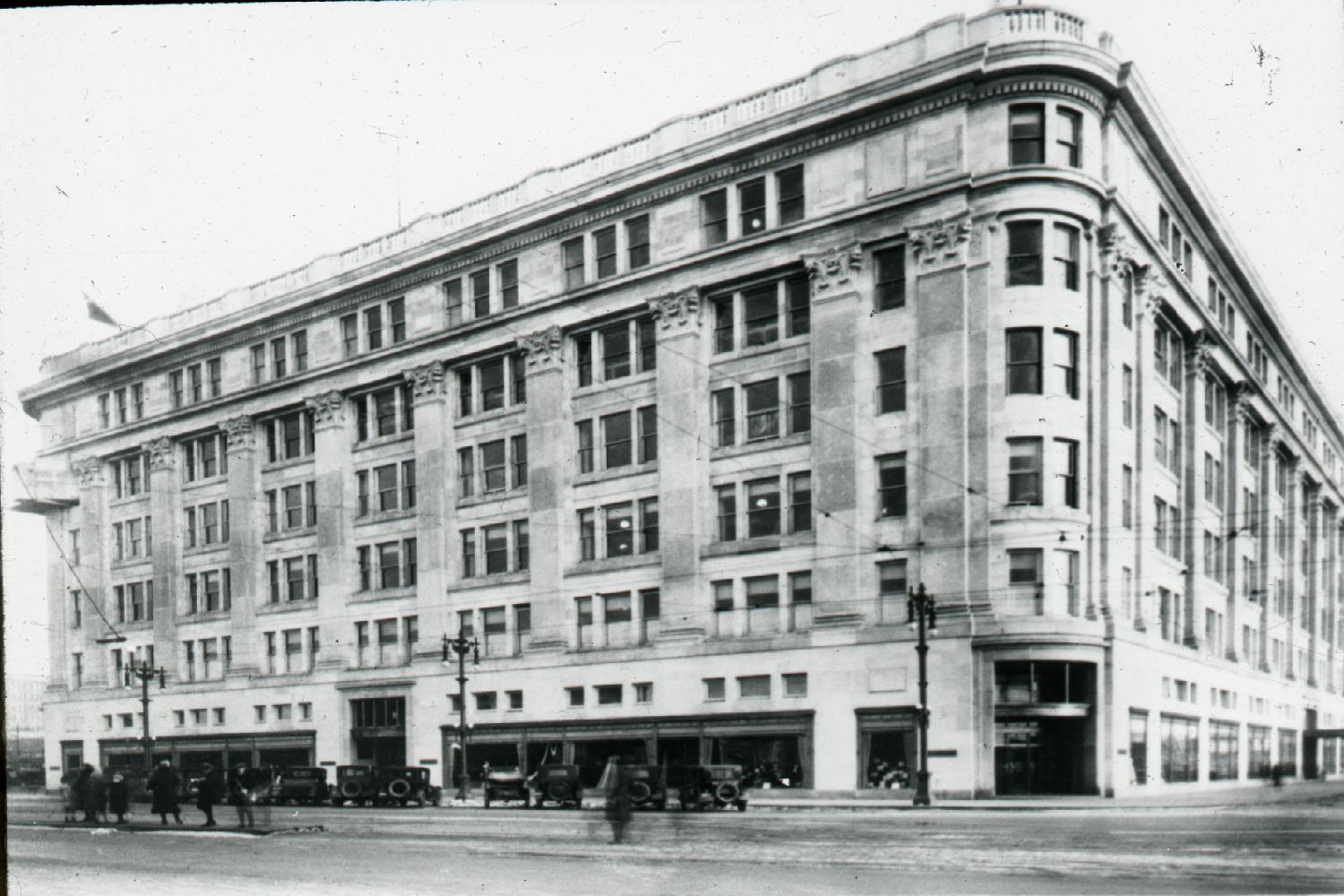 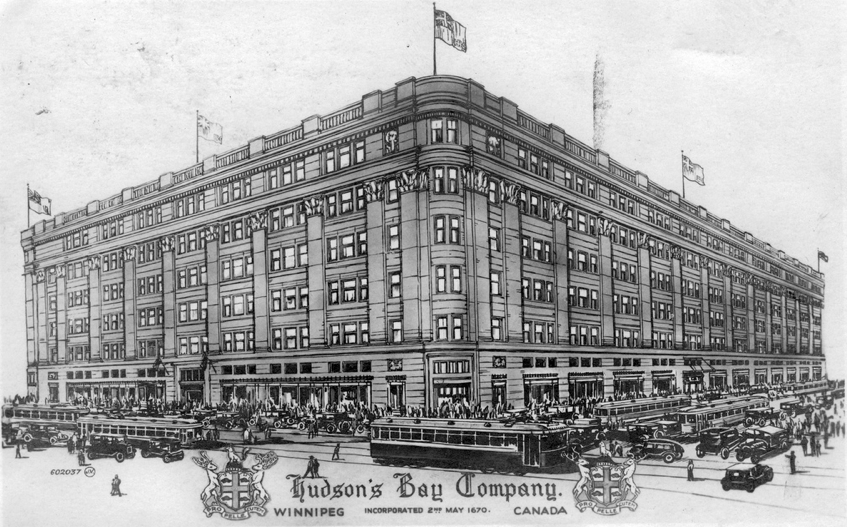 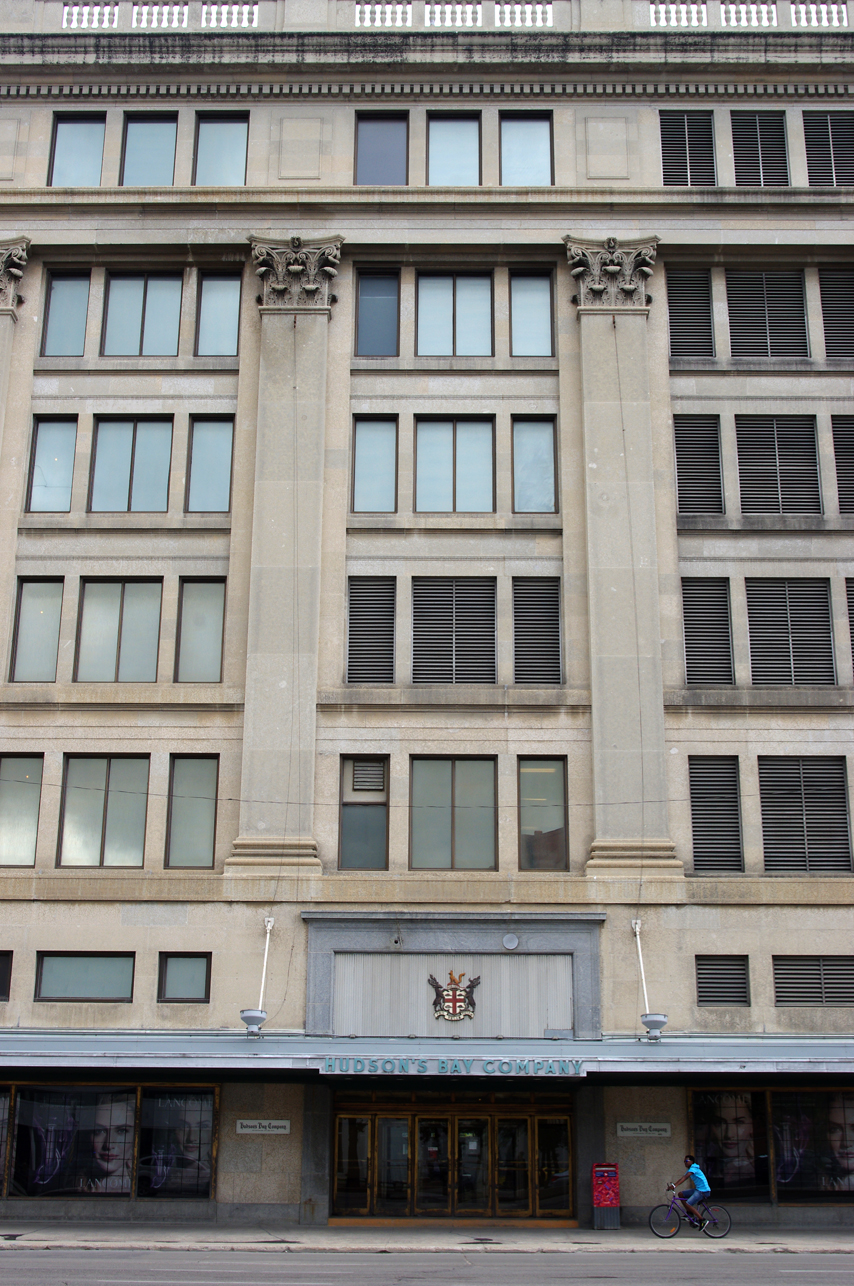 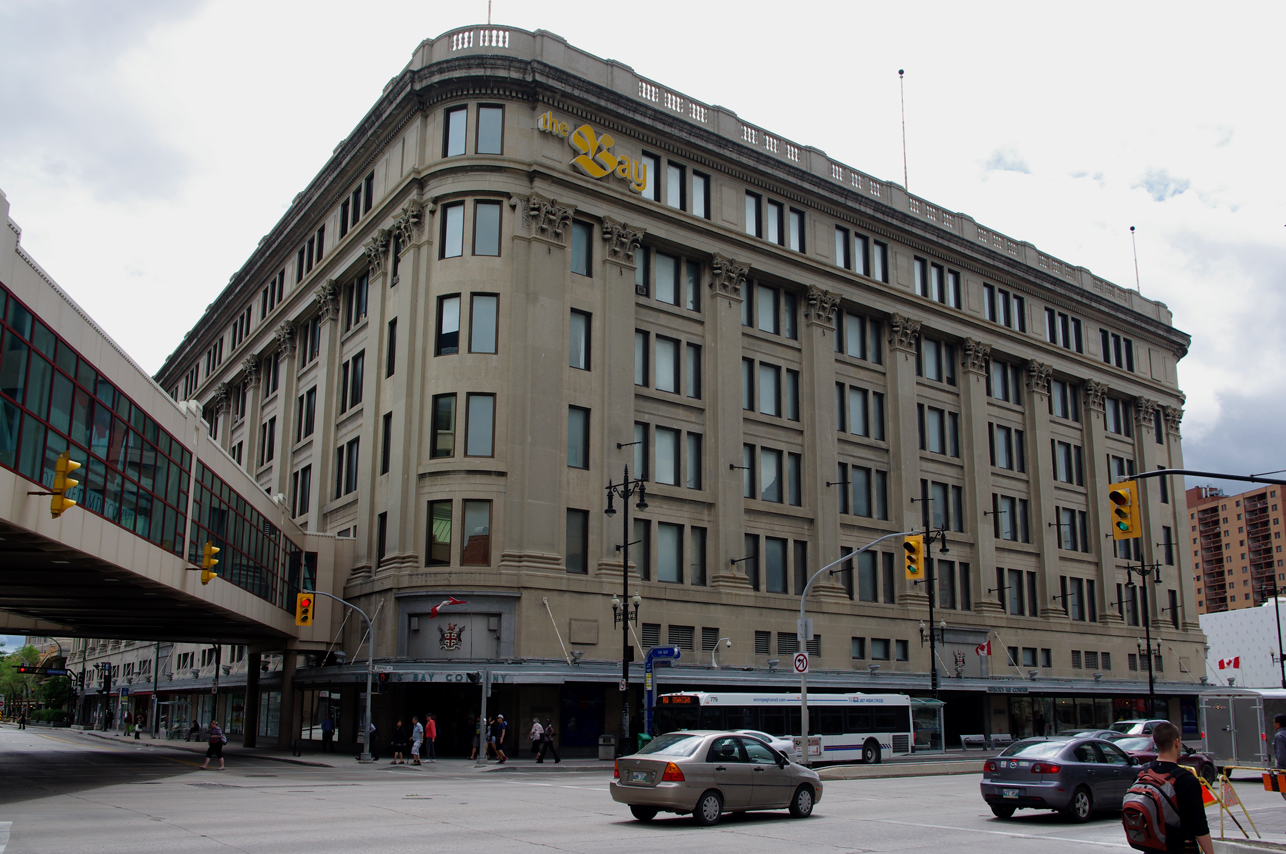 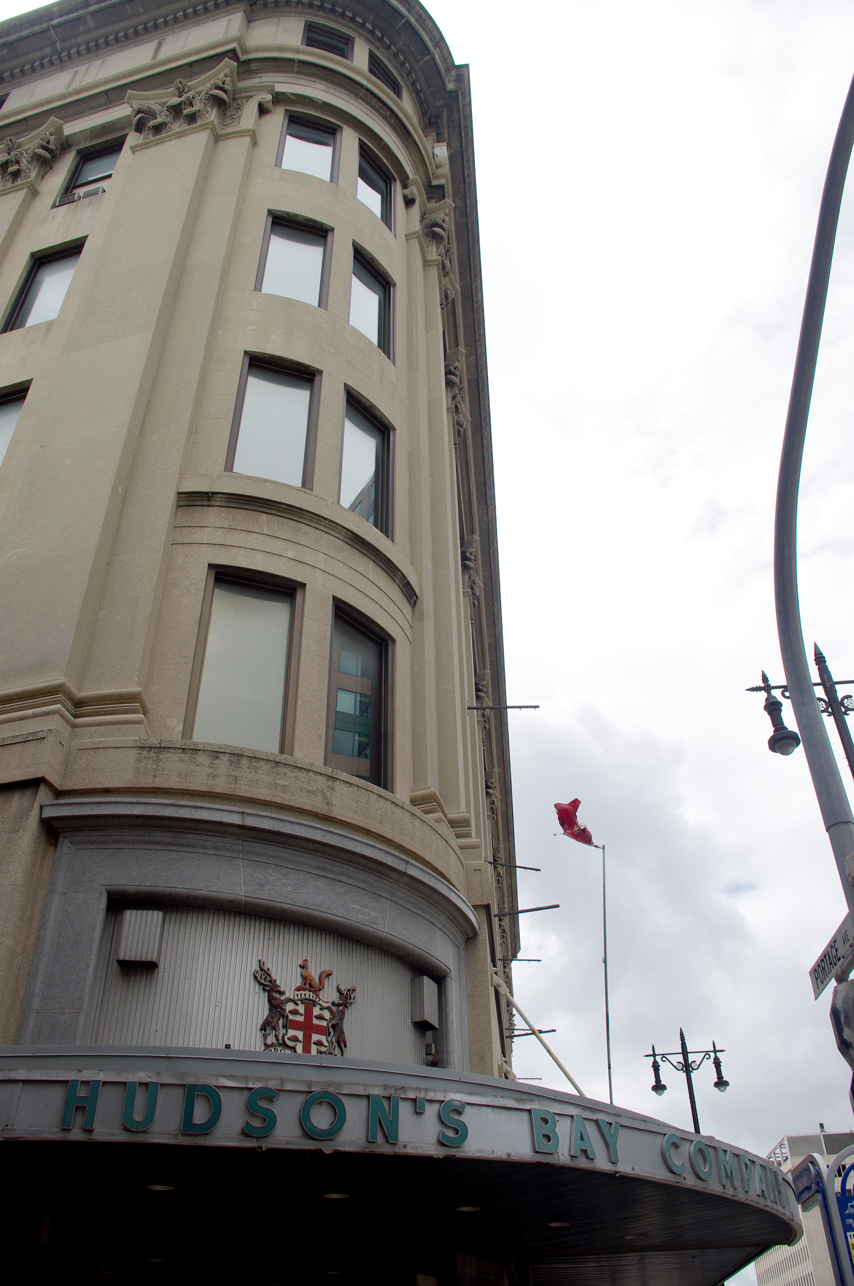 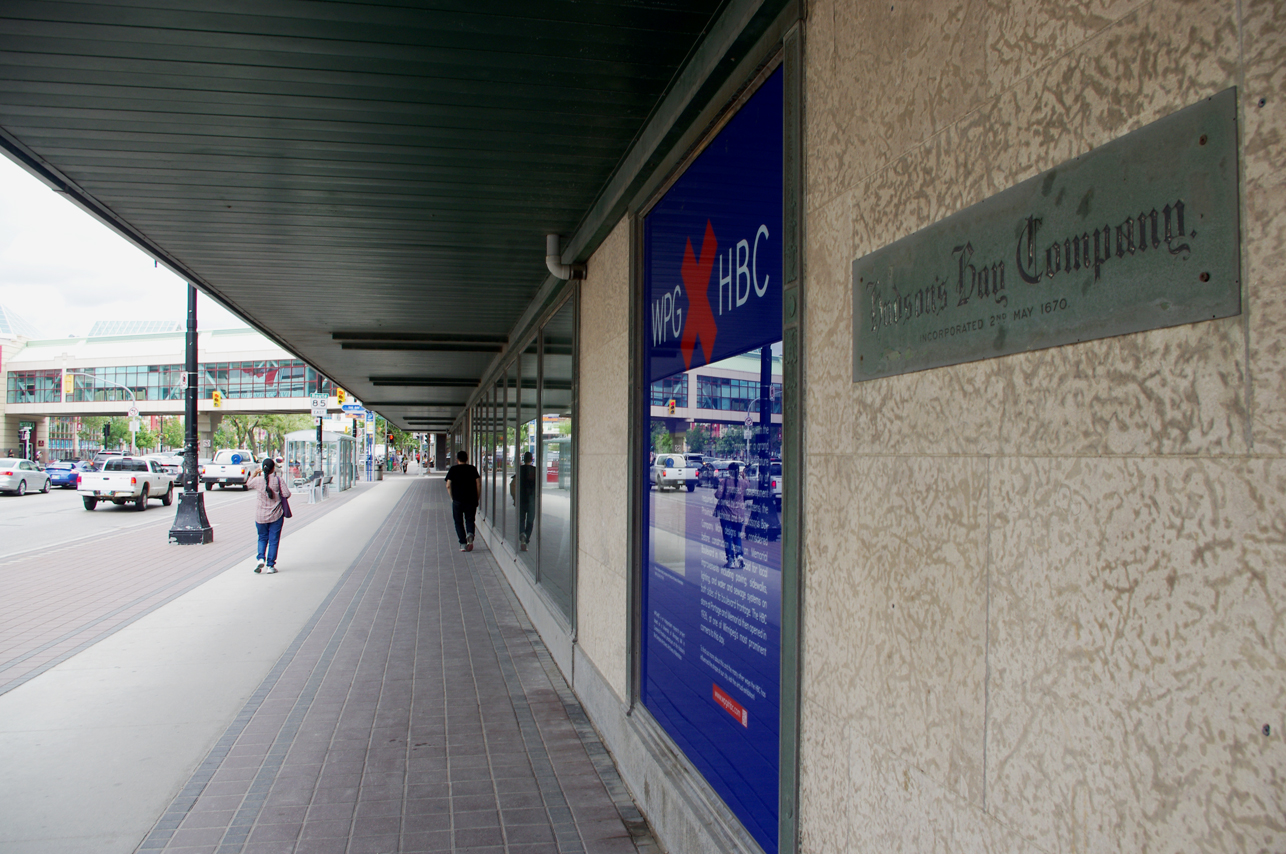 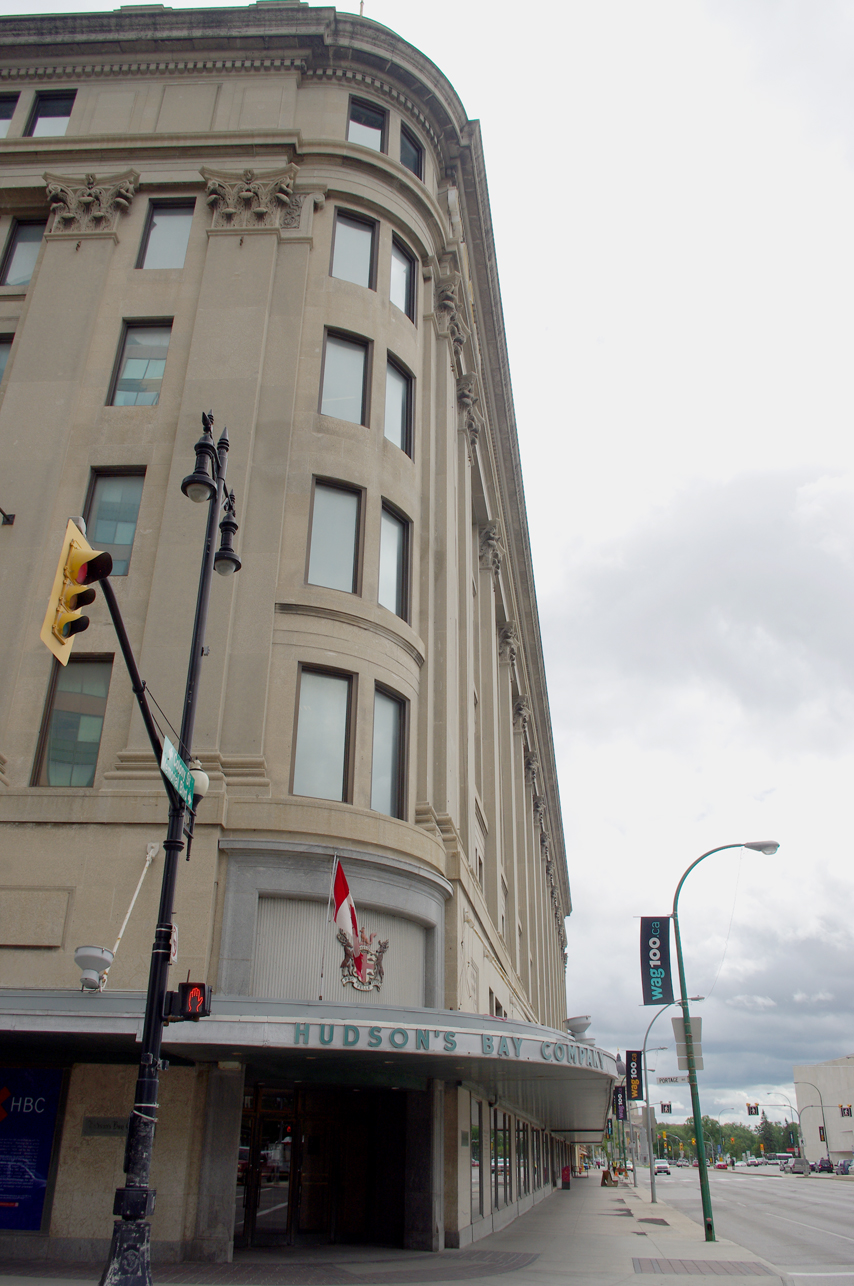 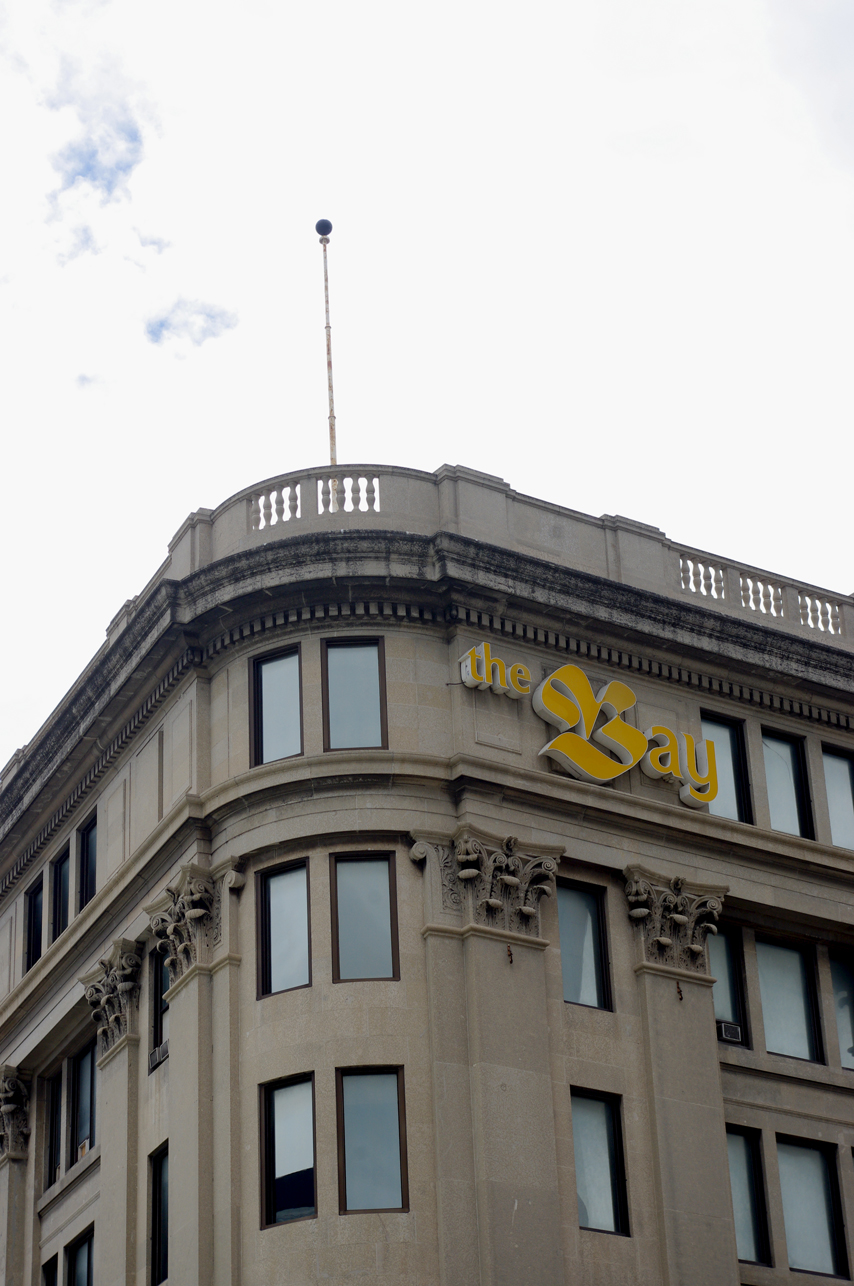 The Hudson’s Bay Company (HBC) played an integral role in the creation and development of Winnipeg. HBC was founded in 1670 as a fur trading business. The importance of the fur trade started to diminish by the end of the nineteenth century and HBC began to modernize, turning trading posts into sales shops. As part of its modernization, HBC decided to build six major department stores in Canada. One of these department stores was built in Winnipeg.

The Bay Building was designed by Montreal architects Barott and Blackader and is a fine example of the Beaux-Arts style of architecture in Winnipeg. The building was constructed almost entirely of materials sourced from Manitoba. This included 125,000 cubic feet of Tyndall limestone from Gypsumville, steel and furnaces from Selkirk, and roofing from St. Boniface. To build the foundation for the Bay Building, workers had to remove 150,000 tons of earth from the site. It took 300 men, 120 teams of horses, 20 trucks, and two steam shovels to get the job done.

The department store reaches six storeys high, although the caissons were designed to support four additional floors. Despite the vast size of the store, only the first three levels were in use on November 18th, 1926, opening day. The first level of the store included an arcade along with retail space. The fourth and fifth floor were complete a year later in 1927. The final floor completed in the building in 1930. Traversing the multiple levels of the department store was eased with twelve elevators with were installed. six elevators took customers up and another six took them to the lower levels.

In 1936 the arcade on the first floor of the building was removed and the space was rebuilt by construction firm Carter-Halls-Aldinger. The redesign included the incorporation of two staircases leading to the basement and the installation of escalators between the main and second floors. The overall cost for these alterations was $65,000. In 1947 The entire left bank of elevators was removed and the escalators were relocated and extended from the basement to the fifth floor. This project was completed in 1948. The store switched their coal heating system to oil which eliminated the need for the coal dock on Vaughan Street in 1950.

The first major alteration of the building's exterior occurred in 1956 when Moody Moore Architects designed the canopy which runs from Memorial Boulevard, Portage Avenue, and Vaughan Street. The new canopy allowed for a more three dimensional facade rather than the flat features the building was original design. By the twenty-first century the canopy was in need of a restoration which was carried out in 2001 - 2002.

The HBC department store became apart of Walkway Winnipeg in 1987 when the addition of a sky walk was implemented, connecting the store to 428 Portage and Portage Place.