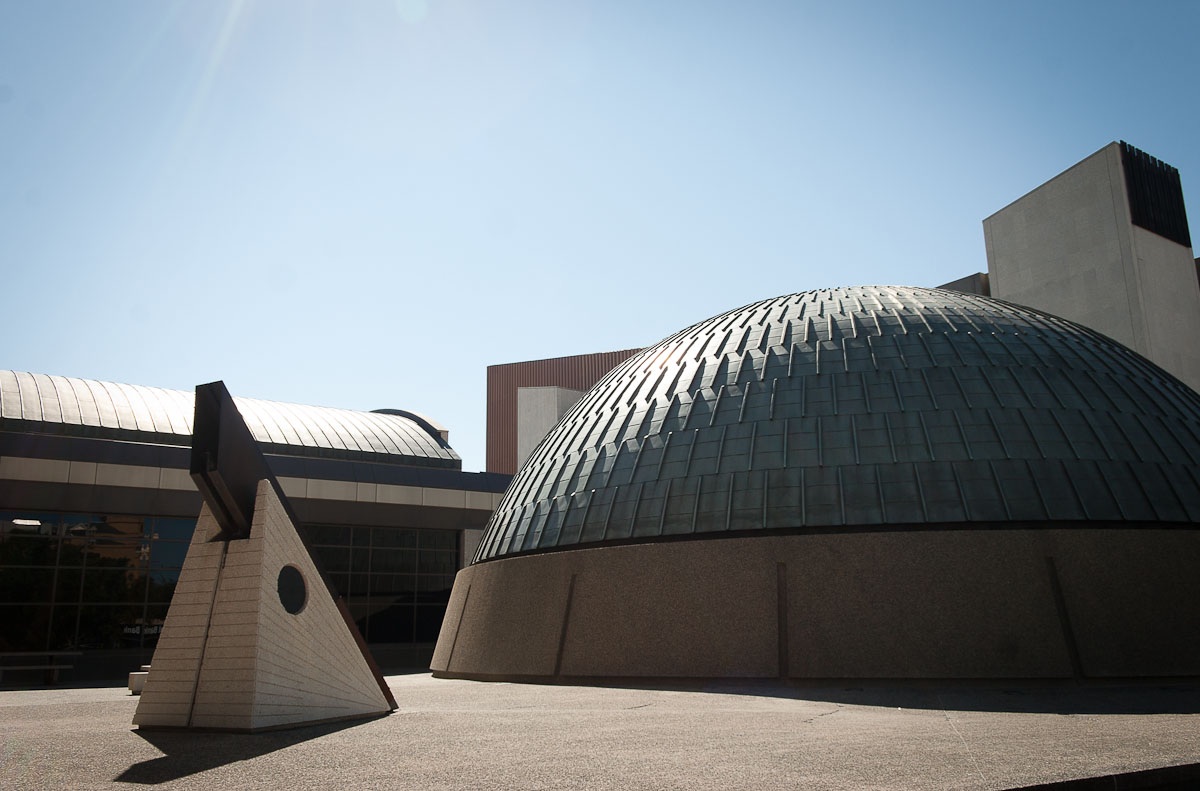 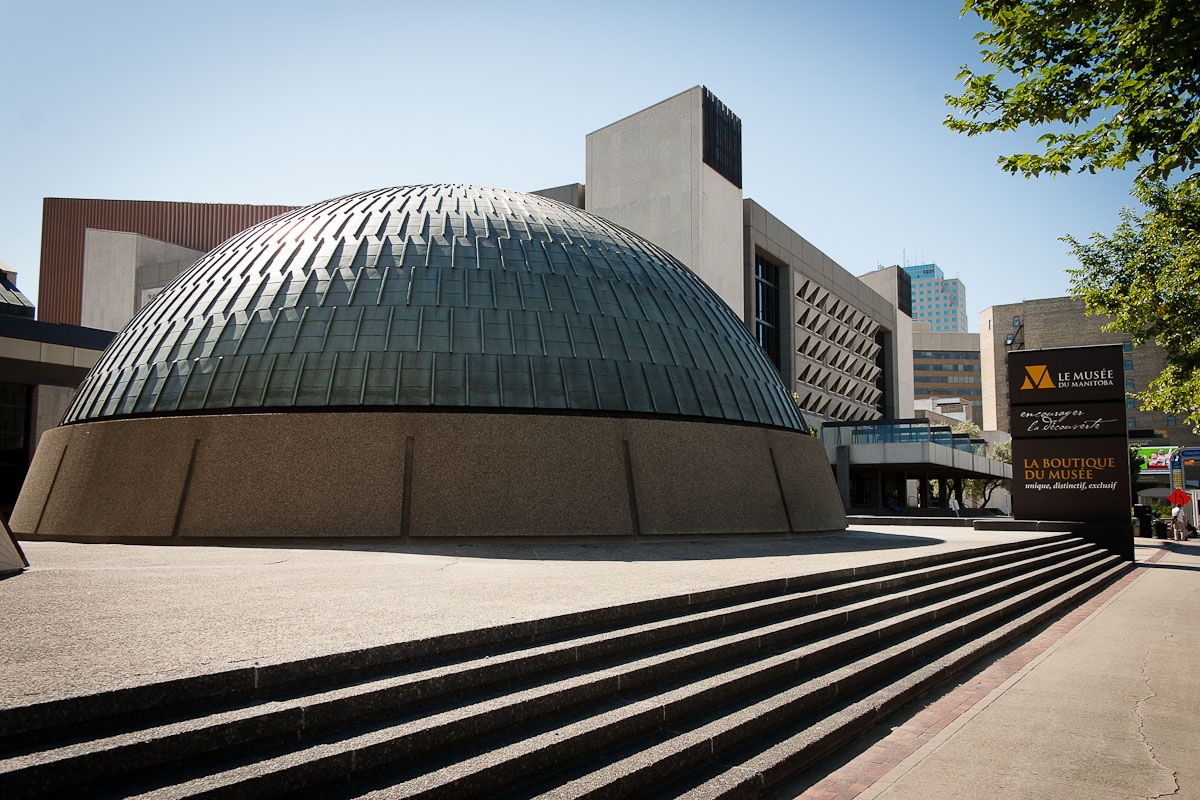 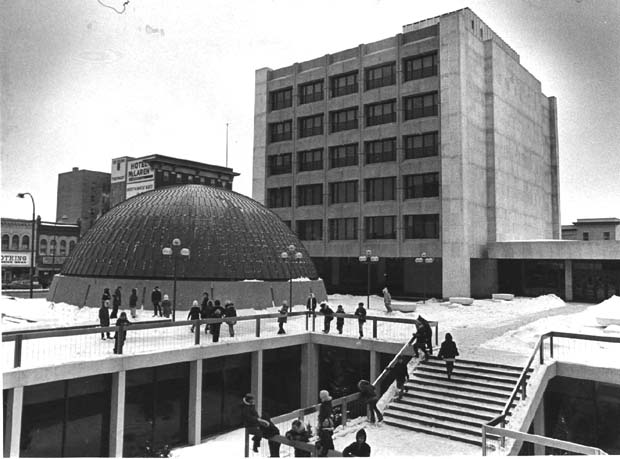 Adjacent to the Centennial Concert Hall, at the corner of Main Street and Rupert Avenue, sits the Manitoba Museum & Planetarium, the province’s most visited paid travel destination. Since 1932 a small museum devoted to nature and history had been housed alongside the Winnipeg Art Gallery at the Winnipeg Civic Auditorium on Memorial Boulevard. In 1961, in light of the discussion of a new Manitoba Centennial Centre, the Manitoba Museum Association started planning a new, much larger location. Four years later the provincial government incorporated two new organizations: the Manitoba Museum of Man and Nature and the Manitoba Planetarium. (The two were joined in July of 1972.) The new facilities were unveiled gradually; a large Planetarium was opened in May of 1968, followed on 15 July 1970 with the inauguration by Her Majesty Queen Elizabeth II of the the Manitoba Museum of Man and Nature Orientation and Grasslands galleries. The collection of the previous Manitoba Museum was the basis for the museum – amongst it the bones of an ancient plesiosaur and a collection of works by pioneering nineteenth-century Canadian artist Paul Kane. Over the years, the original two galleries were joined by spaces devoted to earth history and sea-trading (1973), urban life (1974), the Canadian arctic and sub-arctic (1976), the Boreal forest (1980), the Hudson’s Bay Company collection (2000), Manitoba’s Parklands and mixed-woods area (2003) and ancient sea life (2010).

Like the architecture of the adjacent Concert and City Halls, the design of the Manitoba Museum embraces a clean-lined, modernist approach with a material mix of cream and dark grey masonry, metal and glass. From Main Street, the complex is anchored by a six-storey tower block (built to allow for the addition of six further storeys) framing the southward plaza; to the east, along Rupert Avenue, lies the main section of the museum. Echoing the Civic Centre across the street, this forecourt is paved in a charcoal-toned concrete; like the Administration Building and Council Chambers, the tower and museum sit on a podium of matching dark grey masonry. The museum tower, which houses offices, storage and research facilities, features a broad expanse of Tyndall stone on the west and east facing elevations. Originally the Main Street side carried the name of the museum in bronze lettering, a detail which has since been removed. On the ground level the building features two exposed corridors which guide Main Street pedestrians toward the lobby entrance; windows along this space have been filled in due to security concerns. The north and south façades of the tower first featured deeply inset windows ensconced within a network of sectioned pre-cast dark concrete. A 1995 renovation by Smith Carter Architects and Engineers Incorporated replaced this cladding with grid of composite metallic materials which decoratively rises one floor above the building’s height. In 1995 Smith Carter was responsible for the design of the Alloway Hall addition which created a larger space for travelling exhibits and which filled in much of the museum’s courtyard and Main Street entranceway. Clad in a mix of concrete, glass and composite metallic materials, Alloway Hall is surmounted by roof which repeats the curving lines and copper material of the Planetarium.

Originally incorporating a south-facing wall of glass, the museum’s lobby is paved in charcoal terrazzo, walled with Tyndall stone and bears a ceiling of decorative metal screening. This foyer holds a sales kiosk, entrances to the main museum and two temporary exhibit halls and a gift-shop. The Rupert Street stairwell to the lobby also connects to the building’s lower level, which holds the present Science Gallery (built as Touch the Universe Science Centre, 1986) and Planetarium and also connects to the Concert Hall and underground parking. Like the adjoining tower, the main museum block is largely dressed in Tyndall stone; beyond its dark grey podium, it is also decorated with thin, inset strips of charcoal-toned stone. The initial east terminus of the museum was at Martha Street, though the building now stretches about double that length to Lily Street. The most prominent addition within this area is undoubtedly the tall section holding the ship the Nonsuch. Built in 1974 by the firm of Moody Moore Duncan Rattray Peters Searle Christie, this portion of the museum was later reclad to match the Main Street-facing Alloway Hall. In 2000 the firm of Smith Carter also built an addition on the facility’s east side to house the Hudson’s Bay Archives; this three-storey construction continues the motif of Tyndall stone and cream-toned concrete with decorative charcoal masonry, though laid out in a more asymmetric design which also includes a projecting bay window and fields of roughly finished masonry. The Planetarium, capable of seating 278, is accessed from underground. The building’s form parallels the neighbouring monuments, resting within its setting rather like a decorative sculpture; its metallic copper surface stands out amongst an environment dominated by masonry and recalls the bronze screens of the City Hall.