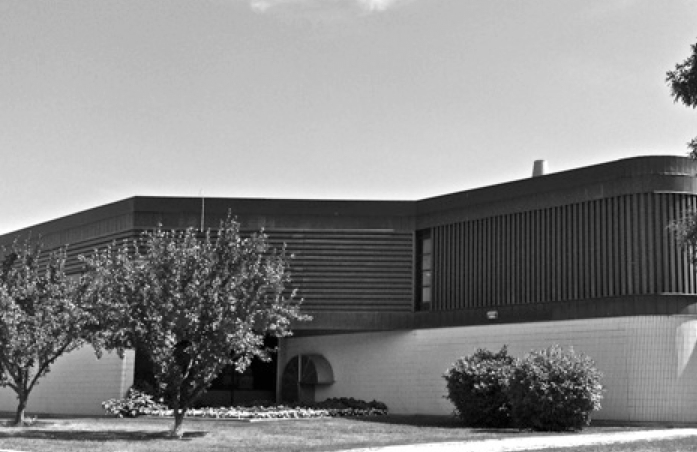 The first new facility the College constructed after this earlier period of development, Building J, is connected to the existing College Building B via a second storey enclosed skywalk, which somewhat inelegantly joins the older complex.

Building J itself is a large and long two-storey construction. The lower floor is mainly composed of light-toned pre-cast concrete blocks bearing vertically incised linear patterning. This section is crowned with a second storey clad in contrasting dark metal siding, which alternates between horizontal and vertical banding. Both floors feature small strip style windows which somewhat recall the earlier campus building’s clerestory windows. Architectural interest was introduced on the south- west corner of the building (which houses a cafeteria on the second level) through a curved segment housing a staircase and an adjacent angled upper tier.

The new building contained space for drafting rooms, classrooms, science labs, lounges and cafeterias and spaces for such departments as autobody, plumbing, painting, decoration, drafting and gas and sprinkler fitting. In 2011 the north side of the building received a two-storey addition to house the growing power engineering program. This section, which accommodates research regarding energy efficiency and environmental sustainability, was constructed to a LEED Silver standard. It is clad in horizontally oriented black metal siding which parallels the rest of the structure and which lends a modernist countenance.