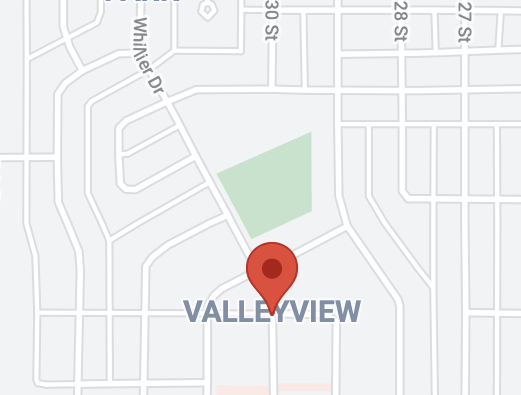 In 1957, the City of Brandon began acquiring land in the Valleyview area. Most land was purchased by negotiation. However, the city began expropriation of at least 6 parcels in the spring of 1958 because the failure to purchase was “holding up rezoning and development”. By this time, planning had proceeded sufficiently that the city was offering 124 building lots and had received 140 applications to purchase.

The first advertisements for houses in Valleyview started appearing in summer 1958. Campbell and Haliburton, agents for Jacobson and Greiner builders, were offering homes “Featuring the very latest conveniences for modern, low cost living” at a starting price of $12,700.

By the fall of 1958, the school superintendent was calling for planning to start on the Valleyfield School. Two “cottage schools” (also referred to as “mobile schools”) were erected in Valleyview as a temporary measure.

Advertising and construction of homes continued through 1959. Early in the year, Brandon city council rejected an application to build two duplexes, saying that “Valleyview will be limited to one family dwellings.”

Street names in the subdivision feature those of historical figures in Brandon’s history. A contest was run by city council, asking school children to propose names of individuals for consideration. Brandon city council made the final selection.

The development of Valleyview by the City of Brandon was not unique. Brandon city council took this same approach in other areas of the city. This led to greater scrutiny by organizations operating in Brandon and to periodic complaints being lodged. In June 1959, the mayor was embroiled in a controversy instigated by the Brandon Real Estate Board over the optioning of 18 lots to a Winnipeg builder. In July of the same year, the Brandon Builders’ Exchange lobbied city council to give priority to local builders when selling lots in Valleyview.