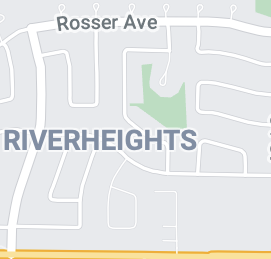 Bounded by Victoria Avenue, 34th Street and Rosser Avenue, the Riverheights subdivision was approved by Brandon City Council in December 1969. The developer was W.W. Fotheringham and Riverheights Development. It was planned to develop the subdivision over a period of 10 years. The timing of Riverheights’s development coincided with the Brandon housing boom that started in 1971 and continued through at least 1974.

The project began with the construction of a shopping mall at the northwest corner of Victoria Avenue and 34th Street in November 1970. The principal tenant was Kmart. Constructed by Bentall Construction of Winnipeg, the centre opened in summer 1971.

Residential construction began in 1971 on Darrach Bay, north of the shopping centre, with homes being offered starting at $15,600. Numbers 21 and 23 were display homes. By 1972, 5 different house plans were on offer. Riverside Development sold lots to builders Jacobson and Greiner, and Headway, who constructed the homes to their own plans.

1973 saw the construction of more houses on Darrach Bay as well as on Magnacca Crescent and along the south side of Rosser Avenue. A third display home was featured at 43 Darrach. The listing realtor, Parkway Realty, described the subdivision as featuring “Thoughtful site planning, excellence of design, careful attention to construction details, all services prepaid.” By the fall of 1973, construction moved to the area west of the shopping centre with 152 homes planned for “2 crescents, 1 bay, 1 boulevard and 1 drive”.

In 1974, Engineered Homes were building houses along Centennial Blvd. It was around this time that the Boreham Park apartments, at Centennial and 34th St. and designed by Winnipeg architecture firm IKOY, were constructed. Another builder, Harvard Homes, began building houses in the western section of Riverheights by January 1975.

In the fall of 1976, approval was sought for the construction of 42 ‘garden homes’ immediately west of the shopping centre on land that was originally planned for more commercial development. Residents of the adjacent Centennial Blvd. and Royal Bay were opposed to the 2 storey apartments and townhouses but approval for Victoria Woods was eventually granted.

Further residential development in the area west of Fotheringham Drive was approval in spring 1977. The plan called for 150 new single family homes, some apartments and 5 acres for a new school. Riverheights school, designed by MCM Architects, opened in late 1979.