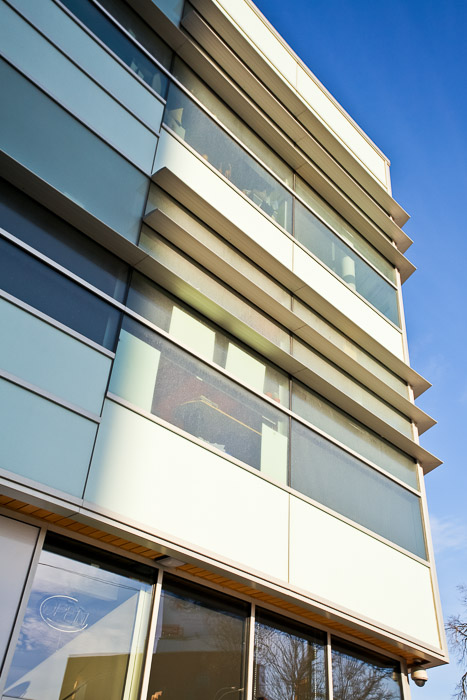 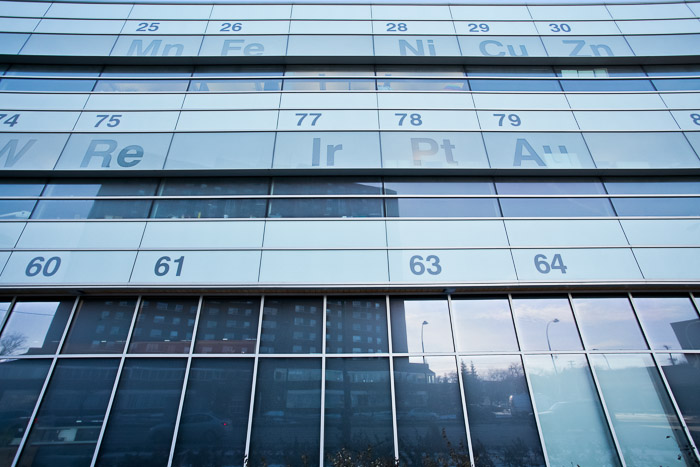 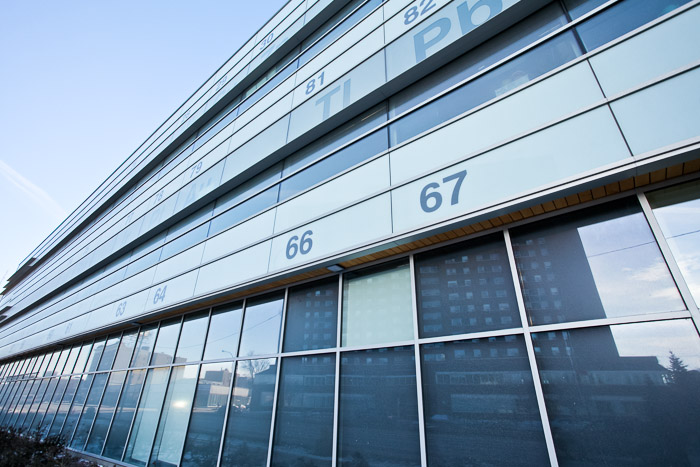 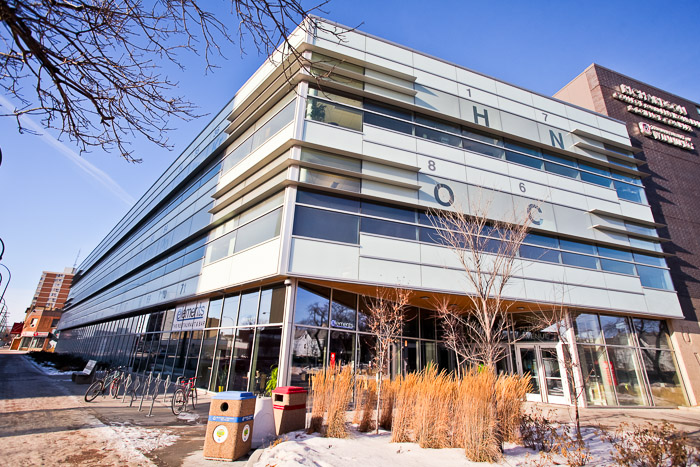 Richardson College for the Environment and Science Complex

Organized as two buildings under a single roof, the north side of the RCES is a four-storey block that houses the facility’s laboratories. Clad in dark brick and steel, its monolithic appearance anchors the building’s composition and is an architectural metaphor for Sir Isaac Newton’s scientific “black box.”

Along Portage Avenue, a two-storey, white-glass facade floats over the sidewalk, its simple horizontal massing reinforcing the urban street edge. High ceilings and south-facing glass walls allow sunlight to penetrate deep inside the building, a key sustainable-design strategy. Solar heat gain is controlled with a translucent white ceramic coating on the glass, applied in a pattern that graphically represents the periodic table laid across the grid of window mullions on the south wall. This expression acts as an outward celebration of the building’s role as an institution of scientific education and research.

Located in their correct positions within the table, the elements that are highlighted each tell a story about the environment and life on Earth. The unique facade stands as a prominent billboard for science and education in the city and will hopefully inspire discussion and awareness in the broader community.

A large plaza flows from the sidewalk at Portage and Langside Street through a transparent ground floor to a dramatic, tree-filled central atrium that will serve as an interior urban courtyard and gathering place for the campus and community.

As a sunlit circulation space connecting the two wings of the facility, the atrium will be an active place of interaction and collaboration. for students and faculty beyond the classroom environment. Grand cantilevered staircases, informal meeting spaces and open study areas are strategically located across the different levels of the open space to encourage personal connections that promote learning through casual discussion and the open exchange of ideas.

The most prominent feature of the atrium is a distinctive wood wall that reaches across its full height on the north side. The narrow wood slats tell a unique story, as they once made up the floor of the historic Winnipeg Roller Rink that occupied the site for more than a century. The wood was carefully dismantled, reconditioned and composed on the wall as a representation of the building’s sustainable character, while making an intimate connection to the memories of generations of Winnipeggers who skated on what was once “Canada’s largest wood floor.”

The wall also expresses the scientific nature of the building as the flared wood panels open to reveal a multicoloured pattern inspired by a DNA microarray, the graphic expression of a cell’s genetic pattern.

The complex is home to the University’s Faculty of Science as well as the Canada Research Chair in Indigenous Science Education, the Canada Research Chair in Inner City Issues and Community Learning and Engagement, the Institute of Urban Studies, the Master’s Program in Development Practice and the Indigenous Studies Program. The building is named for Hartley Richardson, President and CEO of James Richardson & Sons Limited, whose organization and family foundation invested significant funds in the early planning stages of the project.