Join us for a free 90-minute tour of Niakwa Park. Located north of Fermor Avenue, south of the Windsor Park Golf Course and adjacent to the Seine River, Niakwa Park is a park-like neighbourhood developed in the 1950s. The area’s homes were designed by Nikola Zunic, a 1950 graduate of the University of Manitoba School of Architecture. The name Niakwa is derived from an aboriginal term for “winding river” and was earlier applied to the Niakwa County Club, established to the south of the Niakwa Park area in 1921.

The neighbourhood, which includes 160 lots, was deemed a “High Class” project and described as “The most exclusive development in Western Canada” containing “Manitoba’s No. 1 home” – a building that was featured in the August 1956 issue of Canadian Homes and Gardens. Of Niakwa Park architect Nikola Zunic stated that he and his partners attempted to engender a certain diversity in design and to embrace of the park-like terrain, maintaining existing trees. He elaborated: “it was our plan that we wouldn't set up the houses like soldiers.”The initial investment in the neighbourhood was $2,250,000, with homes selling for 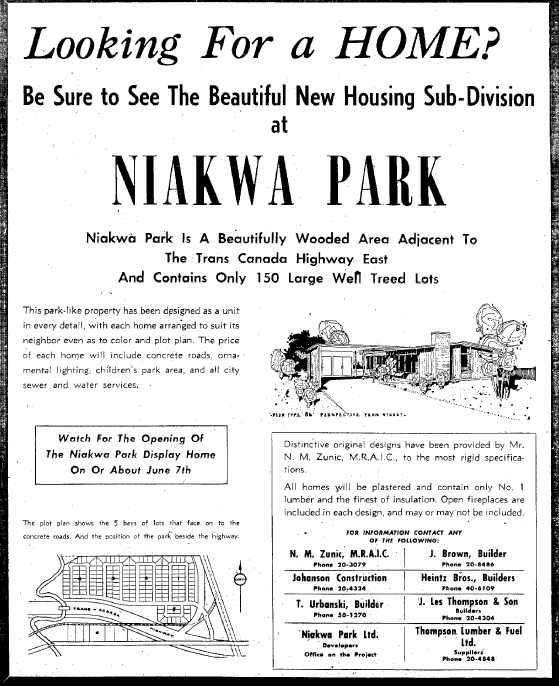