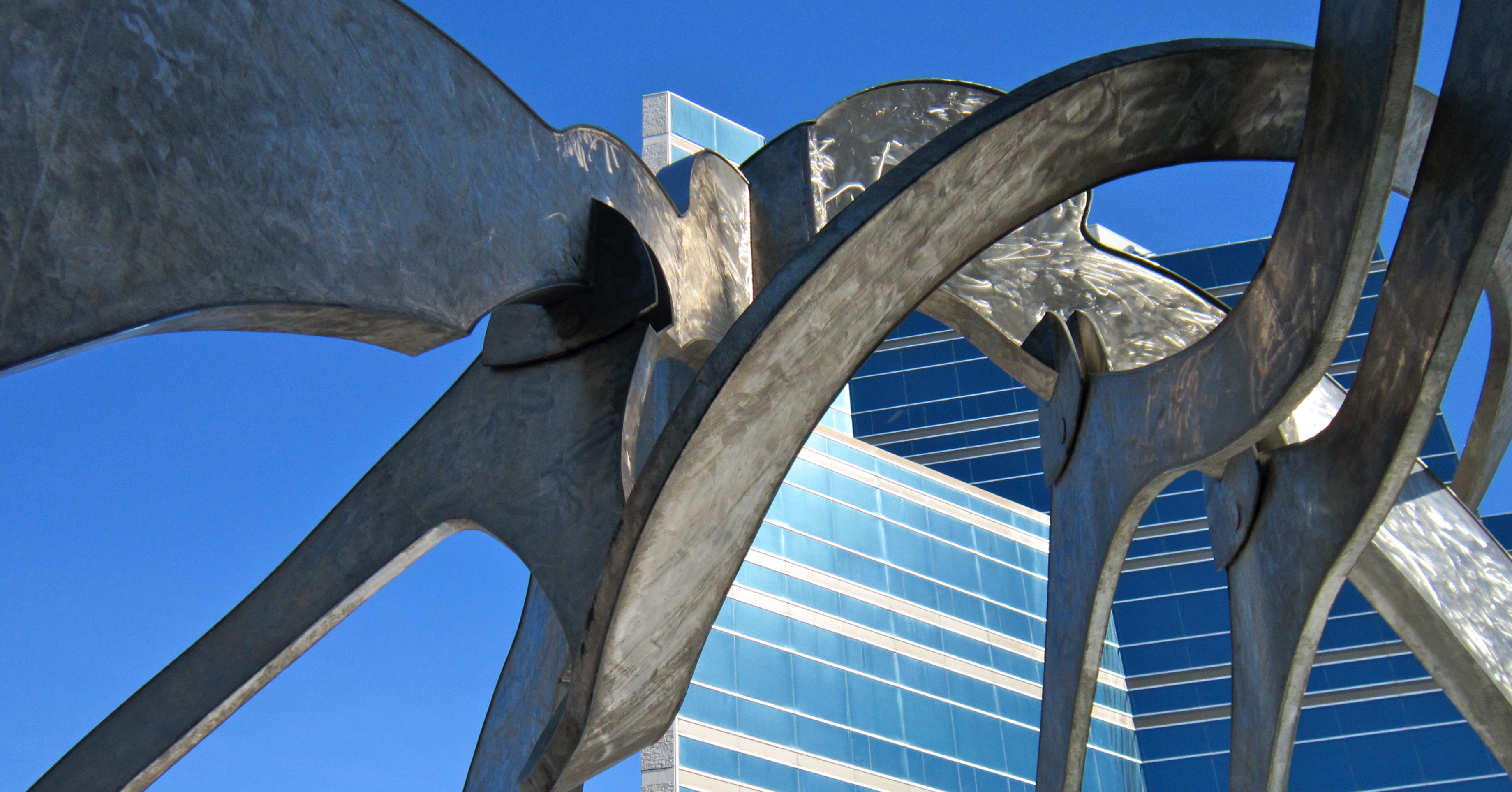 A captivating presence at the intersection of York Avenue and Kennedy Street, “Justice” draws attention with its sparkling materials, sinuous and serpentine forms, and – above all – sheer scale. At nearly ten metres tall and weighing 30,000 pounds, the sculpture stands an impressive artistic contribution to Winnipeg’s cityscape.

Created by local artist Gordon Reeve, the work was one of four public art pieces commissioned as part of the building of the new Law Courts structure at 408 Kennedy Street, completed in 1984. Reeve’s design was inspired in multiple ways by its context. Reeve was led to conceive a piece of art of such a large size in part in response to the openness of this plaza site and the corresponding spare area in front of the neighbouring Norquay Building, to the north across York Avenue. The work’s shapes and kinetic construction likewise draw upon context, namely from the theme of “Justice” appropriate for its Law Courts setting. Consisting of three ribs or legs, the sculpture is topped by three long arms, each taking a different serpentine form. Capable of moving, these arms are balanced such that they can be set in motion by a visitor with little effort, despite their great weight. The conceit draws to mind the metaphoric scales of justice, an image which appears carved in stone at the adjacent historic Law Courts Building (1912-16, 411 Broadway) visible from the site of “Justice.” At the time, Reeve stated of his work: "I wanted to create a structure to carry the metaphor of justice, one that is responsive to the individual, yet enduring and lasting. My hope is that even a child will make it move.” The arms themselves are of a length of nearly ten metres, and while they move under pressure, are designed to return to seek their balance points, reinforcing the theme of balanced justice. Shock absorbers, located at the point where the arms join the legs, control movement. Reeve drew further inspiration for the arched shape of his piece from the shape of the historic Courts’ dome.

Constructed of stainless steel, “Justice” can alternate in tone from a flat grey to scintillating tints of silver and gold. Initial rough work for the sculpture was completed in Sweden, where the best deal for stainless steel was found. Reeve received $48,000 for the piece, but the cost of 30,000 pounds of metal meant that, in essence, Reeve donated his time and effort to the project. Savings were also found through a transportation discount given by CP Rail and contributions from Russelsteel Inc. Reeve’s sculpture was developed in the light of some controversy; the provincial government's art advisory committee selected his work for the site, but a cabinet committee rejected it worried that public reception would not be warm.