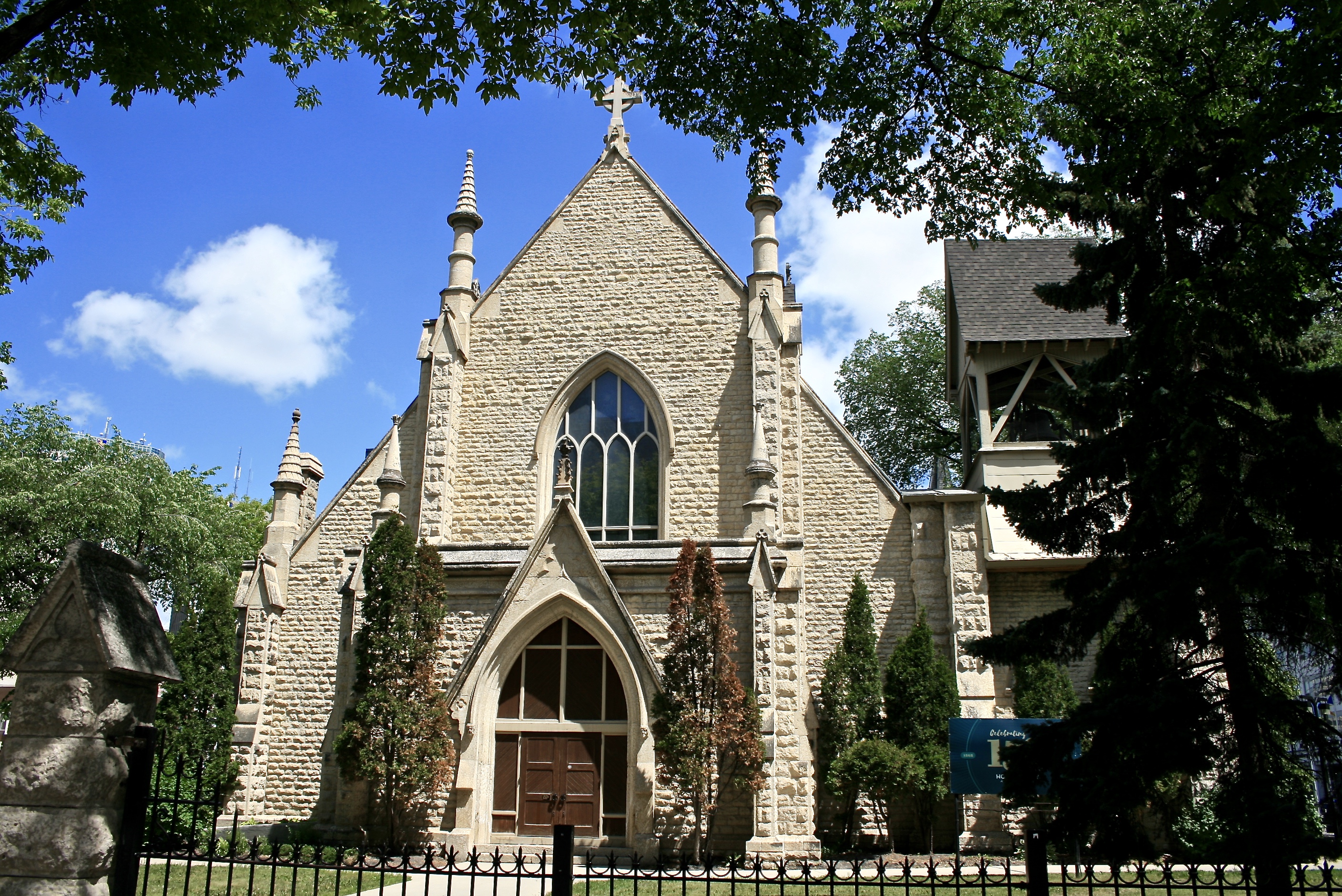 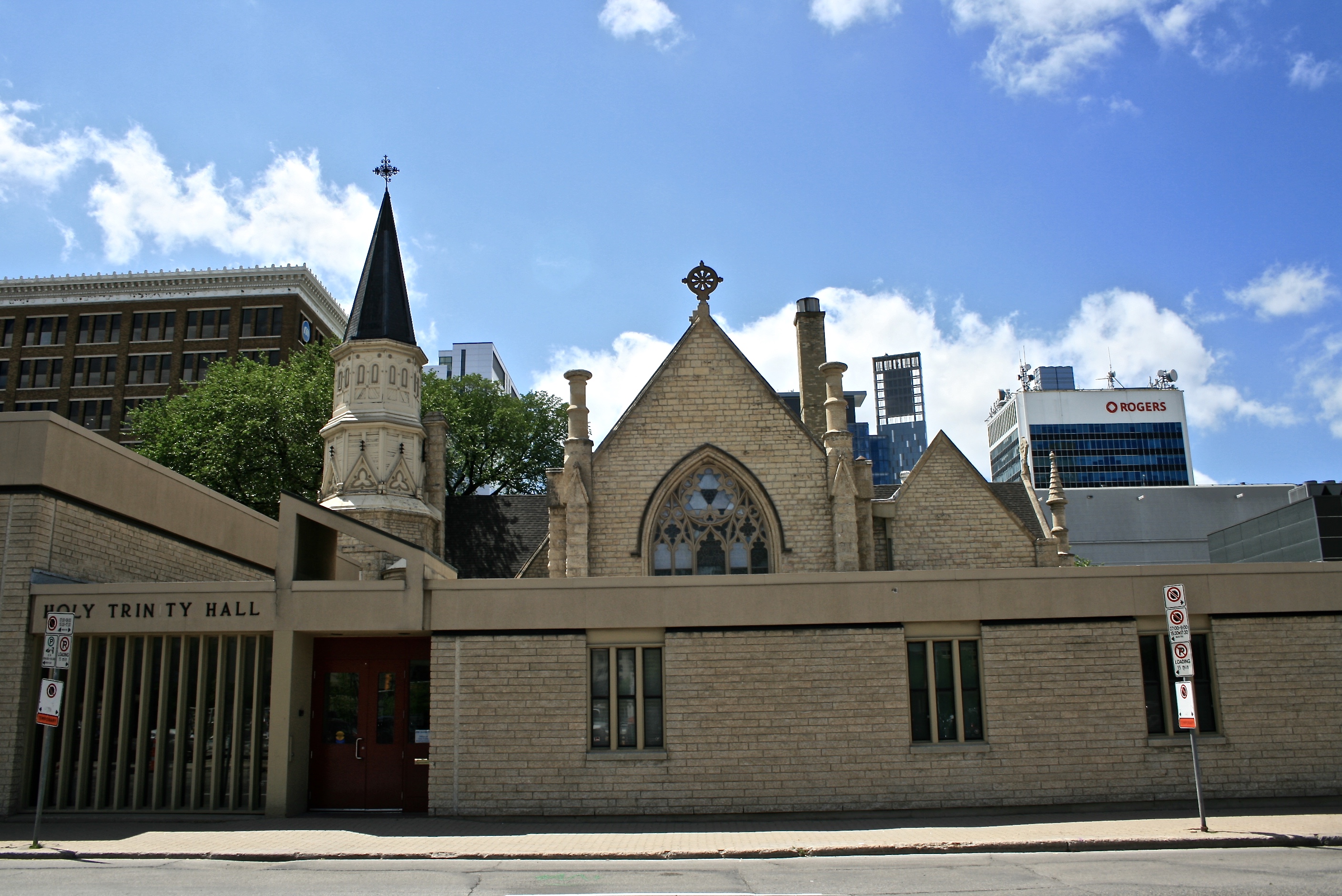 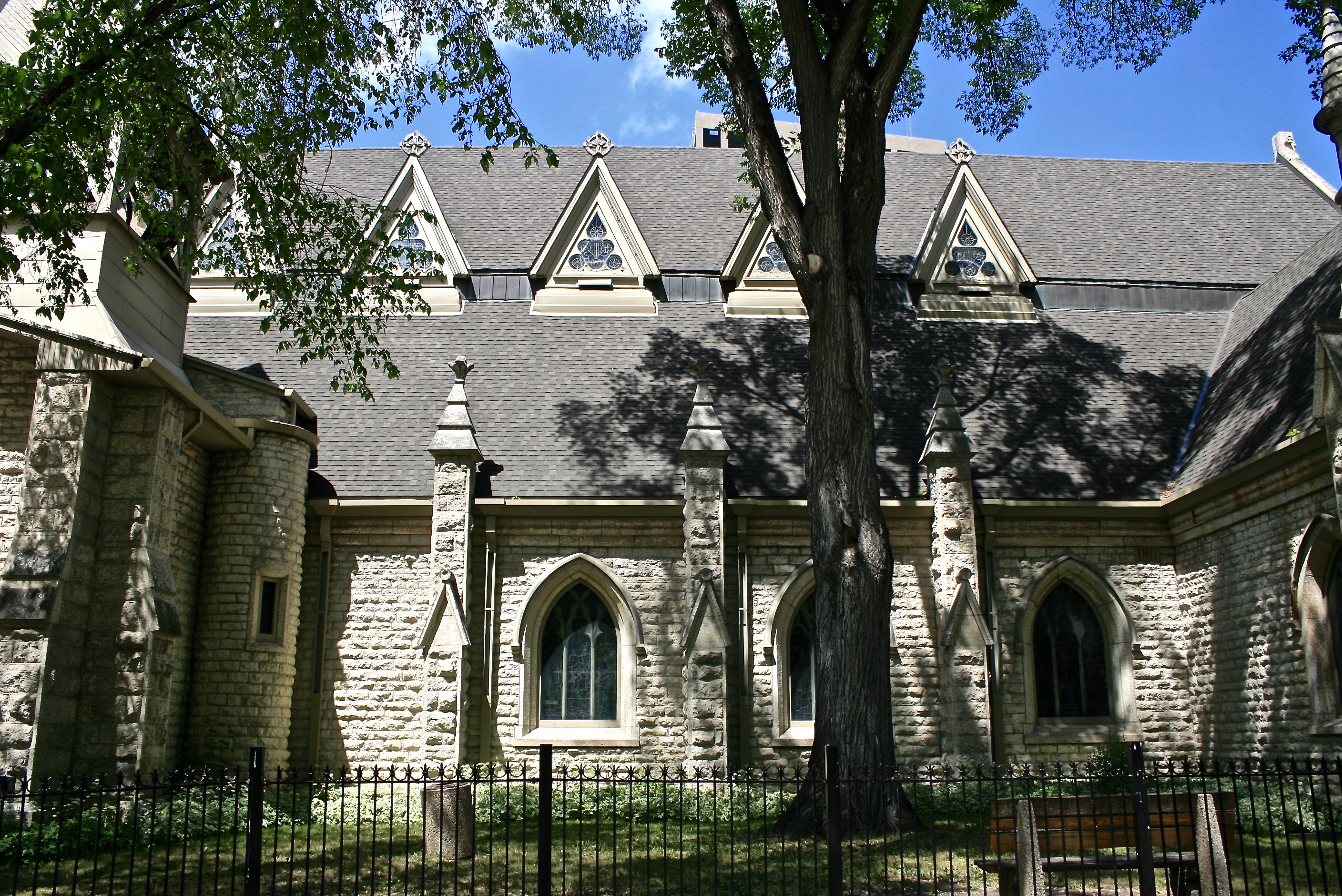 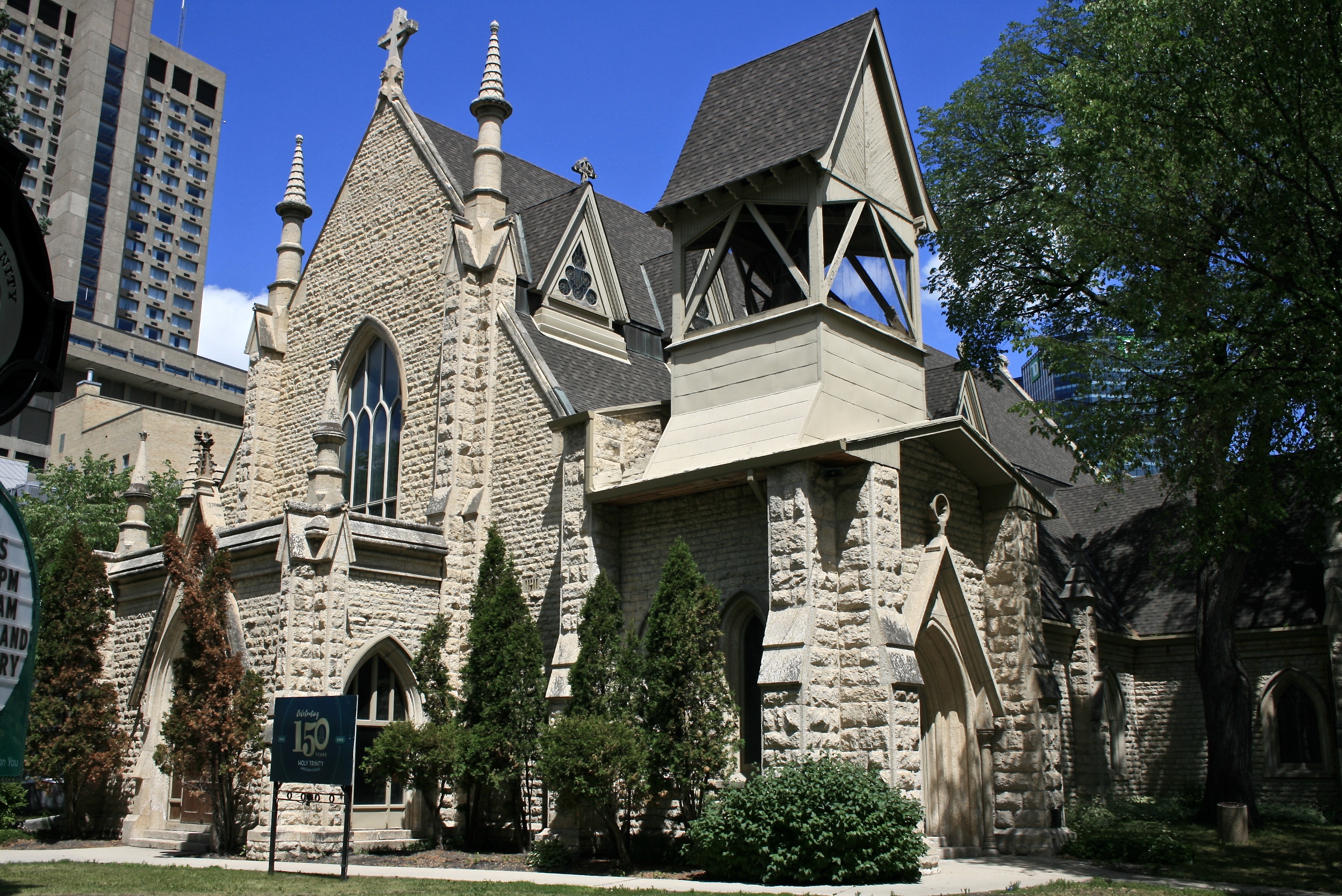 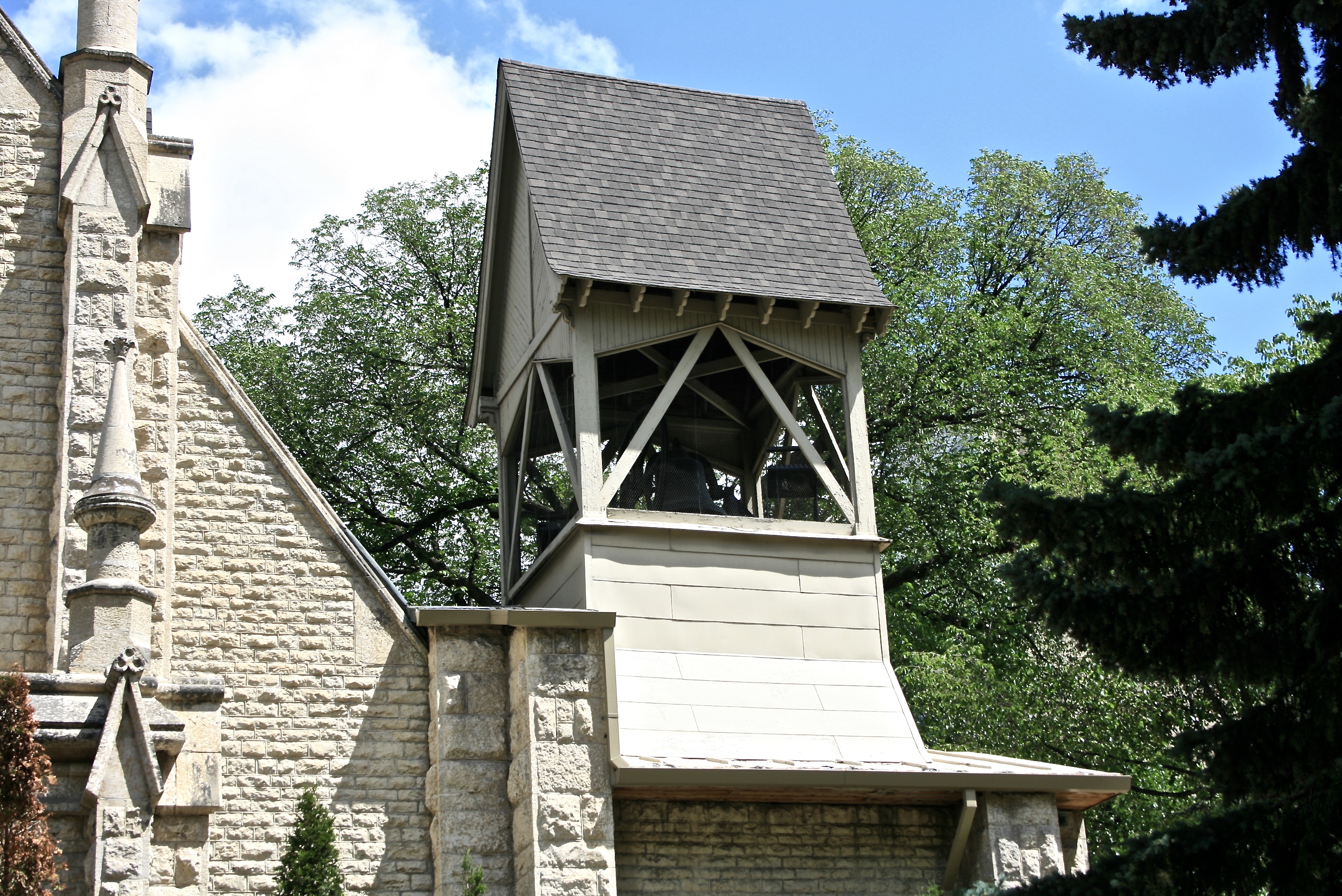 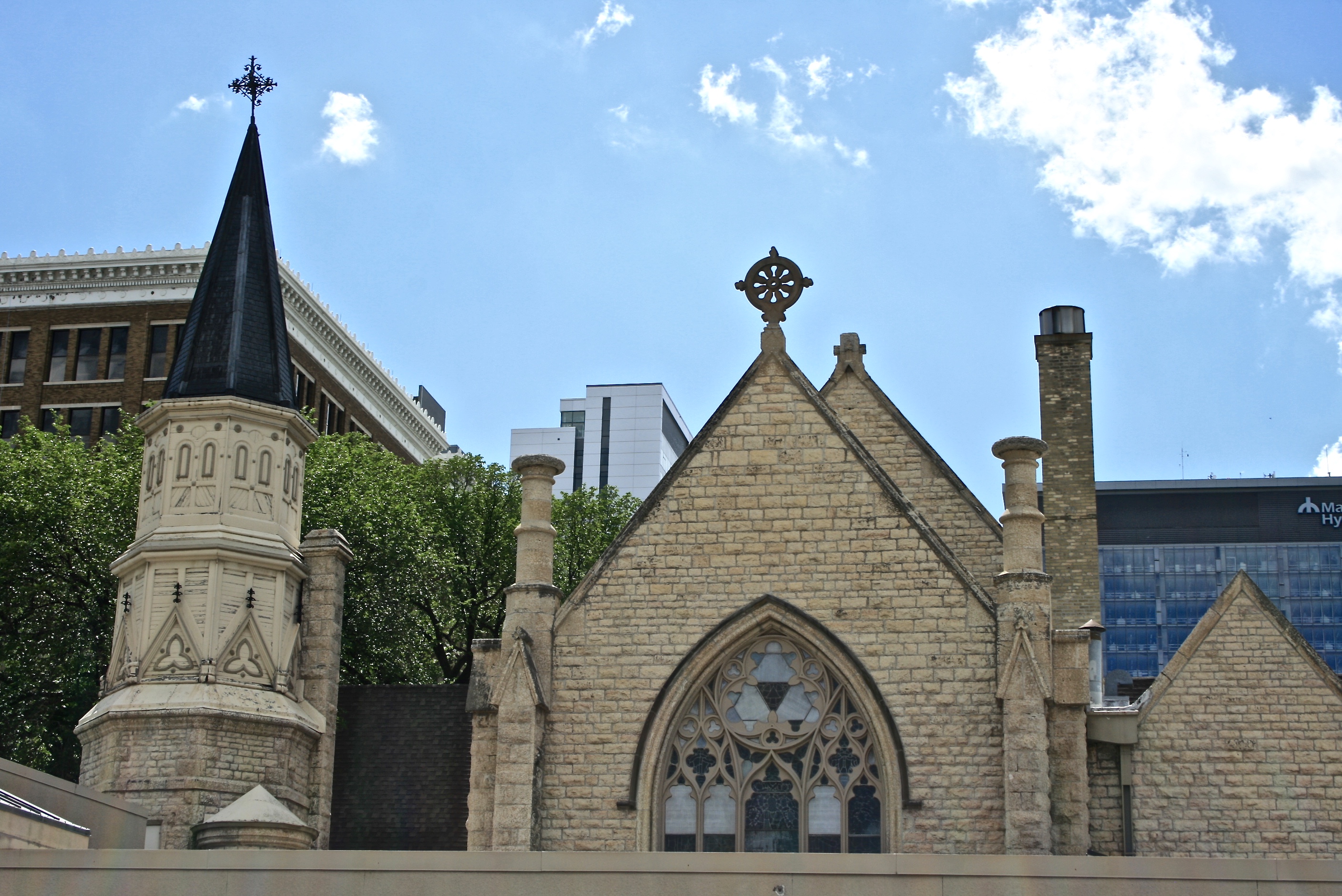 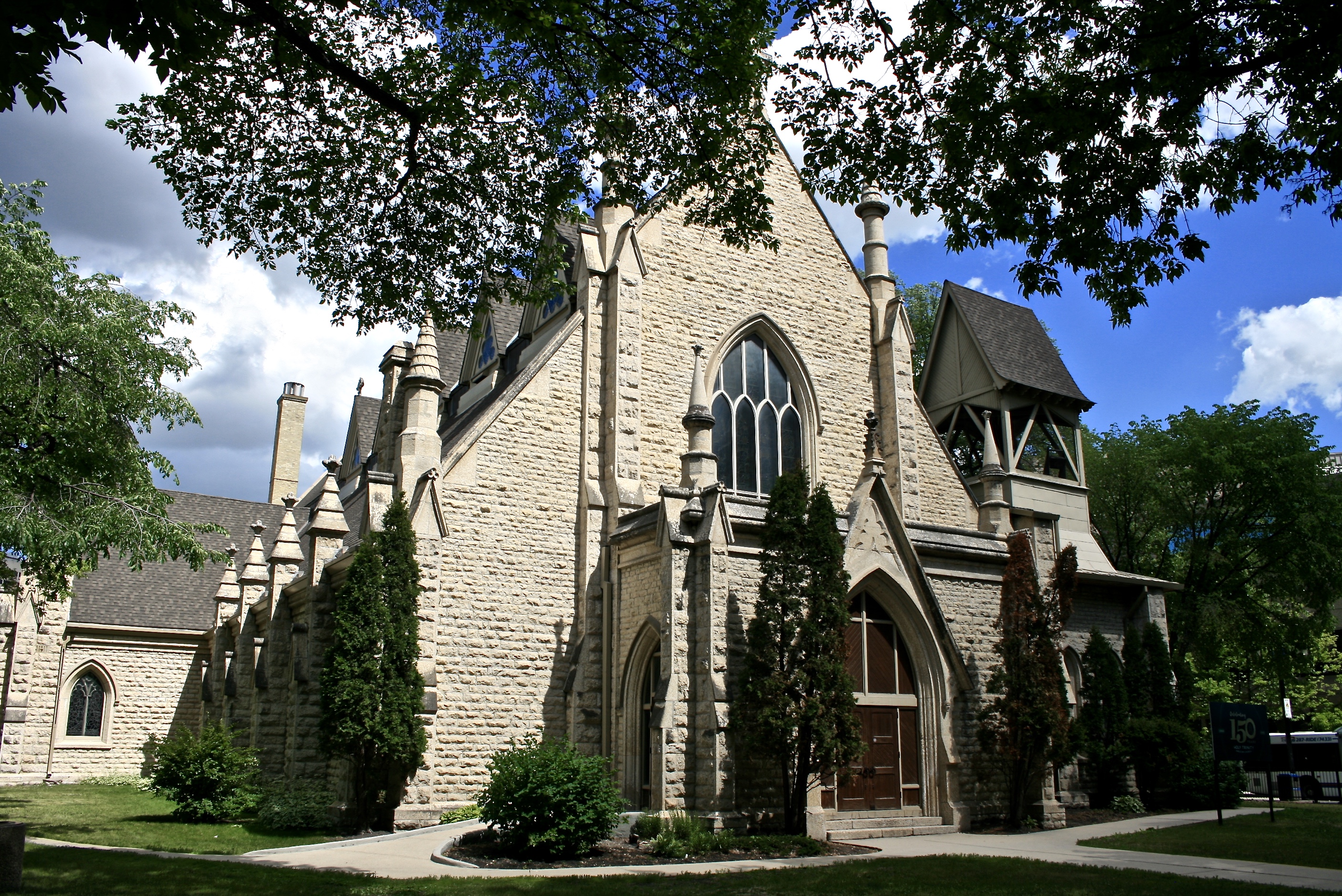 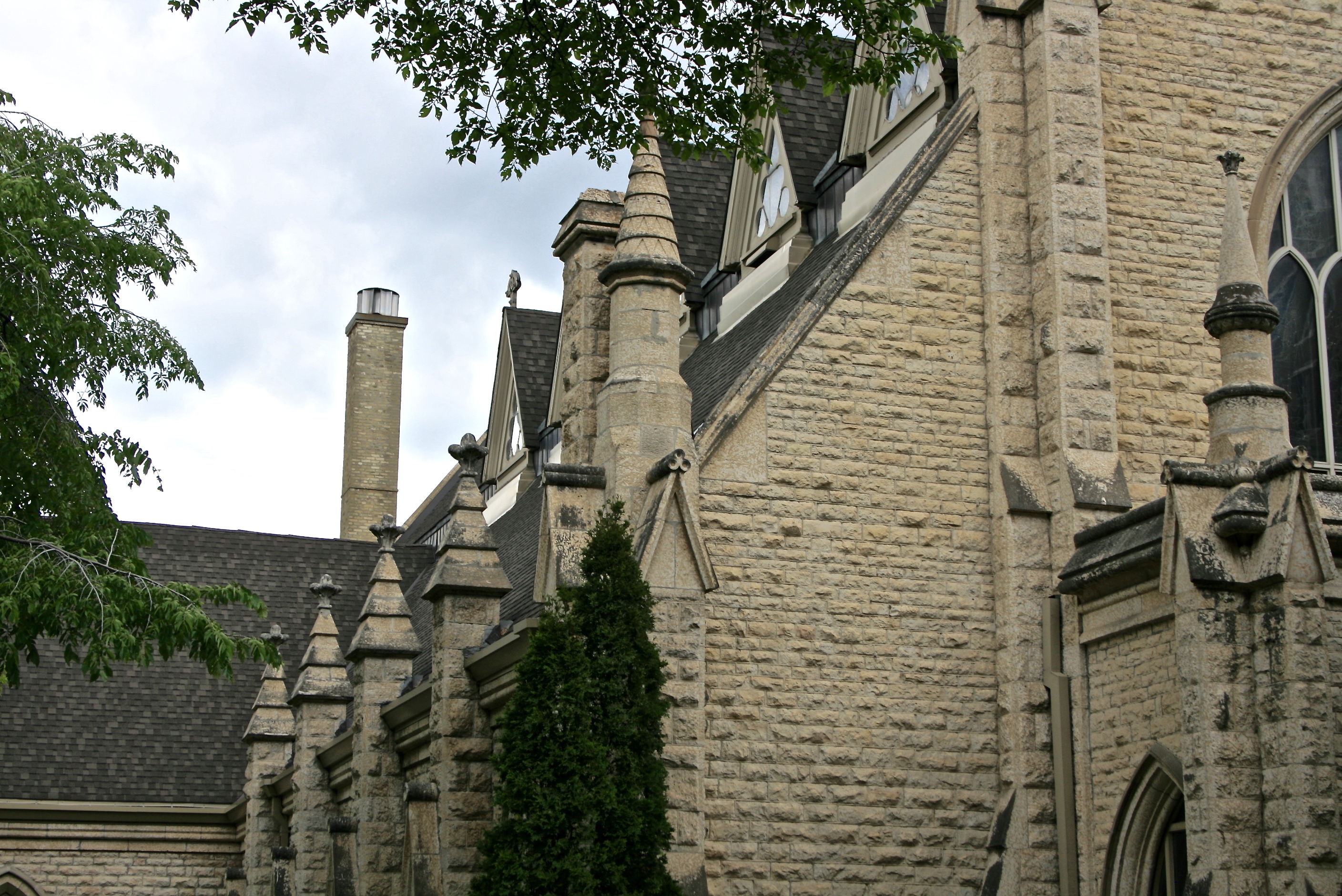 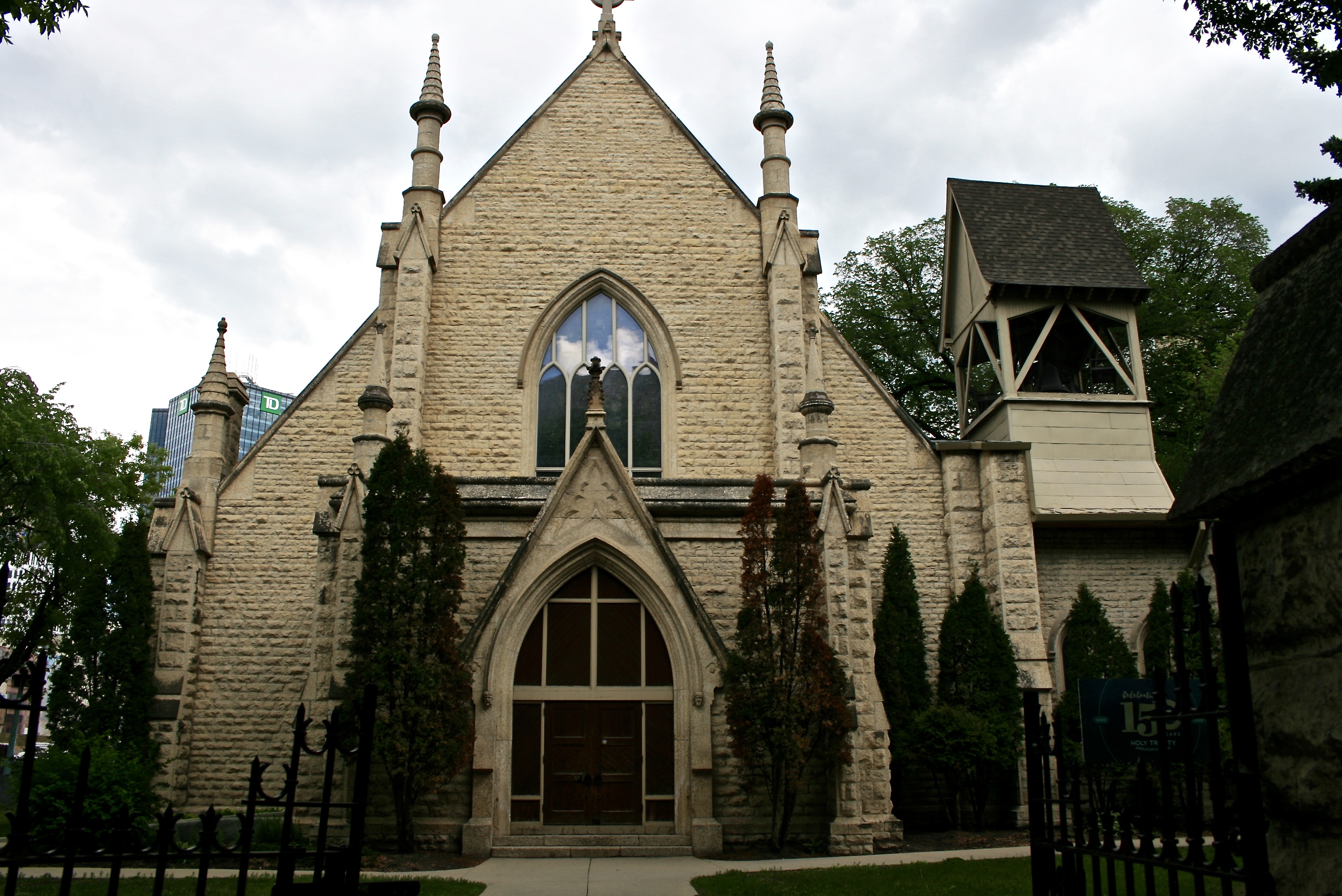 The Holy Trinity Anglican Church, 256 Smith Street, first opened its doors on July 28th, 1884. The construction began for the church in 1883 and was a replacement for the old wooden church at 246 Portage Avenue.

The church was designed by Charles H. Wheeler in the gothic revival style with limestone as a primary material. Wheeler used the traditional cruciform floor plan, common with churches. Throughout the building there are twenty-six beautiful stained glass windows, dark wooden pews, and arching hammer beam ceilings. Wheeler's design also included the details of the stained glass. The exterior design of the building features architectural details such as the dormer clerestory windows, buttresses, and a stone finial. Wheeler had initially planned for a tower with a spire, but it was never constructed. The building is also home to a courtyard which provides a green space in the ever growing industrial downtown area. The church bell was donated in 1887 by Mrs. H. H. Smith. The bell weighed 1,556 pounds and it was decided that the first to ring the new bell would be Mrs Smith who, still holding on to the rope, was pulled up off of her feet as the bell swung.

The parish hall was constructed in the 1890s and was two storeys tall with a raised basement. The hall blocked the natural light which should have been streaming through the Eastern windows of the church. An extension would bring the hall to the corner of Graham Avenue and Smith Street. After the extension, the hall was big enough to hold a gymnasium, assembly hall, choir rooms, administrative offices, the rector’s room, Sunday school, lecture rooms, a library, bookstore, and kitchen. Despite the halls many uses and size, it was decided that a redesign was needed. The redesign was aimed to allow for the Eastern elevation of the church to be visible so that the gothic architecture could be admired, but also to allow for light to come through the Eastern windows. The much needed redesign was also meant to make the church and parish hall a much more cohesive pair as the two buildings were made with very different materials and looked disjunct.

The new parish hall was constructed between 1966 and 1967 by De Vuyst Construction Ltd and designed by Smith Carter Searle. Although De Vuyst Construction Ltd was the contractor for the buidling, the piling work was done by Badry Engineering. Immediately after the demolition of the old hall a new one storey parish hall was constructed. The building was designed so that it was divided in two parts; the office and the hall. The exterior was done in Tyndall stone to match the gothic church, which had been repainted to its original colour. The new parish hall had minimal ornamentation as the main focus of the building was meant to be the 18th century gothic church. The overall cost for the new parish hall came out to $400,000.

By 1912 the church had a four manual pipe organ built by the Canadian Pipe Organ Company of St. Hyacinthe, Quebec. The organ has over 4,000 pipes and 67 stopes and still remains in the church. The organ had to be refurbished in the summer of 1993. Another addition to the 1884 church is the wheel chair ramp located to the left of the Donald Street entrance. The lot was added to with the acquisition of the neighbouring parking lot in 1940.

The well maintained church is recognized as one of the oldest Anglican Churches in the West. The church was designated as a national historic site which was commemorated with a plaque that sits at the gate of the Donald Street entrance. That’s not the only plaque which is housed on the churches grounds. In 1921 a plaque created by Alfred Howell was unveiled to commemorate parishioners who lost their lives while serving in the first world war. After the second world war another plaque was added.