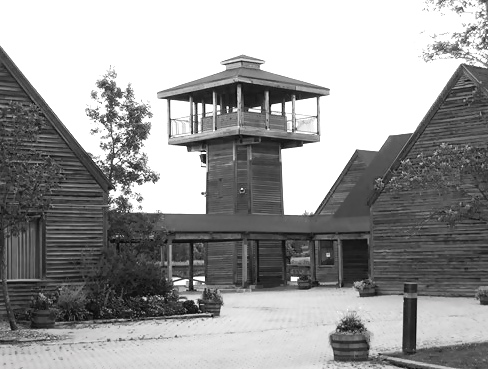 On the site of a former landfill, Kilcona Park was created as a new large-scale recreation area, with a man-made lake, in north-eastern Winnipeg. At its heart was erected this six structure facility intended as a visitor centre and anchor for a number of leisure activities, including boating, golf, tennis, skiing, skating and snow-shoeing. The structures were clad in wood and assumed vernacular-inspired forms, creating a traditional, village-like feel, one suited to dock and harbour functions. With a greater sense of historicity, the complex's design echoes IKOY's earlier work at the Westboine Co-operative Housing development. The project was the result of a competition win. It's design has been characterized as harkening to the Icelandic settlements on the western shore of Lake Winnipeg. The project's development was conditioned by a site plan developed by the Lombard North Group Ltd. in 1977.

In their text "Contemporary Canadian Architecture", Ruth Cawker and William Bernstein character the complex thusly: 'Located on the outskirts of Winnipeg in the midst of industrial and undeveloped lands is Harbourview, a municipal recreation complex. Harbourview is a picturesque village of buildings that compartmentalize various aspects of a sports-oriented programme: a golfers' pro shop, locker rooms, restaurant, and lookout tower. These components are linked into a larger ensemble by a covered walkway. Belying its quaint seaside village image, Harbour View's wood structure is a pre-manufactured house truss system. In the words of its designer, Ron Keenberg, "what we are striving for is machine craftsmanship, not handcraft. We try to use off-the-shelf components wherever possible. Craftsmanship comes from assembly." The assembly, technically as well as formally, creates the impression of a past that has been incompletely retrieved. The repetitive pairs of timber light standards along the dock conjure up the rustic images of power or telegraph links – images but historically poignant in the prairie countryside – but their toy-railway scale and visible finite make clear that this is a fragmentary, totemic image, not to be taken at face value. In the same way, the wood clapboard and heavy timbers conjure up the image of a farm, but the dark glass of the windows, the dark finishes on sash and muntin bars make the windows look empty, as if the buildings had been abandoned. Inside, smooth white walls, the I painted pre-fab wood trusses and wood-framed windows reverse the illusion: we are in a modern space, in process of construction. If Harbourview, as one observer commented, "evokes a history the project has never known," it also points to a wittily ironic future for architectural symbolism and technology.'