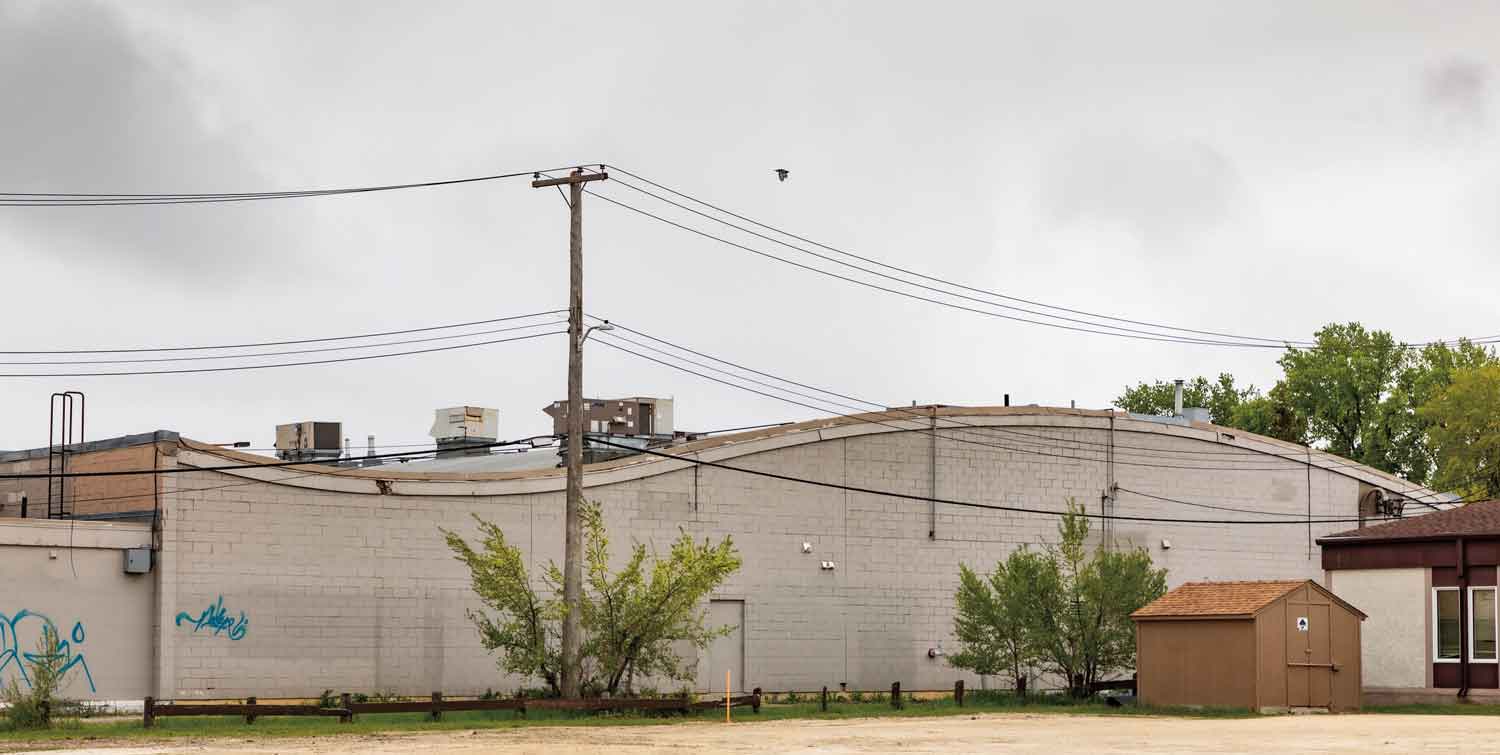 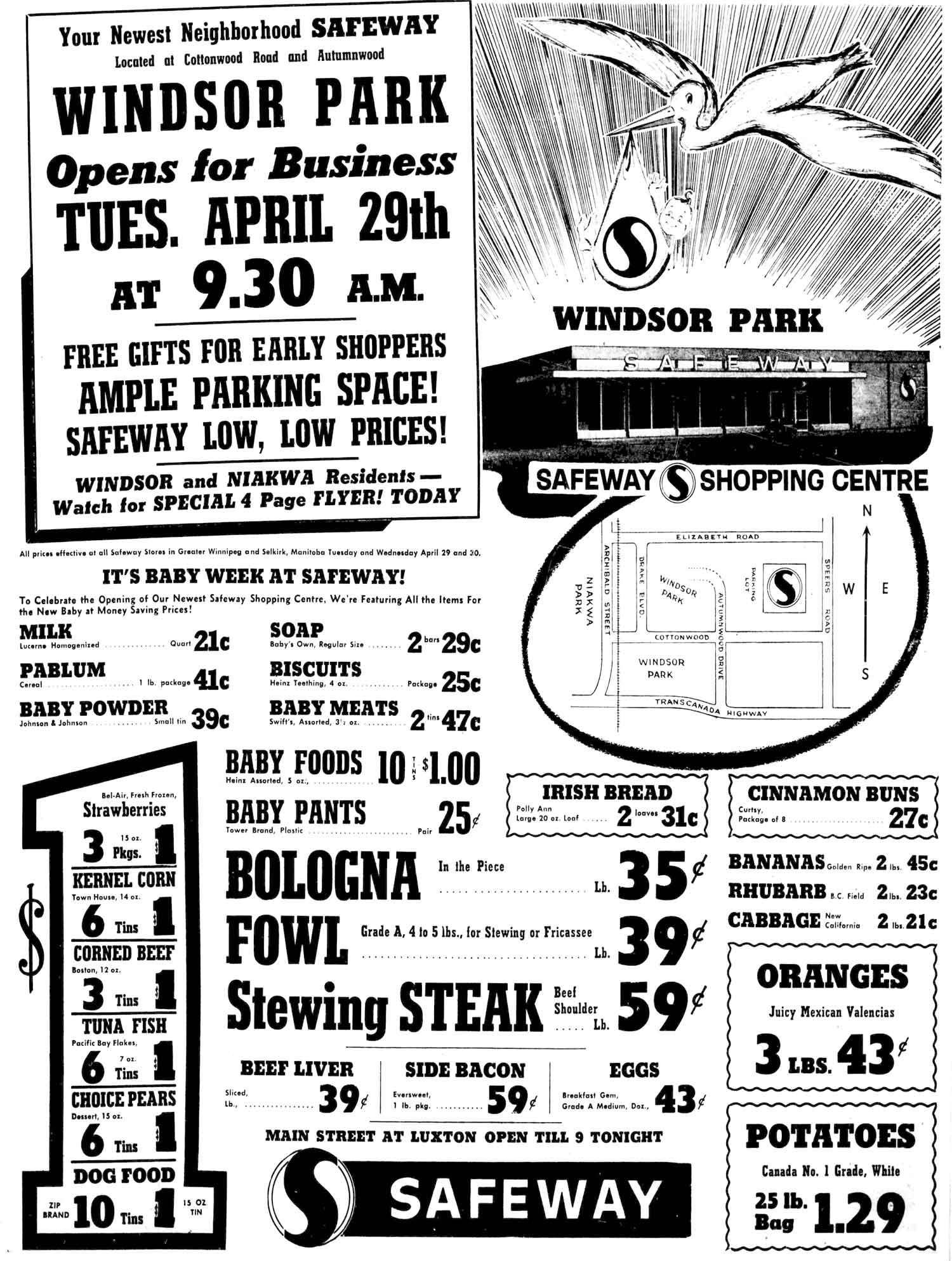 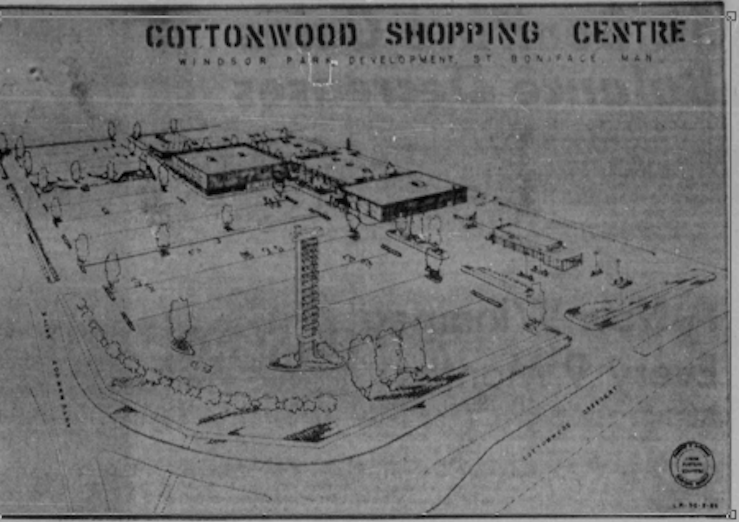 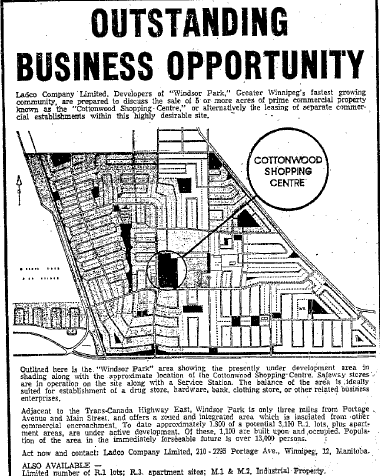 Modern shopping centres were built in Windsor Park in response to growing consumer demand. In 1956, J. Raymond, president of Cottonwood Shopping Centres Ltd., announced the construction of a shopping centre at the heart of the development. Public relations and management for the project were done by I. B. Margolese and Co. Ltd., while the design was assembled by L. Plotkin and Associates. Costing just over $1 million, the modern shopping centre would be centrally located within the development, rather than staggering stores along a commercial street. Its many shops included a large, modern Safeway grocery market, a planned department store, a medical centre, a bank, a beauty salon, a clothing store, and a bicycle repair shop. The centre also featured convenient local parking for five-hundred cars and a canopied area to shield shoppers as they ventured between stores.

Construction was planned to begin spring 1957 and be completed by September 1, 1957. Located amongst schools, churches, and other public facilities, the Cottonwood Shopping Centre embodied the post-war ideal of a centrally located public space that integrated commerce with civic activity. Three such centralized shopping locations were built in Windsor Park, located at the corner of Cottonwood Road and Autumnwood Drive (Cottonwood Shopping Centre), the corner of Elizabeth Road and Drake Boulevard (Windsor Park Shopping Centre), and Westmount Drive at Paterson Street (Westmount Plaza). Paradoxically, decentralized corner stores were part of the original plan, and placed strategically throughout the development. The buildings were arranged at a right angle within the lot, with different stores stretched across the north and east sides, and an apartment block in the north-east corner. The exception to this was a small corner store along the west side, as well as Fire Hall No. 4 and the Windsor Park Library in the south-west corner.

The most significant business located within the Cottonwood Shopping Centre was the Safeway supermarket on the north side of the mall. With a price-tag of $150,000 and occupying 10,800 square-feet, this Safeway was touted as being the most modern location in western Canada. The design was originally a modest brick construction, with floor to ceiling windows and what appeared to be a metal canopy, both on the left side of the building’s façade extending around the corner. This building was completed in 1958.

Renovations to the Safeway were completed in February 1964. At that time, Safeway sought to standardize the “Marina style” across all their stores. The style was named after the first location built to the specifications on Mariana Boulevard, San Francisco, in 1959. The features included floor-to-ceiling windows along the façade, as well as a curved roofline, sometimes referred to as a gull-wing. The design was ultimately more form than function, designed to catch the attention of drivers in an increasingly car-centric world, as well as make Safeway stores more identifiable than other chains. In some regards, this store allowed Windsor Park to add a California architecture firm to its roster of designers, as the Marina style Safeways were designed by Wurster, Bernardi & Emmons.