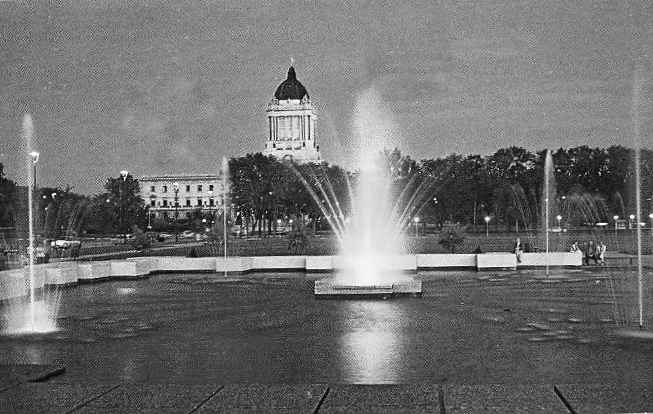 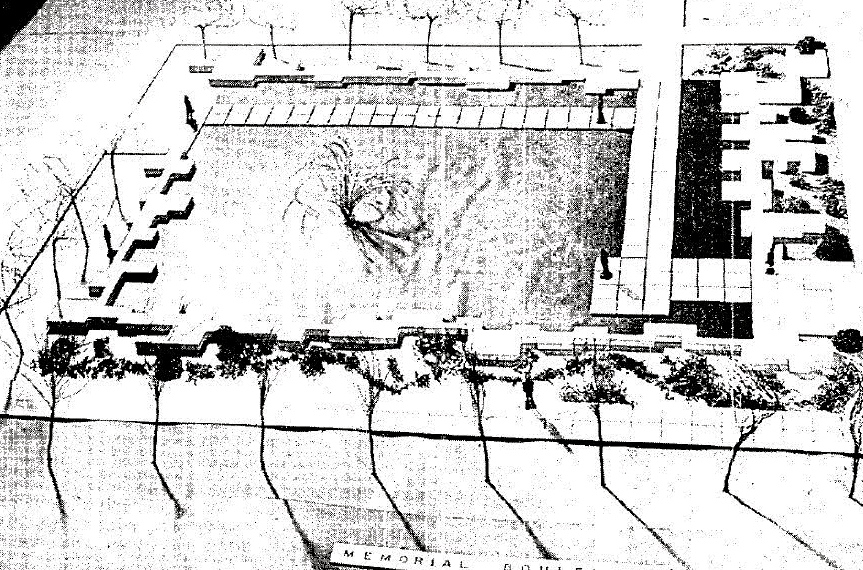 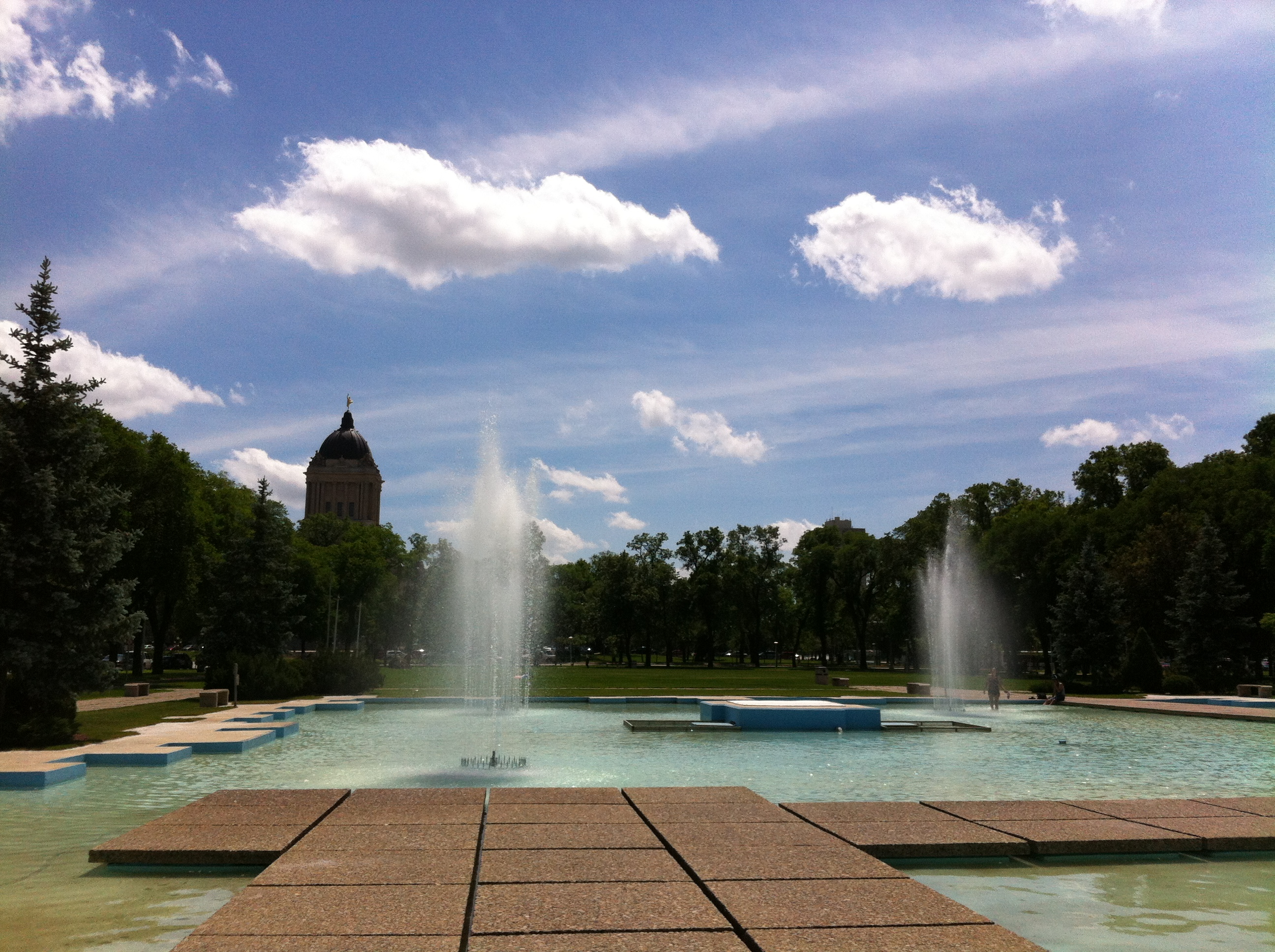 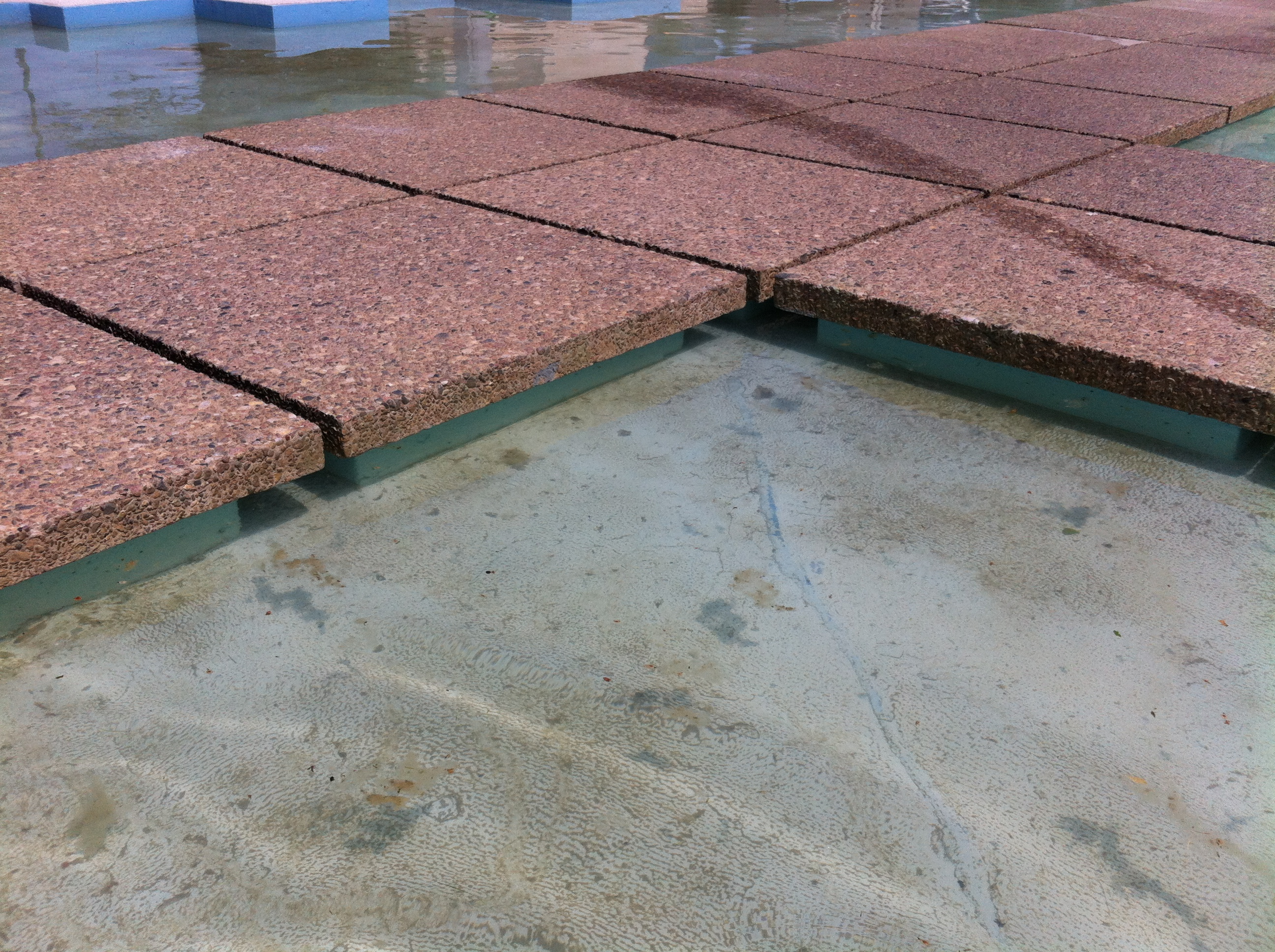 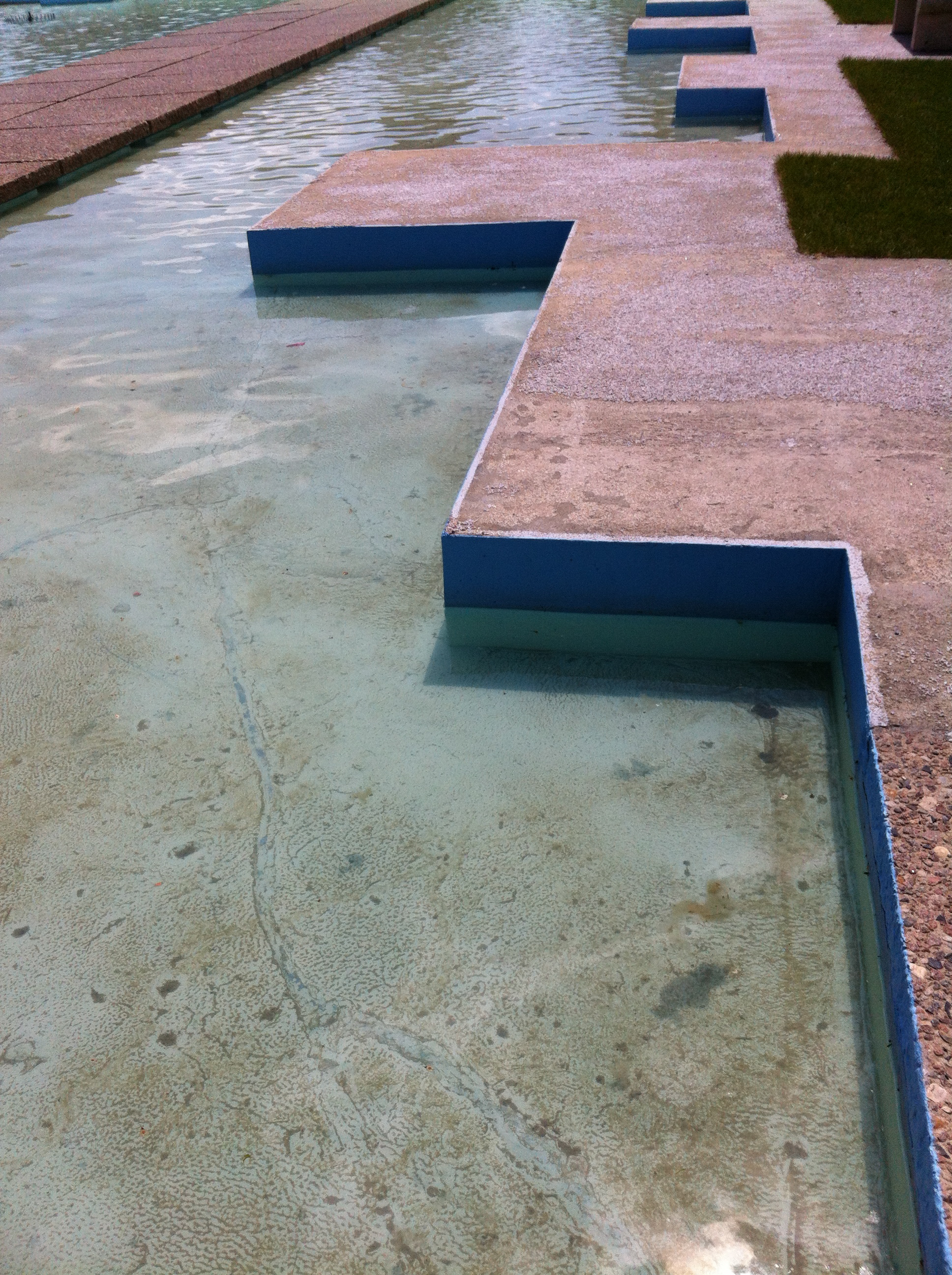 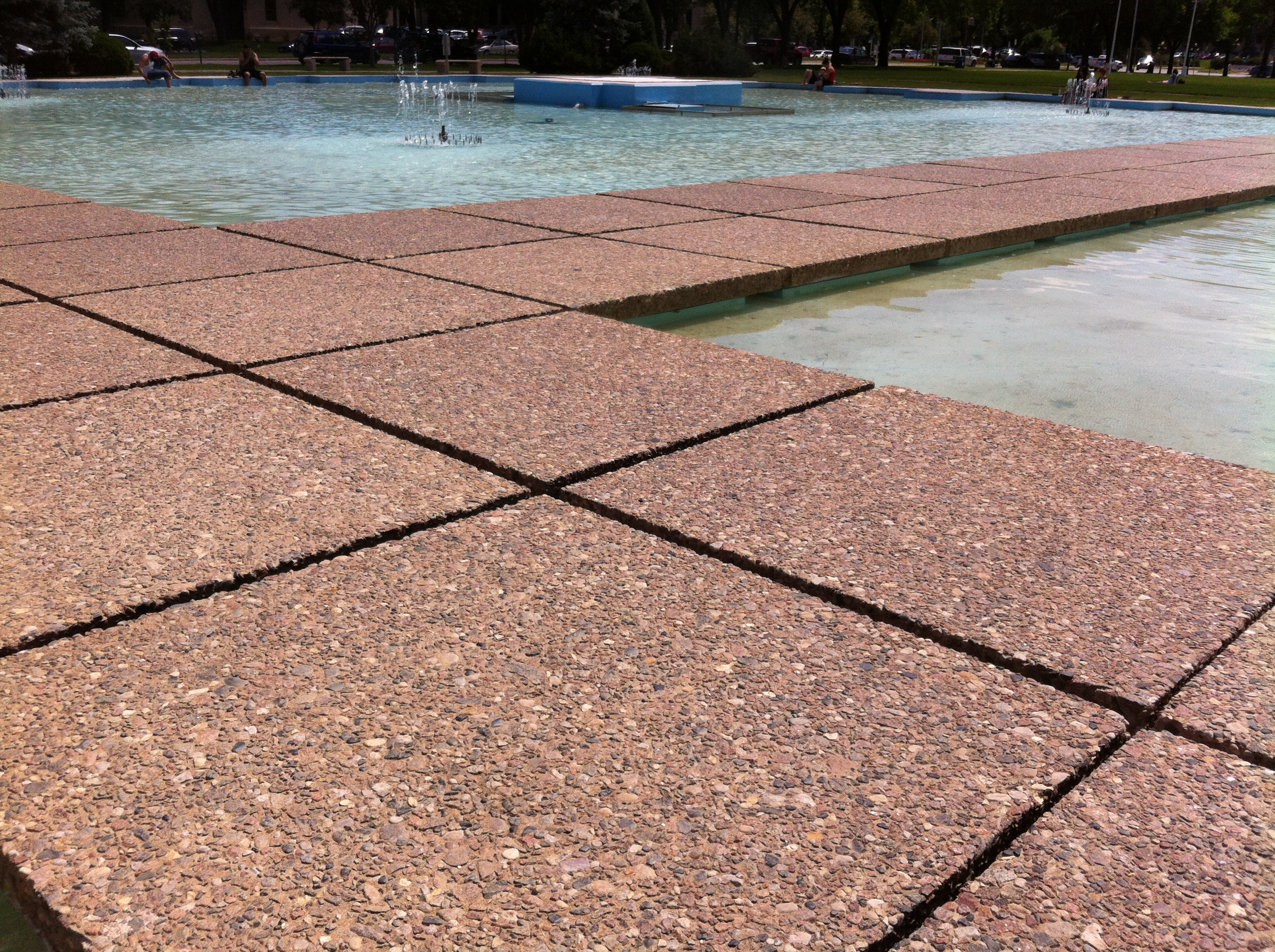 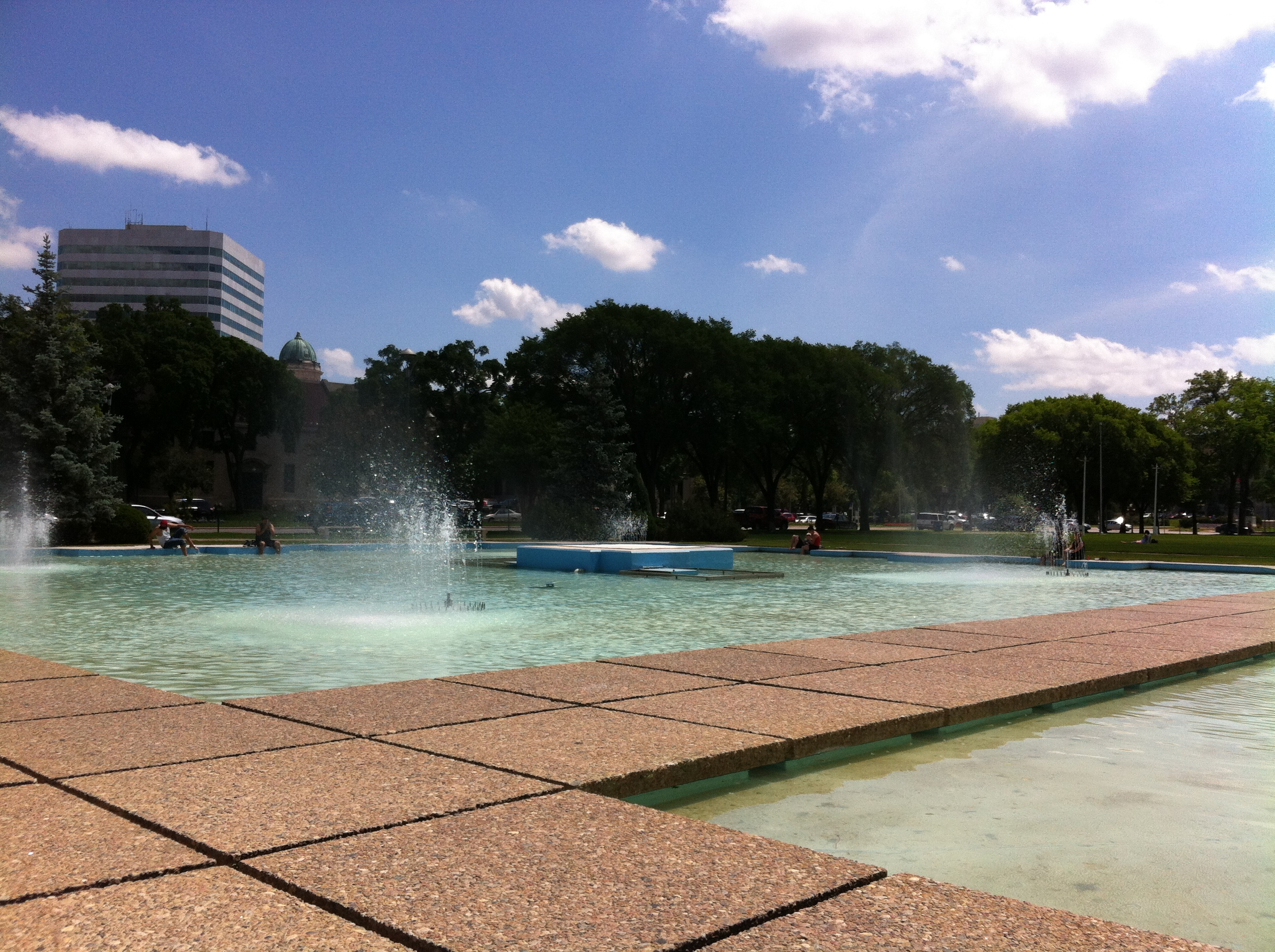 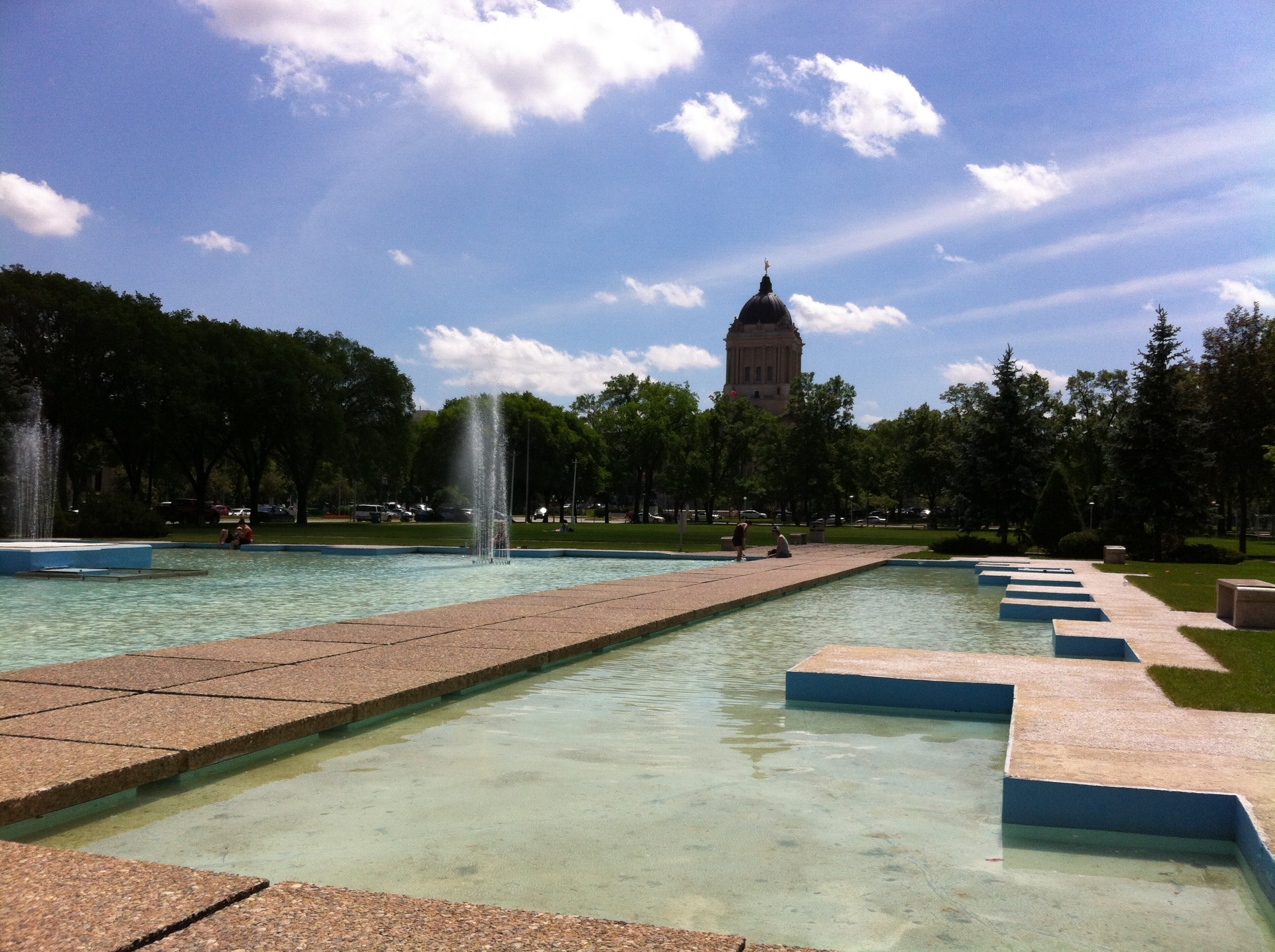 Winnipeg’s City Hydro Fountain was officially opened on September 28, 1962 at the inauguration and commemoration of the public garden in which it sits, Memorial Park. The fountain was constructed to honour the fiftieth anniversary of Winnipeg Hydro, the local city owned and operated electric utility that had begun operations in 1911.

The fountain, with dimensions of approximately 40 x 34 metres, was designed to highlight a “dancing fountain” featuring jets capable of launching water 10 metres high, complemented by coloured lights. The scheme for the fountain, devised by Cameron Man, was modernist in nature, with a low and wide emphasis that highlighted the tall surges of water and which invites the approach of passers-by. This feeling of welcome is accentuated by the “floating” concrete paths that allow pedestrians to walk across the fountain directly. Irregular edges decorate the pool’s boundaries. The wide horizontality of the design underlines the breadth of the fountain's park home, responding to the impressive scale of an area commonly and grandly known during the mid-twentieth century as The Mall.

Construction of the fountain was made more difficult by the remains of a manure yard on the site, as well as the former Colony Creek. A great deal of money for the fountain was spent on site preparation, which meant that the fountain’s initially planned vertical elements and limestone were not affordable.

Memorial Park was previously the site of the Broadway campus of the University of Manitoba. Following the consolidation of the university in its south Winnipeg Fort Garry campus, the area was briefly considered as a home for Winnipeg’s new City Hall, which ultimately replaced the historic 1886 civic chambers at the extant Main Street location. Beyond the broader plan to redevelop the north part of the city’s downtown (then frequently termed South Point Douglas) part of the rationale behind the abandonment of the Broadway city hall site was to allow for the creation of a park devoted to Manitoba’s war efforts and war casualties – a park in which the City Hydro fountain ultimately came to play a starring role.

In April 2019, the Province of Manitoba announced that the fountain would be upgraded as part of a major restoration of Memorial park, to be undertaken as part of Manitoba 150 celebrations.