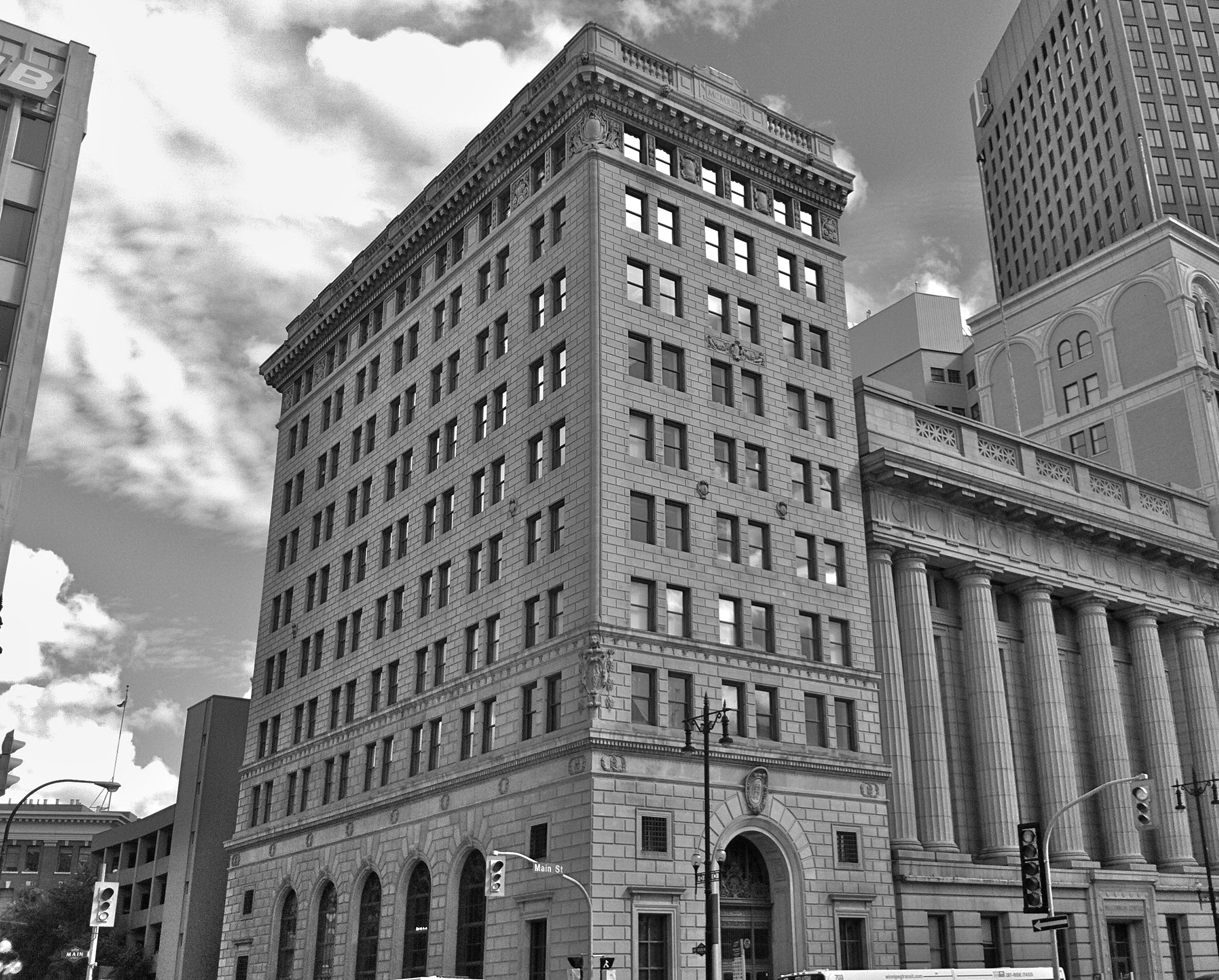 "Designed by Winnipeg architect J. D. Atchison, this building was one of four major banks on “Bankers’ Row” along Main Street. It was the last major office building erected during the city’s early boom period, and served as the Manitoba headquarters of the Bank of Hamilton which merged with the Bank of Commerce in 1923. This plaque is mounted on the northwest corner of the building. Restoration of the building was given a Conservation Award by Heritage Winnipeg and the structure is a municipally designated historic site." ... "

Bankers’ Row was well established on Main Street between Portage and William Avenues when the Bank of Hamilton opened its Winnipeg branch in 1896. The Ontario-based bank, organised in 1872, initially leased space on East Main between Lombard and McDermot avenues. Within two years, however, it had acquired and expanded the Richardson Block (1882) at the south-east corner of Main and McDermot to house its own business and commercial tenants.

Over the next decade, several financial institutions invested in new buildings that transformed Bankers’ Row into a showpiece of Classical Revival and Chicago School architecture. The Bank of Hamilton resisted the trend until the mid-1910s when it found its building had suffered settlement damage. Despite adverse economic conditions due to the First World War, the bank began in 1916 to redevelop its site into a nine-storey office tower.

The plans were drawn by local architect John D. Atchison and two associates, H.C. Ingalls and F.B. Hoffman Jr. Work was completed in 1918 at a cost of $400,000. The general contractor was Hazelton and Walin Ltd., a firm incorporated in Manitoba in 1911 by two Chicago builders, H.T. Hazelton (also spelled Hazleton) and C.S. Walin.

The building had a reinforced concrete foundation (caissons sunk to bedrock), a steel frame protected by concrete, brick and tile exterior walls faced with Tyndall stone, concrete floors, and interior walls and partitions of brick and hollow tile. The two main (west and north) facades expressed elements of the Chicago School of design, notably through their column-like division, modest ornamentation, symmetrical arrangement of multiple windows, and decorative crown.

Atchison (1870-1959) was familiar with the work of Louis Sullivan and other Chicago School architects. He was born in Illinois and had trained and worked in Chicago for several years before opening his Winnipeg office in 1905. Over the next two decades, he planned many local structures, including the North-West Commercial Travellers’ Association, Canada Permanent, Maltese Cross, Great-West Life, Union Trust, Curry, Carlton (Holt Renfrew), and Boyd buildings in the downtown, the Wardlow Apartments in Fort Rouge, and Manitoba School for the Deaf in Tuxedo. Atchison moved to California in c.1923.

His exterior design for the Bank of Hamilton remains intact. Dominating the base of the front (west) elevation is a massive raised entrance arch with an elaborate sculpted keystone. The arch encompasses recessed bronze and glass doors topped by a bronze grille, fanlight and the bank’s coat-of-arms. Each upper floor contains three sets of paired rectangular windows. Smaller openings along the top storey are separated by shields and other reliefs. Above is a cornice with dentils, modillions, delicate mouldings, and gargoyles. The parapet incorporates a balustrade and a pediment inscribed with the building’s date. Belt courses form horizontal divisions above the main/mezzanine, second and eighth floors. Additional accents are provided by a large cartouche at the north-west corner, a festoon between the sixth and seventh floors, wreaths, and shields. The north (McDermot) elevation features five large arched windows that light the banking hall.

Although the building’s interior has been modified over the years, some original finishes are still evident. The entrance hall is lined with grey Botticino marble and a ceiling of antique gold. To the south is a spiral marble staircase with a bronze handrail on turned balusters. As well, there are two passenger elevators set in bronze surrounds. To the east is the banking hall, the walls of which are formed into arches that encompass a mezzanine. The hall has a floor of coloured marble set in geometrical patterns, walls of Botticino marble, and a richly hued, beamed and coffered ceiling with gold leaf. Other features include black Belgian marble countertops, bronze-grilled tellers’ cages, bronze light fixtures, and a wood-panelled manager’s office. A second-floor boardroom has dark oak panelling, beamed ceiling and stone fireplace.

In addition to the Bank of Hamilton, the early occupants of 395 Main included two firms that became long-term tenants. One was the United Grain Growers Ltd. (UGG), formed in 1916 when the Grain Growers’ Grain Co. and Alberta Farmers’ Co-operative Elevator Co. amalgamated. UGG remained on site until 1979. The other was the law firm of Pitblado, Hoskins, Grundy, Bennest and Haig whose successors were at 395 Main until 1969.

The Bank of Hamilton’s tenure, in contrast, was short. The bank had to retrench in a difficult post-1918 economy, then in 1923 it was taken over by the Canadian Bank of Commerce, the Winnipeg operations of which were headquartered in the adjacent building at 389 Main. The Commerce retained operations at both 389 and 395 Main until relocation to Lombard Place at Main and Portage in 1969.

After UGG left the premises, the Hamilton Building joined a growing list of vacant or underused structures in the Exchange District. Public concern about such buildings prompted Winnipeg City Council in 1977-78 to enact conservation measures through the Historical Buildings By- law. The Bank of Hamilton was among the first structures to receive protective designation under the terms of the by-law.

Substantial work was undertaken on the building in 1982 and again in 1999-2000 to restore the banking hall and upgrade operating systems and office accommodations. In both instances, City of Winnipeg staff subsequently occupied the space."