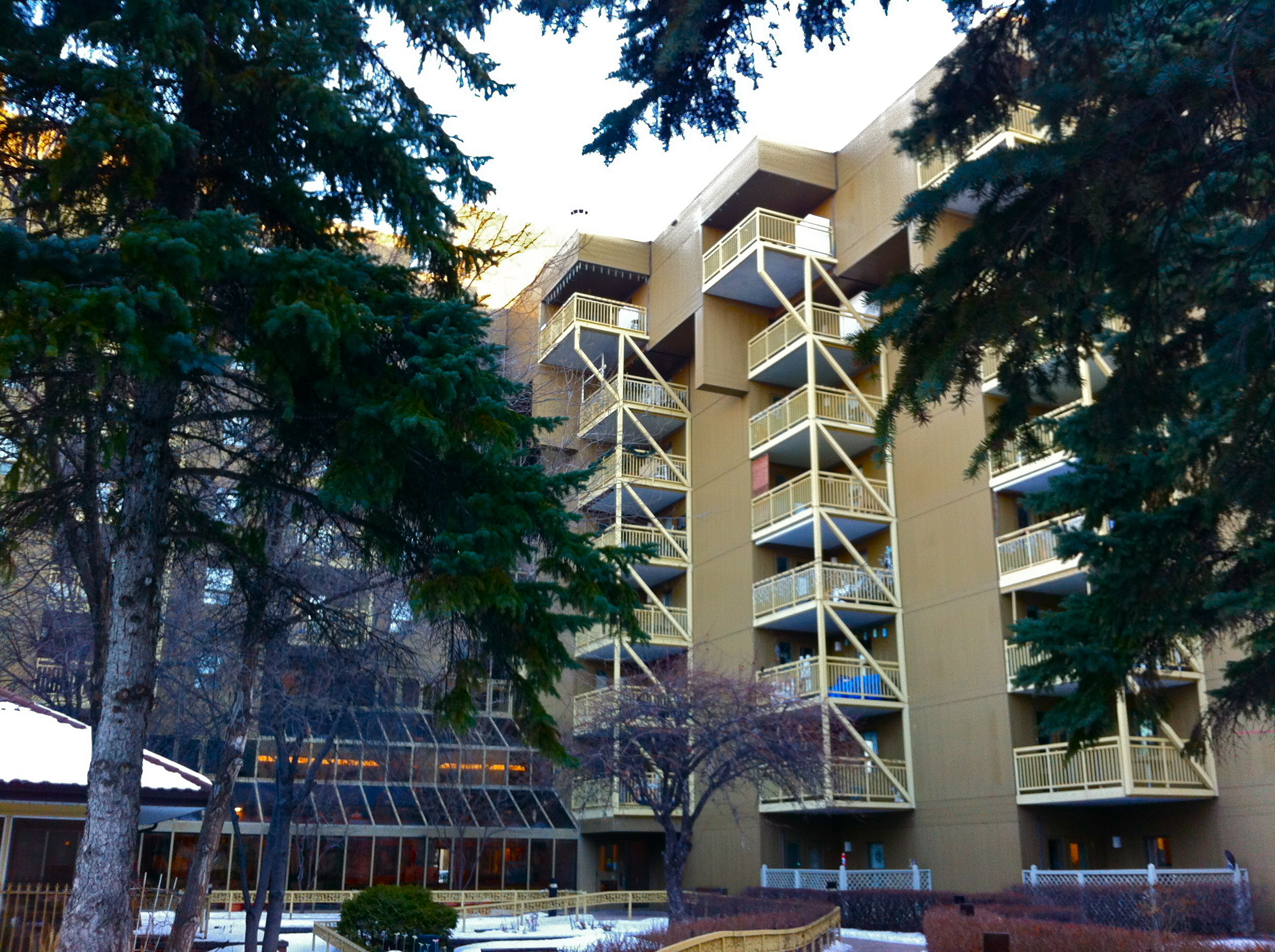 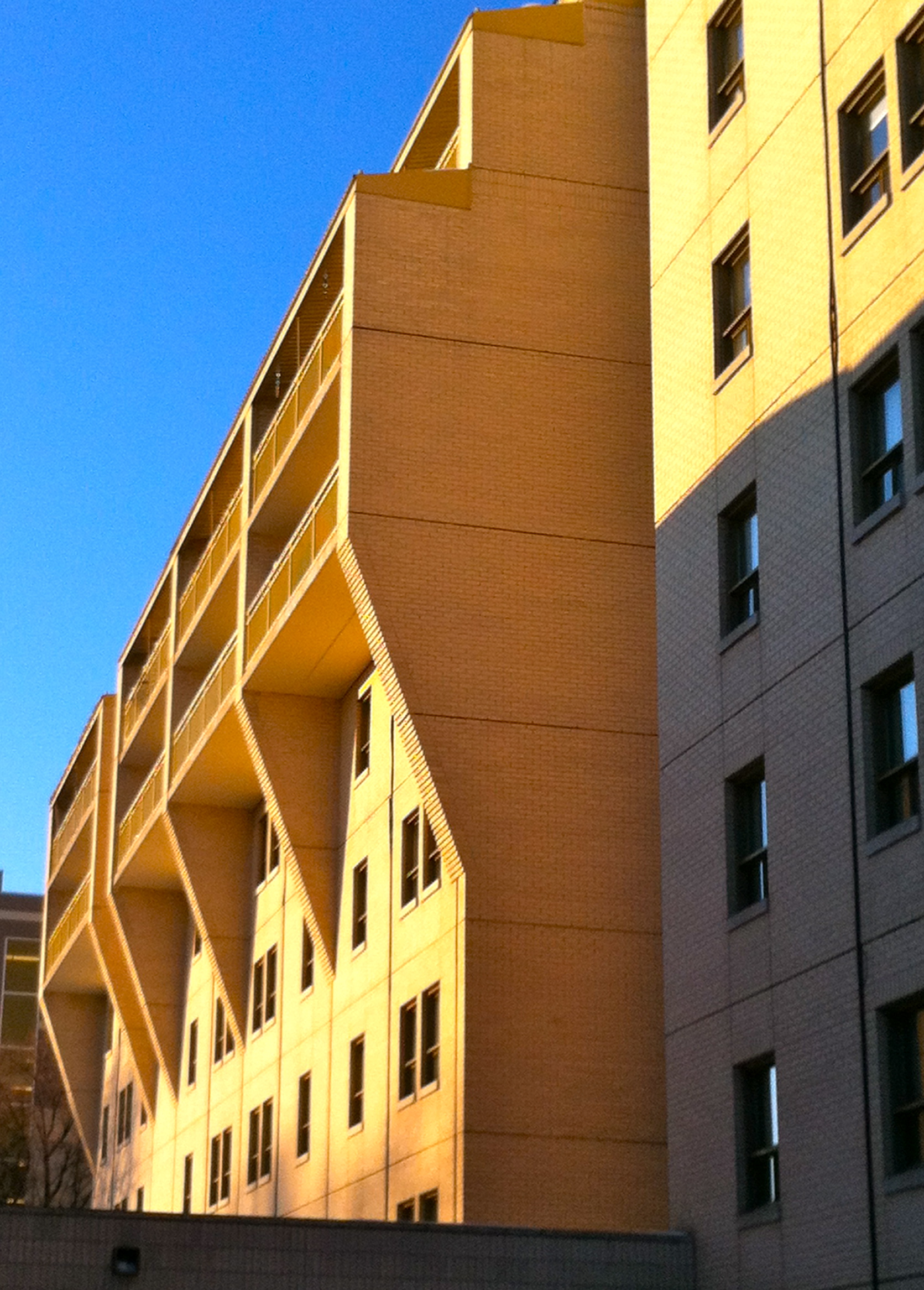 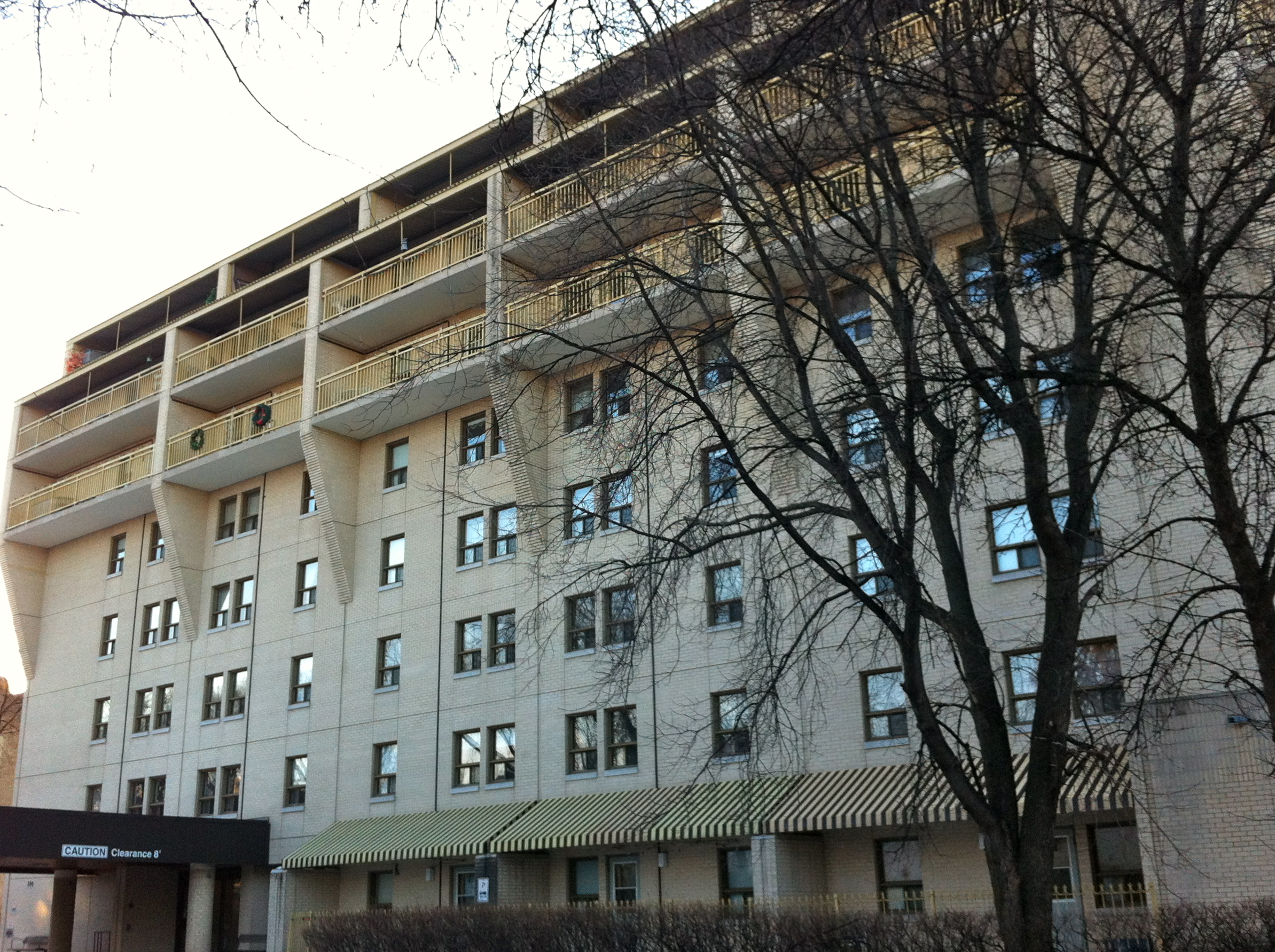 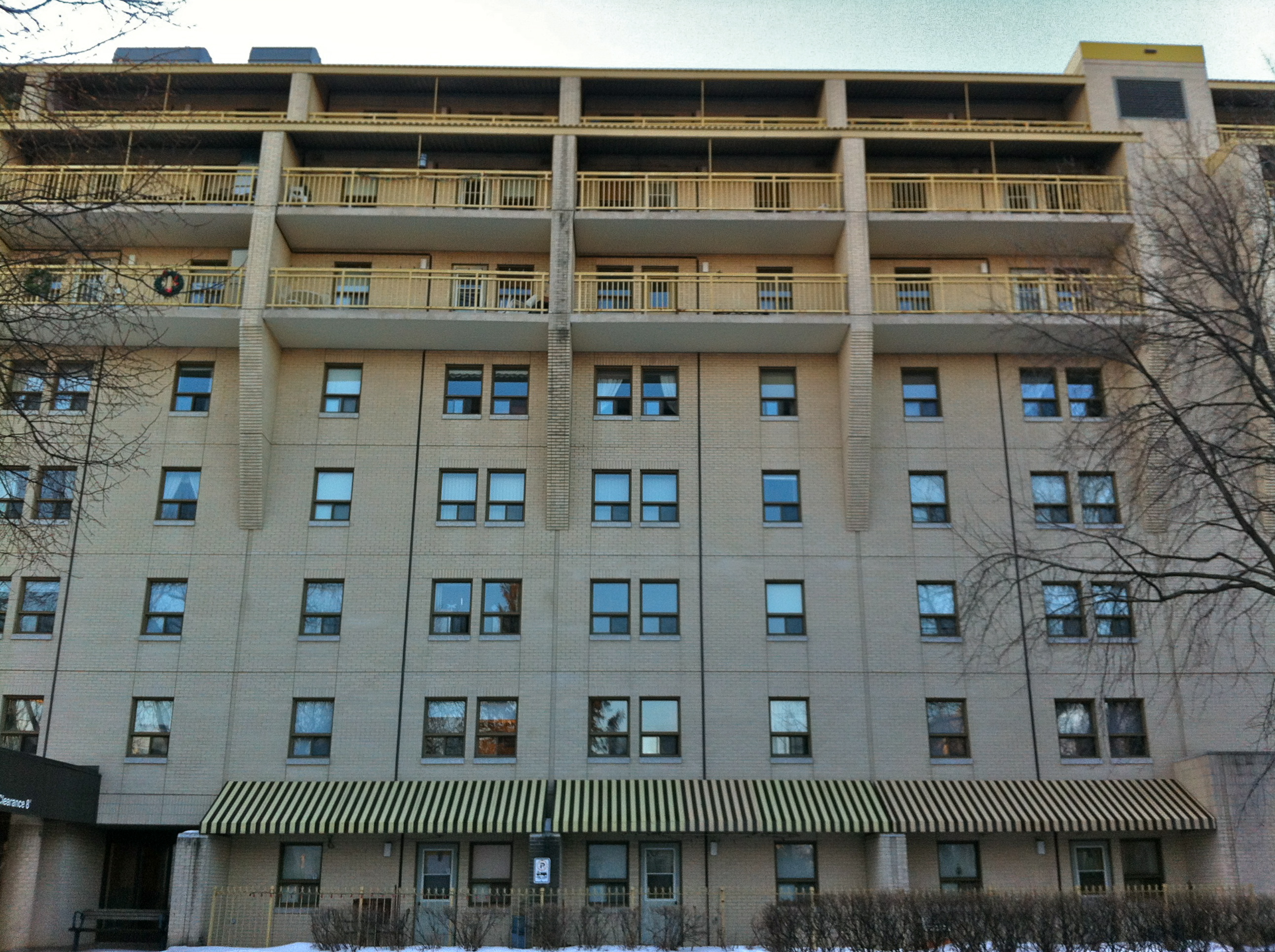 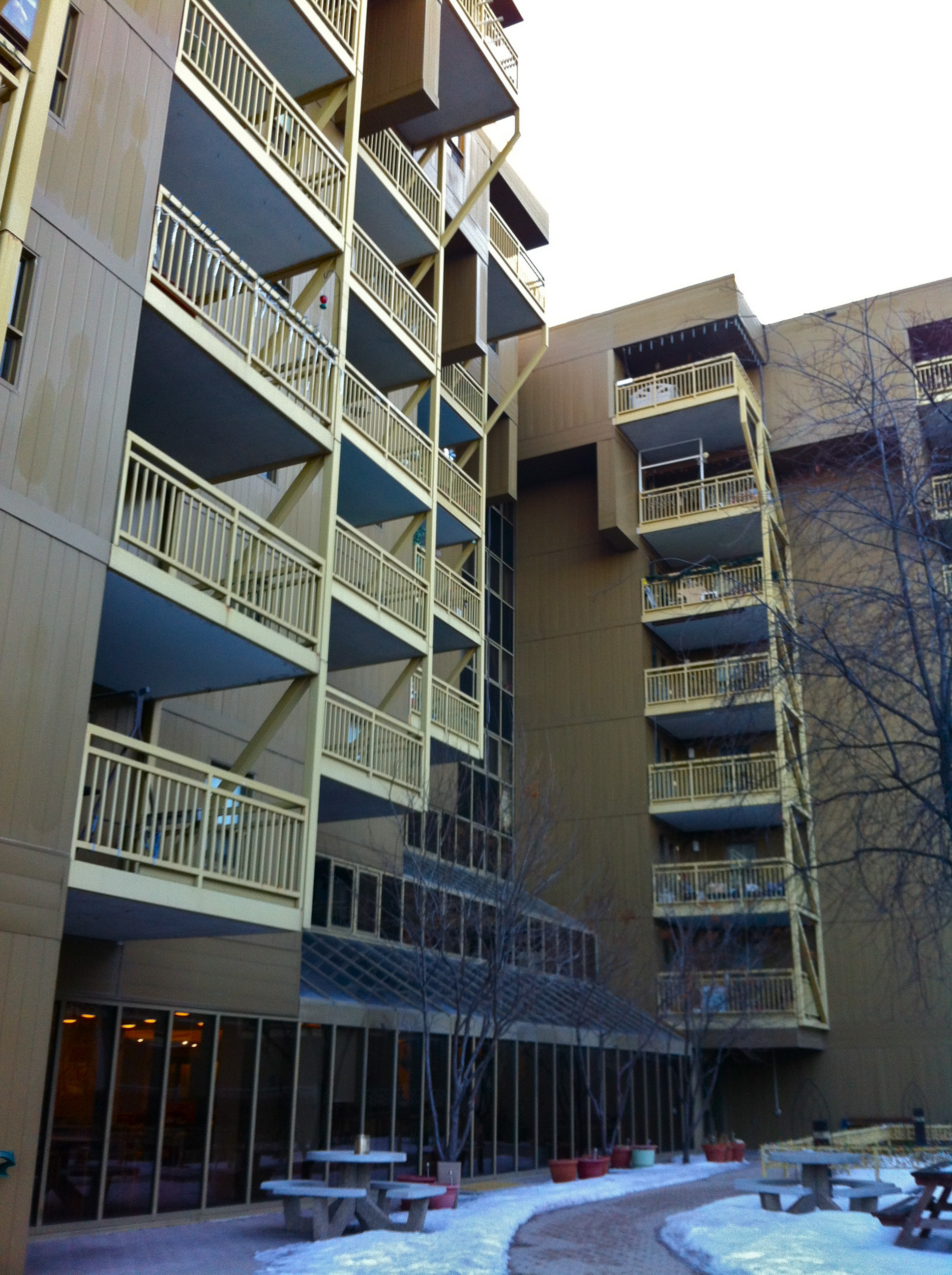 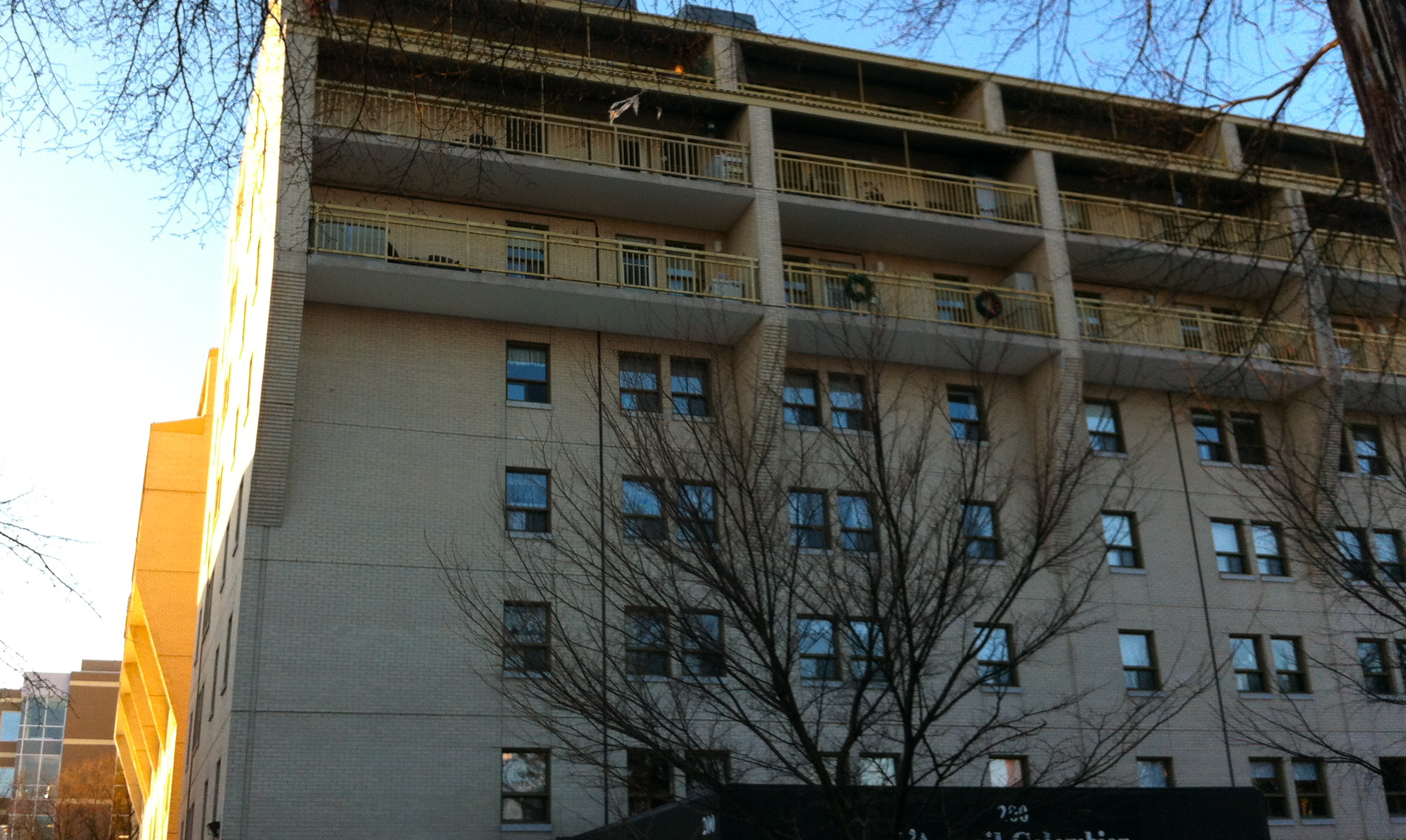 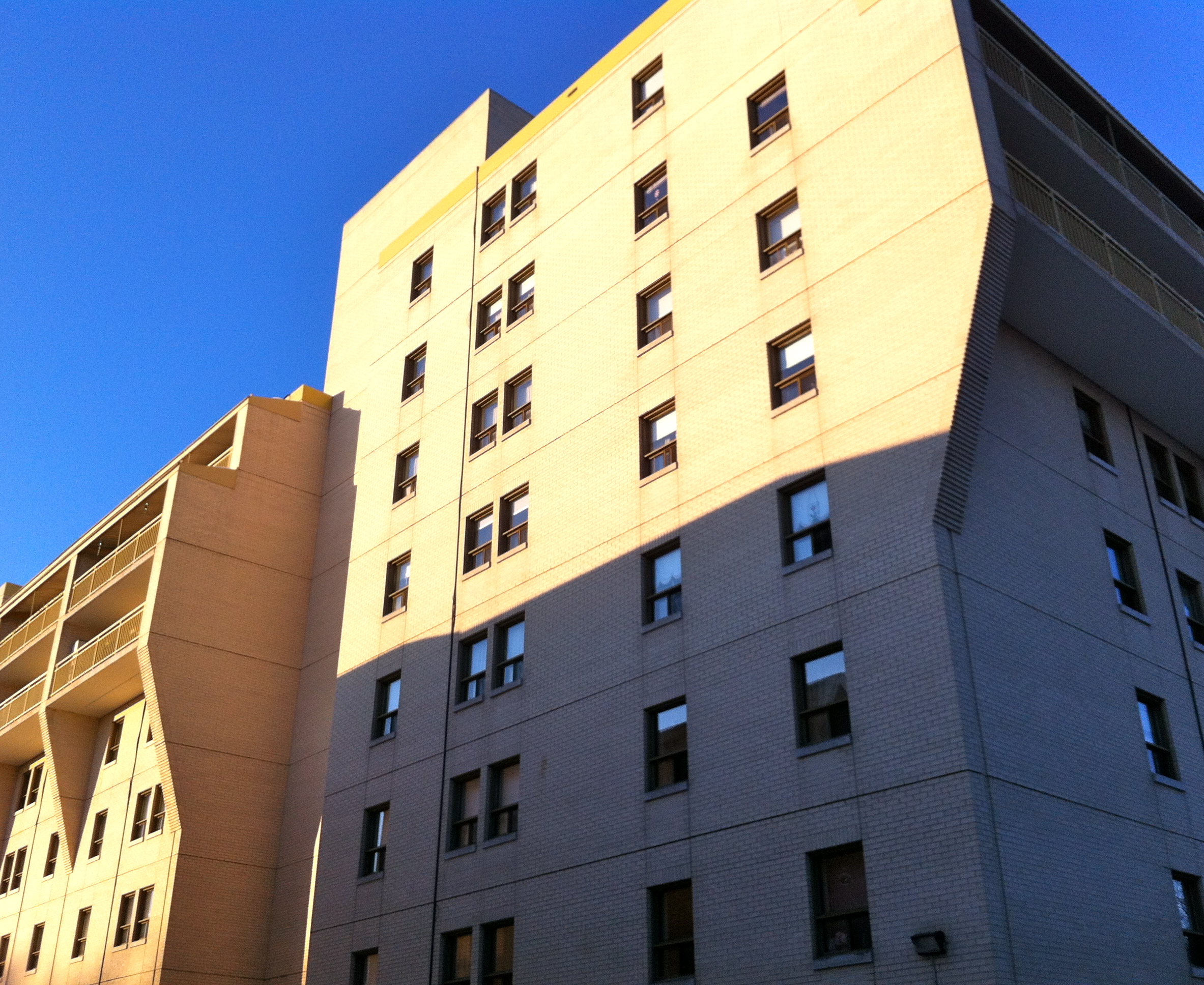 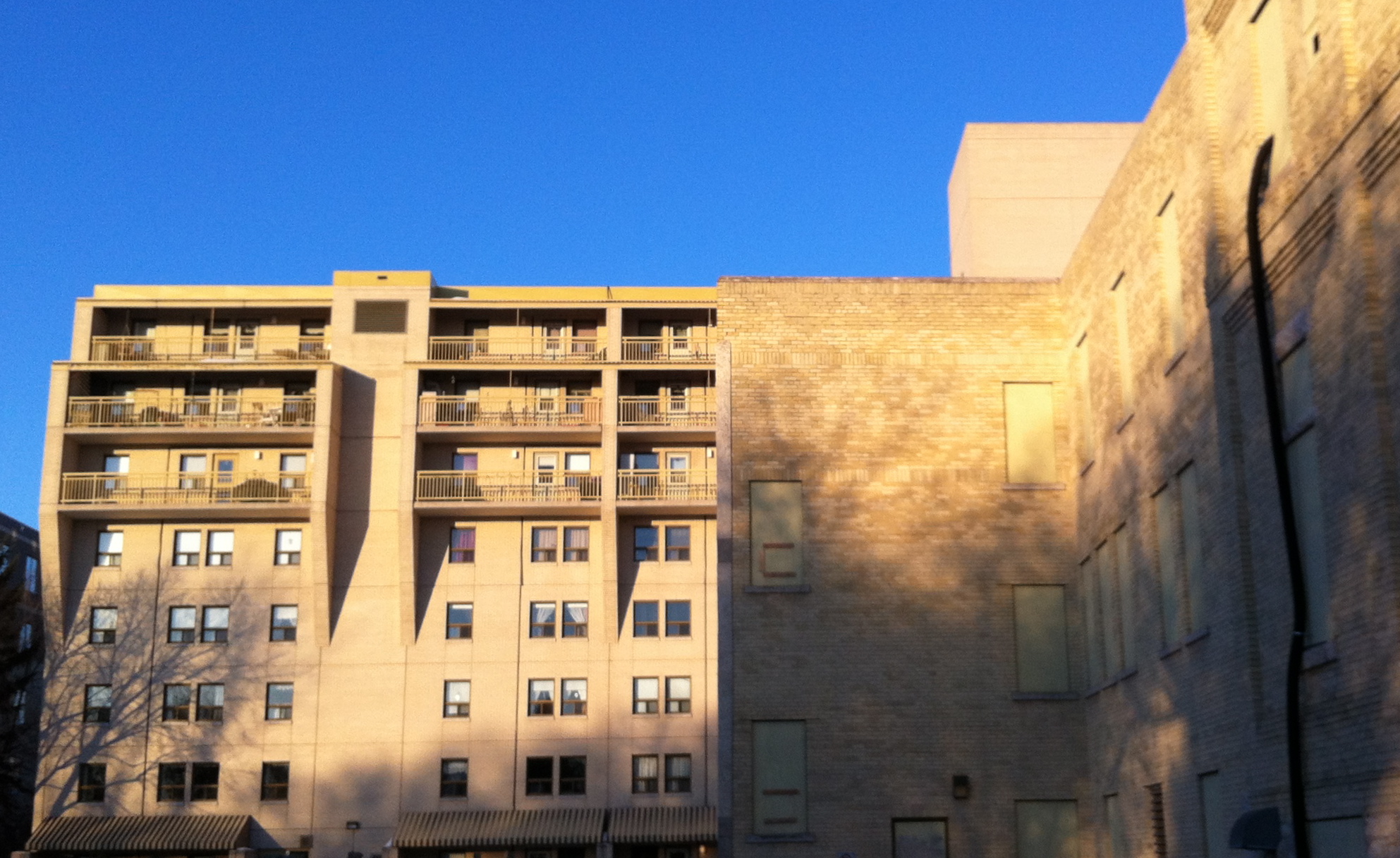 Accueil Colombien is a 147-unit, eight-storey, 12,000-square-metre non-profit senior citizens' residence. L-shaped in plan, Accueil Colombien shelters a courtyard set to the south-west. The building was planned by its architect, Étienne Gaboury, to carefully respond to the prairie sun. Facing this courtyard space, the residence’s exterior walls zigzag, allowing more light into the interior of the structure, while protecting those sitting outside from the wind. For the same reasons, deciduous trees were planted to the south in order to filter the sunshine that hits the glazed public eating and activity areas in summertime, while letting the winter sun shine through. Toward similar ends, the building’s upper storeys and balconies project, shading the lower floors during the hot summer while allowing in the lower winter sun.

On the opposite sides of Acceuil Colombien, the north and east facades, the sixth storey is set forward while the seventh and eighth step back in order to more sensitively relate to a context of shorter historical structures. In both respects the unusual top-heavy silhouette recalls such notable foreign modern architectural examples as Milan’s Torre Velasca and the residential work of Ralph Erskine at the Byker Wall development at Newcastle upon Tyne, which similarly features a preponderance of balconies. The cost to build the Accueil Colombien building was originally estimated to be $6 million, financed by the Knights of Columbus, Manitoba Housing and Renewal Corporation and with a mortgage guarantee from Canada Mortgage and Housing Corporation.

To the east, attached to Accueil Colombien, is a former Oblate order convent (210 rue Masson), later an Oblate order school. The cladding of the residence echoes that of the historic Oblate building – another contextual gesture. At the time of the construction of Acceuil Colombien, it was intended that this space be rechristened as “Residence Langevin,” a development which would be rented to such organisations as marriage counsellors, senior citizens' associations, day-care centres, with the upper storey to become a residence for those with mental handicaps. The developers of the Acceuil hoped that the activities in Residence Langevin would draw seniors from the apartment building into contact with the younger generations, sparing them from the social ghettoisation and generational isolation sometimes found in seniors’ residences. The former Oblate building features wood panelling, a fireplace on the ground floor, and a historic wooden stairway. Its architect was Henry Sandham Griffith and it was built by Joseph Azarier Senecal. At present it remains unoccupied.