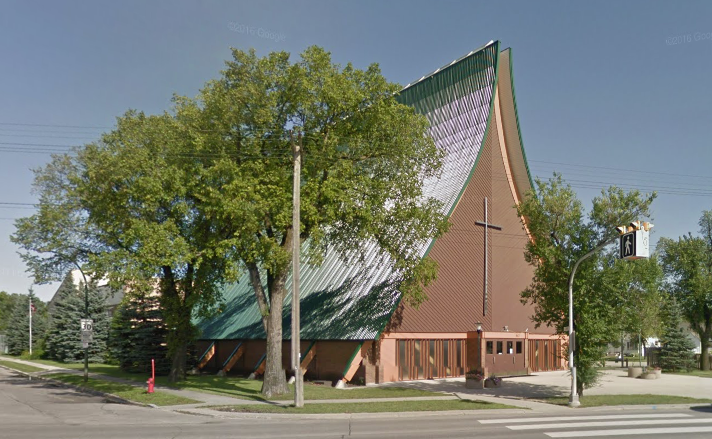 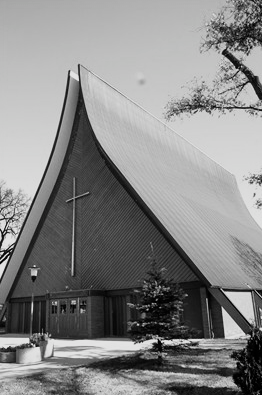 As encountered from St. Mary’s Road, the first impression of Christ the King Church is dominated by a sense of sweeping uplift. This aspect, appropriate for a church, is conveyed in large part though the massive and curving surface of the building’s A-frame style roofline and underlined by the diagonal wood treatment of the front facade. This inverted-V shape reaches 68 feet above street-level and was the highest building in the city of St. Vital at the time.

The church opened in November of 1965, when the the first Mass was celebrated and was blessed by the archbishop of St. Boniface. Also present at the opening was Manitoba Premier Duff Roblin, St. Vital mayor Harry Collins and other civic and religious officials. The building’s design and styling correspond to certain trends in the field during this period, with modern architecture used expressively as a form of communication as well as for practical purposes. Such an approach was particularly common to churches commissioned by the Roman Catholic church in the years following the Second Vatican Council (also known as Vatican II) in January of 1959, an event that involved a reconsideration and revision of church practices. Similar expressive forms are found within the church, which has a seating capacity of 600. Notable design elements on the building’s interior include: the diagonal wood treatment of the east and west ends of the nave; the combination of thick glue-lam wood beams with a tongue-and-groove wood ceiling; slender windows inset into the brick walls below the wood beams; decorative wood screening; and hanging pendant lights.

Christ the King parish commenced as mission of Holy Cross parish in 1955. It was in this year that the City of St. Vital offered the Archbishop of St. Boniface land at the intersection of St. Mary’s Road and Lennox Avenue, where there stood an abandoned building. At this time this structure was renovated, and used by the church as a chapel and a school. In 1958 a new chapel with a school and auditorium was built on the St. Mary’s Road property (the present