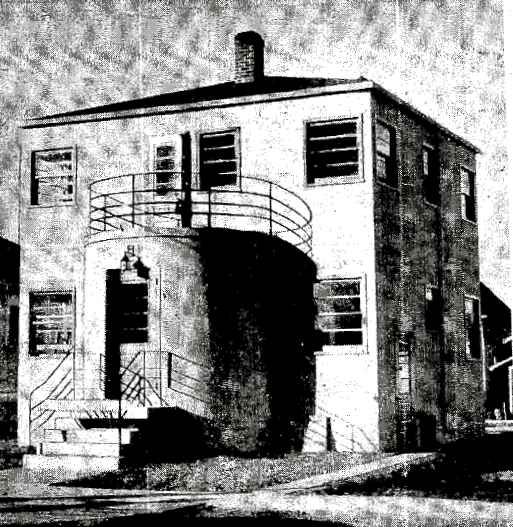 804 Ashburn Street was built as the 1937 Winnipeg Demonstration House. Described as “ultra-modern” and “ultra-modernisic” the model residence was opened for inspection 26 October 1937. It opened to the public on the first of November of that year, closing on 4 December. The house, completed at a cost of $3,415, features Art Moderne streamlined forms, a semicircular entry porch and upper level balcony (termed a “sun deck” in advertisements). Period articles discussed the homes’ “simplicity of line” and “external beauty.”

Built during the Depression, the home served as an aspirational vehicle to those desiring better future living conditions, touted as “a demonstration of the possibility of building attractive homes, equipped with all the conveniences of this modern ages.” 804 Ashburn Street’s kitchens were reported to have been designed by “experts to save steps for the house-wife,” and such details as built-in cupboards and an ironing table. Tickets to see the home were made available through Winnipeg City Hall, Winnipeg Hydro and the T. Eaton Company, all three being major sponsors of the display.

Among the aspects of the home that drew praise at the time were corner windows providing “the maximum amount of light and ventilation” and allowing for the freer use of interior space, as well as a basement playroom. The construction of the demonstration house was led by the City of Winnipeg, with Henry Borger & Son the General Contractors. S. Geenspan provided glazing and doors; plastering was done by L. Mattson; Cowin & Company Limited installed the foundations; Green’s Wrought Iron Works provided iron details; Atlas Flooring Surfaces laid the floors; and special “Wood Wool” wall insulation was installed by Thorkelsson Limited.

A special emphasis was placed on the importance of modern kitchen electronics, provided by sponsors City Hydro and the furnishing by T. Eaton Company.Tours of the home were led by guides under the supervision of Chief Winnipeg Building Inspector James Smith. R. A. Sara, Chairman of the Winnipeg Special Committee on Housing Conditions also played a role in the project’s development. Near the end of its time as a display home, the residence was sold via the City Clerk’s Office. The possibility of the house’s reproduction was advertised and made available through the City of Winnipeg Housing Company Limited at a cost of $3,000.