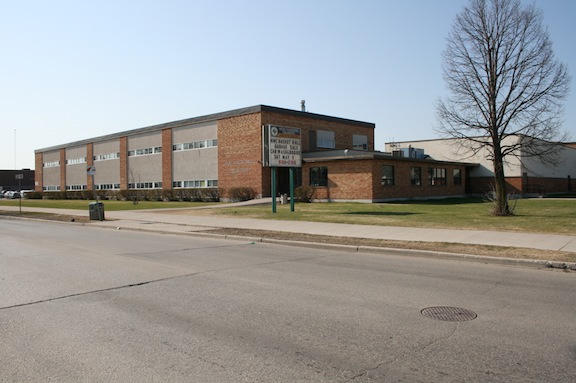 Known as 'Miles Mac', this high school was formed by two schools joined together, yet manages to appear as a single entity. Melrose Junior High, just down the street, was joined to Miles Mac in 1969.

The original high school opened in 1951 and demand for space grew rapidly until Melrose Junior High opened in 1954 on the same block. It is possible that there was a plan to join the two schools from the start, but before then, an addition was made to Miles Mac in 1960 that included a library, classrooms, a multipurpose room, labs and administration space. The addition was called the south wing, and formed a U shape. Both schools were designed by the same architects and employed similar materials.

The earliest portion can be seen on the west elevation to the street as a single-storey structure, now in grey stucco, with a two-storey wing perpendicular on the north side in brick veneer and large amounts of glass block (now filled).

Linking with Melrose nearly doubled the complex and added a new theatre and library as well as the Melrose space. The yard is borders the local YM-YWCA.