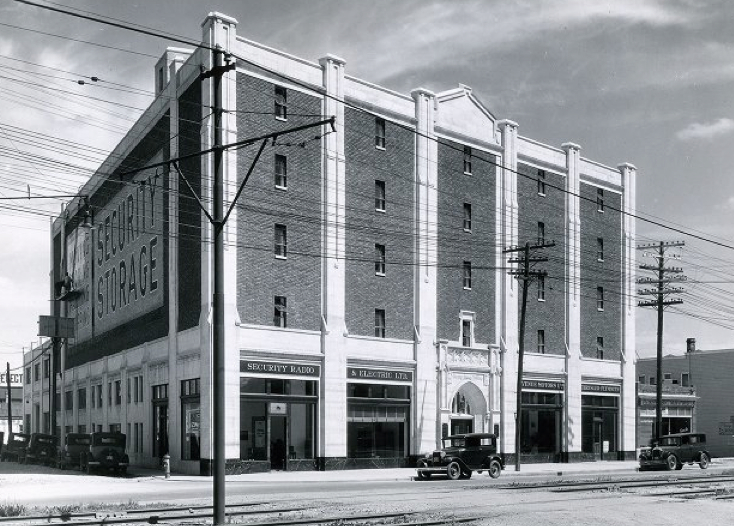 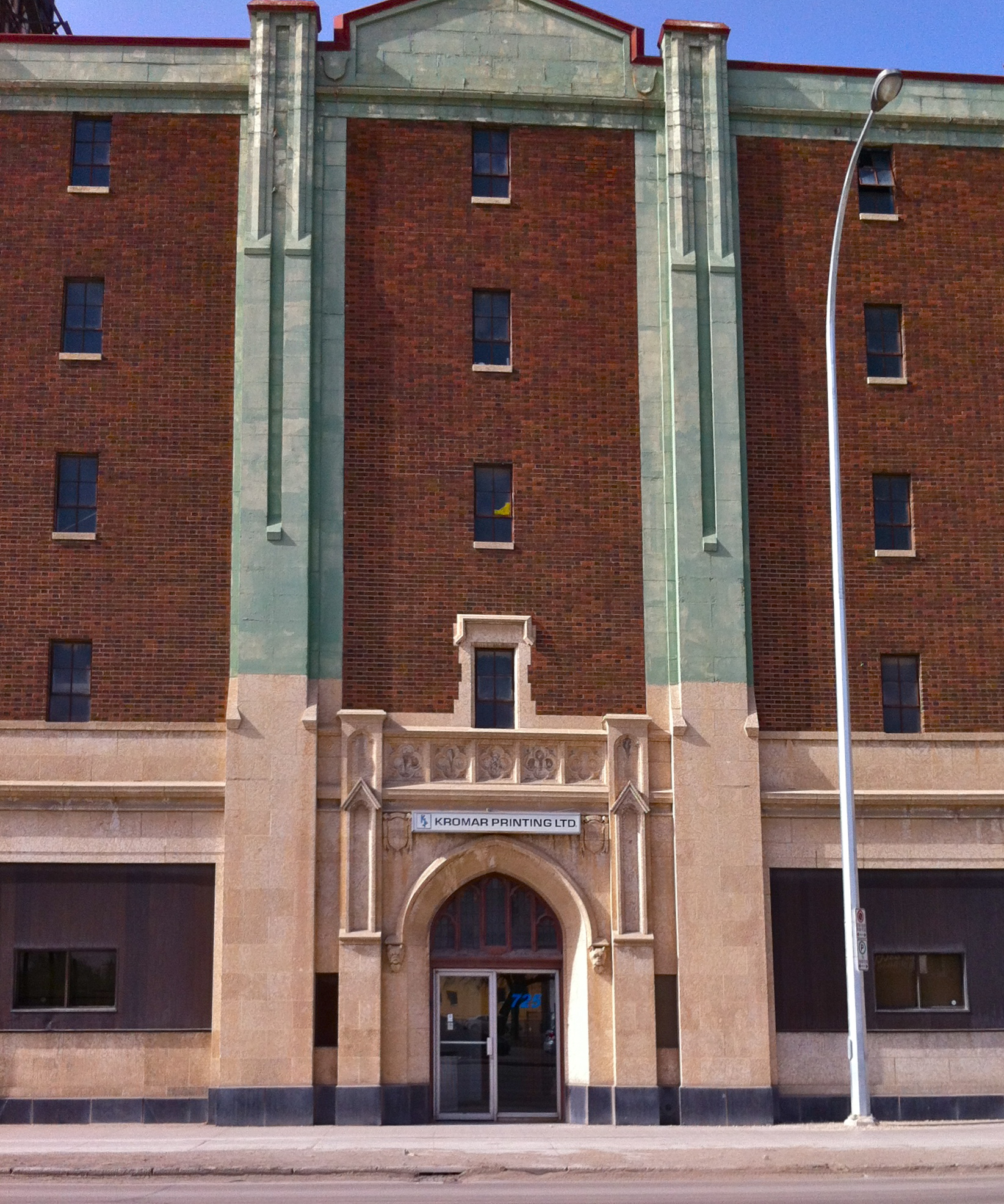 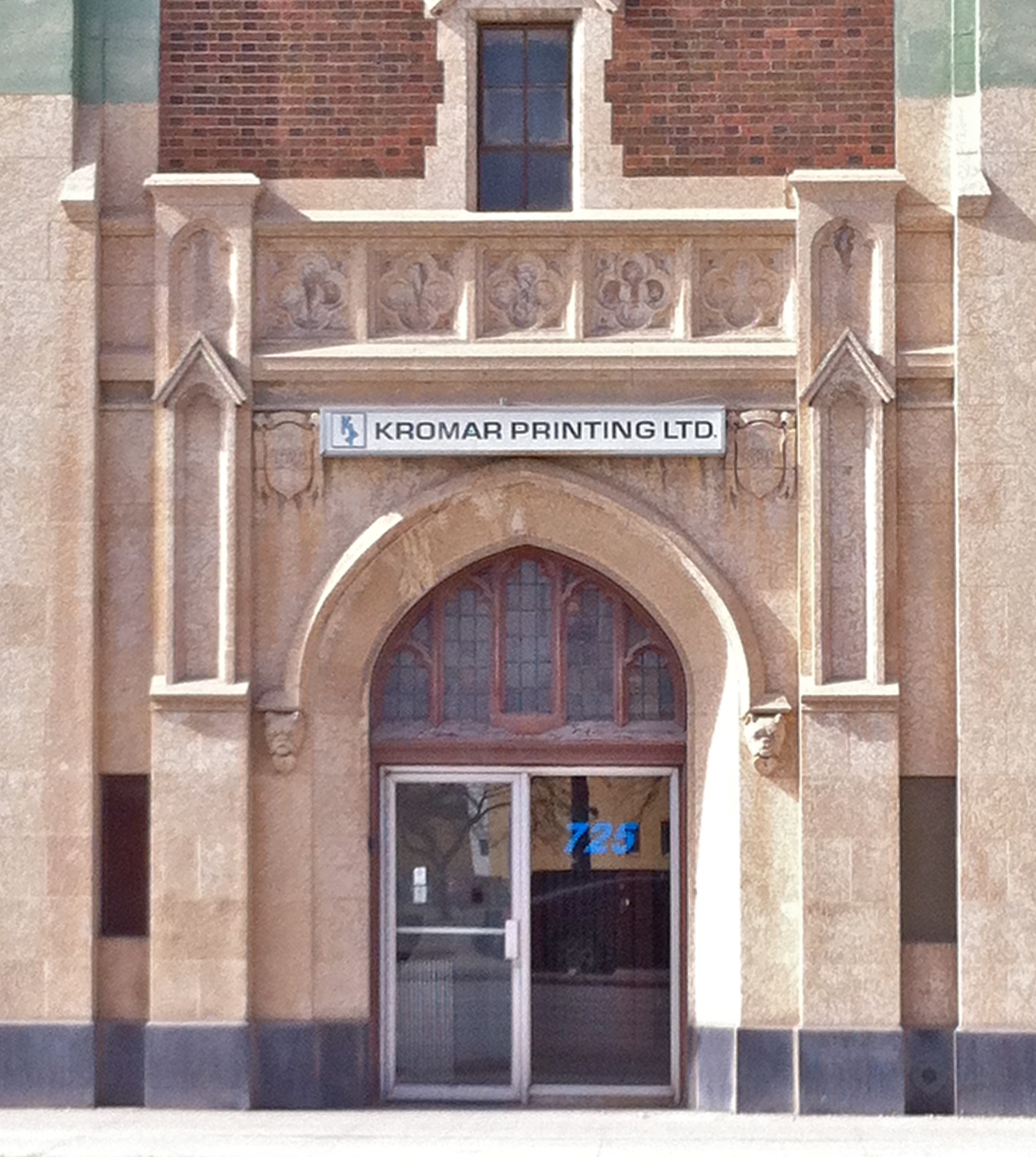 725 Portage Avenue, built as the Security Storage Building (and now known as the Kromar Printing Building) is an imposing presence located just west of Winnipeg’s downtown. The building’s south façade – its main, Portage Avenue, elevation – is defined by six soaring Tyndall limestone neo-Gothic style piers rising five storeys. At centre the neo-Gothic theme continues with the elaborately decorated doorway-surround. This area features such embellishments as padlock-toting bulldog gargoyles which buttress a pointed arch. Above this stand a row of five carved stone quatrafoils. The exterior is otherwise clad in Twin City brick of buff, green and brown shades. The general impression created is of strength and impressiveness, imparting a sense that goods stored at this site would be secure.

Above-ground the 800,000 square foot structure was built to house two distinct sections: a main area for storage and office purposes (as well as space for two stores along Portage Avenue) and a rear section for garage services and packing rooms. The main floor was designed with a full height of 16 feet to allow for a mezzanine set above over the shipping section. Overtop, the second floor contained private storage: compartments of fireproof construction protected by heavy, pad-locked steel doors. Originally the floors above this stood empty, ready to be put into storage use. The structure’s interior walls were constructed of brick and tile, with the walls of the storage section clad in gypsum-tile. The rear, garage or shipping area was initially only two storeys tall, though it was built to accommodate further construction above. This addition, three storeys – matching the full height of the rest of the building – was ultimately built in 1940, with J.N. Semmens again serving as architect. This addition increased the structure’s square footage by nearly 25%.

To inform the design of this building, period press accounts recount that “a great many of the storage plants throughout the United States and Canada were visited by members of the company and their architect, Col. J. N. Semmens‎,” influencing the final design. As the structure was to serve specialized storage needs, 725 Portage Avenue was constructed with the intention of meeting “all the requirements of the insurance companies and the fire underwriters reinforced-concrete construction throughout” the latter put together using a flat slab system of construction. The basement, unsuitable for storage, holds a post and beam foundation and otherwise initially held only mechanical services “such as the heating plant, air compressors and pumps.”

725 Portage Avenue was built by the J. L. Quay Construction Co., who won this contract on 11 March 1929. Led by construction supervisor F. Hooper, the building’s assembly was fast, completed by late July of the same year.

The Security Storage and Warehouse Company was owned by American-born entrepreneur Irving M. Winslow, who established the firm in 1909. The company’s earlier storage facilities include 583 Ellice Avenue (as of 1910), at 83 Kate Street, and at McGee Street and Sargent Avenue (as of 1914). Kromar Printing has operated at this address since 1975, not long after the Security Storage and Warehouse Company ceased operations.