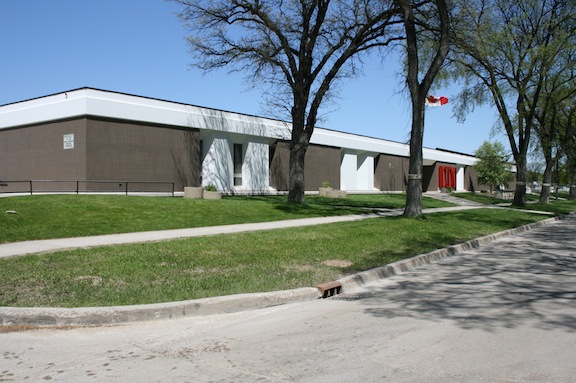 The construction of this school marked the end of a six-year moratorium in new elementary school construction within the old Winnipeg #1 School Division. It is the third Lord Roberts School on this site. The first school was built in 1910 and the second opened in 1920 on the same lot, behind the larger first school. Both of the older schools were demolished in 1970, a few months after this school was opened.

The new school was built all at once so the design is intact and uncompromised, with the exception of some small details. Construction of the school, which was planned to hold 970 students, cost $1.3 million. The one-storey structure is a medium-size school, not-quite-square on its site and built around a small internal courtyard. Although its front entrance faces south, the school is fully finished on all four sides. The wall space alternates between a dark brown face with brilliant white twinned window bays where the floor-to-ceiling opening is set far in behind an angled concrete casement. This sets up fascinating geometric shadows in the sunshine. Even at night, the walls create a lively interplay of light and dark; the front entrance is differentiated with a splash of bright red decoration that is picked up by the nearby Canadian flag. The new Lord Roberts School has 22 classrooms, a fully usable basement, a large multi-purpose room, two big gyms, a library and three open-air classrooms. It was one of the earliest Winnipeg schools to be designed to accommodate students with disabilities. It is a true community school in its services and outreach to its constituents