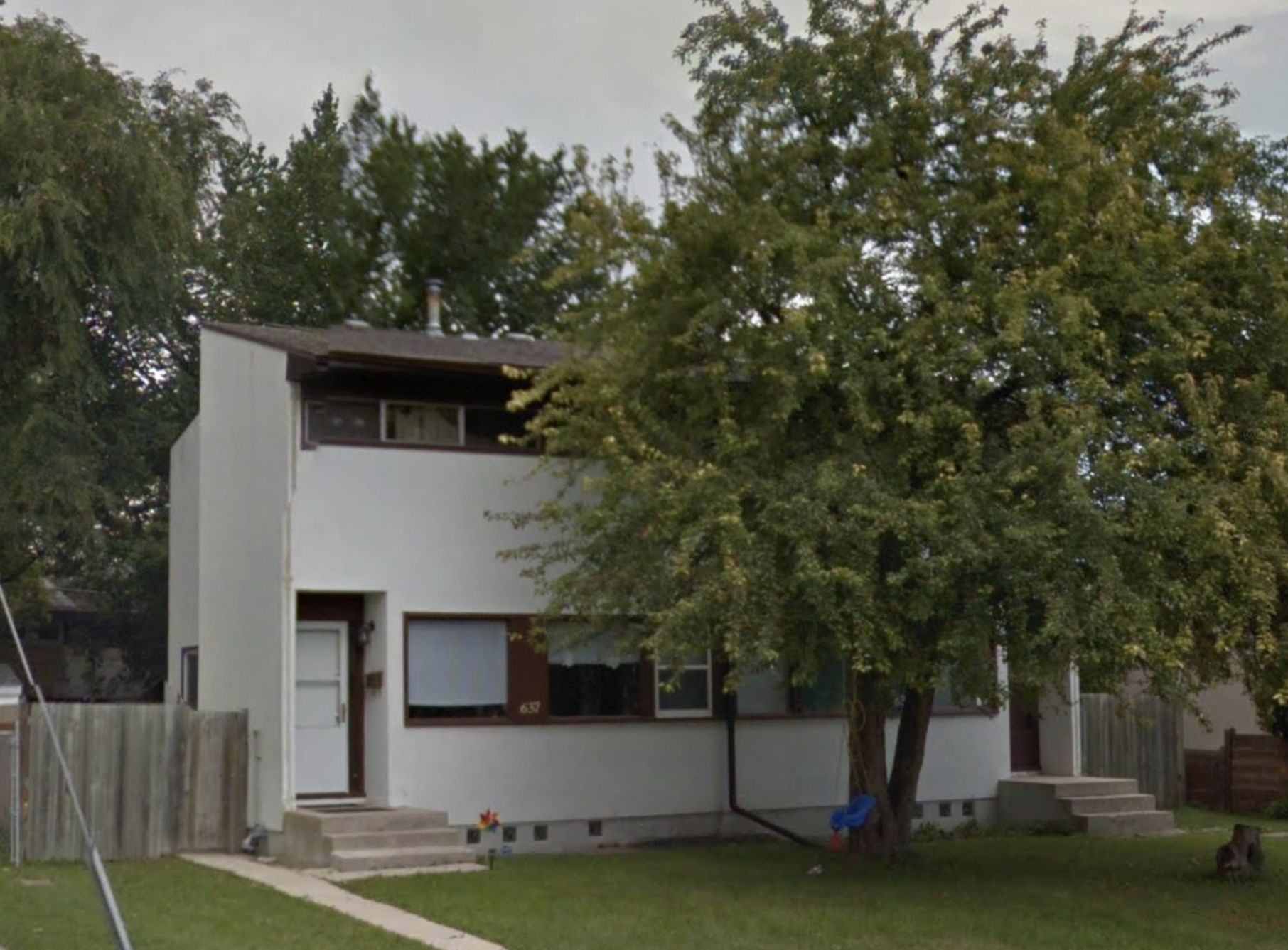 The Berkshire Park neighbourhood is a unique Winnipeg case: an entire suburb designed by a single architect and built by the same firm. The area was developed by Haag Homes Limited from 1963-67. Haag had an extensive background with construction in the city’s south end, having built, among other developments, at least 200 homes in the Riverview neighbourhood. For Berkshire Park the company made a bold move hiring noted Manitoba architect Étienne Gaboury to plan every home in a district spanning six streets.

Period advertisements for the neighbourhood prominently touted Gaboury’s name. This effort makes clear that a certain cachet was attached to his involvement, the developer clearly hoping to profit from the architect’s notoriety. These ads promoted the area’s homes’ spacious bedrooms, large kitchens, Walter Wray windows and oak parquet flooring. Town homes in the area initially were sold for $12,350. The community’s original display home was located at 15 Berkshire Bay.

The advertising of Gaboury’s name indicates that the architect had a level of fame, at least locally, enough to warrant the promotion of his name as a key attribute in marketing a residential development. This was, in fact, the only circumstance of such advertising in Winnipeg during this period – and possibly one of the only instances of such an approach in the country. The linking of Haag and Gaboury in this way was undoubtedly spurred by the fact that both were key figures in the construction industry in the south-east section of the city over the prior decade.

Berkshire Park was developed in what was then the City of St. Boniface; the City of Winnipeg’s 1973 District Plan for St. Boniface lists the neighbourhood within the Windsor Park Local Planning Area, forming its northern-most section. The development was part of a large population boom in St. Boniface during the post-war era. Population of the municipality increased from 26,342 to 37,600 between 1951-1960, reaching 43,214 by 1966 and 45,370 by 1969. This growth rate significantly exceeded that of Metropolitan Winnipeg as a whole.

A 1958 graduate of the University of Manitoba’s School of Architecture, Gaboury conducted post-graduate training at the École des Beaux-Arts in Paris, during which he was affected by experiencing the work of the famed early modernist Swiss-French architect Le Corbusier. Given this, it’s not surprising that Berkshire Park bears a resemblance to Le Corbusier’s renowned 1920s neighbourhood design at Quartier Modernes Fruges, in Pessac, France.

As at Pessac, at Berkshire Park different building plans alternate throughout the neighbourhood, creating a sense of both coherence and variety. While at Pessac one finds a mix of detached, semi-detached and row houses and three-story apartments, at Berkshire Park all the homes are duplexes, each with its own gardens – a fusion of privateness and sociability. In both cases, time has brought personalisation to a once standardised plan, with a variety of colours of paint replacing the original white. If in the modern era architects and critics have at times regretted the demise of the architectural harmony, here – spurred by circumstance and economics – Gaboury brings back such balance while accommodating a contrasting desire for variation and individuality.

Gaboury spent much of his career building in nearby neighbourhoods. His office was located in St. Boniface for many years. In a number of his most celebrated works the architect selected stone and wood as his materials, as at St. Boniface Police Station, County Court and Health Unit and Église Précieux-Sang. At Berkshire Park, however, he employed largely stucco; a dominant material in Canadian suburban construction. As he did in his other stucco projects, at Berkshire Park Gaboury made the material his own through the employment of a sculptural treatment of form. This approach is manifested in the use of large areas of stucco left deliberately unadorned, the use of overhangs and fin-walls, inset doors and windows, exaggerated pitched rooflines, unique window shapes and the use of decorative siding. Through some of these techniques Gaboury engaged with the prairie light, a subject that formed a continued motif throughout his career. Beyond Le Corbusier some of these gestures – in particular the use of expanses of white – recall the work of Finnish architect Alvar Aalto.

This home follows the most common scheme used in the Berkshire Park area by Gaboury: a duplex form topped by a gable roof (which is here staggered at the ends), the projecting second storey surmounted by an overhanging deep eave and bearing slender horizontal windows and accent materials. These last forms are arrayed in an arrangement analogous to the ribbon windows found in earlier notable modernist homes. Large areas of sparsely embellished stucco are left, a simplicity that also speaks to the architect’s modernist inclinations. Here the duplex is one of a limited number of designs that are alternated throughout the neighbourhood to provide aesthetic variety. In this case the entrances of the duplex are sunken into the building, positioned at the edge of the front facade, with larger windows at centre. Similar homes in the area can be found at the adjacent 637 Elizabeth Road, 619 & 621, and 661 & 663 Elizabeth Road, 195 & 197 and 183 & 185 Berkshire Bay.

The general arrangement of the duplex, with its projecting eave and upper floor, shades the lower section of the building from the high summer sun while letting in light and heat in the winter. This gesture results from Gaboury’s mindfulness of regional climate. As he stated in his 1980 essay “Toward A Prairie Architecture,” the architect believed that “Over and above our ingenuity in technically overcoming regional climatic conditions, regionalism of design and style should be expressed in architecture. We may become extremely clever in artificially controlling heat, cold, humidity, the wind, the rain - in simulating in our prairie buildings the fairness of Florida - but even in so doing, we will not obliterate regionalism... If the exposure to natural forces must be overcome by indirect means, the effort of doing so will in some indirect way acknowledge regionalism. How many wonderful opportunities have been lost to directly express in architectural forms the forces of nature on our buildings? Why not let them be a source of inspiration?” He continues: “The very necessity for controlling our thermal environment demonstrates that universality in architecture is a fiction.”