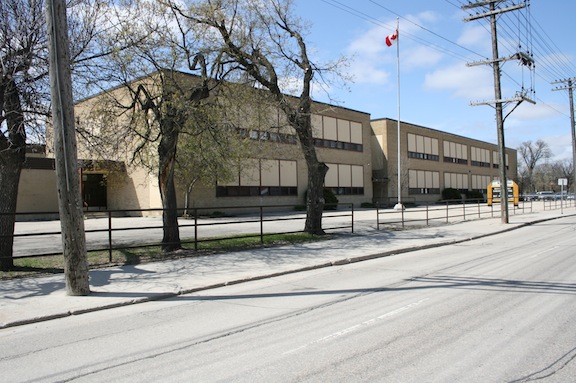 Marion School was designed by local architectural firm Smith Munn Carter Katelnikoff and constructed in 1950. The school was named after long-time Trustee and Chairman Joseph Alderic Marion. The 17-room school was built at a cost of $200,000 and was officially opened on Saturday, January 6, 1951. Both the Minister of Education, Honourable W. C. Miller, and then-Mayor, George C MacLean, attended.

The two-storey light brick structure was designed with a double loaded corridor of classrooms on either side. The many windows reflect a rhythmical layout, but each window has been substantially filled in, with only the lower portion retained. Despite this, the original look and intention of design endures.

The school was originally built as a public girls’ school and for some time, operated as a branch of St Joseph’s Academy, under the Sisters of the Holy Names of Jesus and Mary. In 1953-1954, an eight-classroom expansion was completed, and in 1963, a gym was added to the south end of the building.