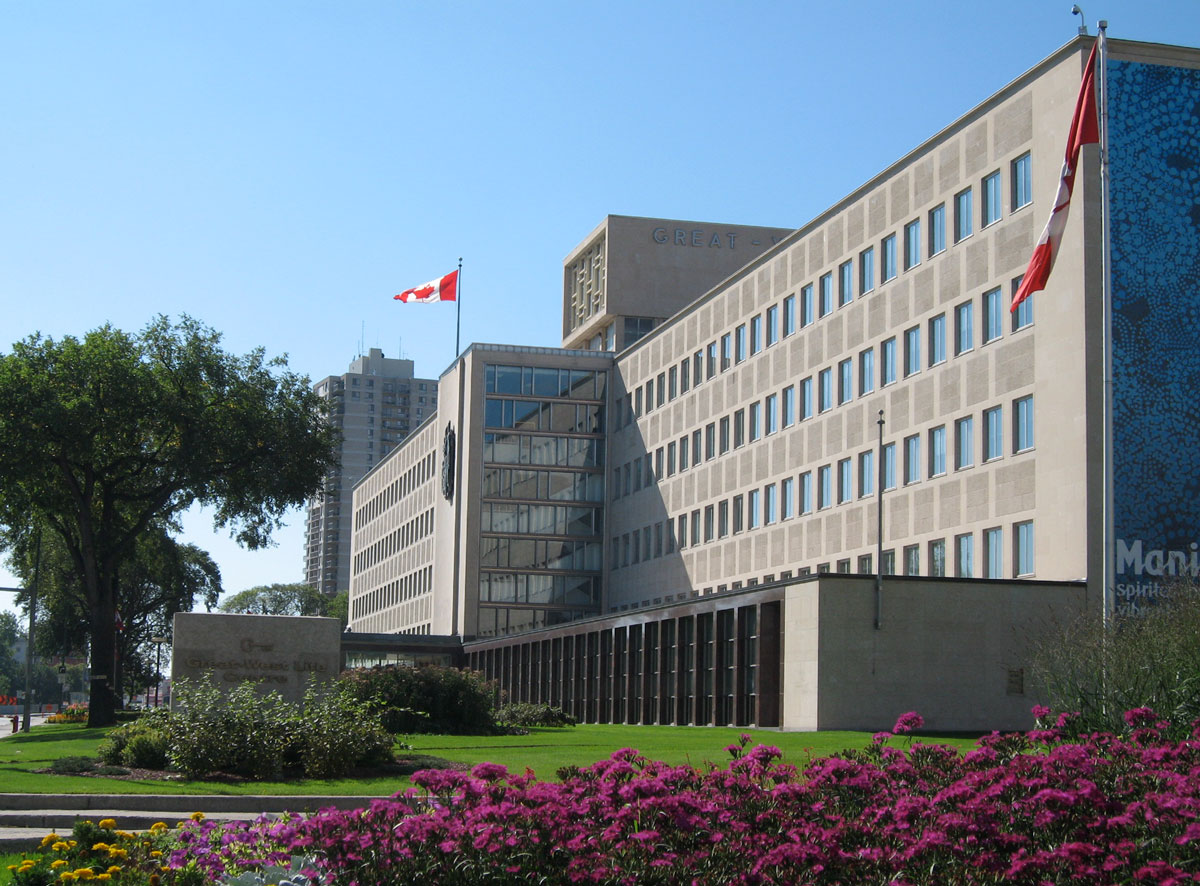 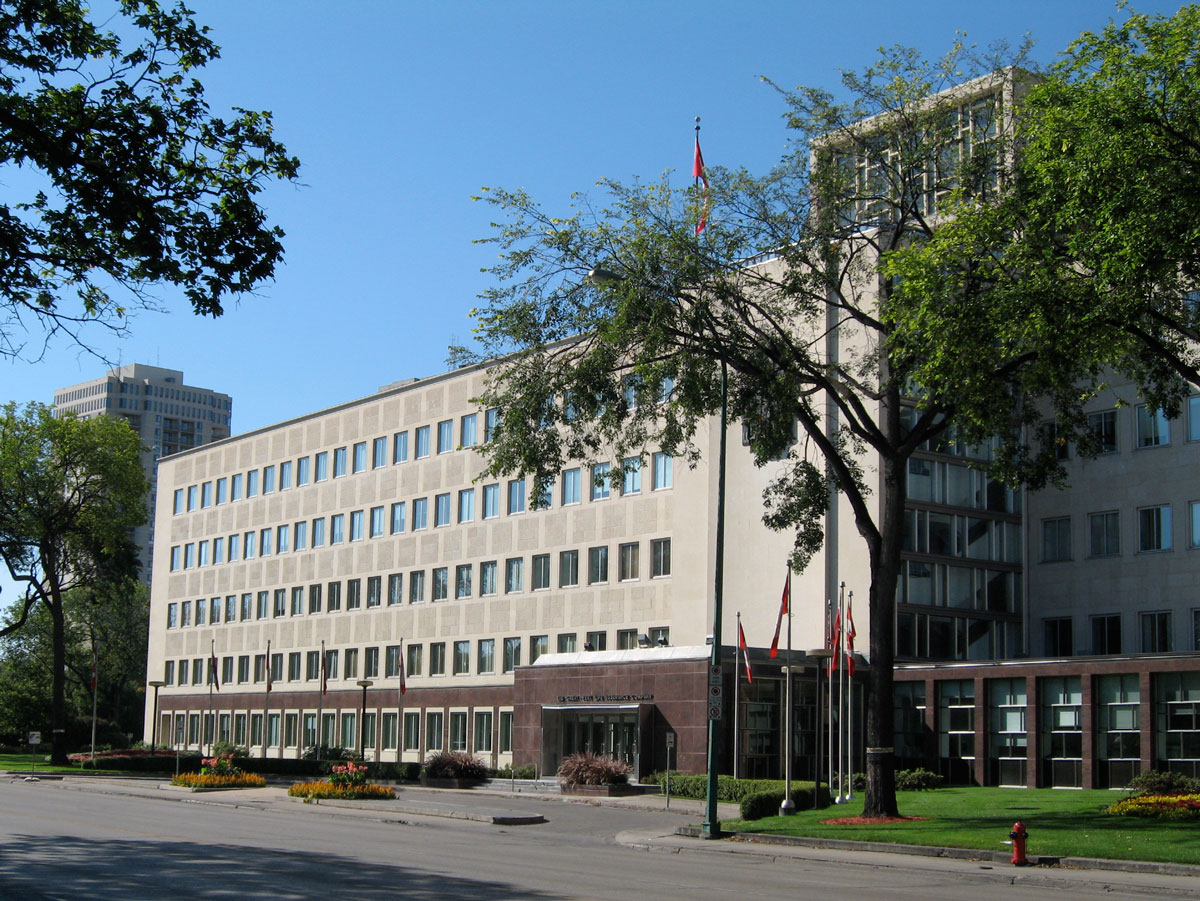 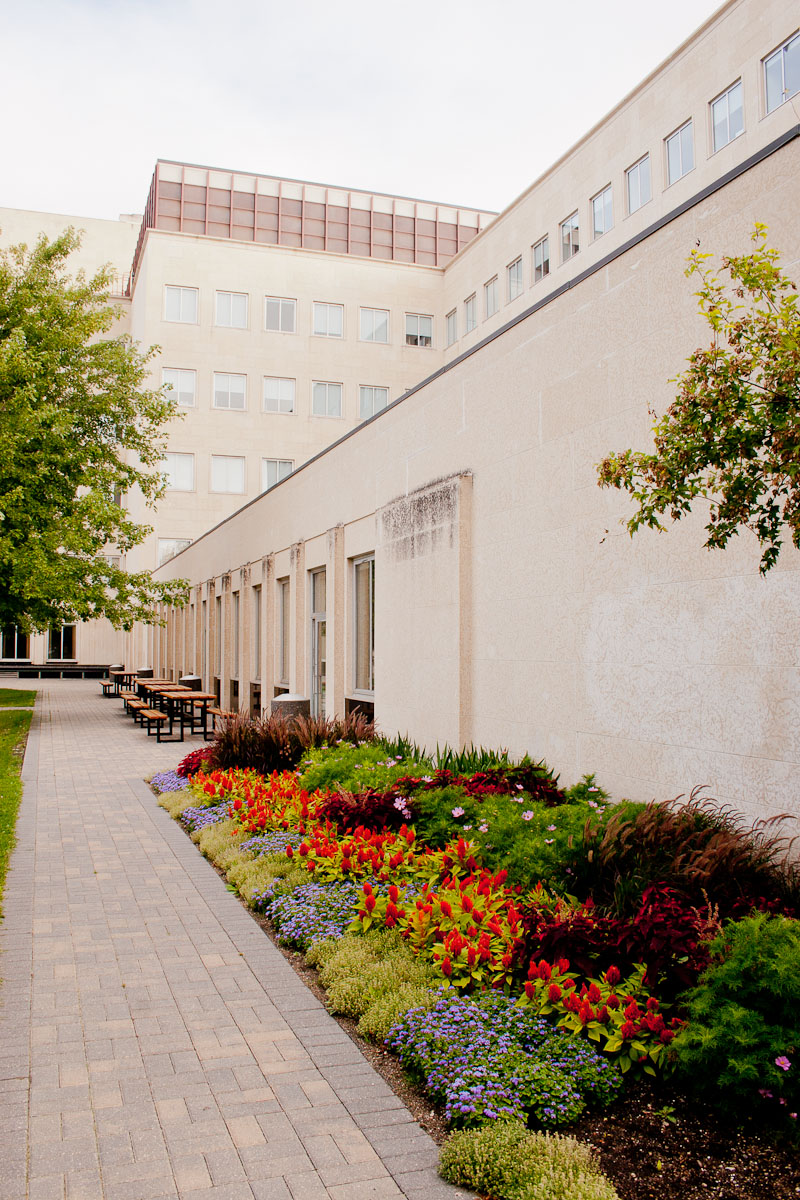 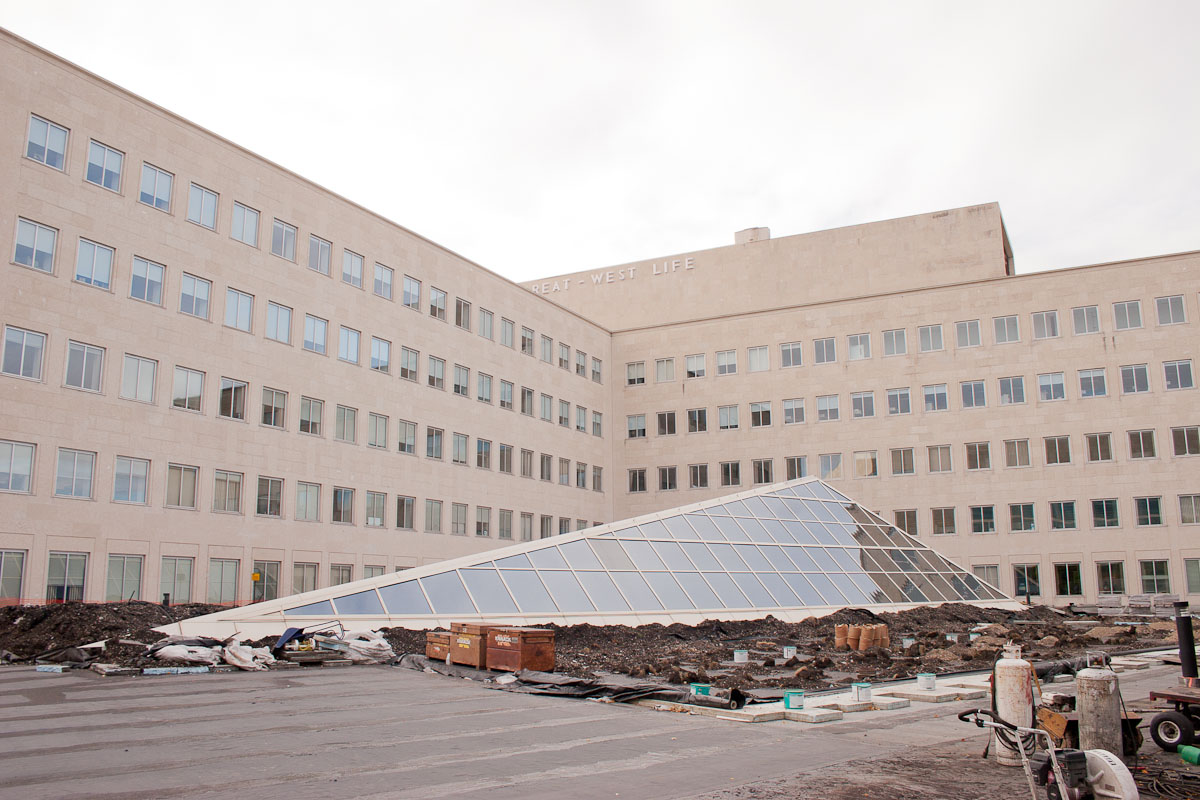 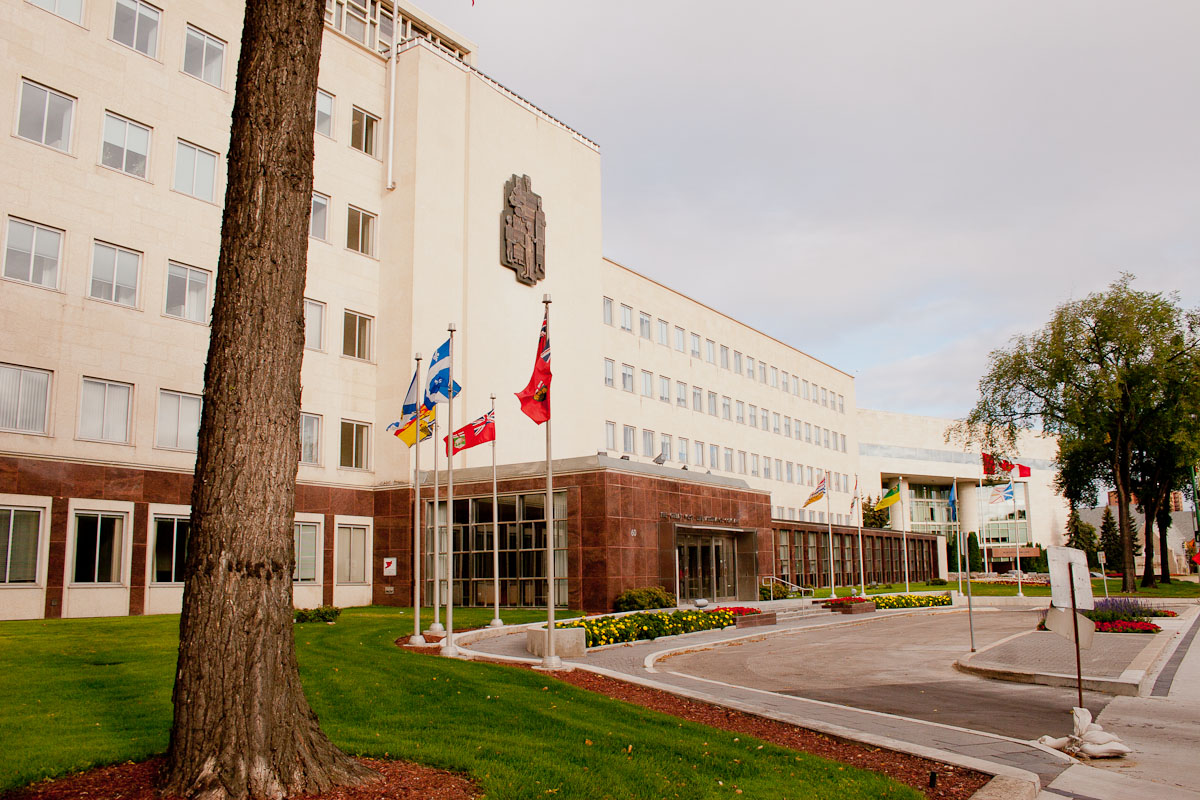 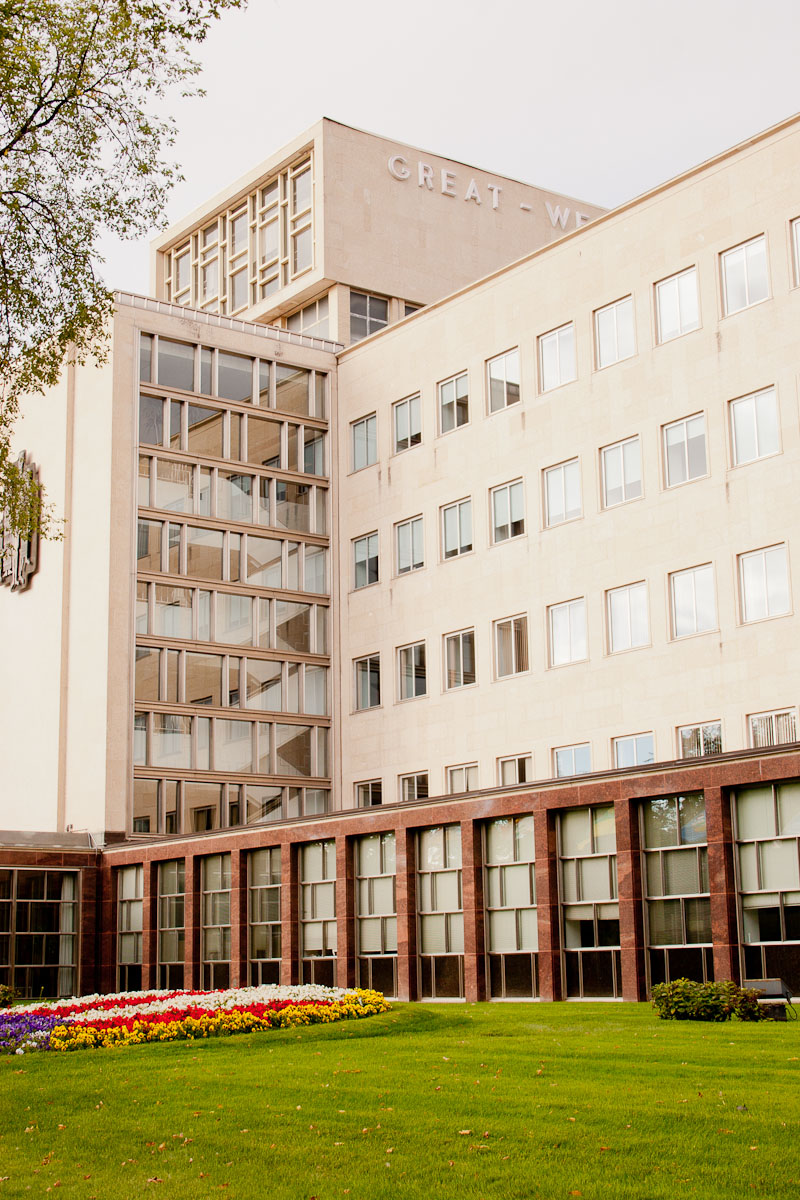 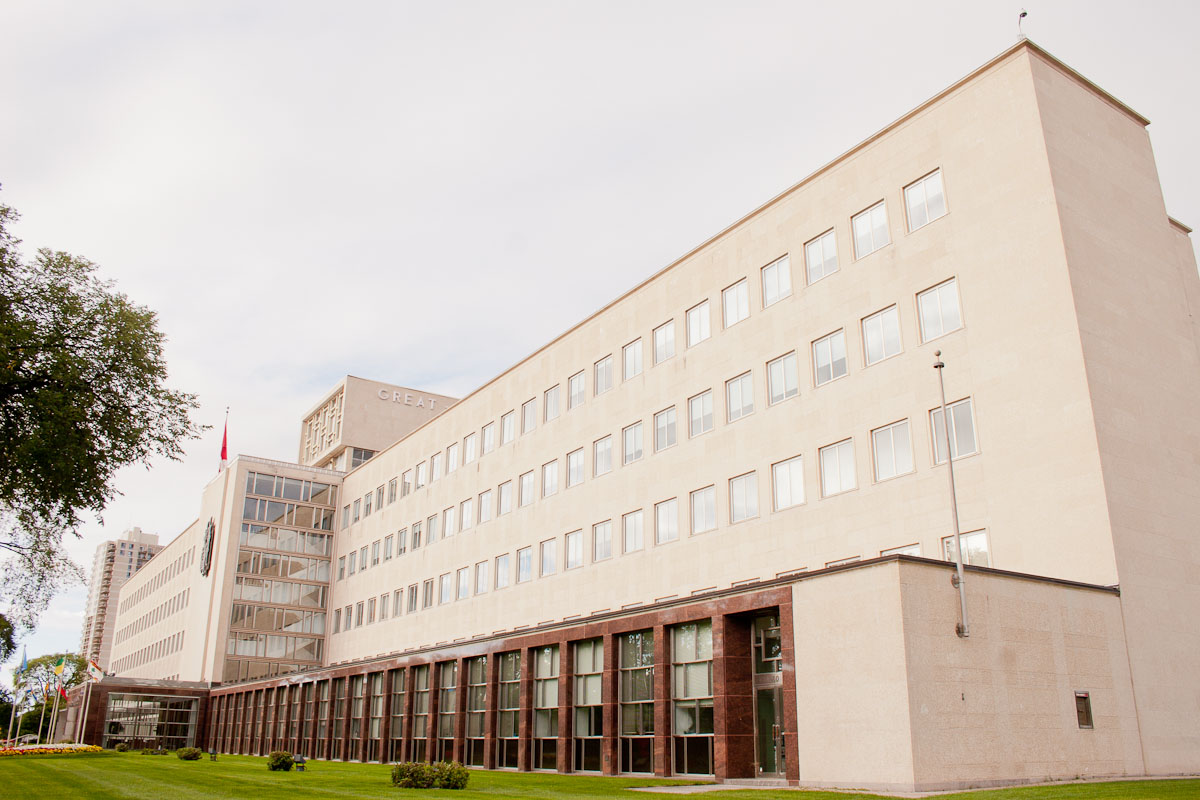 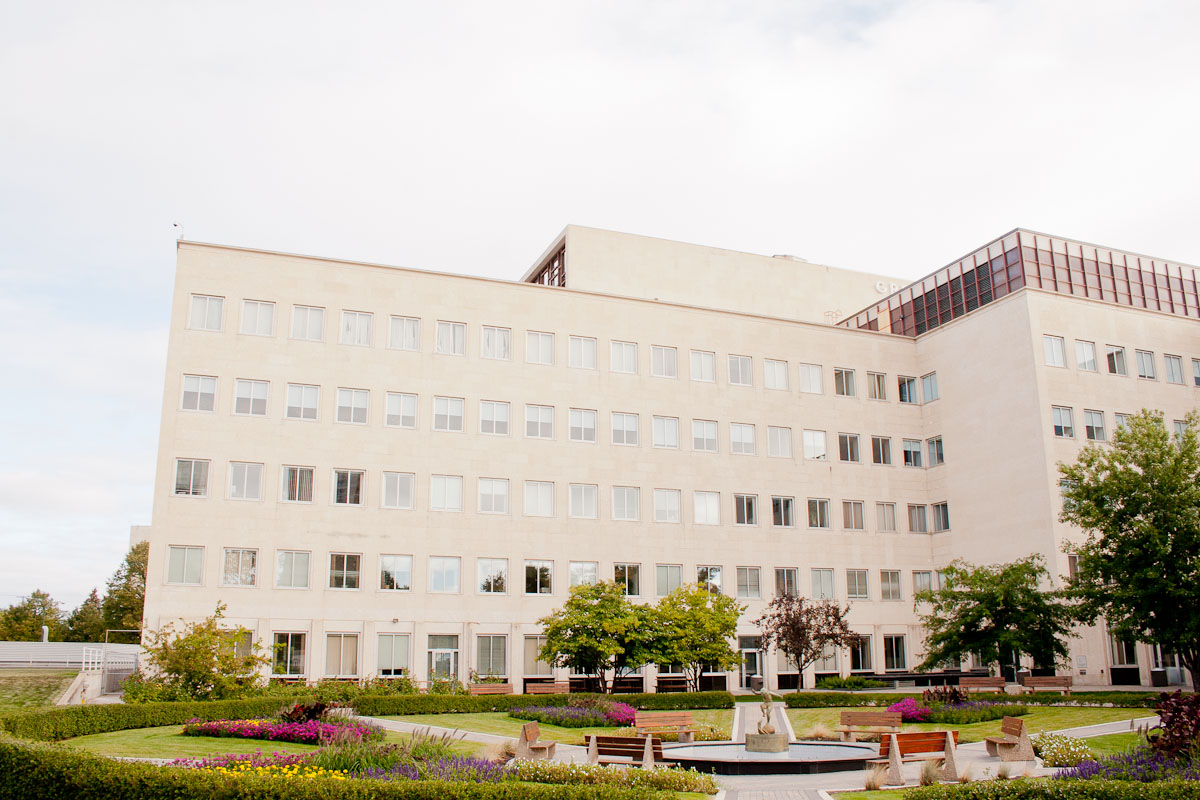 Construction began in 1957 for the head office of the Great-West Life Assurance Company, now the Canadian headquarters. Today, Great-West Life ranks in the top one percent of more than 1,800 life insurance companies operating in North America. Developed in Winnipeg in 1891 by Jeffry Hall Brock, the company began operations in a single room with five staff members. Early success in Manitoba led to rapid expansion across the country, based on a fundamental premise of pooling savings for protection and capital reinvestment in the community. The year 1906 saw the company step across the border with its first American branch in North Dakota. Its early rented offices paved the way for the construction of the first Great West Life building on Lombard Avenue at Rorie in 1911, which was given a four-story addition in 1923. The company purchased the nearly adjoining Union Tower at Lombard and Main in 1946 as a stopgap measure for space, but in 1953 the need for additional space was essential.

A large site (now 60-80 Osborne Street North) that had outlived its purchase came on the market. The site previously supported an indoor skating facility, the Amphitheatre, and the public Osborne Stadium. The company acquired these properties, along with a collection of private dwellings and small commercial properties. Whitehall Avenue closed, Mostyn Place opened and the site, and buildings, were levelled in 1956. This produced an expanse of 8.5 acres (3.4 hectares) on Osborne Street North. Shea’s Brewery, a large beer plant to the north of this property, remained for many years after, its vestigial Labatt’s beer vendor remaining on site well into the 1970s.

Contract for design was let to Toronto architects Marani and Morris and the local firm Moody Moore and Partners early in 1956. The Toronto firm had specialized experience in planning insurance company space, while the local firm understood the circumstances of local climate and soil conditions. Great-West Life was thorough in assessing its spatial needs and developed close cooperation with the design firms. The resultant design was a broad horizontal plan, five storeys, in a T-shape with a square footage of 219,000 and options for future expansion. With a cladding that combined rough and smooth faced limestone panels with granite outlining the ground floor, the new structure was made to be respectful of its venerable neighbour, the Legislative Building.

The interior plan grouped departments in one area with interior planning for efficient interaction. Each of the three wings in the T-shape, north, south, and west, intersected at the service core with escalators and elevators to facilitate traffic flow. Public departments--mortgages, group claims and medical examining offices--were placed on the ground floor near the front of the huge structure. The Bank of Montreal opened a branch in the northern wing of the ground floor concurrently with the rest of the building and stayed there until the mid-1990s.

Because of its proximity to the Assiniboine River’s flood plain, elaborate measures were undertaken in both planning and construction. Caissons were sunk to bedrock, approximately 55 feet below grade. Within the 2,600 tons of steel framework were laid Flexicore precast concrete floor and roof slabs, the hollow cores used as raceways for cable. The only place where these precast cellular slabs were inappropriate was on the north wing of the fifth floor, where loads from large pre-computer machinery required the additional strength of reinforced site-cast concrete. Favourable weather kept General Contractors G.A. Baert Co., and the subcontractors ahead of schedule. The new building was opened on June 8, 1959 by Premier Duff Roblin.

Virtually every system installed in the new building was technologically advanced. Custom fabrics, millwork, aluminum windows, contemporary furniture, and the low-relief bronze-cast artwork over the main entrance were all custom fabricated. Paintings were chosen though a competition vetted by the Winnipeg Art Gallery.

In the 1980s plans went ahead for a new office to the immediate north of the site. Smith Carter Architects designed this new structure. While the 1957 structure shares a visual character with the Legislature, the new head office is more of a portal to the corporate portion of Broadway.

At the time of construction of the new head office, alterations were made to the 1957 structure, most notably the relocation of the cafeteria to a subterranean structure lit by a huge pyramidal skylight on the west side of the north wing. Underground tunnels and an above-ground parterre link the two buildings. Its significance to the Manitoba economy, its vast size and its manicured grounds and gardens make Great-West Life a Winnipeg landmark.