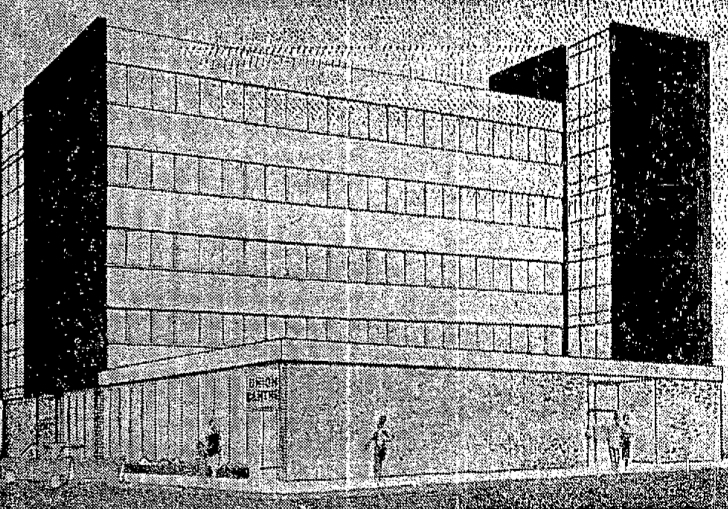 570 Portage Avenue, then known as the Manitoba Union Centre, officially opened its doors on 2 November 1963. The building, a five-storey modernist block clad in red brick, was first conceived as a project by members of the CIO-CCL union building committee, whose offices were located at 536 Main Street in Winnipeg. Genuine momentum was gained in the years following the merger of the Canadian Congress of Labor and the Trades and Labor Congress of Canada into the Canadian Labor Congress, which occurred in 1956. The Union Centre, as it was first constructed, provided office, meeting and recreation facilities for participating unions; these spaces were comprised of seven meeting halls capable of accommodating groups ranging in size of 15 to 125 people and an auditorium able to hold 500. Also included in the initial design were beverage room facilities for the members of participating unions. The original unions involved numbered the Manitoba Federation of Labor, the Winnipeg and District Labor Council, the Canadian Labor Congress, the United Automobile Workers and Transit Workers, the United Steelworkers of America, United Packinghouse Food and Allied Workers, and the Canadian Brotherhood of Railway Transport and General Workers. The building’s publicity materials also boasted to full air-conditioning and automatic elevator service. The contractors responsible for construction were Pearson Construction, with Dwight R. Johnston, of St. James, the architect. Estimated buildings costs were $750,000. In the years since the structure served as the Union Centre and today, the lower level office and auditorium spaces – which reach the public sidewalk – have been converted into retail units.