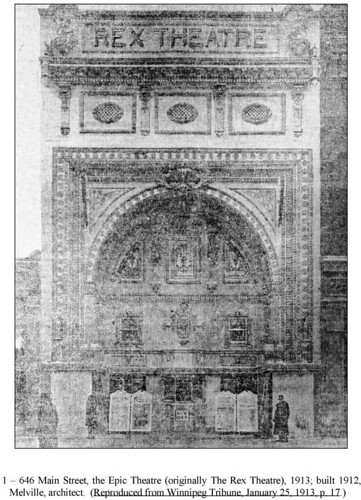 The Rex Theatre, also by Alexander Melville, was a long and narrow two-storey building. After its construction in 1912, passers-by were treated to a mixture of classically inspired ornamentation, flashing lights, and marble. The entrance was set back under a richly ornamented and extravagantly lit archway. This type of arched front became known as a “Coney Island Front” and was used extensively throughout North America. Early illustrations suggest that the theatre’s name figured prominently across the parapet. The exterior once consisted of marble slabs, engaged columns, and detailed stucco reliefs featuring trumpet-playing cherubs.

Inside, a barrel-vault ceiling emphasised the length and narrowness of the auditorium space that held 850 patrons. The stage included space for a small orchestra and organ. Some of the noteworthy interior details included marble stairs and wainscoting, decorative plaster work, mosaic stone flooring, oak trim, and brass railings.

Owner Robert Lorne Richardson built the Rex specifically as a movie house. There were several other theatres on this stretch of Main Street including the Columbia, the Starland, and the Colonial. In about 1923, the theatre’s name was changed to the Regent. After the Richardson family sold the property in 1929, there was a succession of individual and corporate owners until the building was demolished in 2008.