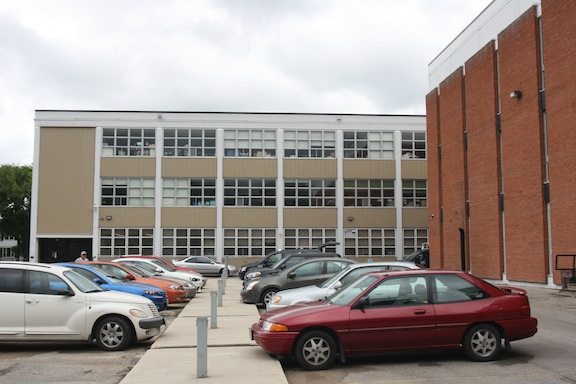 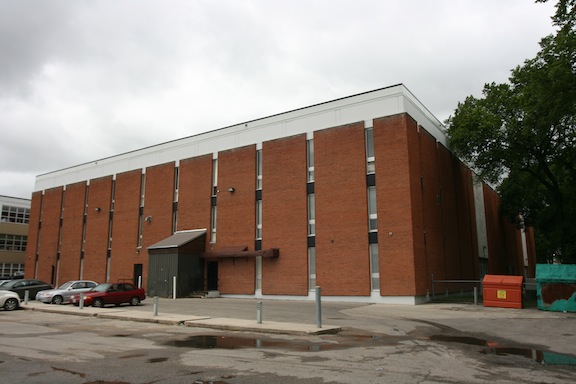 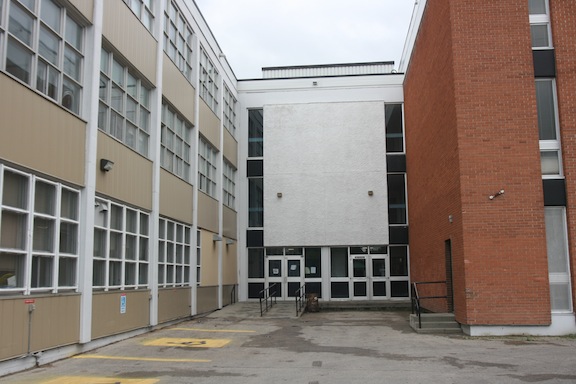 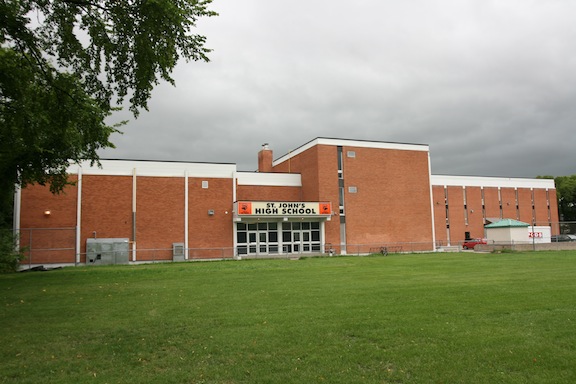 By 1905, a new residential area had grown up along the Red River north of the Redwood bridge. This was a well-to-do residential area. The school board had secured a site on St. Cross Street between Polson and Luxton Avenue. Here an elementary school was built and named Luxton School. It was in this school St. John’s Technical High School had its start.

Since 1896, the trustees had authorized a commercial course at the Central Collegiate. There had been a growing realization of the necessity for Practical Arts courses. The great stimulus to the inclusion of Practical Arts came in 1900 when Sir William Macdonald of Montreal, having resolved to “lay the foundations of technical training across Canada,” chose Winnipeg as one of several experimental centres and paid the costs for three years of a manual training course in Grades 5,6 and 7.

The only high school of the city during this period was Central Collegiate. However it was located a long way from the homes of the northern section of Winnipeg. Because of the distance factor and that the Central Collegiate was crowded, soon after 1900 the need for a new high school in the north end became evident. Local educational authorities first experimented to find the most suitable location for the new school. This was begun in 1909 when high school classes were set up in one of the existing elementary schools. In the autumn of 1909, Mr. E. Garrett, of the staff of Central Collegiate, was assigned the task of forming a new educational institute in the northern part of the city - an institute which is now known as St. John’s High School.

The little school as first formed had 98 students and four teachers, and occupied a few rooms in Luxton School. Mr. Garrett was principal of the new school for only three months before being transferred to assume the principalship of the other new high school, Kelvin. In January, 1910 Mr. A.C. Campbell was appointed principal of St. John’s. The first graduating class of 28 students left St. John’s (Luxton) in the spring of 1911. However, as classes came into the new school, it became evident that Luxton School could not accommodate them all. The trustees decided to build two technical schools, institutions that would not only “comply with the demand that education prepare for the requirements industrial and commercial occupations...have a direct application to the activities of the community, but as well provide accommodation for the increasing number of academic students.” So they raised the money— some $800,000—and had plans prepared. And at last, in 1912, Kelvin Technical High School and St. John’s Technical High School were opened. The Board felt very proud of their newest high schools when Sir Gilbert Parker, famous British- Canadian novelist, declared them to be the finest institutions devoted to a broad education. In March 1912, the high school classes were moved to the second floor of the new St. John’s building. The senior high enrolment increased very rapidly from some 160 in 1912 to 500 in 1914. The student body of St. John’s was just established in the new building when the First World War broke out.

Many students, staff members and graduates enlisted for overseas service. The Honour Rolls in the halls of St. John’s indicate how the war affected the student population. There were 25 graduates who gave their lives, and the list of those in the services numbered 209. In order to fill all the classrooms at St. John’s, empty classrooms were filled with elementary students. However, as each year brought more high school students, these classes were gradually withdrawn. By 1925, under the principalship of Mr. Campbell, the total enrolment was over one thousand. When Mr. Campbell left St. John’s to become principal of Daniel McIntyre, Mr. G.J. Reeve was named principal. Mr. Reeve had been on the St. John’s staff since 1913. The new principal’s philosophy of “student responsibility” was implemented from the very beginning, and during the next twenty years this fostered in the classes high ideals of citizenship and pride in good work.

In the fall of 1925, the first student council was organized. Teacher Mr. A.W. Muldrew was given charge of conducting elections. The Executive of this first council were: Edward Frehs, president; Eva Blankstein, vice-president; Don Krendel, secretarytreasurer. The large wall plaque on the main floor corridor gives a complete list of the presidents during the past 67 years. During 1925-26 a group of students under the guidance of Mr. H.E. Snyder, undertook the first school publication/yearbook called the “Torch”. However, due to lack of student interest the publication was dropped. In 1930 Mr. Snyder was again instrumental in a second yearbook attempt. This time he made sure there was enough student interest. In a group of boys of Room 40 he found both the desire and the interest and the “Torch” of 1930-31 was the result. The editor-inchief was William R. Lee. The early 1930s brought the Depression and with it many changes around St. John’s. Overcrowding in high schools continued. Many older students couldn’t find work so they stayed in school thus increasing the problem for the School Board. In 1932, as an economy measure, the board decided that Grade 12 would be cut from the high school program. However, the school system did not abandon these young people altogether. Youth Centres in the high schools were opened to provide recreational, cultural and vocational activities. On its first night, 1,100 young people registered at St. Johns. It was so popular that sessions were held not only in the evening but after regular school hours, even during school hours; the total number enrolled, more than 6,000. In 1939, grade 12 courses were once again offered but for a $40 fee. For the second time in the school’s history, war once again made its presence felt at St. John’s. A cadet corps was formed in 1940 and later (1943) it became the John Baskerville Air Squadron. The school had a students’ War Effort Committee, which guided the student body in salvage collection, Red Cross work, buying War Saving stamps, and sending parcels to the St. John’s graduates in the services. The list of graduates who were killed while in the services grew from year to year, and by 1946 reached 149. Of these a number had brought special honour to Canada and St. John’s. In 1946, when administrative duties increased Mr. D.N. Ridd was appointed vice-principal to assist Mr. Reeve. For many years previous to 1945, various types of awards had been given to outstanding students. However, there was no standard by which they were given. In 1945 the student council set up an awards committee which worked out a permanent system of awards. The form of the award was a bar which can be secured by participation in the various school activities. The students who during their high school careers secure 48 points or 4 bars are awarded the large “J” while third year winners secure a special school ring.

Another revision to the school system at St. John’s included the curriculum. An eight year study by the Commission of the Progressive Education Association and originated by an Articulation Committee, was conducted at St. John’s. The study was concerned with, first, the selection of suitable candidates for courses without having University-entrance requirements dominate the students’ choice of courses; and second, to help determine how free individual schools should be to adapt courses to the needs of its students. Unfortunately, the experiment had to be adandoned, for the simple reason that even though 9 out of 10 students were unlikely to go on to university their parents insisted that they be in matriculation classes. This negative view, that graduates of other-than matriculation courses must be inferior in some way, has long plagued the school system.

In June 1952, Mr. Reeve retired and Mr. Ridd became his successor; Miss E. McCord became viceprincipal. Up until this time the technical classes at St. John’s had been large and had played an important part in school life. However, with the opening of the new Technical Vocational School (Tec Voc), more and more of the classes were moved there. As a result of this trend, the high school classes became almost entirely academic. During 1955, Mr. L.A. McIntyre was appointed to fill the position of vice-principal when Miss McCord resigned due to illness. The 1950s hadn’t seen any decline in the scholastic standards of the school. In fact, in June, 1955, St. John’s students won three of the five highest awards made to Winnipeg high school students. In 1955, Grade 9 classes were assigned to St. John’s. In 1957, Mr. McIntyre was appointed principal of the Isaac Newton Junior High and Mr. Stanley N. McFarlane was named vice-principal in his place. This year also saw the famed “tower” taken down. The School Board had ruled the Kelvin High School tower and the St. John’s tower unsafe after a series of “concrete” tests on the floor of the old buildings.

In 1962 Mr. H. Guest became the 2nd vice-principal, necessary because of increased enrolment. In 1966, the newest addition to the school was completed and the changeover from the “old” building to the new was made during the latter part of December. The Official School Opening took place on Tuesday, March 7, 1967.

In the spring of 1967, the “old” St. John’s High School building, a landmark for over 56 years, was demolished and the address was changed from 480 Salter Street to 401 Church Avenue. In September, 1969, the school enrolment had reached a peak - 2,038 students, 711 junior and 1,327 senior high students. The increased enrolment necessitated the appointment of an additional vice-principal.

The storied St. John's High School has been the heart of the community for decades and this is the third school carrying the name on this site.Sections of the school are similar to Kelvin High School, as the two went up almost concurrently. Neither school was closed during construction. The first parts of the new school in 1960 were attached to the old building and eventually the connecting wall had to be demolished with vast skill.

The school has had little change and has retained a good integrity. Although the yard on the school site is not so large, it is adjacent to Machray Park on the west side, which is a square block in size