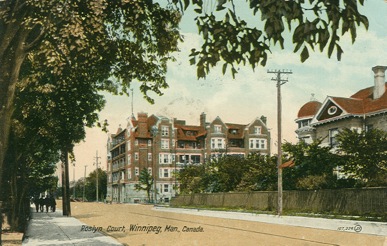 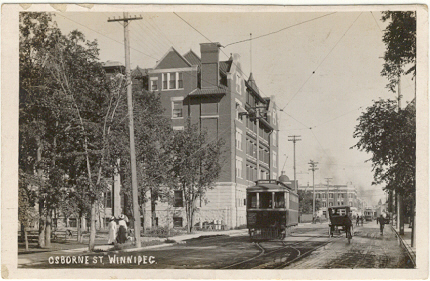 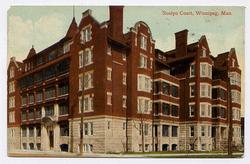 The Roslyn Court Apartment Block was designed by W.W. Blair, and constructed in the Queen Anne Revival style in 1909. The building is one of the finest Canadian examples of this style, which is characterized by asymmetrical plans, contrasting colours and textures, and varied rooflines. The Roslyn Court Apartments was the most expensive building to be built in its time—costing $212,500 in 1909. It is one of the few remaining Queen Anne Revival buildings that still maintains many original interior characteristics such as stained glass, fireplaces, and wood panelling and mouldings.

Unlike other apartment blocks which had to be subdivided to survive the depression of the 1930s, the Roslyn maintained the luxurious size of its 36 suites throughout. Although many features of the original design remain the same, a number of necessary alterations have been made: after the flood of 1950, the foundation was reinforced with concrete piles, and plumbing, heating, and electrical were all replaced, and in 1957, glazing was added to the Osborne Street facing walkways.

The original owner of the building was a prominent local physician, Dr. Richard Mattice. In 1919 he sold the building to Robert Campbell and W.G. Yule. In 1948, it was sold to local grocer Harry Bryn and then in 1969 to Saul Morantz. Since then, it has remained in the Morantz family. Globe Property Management owns and operates the building now, with Richard Morantz as their president and CEO.

The Roslyn Court Apartments is a municipally-designated historic site and in 1986, a plaque was erected in front of the block by the Historic Sites and Monuments Board of Canada. in 2016, a building renovation received a Conservation Award from Heritage Winnipeg.