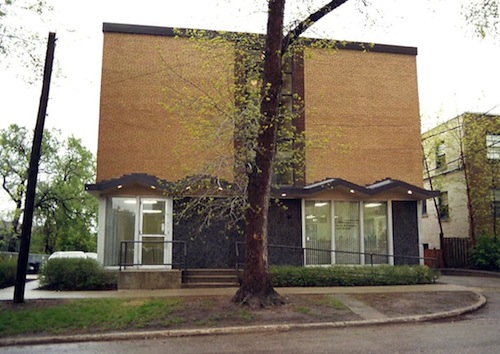 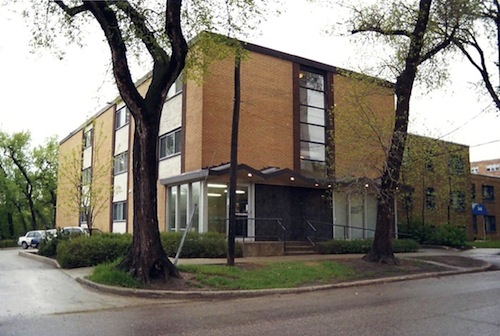 Designed by local architect Myer Kurnarsky, 340 Assiniboine Avenue was constructed in 1961. Through its three major variations in function, 340 Assiniboine Avenue has adapted without significant exterior alteration. It was initiated by a group of investors and headed by Bill Shell, a director of the Winnipeg Dental Supply Company of 348 Hargrave Street. Initially designed as a 22 suite apartment complex, catering to the singles' crowd; each unit had a 'kitchenette', with a large recreation area and wet bar. Shared laundry facilities were located in the basement.

Measuring 96'x40' in plan, the complex was constructed by Imperial Construction. Engineer H.A. Dalkie, of Cowin and Company, served as technical consultant on the reinforced concrete. Consideration was given on account of the site's position along the banks of the Assiniboine River. A central corridor, on all three floors, is naturally lit by glazing on both the front and rear elevations. The apartments are oriented east and west. Structurally the building is constructed of precast concrete block and steel, faced in light brown brick. The saw-tooth fascia over the front entrance remains, but doors on the west side of the north elevation have been removed. A metal screen over the central bank of windows, visible in a 1965 photograph, has also been removed.

Not long after its construction, possibly as early as 1963, the apartment hotel was purchased by Canadian Inns, a then small chain of western hotels. While it began as an apartment hotel and motor lodge, Canada House evolved to house corporate occupants. When the Salvation Army purchased the building in 1983, it was further adapted for use as the Catherine Booth Bible College. Dudley Thompson and Keith MacFarlane of the Prairie Partnership architects made extensive alterations which enabled the building to house a student body of 52 along with classrooms, a library, officers' quarters and communal dining facilities. In 1988, the Catherine Booth Bible College expanded to the former YWCA at 447 Webb Place.

After a couple of years being vacant, Canada House became the urban seat of the Dakota Ojibway Tribal Council and its affiliated agencies. Occupants have included the Dakota Ojibway Investment Company, Yellow Quill College and Dakota Ojibway Community Futures Development Corporation. Savino and Company law firm are also tenants in the building.