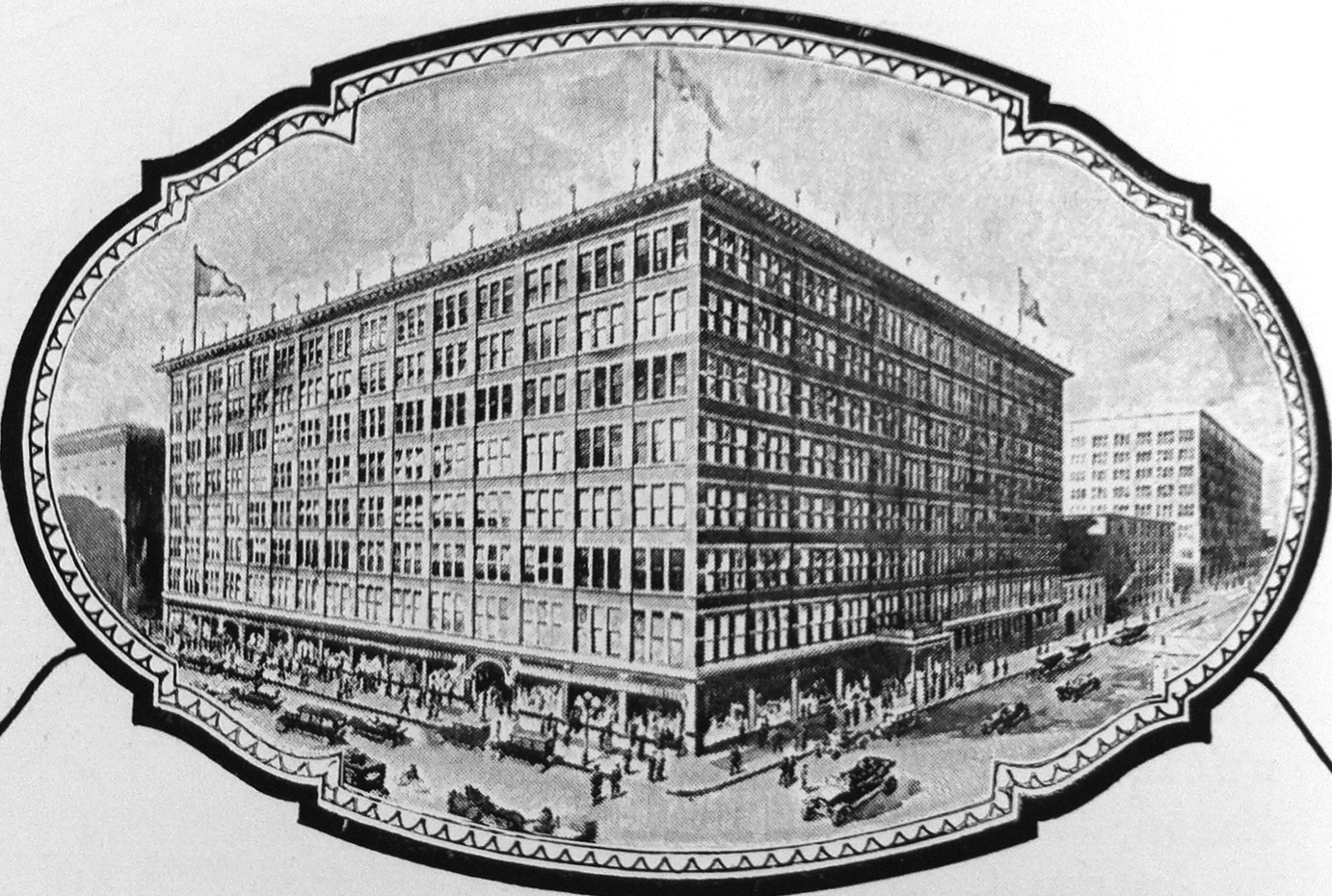 This eight-storey commercial store opened as a titanic landmark along Winnipeg's Portage Avenue in 1905. Built under the supervision of future Eaton's Company President John Eaton, the structure rose at a remarkable rate, having been started less than a year earlier. Originally only five storeys high, the building was nevertheless behemoth in scale, employing 700 people on its opening day.

The Eaton’s building was designed by local architect John Woodman. Its Chicago School architecture blended a slight cover of historically-minded detail with an adventurously bold formal approach, recalling the spare and crisp designs of the so-called "father of modernism," American architect Louis Sullivan. Like many of Sullivan's constructions, the Winnipeg Eaton's Building was held aloft by a steel frame, with cast-iron columns that supported 5.5-metre wood beam spans, themselves 45 centimetres in height. This structure allowed for an outer perimeter of walls which was far lighter in both reality and appearance, making possible the installation of many more and larger windows. This created an interior space that could be suffused with daylight. This openness was particularly noticeable at the ground floor, where 42 plate glass windows lined the building at sidewalk level.

In aesthetic terms, the exterior of the building featured a delicate balance of horizontal and vertical, with soaring brick pilasters defining slightly inset bays, while bands of stone marked the floor levels within. Beyond glass, the material palette was spare, featuring simply red brick and a buff-grey Bedford stone, with dramatically little decoration.

The Portage Avenue Eaton’s was the Eaton company's first department store built outside of Toronto. On opening day more than 25,000 people came to see the giant new facility. Among the other wonders offered by the store at its operational height were 29 elevators, three banks of escalators, and a sprinkler system that drew from wells 60 metres below. The store offered a fourth-floor resting lounge with easy chairs, writing tables and stationary provided by attendants, and telephone booth banks on the main, third, fourth, and fifth floors. The building’s telephone exchange used approximately 150 trunk lines, serving 470 phones, above and beyond those serving the payphone booths.

Another stunning piece of infrastructure was the almost six miles (9.66 kms) of brass tubing used to transfer cash for the use of the more than 125 cash registers. Further services included a check room at the main floor near Hargrave Street and a baby carriage shelter attended by a nurse, where patrons could leave their children while they shopped. For a period a children’s playground operated on the roof during the summer months. “The View from the Roof” viewing deck was nearby, offering “a splendid birdseye view of the city” 117 feet above street level.

On the ground floor were the Manitoba tourist information bureau and a post office adjacent to the large book section. Visitors could dine in The Grill Room, a high-end dining space with capacity for 260 people, or in the cafeteria (next to the Grill Room on the fifth floor), which had seating for 666. Light lunch counters were located on the third floor and in the basement.

In 2003 the building was demolished to make way for the current Bell MTS Place.