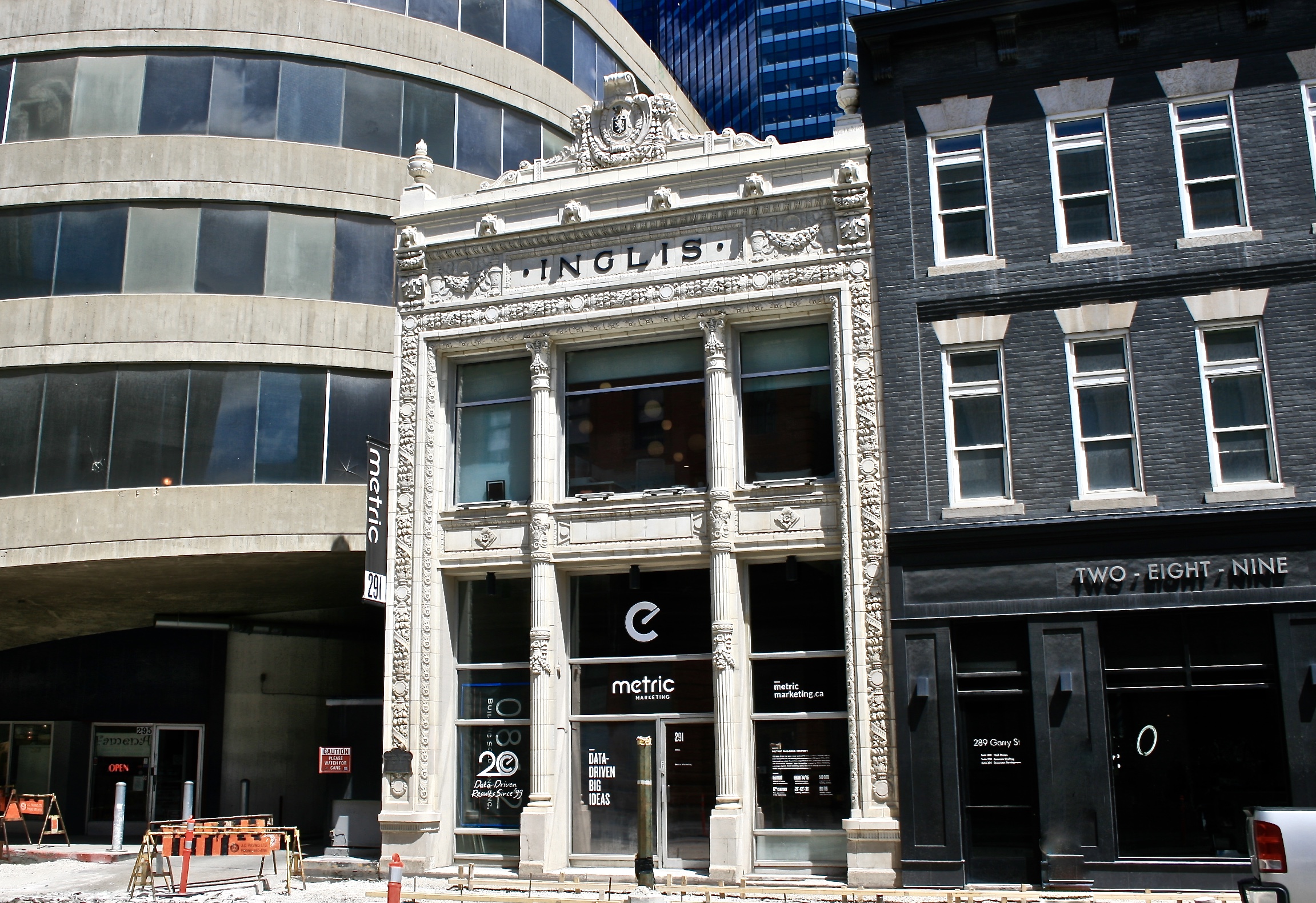 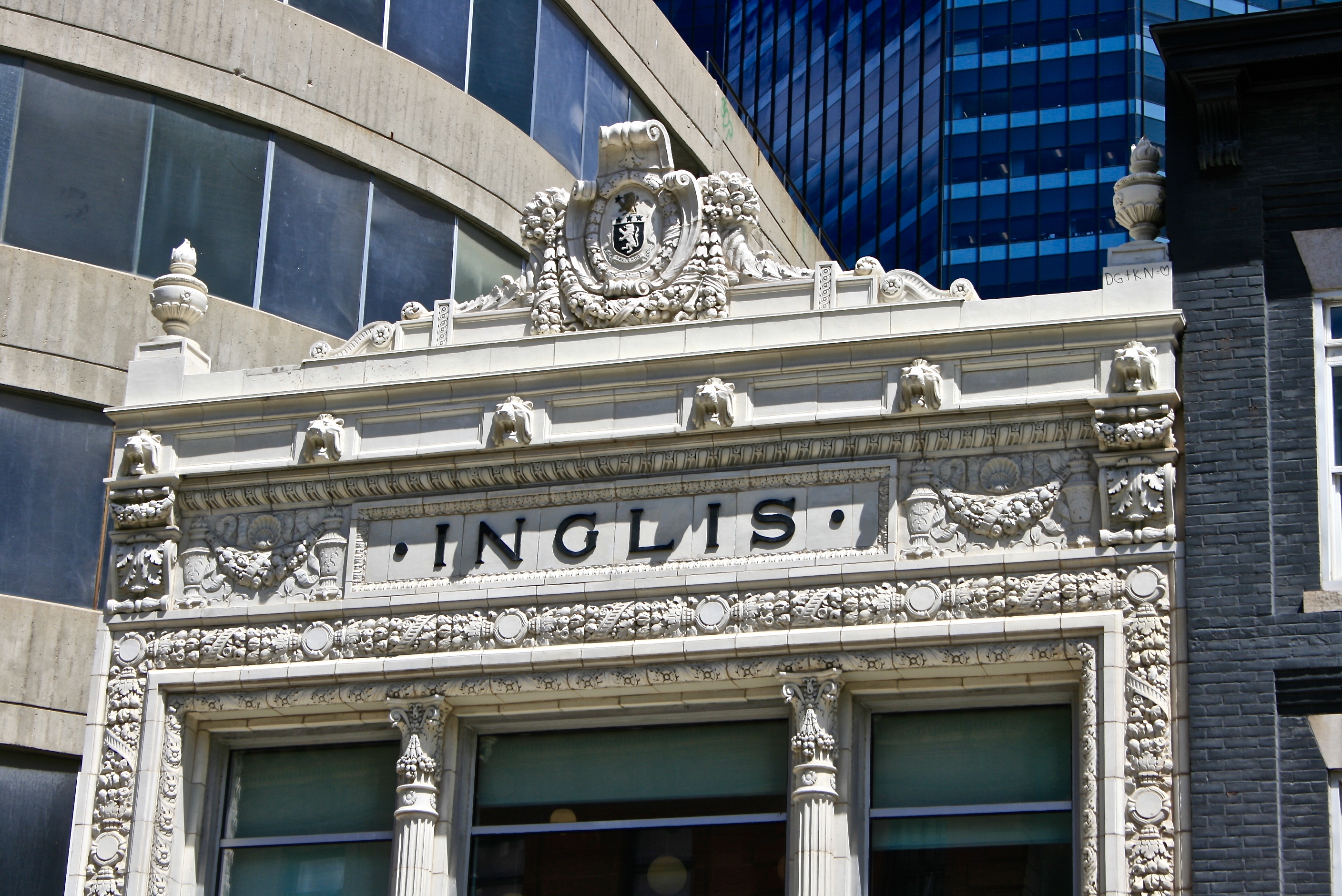 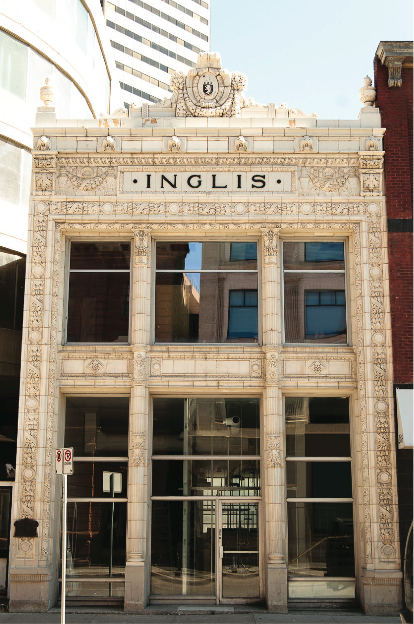 Atchison’s original building was a common two-storey brick structure which housed the Angelus Cafe, owned by A.F. Thomas. It was designed in the Chicago Style, as Atchison was known for designing much of his work based off of the style. The initial plan was to design a one storey building, but Thomas was unhappy with the size of the building and asked for an extension. Aitchison complied by extending the building upward with another floor.

In about 1914, Herbert Rugh was commissioned by the R.J. Inglis Company, a manufacturer of civil and military uniforms, to significantly remodel the structure. Numerous repairs were made and the fanciful white terra cotta was added to the face of the building. Today, a plaque on the building commemorates its “’fairytale facade’ of imported terra cotta”, a harvest of flowers, fruit and vegetables. Note the one splash of coloured terra cotta, the cobalt blue crest centred on the upper portion of the building. The interior of the building was also altered. A large showroom was designed at the front of the first floor as well as private and general offices and two fitting rooms to the rear of the store. The second floor held the work room.

In 1916 the building was extended to allow for more workroom space, washrooms, and storage. Hired once more for this job was Atchison whose alteration to the building brought it to its current size. Two renovations to the entrance of the building were done in 1946 and 1964. Both renovations left the facade in it’s initial condition with the exception of the 1964 renovation removing the marquee.

291 Garry Street has many defining features to it as its highly decorated with elaborate terra cotta work. Atop of the large second storey windows are the letters “INGLIS” which is surrounded by more terra cotta vegetation and 6 lions heads. The parapet of the structure holds a large shield and crest with is bookended by flaming urns. In 1945 the Inglis lettering was removed and replaced by NWCTA, North Western Commercial Travellers' Agency, but the Inglis lettering was restored and remains atop the building.