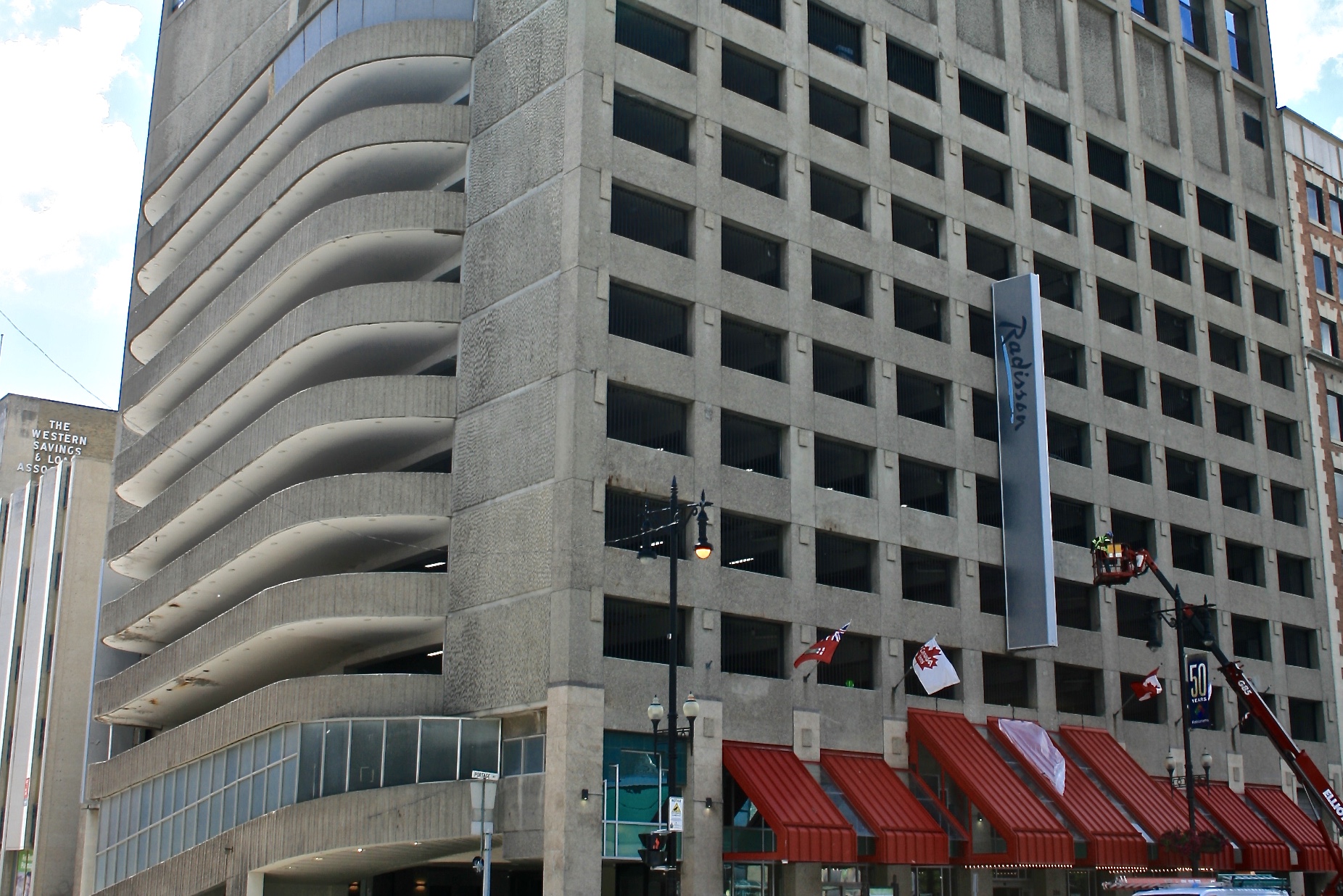 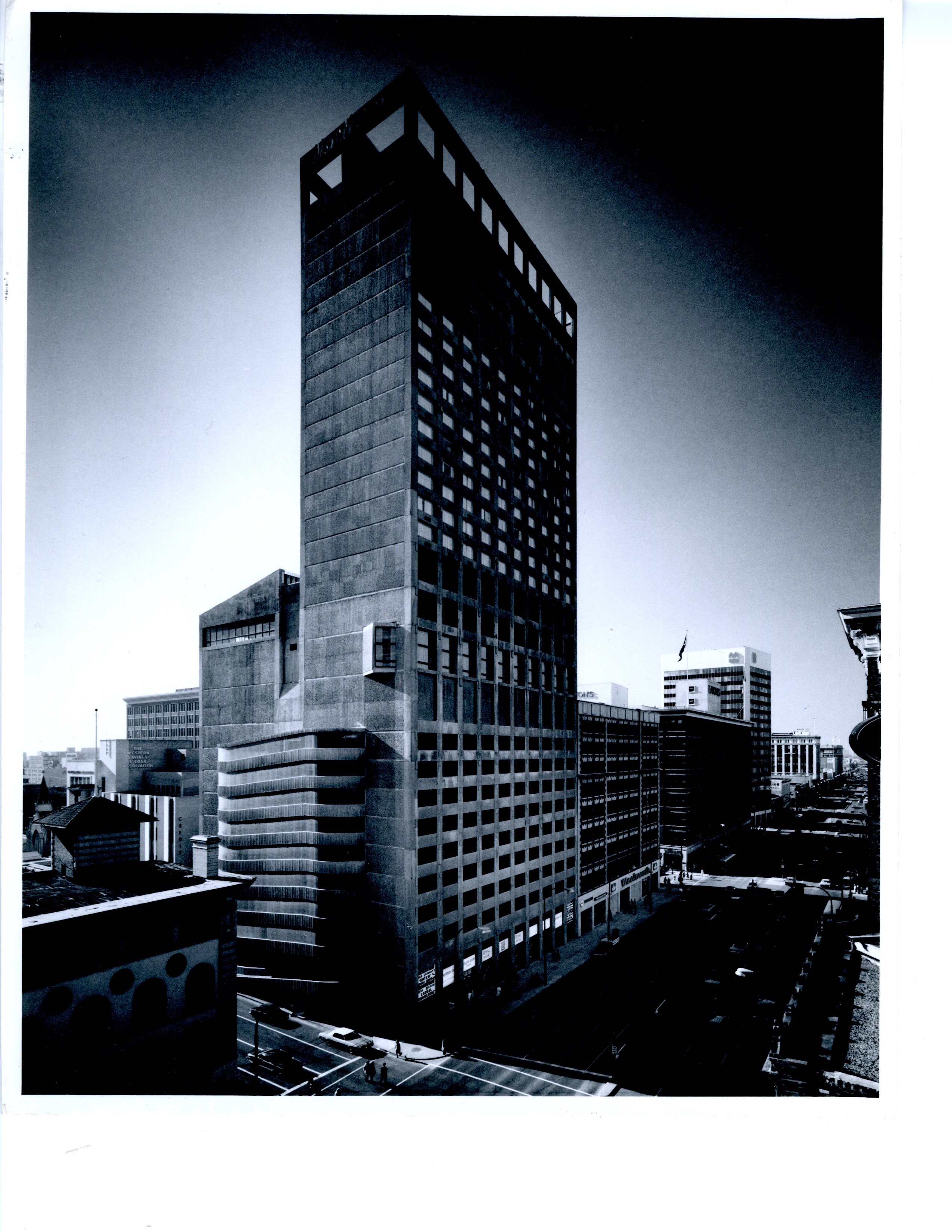 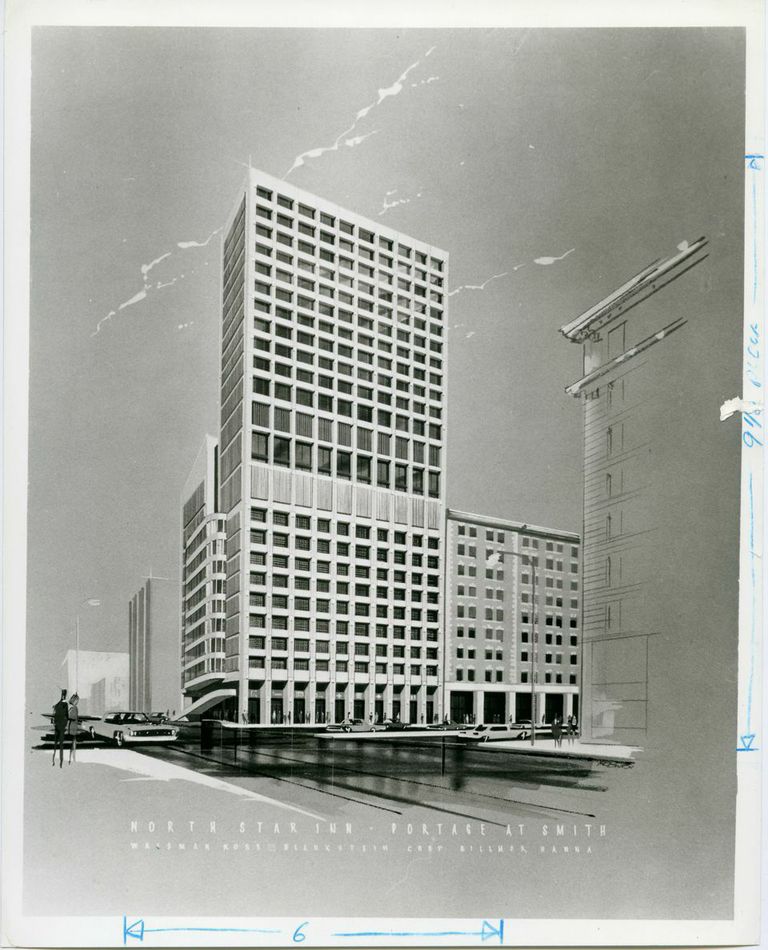 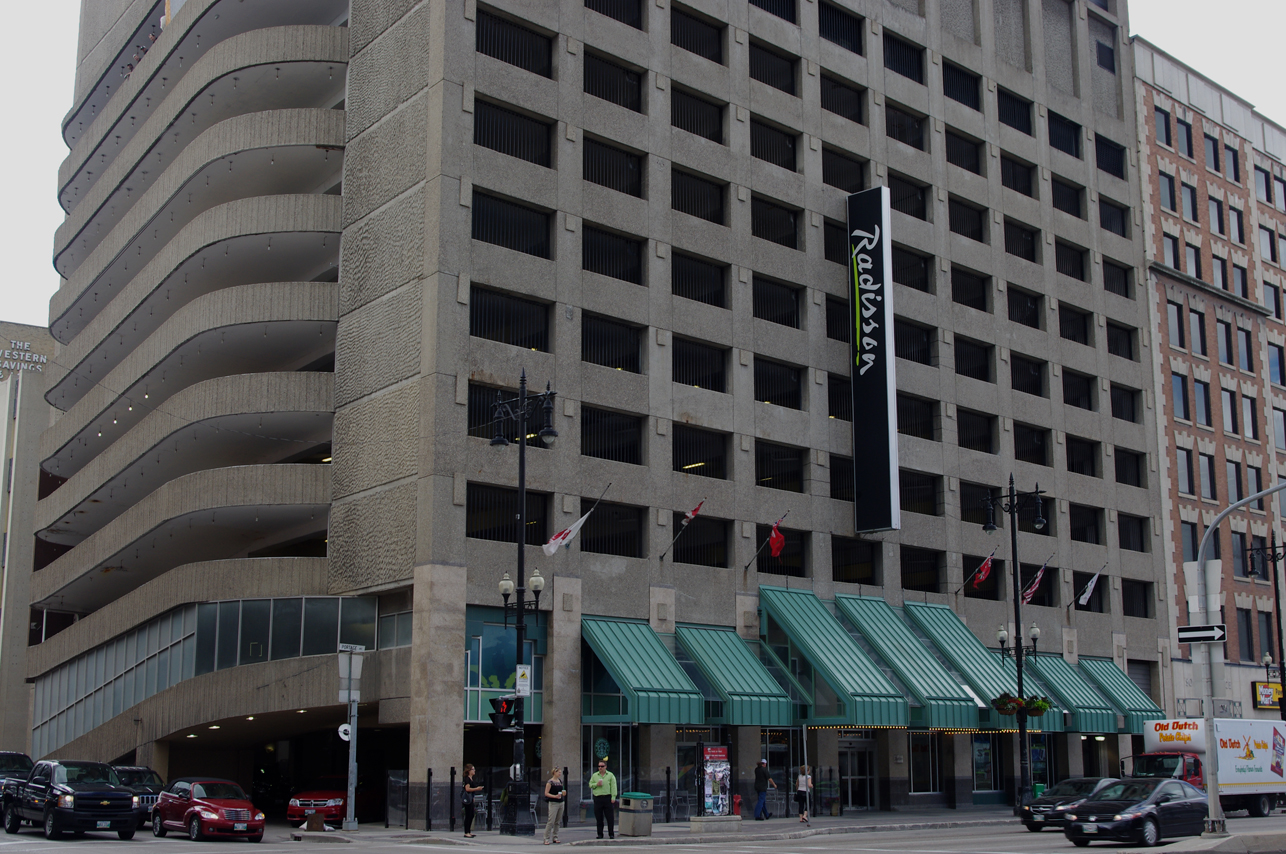 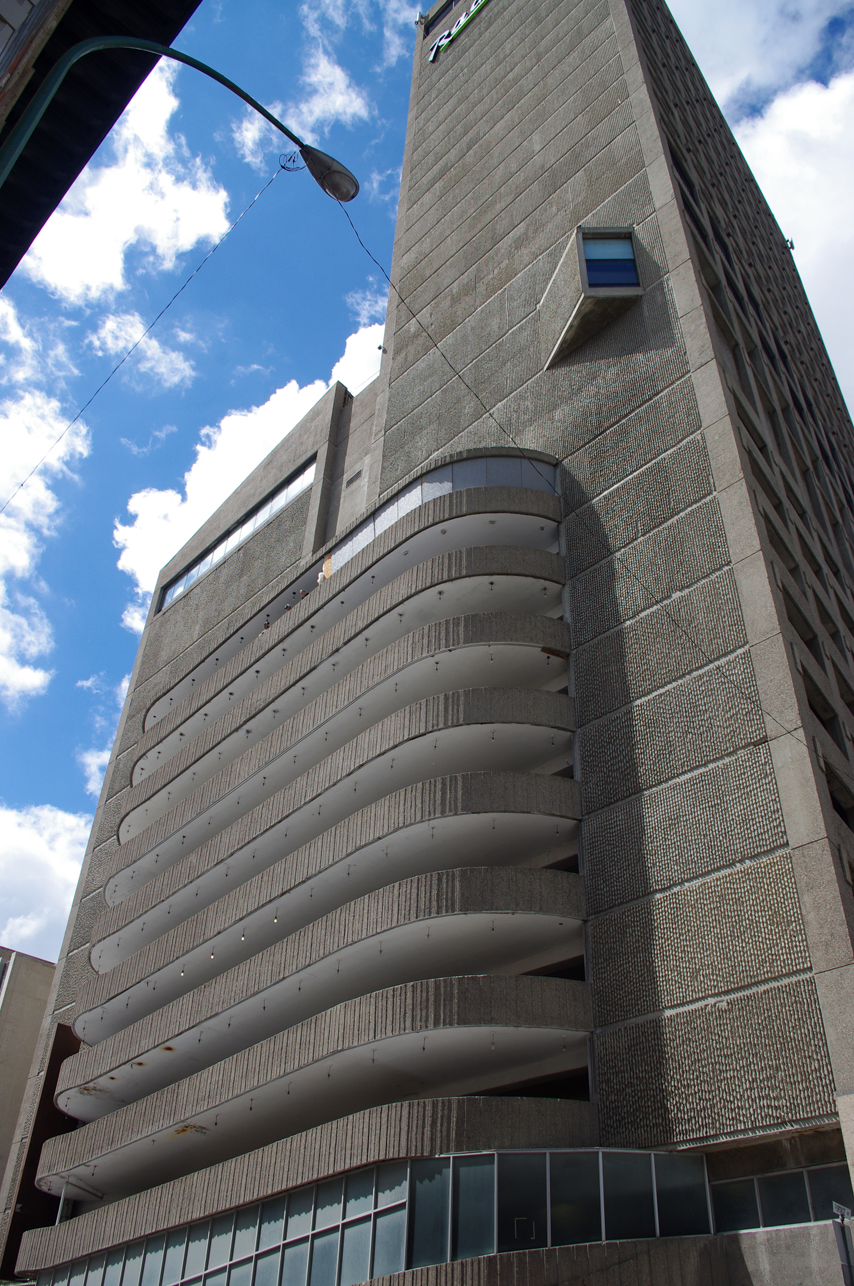 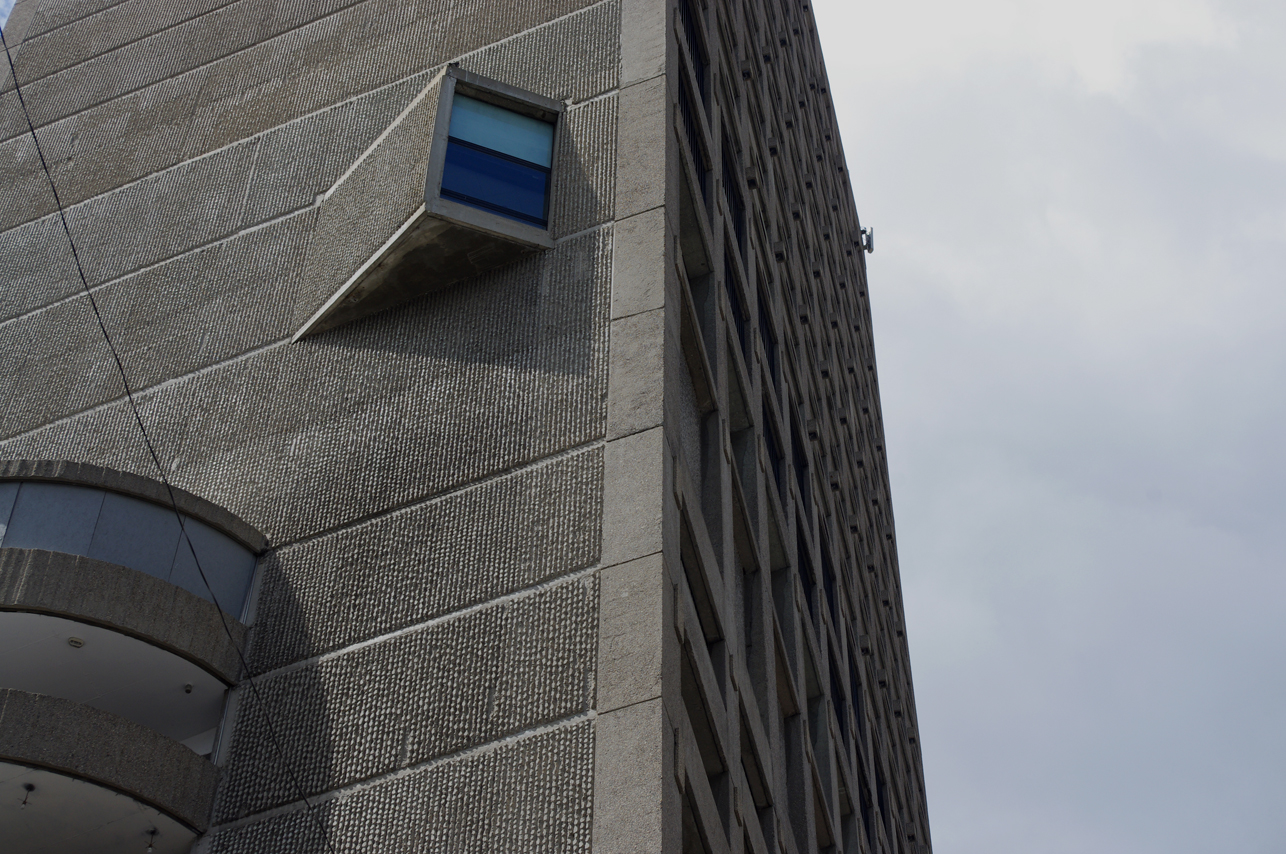 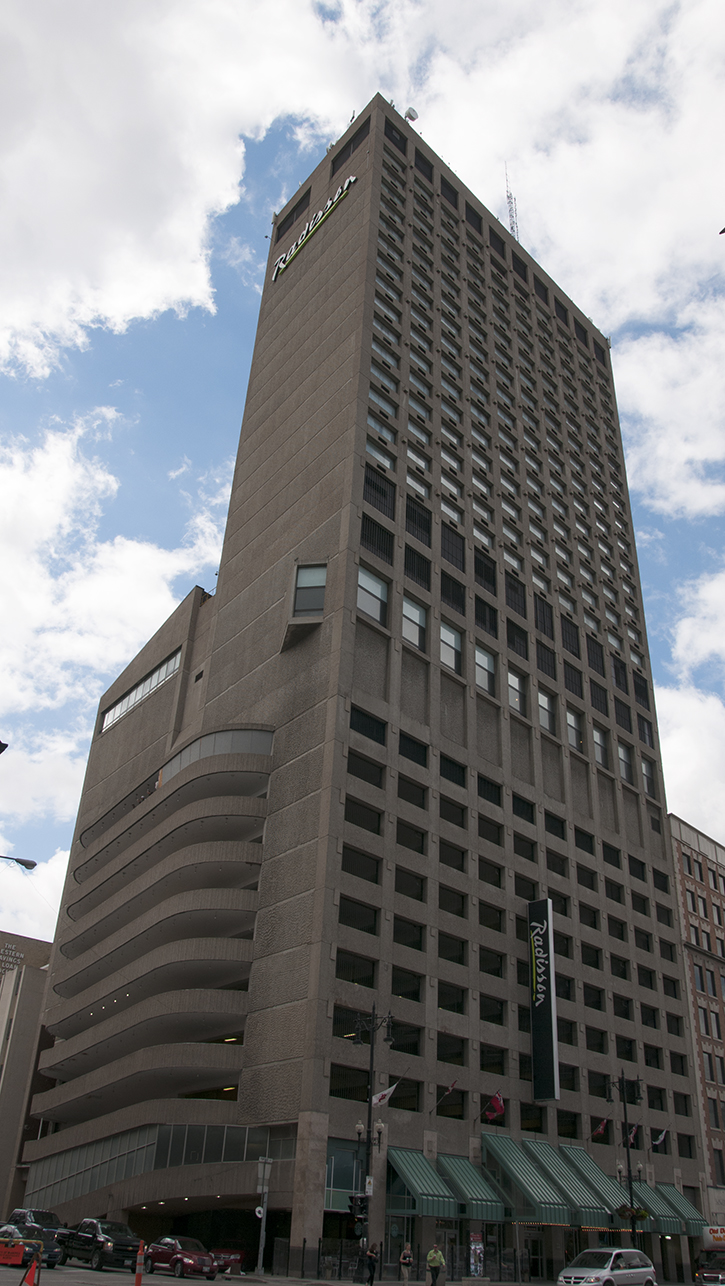 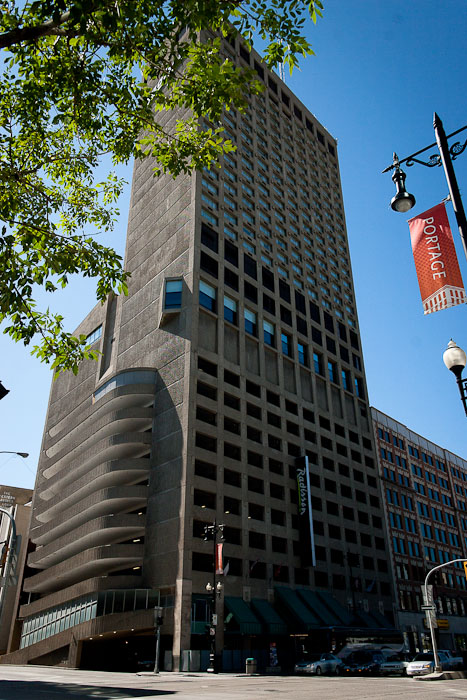 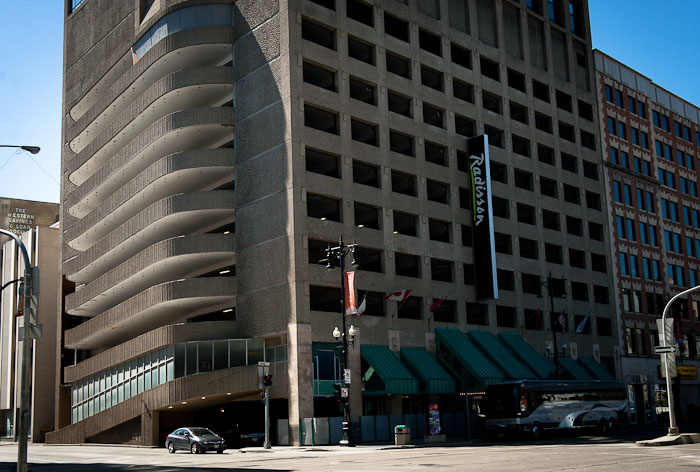 Previously the site of the Lyceum Theatre, the owners, Famous Players Canadian Corporation. For many years the hotel was designed with two movies theatres at the base. However, the popularity of the theatres dropped throughout the years and by 1999 the theatre closed. It was revived in 2000 by Famous Players, but would close for good in 2001.

Designed by local architectural firm Waisman Ross Blankstein Coop Gillmor Hanna (now Number Ten Architectural Group) in collaboration with design consultant Leslie F. Girling & Associates, also of Winnipeg, 288 Portage Avenue was constructed between 1968 and 1971. The twenty nine-storey building and corresponding nine level parking garage were built with an exposed post-tensioned concrete structure.This soaring structure, which was originally built for the CP Hotel chain, is another example of the adoption of Brutalist aesthetics for commercial high-rise construction. Notable features in this regard include the ample use of striped and raw “corduroy concrete” walls and the exploitation of the plastic qualities of concrete in the fabrication of the unconventional projecting window bay and dramatic, south-facing, cantilevered balcony.

At the time of construction the design was unusual – the public areas and hotel rooms are in the upper portion of the building, stacked above an integrated parkade. The original hotel also included two basement cinemas, a pool and workout room, restaurant and café and a walkway connection to the now demolished Eaton’s department store. These details lent the facility a city-in-a-tower aspect reminiscent of the modernism of the pioneering French-Swiss architect Le Corbusier, illustrated in his Marseilles apartment complex Unité d'Habitation. Among other such features was the original location of the registration desk registration was on the twelfth floor, the original twelfth floor dining rooms and further such spaces one storey above, as well as, circa 1971, a newsstand on the same level. These dining spaces featured panoramic views of the city and departed from a modernist aesthetic, with one of the twelfth floor spaces decorated in purple and ivory and known as the House of Lords; this space was later replaced by a garden-themed cafe. CP Hotels, a division of Canadian Pacific, took over operation of the hotel in 1971 and renovated some of these areas. Further renovations altered some areas in the late 1990s.