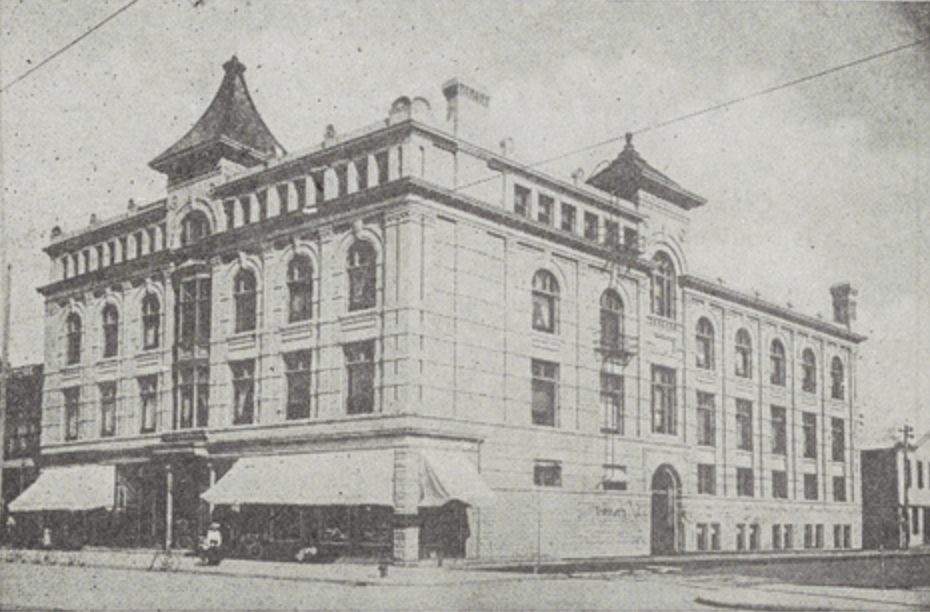 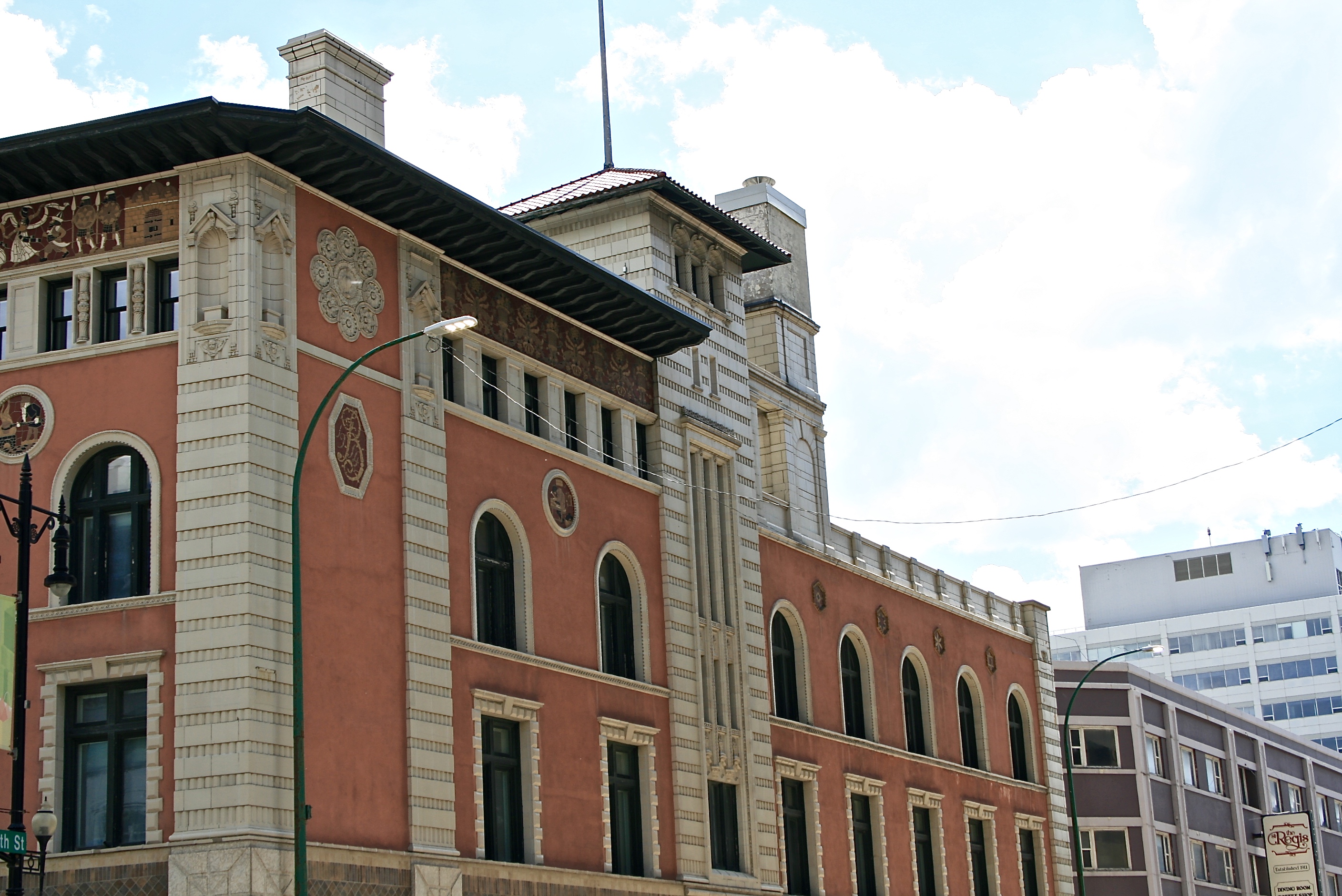 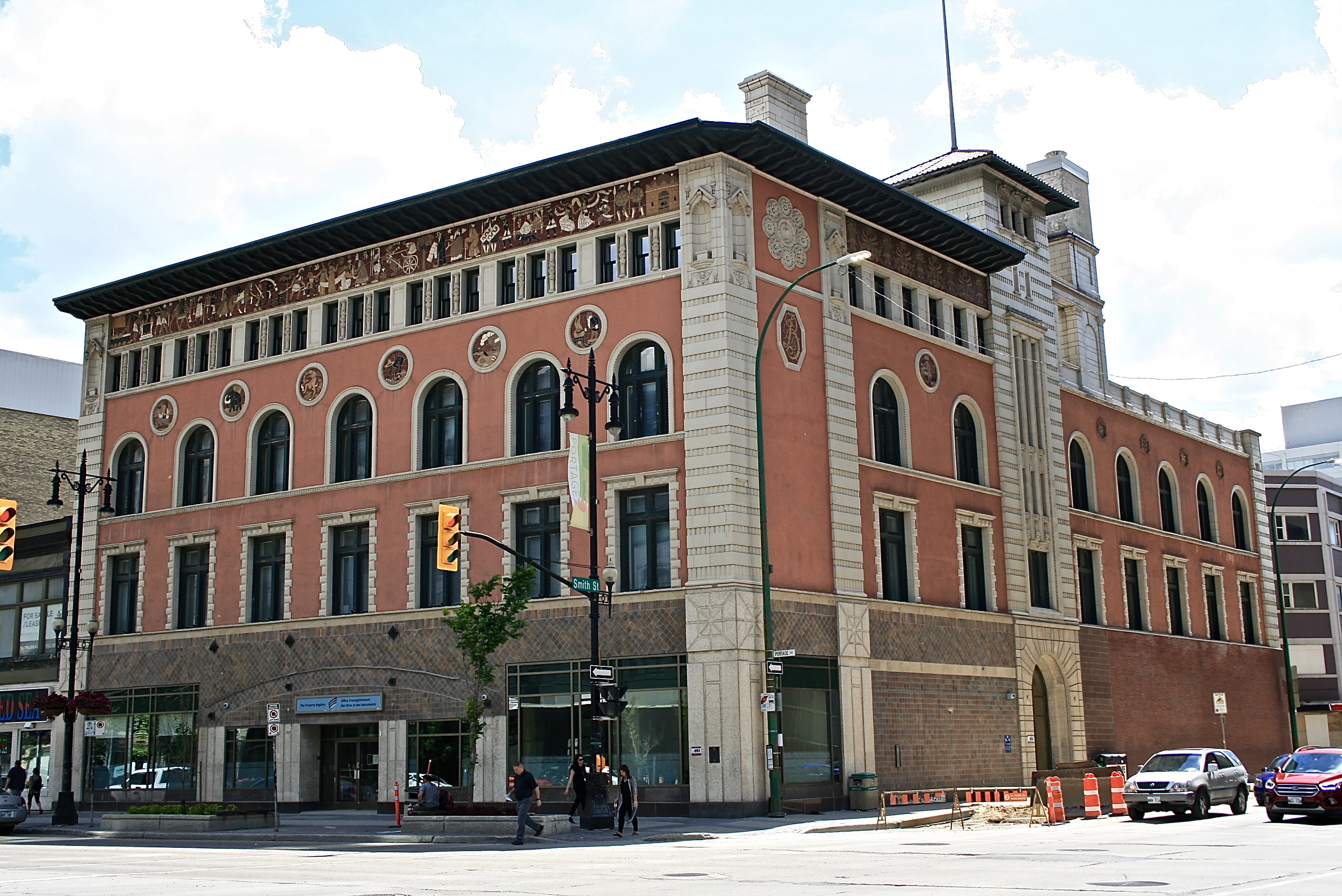 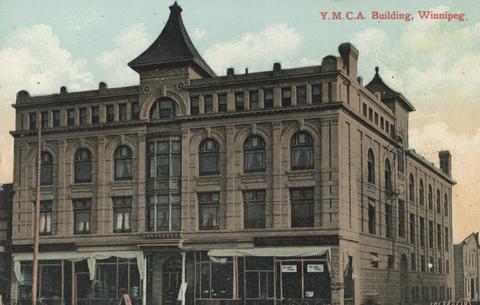 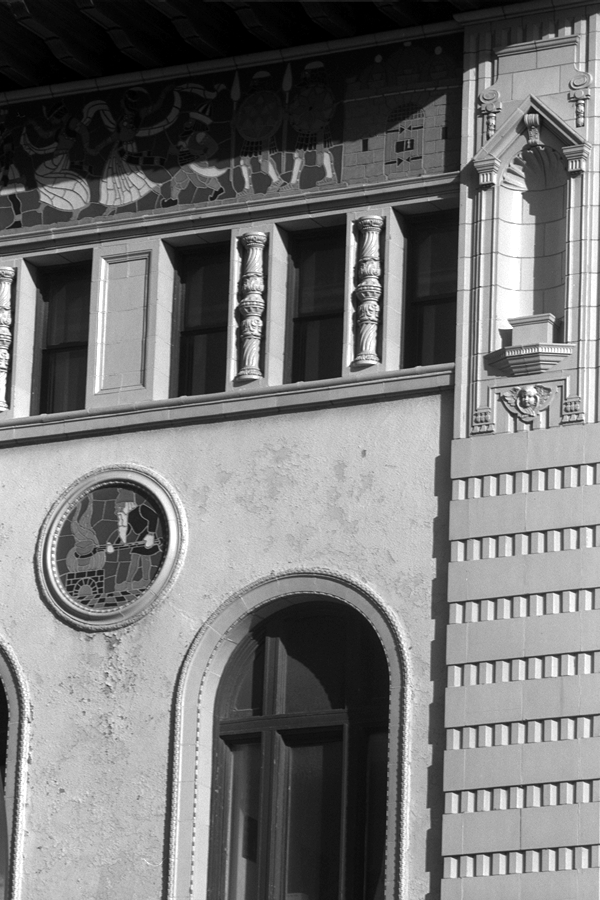 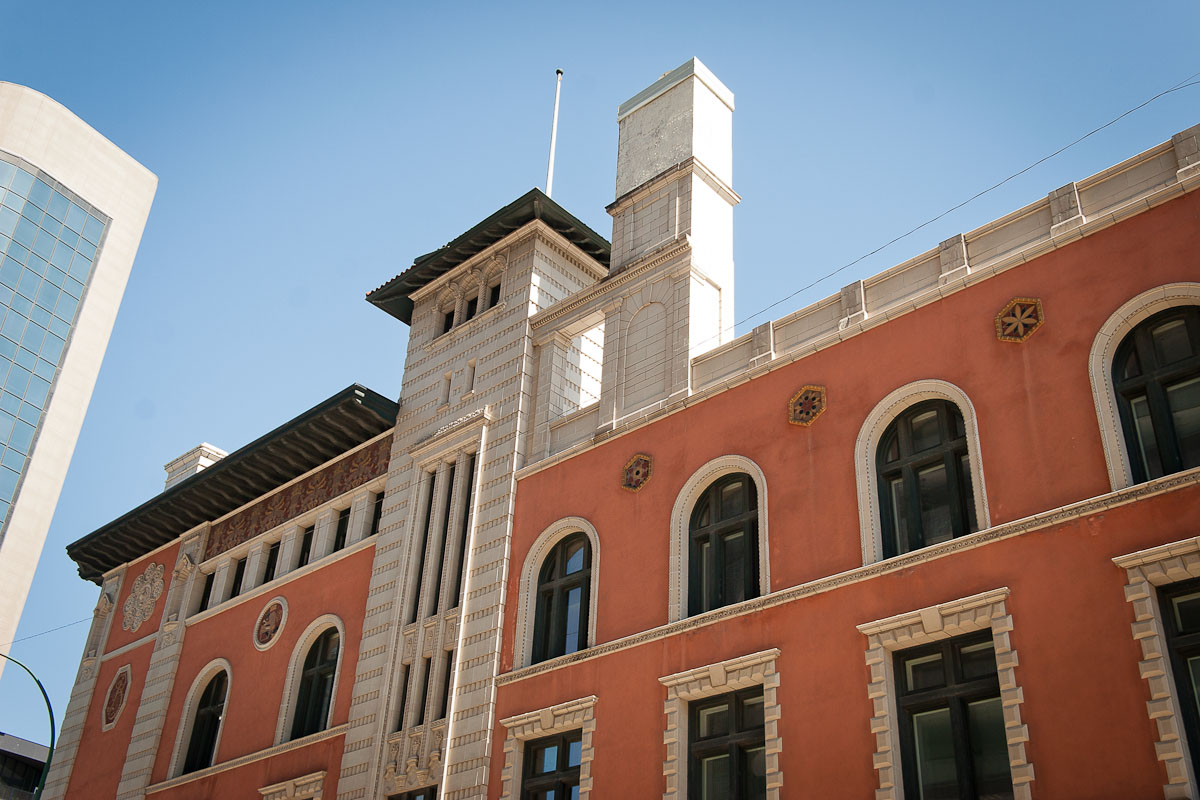 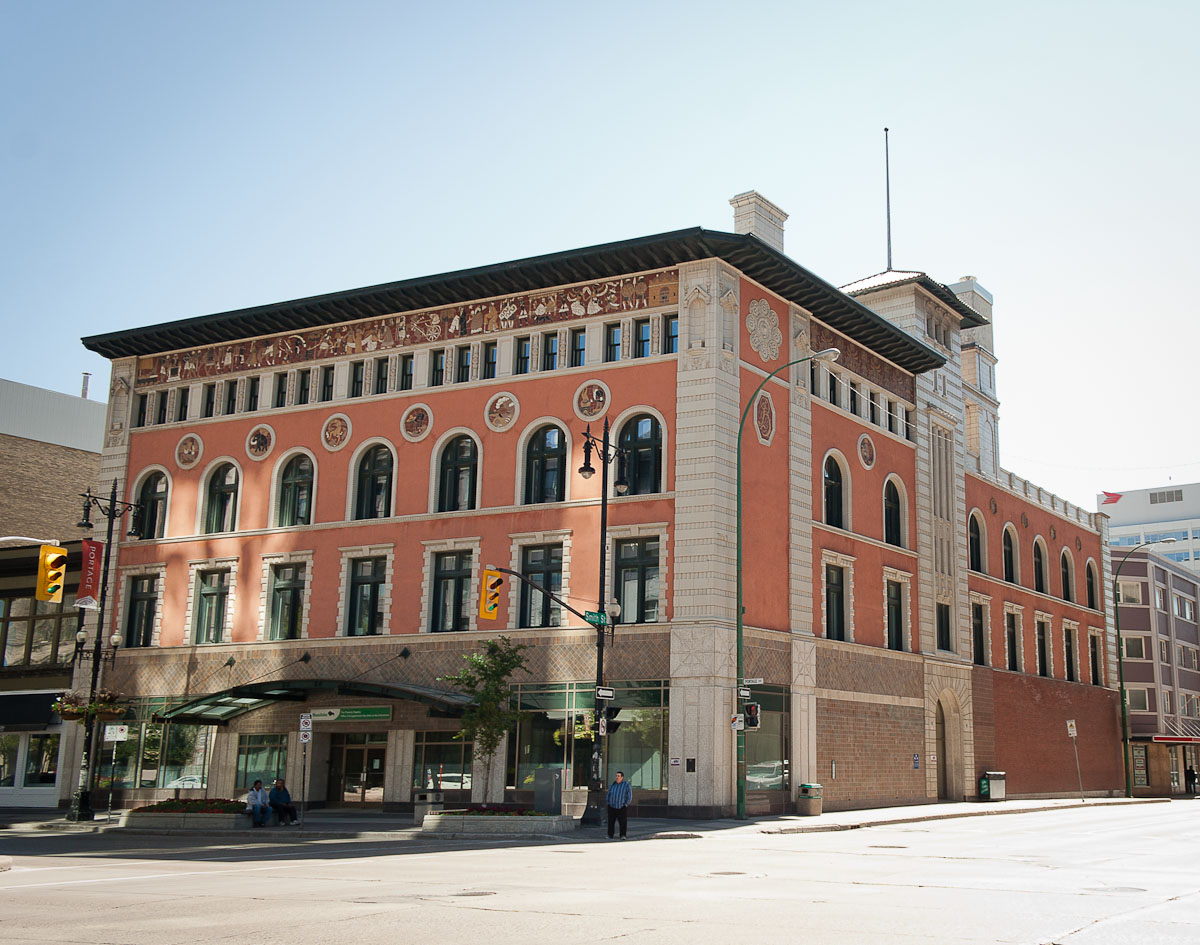 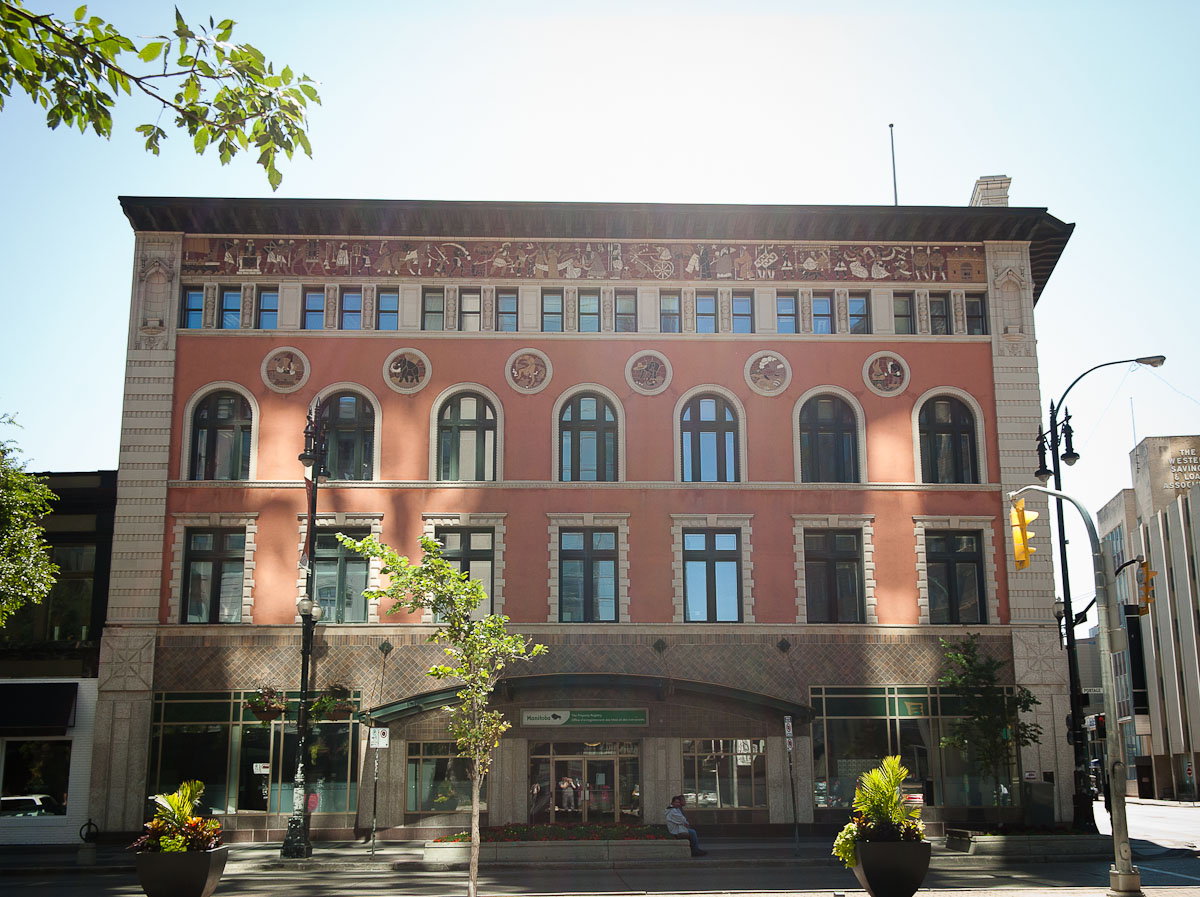 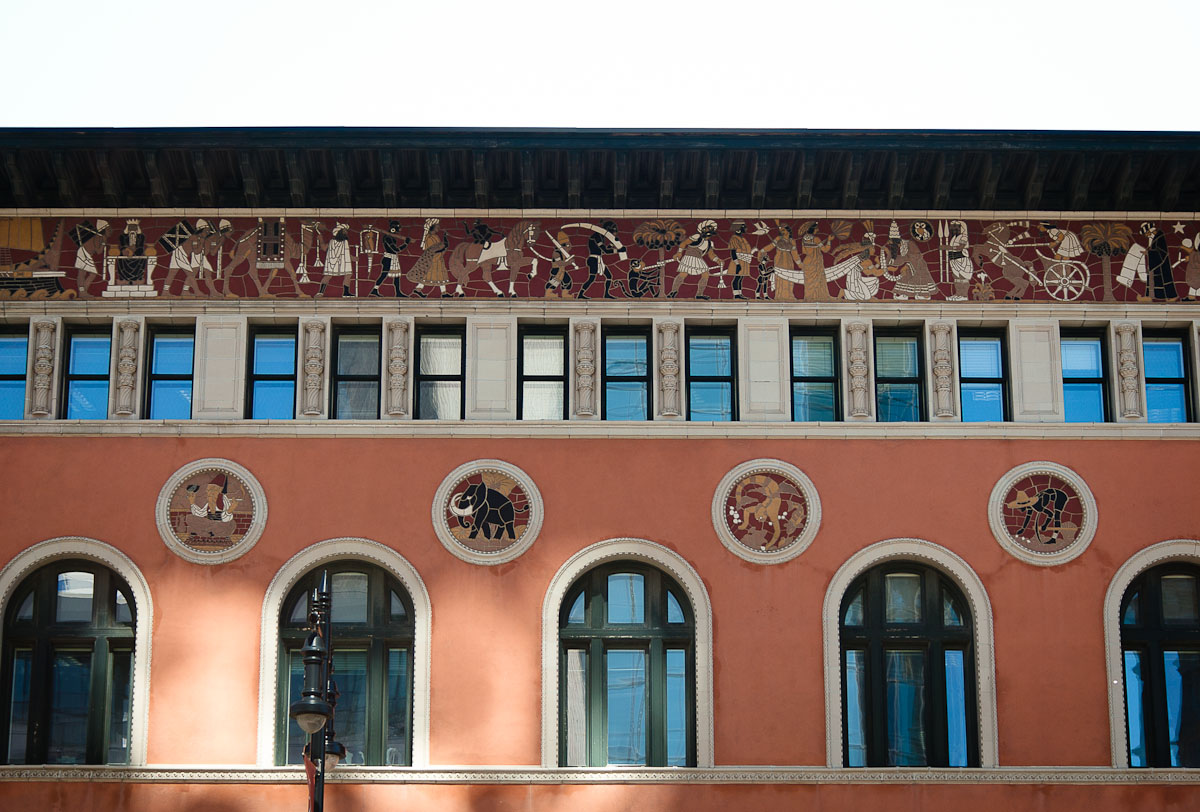 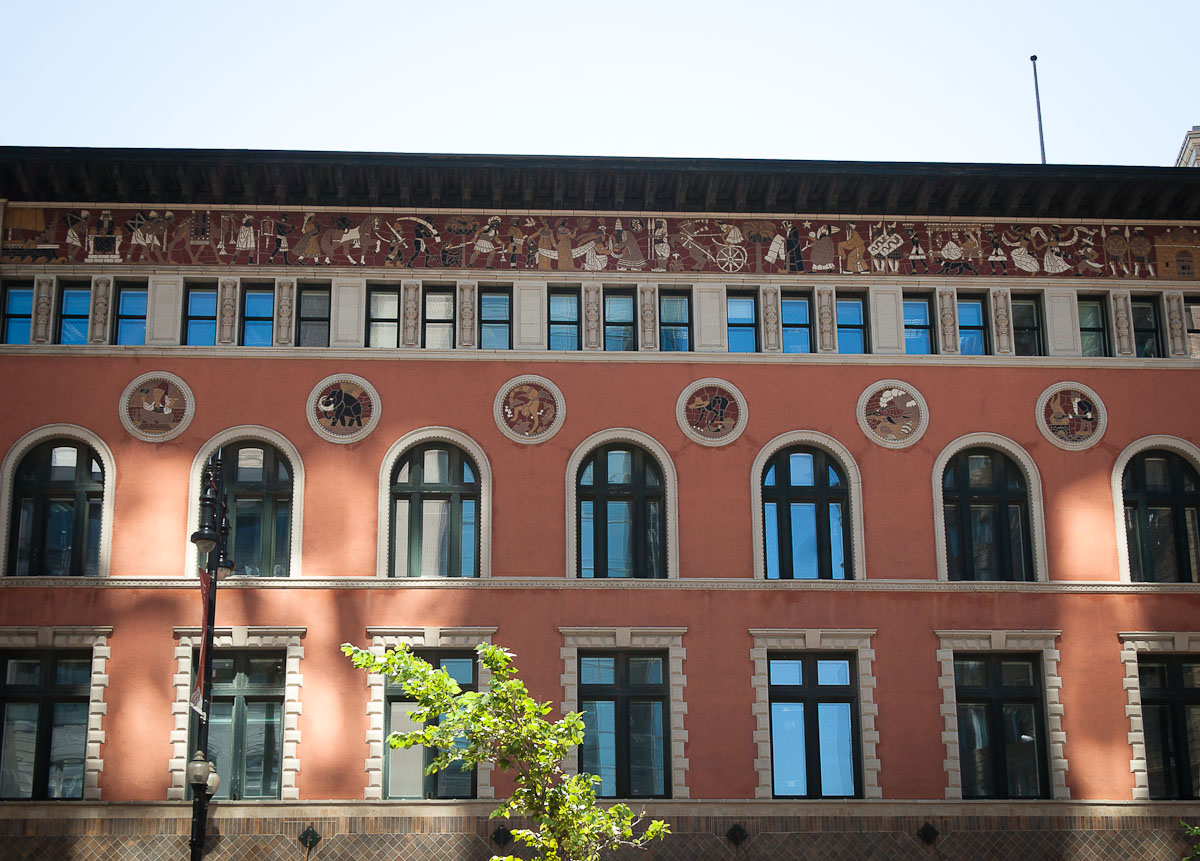 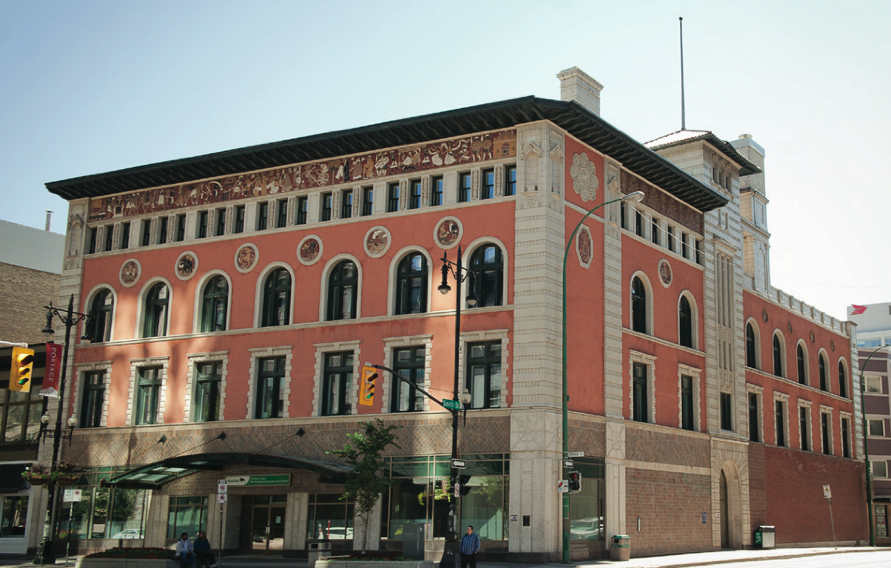 The original architect was George Browne. Hired by the YMCA to design a new facility after many years of fundraising. The YMCA purchased the lot in 1890 with the intent on developing a new building despite their low funds. Fundraising took a long time as the building wouldn’t be constructed until 1901. Contractors J. A. Garvin and P. Burnett finished the building for $68,500 and another $20,000 was spent to furnish it.

Browne’s exterior design was rooted in a Romanesque style. It had subdued ornamentation, rustic stone, round-headed arches, and a Portage Avenue tower. However, all of these elements were eliminated when Percy Nobbs redesigned the buildings exterior for Birks Jewellery. Nobb’s work favoured an Italianate design. The building was faced in granite and Tyndall stone with terra cotta for the quoins, window frames, and niches. The intricate medallions and frieze (Decorative horizontal band) that appear to be mosaic were actually done in terra cotta as well. The medallions depict the source of materials for jewellers; an elephant for ivory, an ocean for sea turtles, mother-of-pearl, and coral, and a man searching for diamonds. In total there are seven medallions, six facing Portage Avenue and a seventh facing Smith Street. The Frieze shows the visit of the Queen of Sheba to King Solomon. Overall, the building is a product that shows the successful efforts of two famous Montreal architects.

The original interior designed by Browne was meant to meet the needs of the YMCA. Browne designed the building with a swimming pool, fed by an artisanal well, a 600-seat auditorium, a 150-seat lecture hall, a library, a gymnasium, two bowling alleys, and furnished dormitories on the upper level. The main Portage Avenue entrance opened up to a wide oak stair was that led to a rotunda which was lit by the natural lighting from windows and a fireplace. The bay windows opened up on to portage began on the second level and continued up to the fourth which rounded into an arch. The fourth floor windows were otherwise quite small when compared to the windows on the third and second floors. The third and fourth storey were separated by a decorative cornice with a final cornice which completes the fourth storey. The Portage Avenue tower was centred atop the fourth floor while the Smith Street tower, which still remains, sits atop of the third storey.

In 1909 the building was sold to Birks Jewellery who had John D. Atchison redesign the interior for an ideal retail store in 1910. The first floor was converted into a large showroom and offices on the upper levels. Atchison is also credited with removed the bronze on the building’s exterior. The fourth floor dormitories were left untouched and most of the furniture remained until 1991. Birks Jewellers had more work done on the building in 1914 with Nobbs who also added a mezzanine as well as the extensive exterior work. Another alteration to the building occurred in 1951 when the show window was added and lined in bronze. This alteration also included lining the vestibule with travertine marble. A few more minor alterations occurred in the late 1960s and again in the mid 1970s.

Birks Jewellery left the premise in 1987. The building is currently used to house the offices for Winnipeg Land Titles.