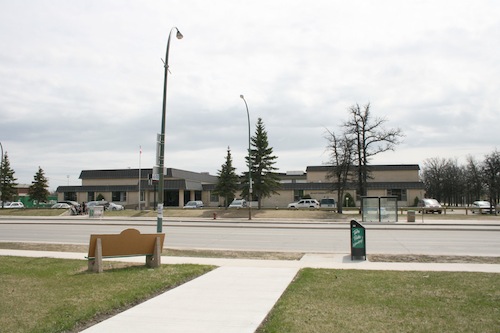 Shaftsbury High School is a smaller-sized school that stands one and two storeys and was mainly built all at once, presenting a unified whole that enhances the design. It is formed from a series of volumes according to spatial function, which weaves the walls in and out but it is pulled together through a shallow mansard roof (a roof that has four sloping sides, each of which becomes steeper halfway down), and the use of limestone facing on the walls throughout.

Special attention was brought to the entrance block facing Grant Avenue, which drops between flanking wings and is particularly welcoming behind a circular driveway and several large oaks. An academic wing and art room were added on the southwest corner in 1976 and blend well with the original building.

The layout radiates from a large theatre in the centre with a gym block on the east and science labs and the band room on the west. The lower centre block holds offices, and industrial arts rooms are on the northeast corner.