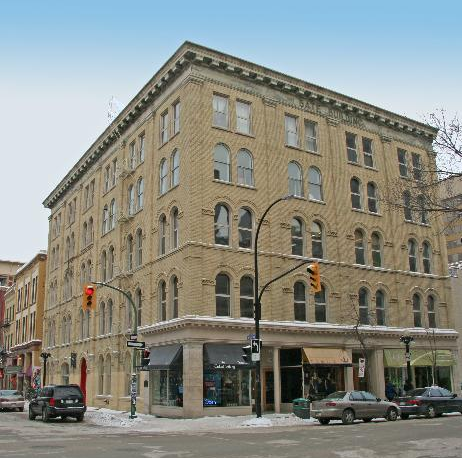 Standing five storeys tall at an important intersection in Winnipeg's Exchange District, a national historic site of Canada, the Bate Building is one of the district's oldest structures, completed in 1883. The City of Winnipeg's designation applies to the building on its footprint and public areas inside.

The Bate Building was one of the first substantial brick warehouses that came to define Winnipeg's Exchange District, a dense collection of warehouses that was the basis for wholesale trade in Western Canada from about 1885 to 1920. Before 1885, the district was more typically composed of smaller brick buildings that contained manufacturing and small warehouse operations. After that date, buildings like the Bate Building (originally called the Lyon Block) came to predominate, many designed with reference to the Romanesque Revival style, an architecture whose muscular form and detailing made it suitable for massive brick buildings. The Bate Building is a good example of the style, and boasts high levels of architectural integrity inside and out. In its functional evolution from warehouse to offices, and in the two-storey addition made in 1905, the building also recalls the changing economic face of the district, as the demand for premium downtown commercial space spread beyond the traditional Main Street business centre. The Bate Building is also an important element in maintaining the historical continuity of the streetscape at the McDermot Avenue-Albert Street intersection.