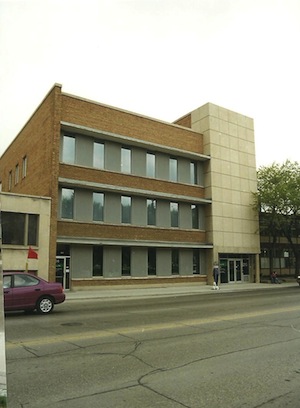 Medicare was initiated incrementally accross the country and Manitoba's entry into the federal grants-in-aid program put Manitoba Medical Service out of action in 1961, and this building was sold to private interests.

Renamed the Legal and Accountancy Building, it was leased to a variety of professional offices including two large law firms, Portage La Prairie Mutual Insurance Company, a PR firm and an engineering consultant. Since 1975, it has housed a variety of Manitoba Government Agencies, first in Consumer and Corporate Affairs (now in the Woodsworth building) and then various departments in Health. A provincial co-op daycare has operated in this building on the ground floor since 1985.

The architects of 210 Osborne Street North are Northwood and Chivers, the builder was Malcolm Construction. The original structure was a modern, yet conservative design that stressed economy, flexibility and efficiency, evident in its open floor plan and use of natural light.

The building's plan was illustrated in a pamphlet distributed at the opening ceremonies (11 May 1953, by the Lieutenant Governor of Manitoba, the Hon. R.F. McWilliams). All public service and claims areas were on the main floor with easy access to the records behind. The second floor contained the executive offices and boardroom, the typing pool and cafeteria. Vaults, claims processing and the supervising nurse were housed on the third floor, accessed by both elevator and dumb-waiter. Both the mechanical and the elevator housing are situated on the roof, concealed in part by the extension of the parapet and the extended limestone clad mass on the northwest that contains circulation space.

The original windows were divided into many rectangular lights by transoms and mullions, to support and highlight the horizontal character of the building. While the canopy for each layer of windows remains, the replacement windows no longer exhibit this strong horizontal quality. The original marble cladding, which ran along the base of the building, has been replaced by brick.

The transformation to a multi-tenanted business office occurred in 1961 when architect Charles Faurer reworked the interior and some of the above mentioned exterior elements. A light well down the second floor was added and a storeroom constructed in the penthouse mechanical space. A door, on the south-east corner of the building, was also added at this time. In 1977 the building was updated to meet changes in code and was altered for use by the Provincial Department of Public Works.