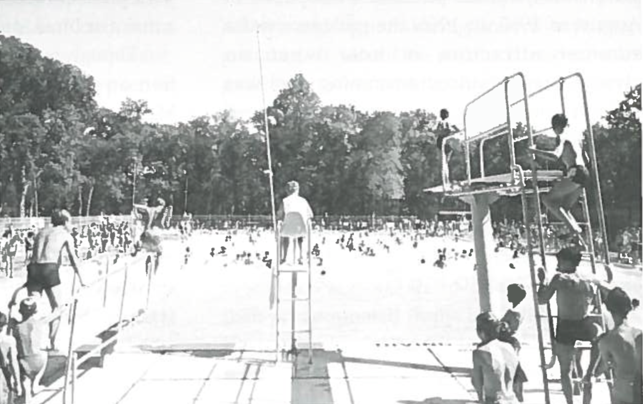 This Olympic-sized outdoor swimming pool and accompanying facilities were built at a cost of $360,000. The pool itself measures 50 metres by 23 metres, and is graduated from three feet six inches to 12 feel six inches deep. It takes 174,000 litres of water to fill the pool. Over 25,000 square feet of deck area was planned to provide "ample room for sun bathers," in the words of period descriptions.

A changing facilities building stands between the pool and McKay Drive.The building provides washrooms, men's and women's change facilities, lockers, a staff and control area, and a filtration plant. A refreshment booth was designed to serve customers outside the pool area, as well as inside.

The architectural design of the Kildonan Park Pool structure uses a modernist approach. The building appears as a low-lying form, somewhat hidden by the park's extensive foliage. A portico defines the main, one-storey entry elevation, semi-enclosed by a row of unpainted concrete columns that support a lengthy glue-laminated wood beam. Brown brick clads the remainder of the building, which is topped by an exaggerated broad and thick roof plane, reminiscent of the nearby Peguis (Kildonan Park) Pavilion, which was likewise designed by Number Ten Architectural Group.

Gene Telpner, long-time Winnipeg Free Press columnist called this one of the most beautiful pools he had ever seen, adding, "the setting for it in the park is magnificent."

At the time of the pool's construction, there was only one enclosed pool, Sherbrook Pool in the city's West End, in the province. Vaughan Baird was master of ceremonies for the pool's dedication on July 20, 1966, calling it a "credit to the community." Early on, an average of more than 60,000 swimmers visited the pool each summer during its season, from mid-July until after the Labour Day long weekend.