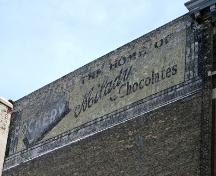 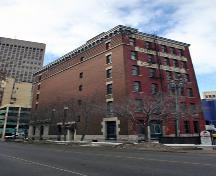 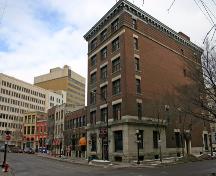 The Galpern (Porter) Building, a six-storey steel, brick and stone structure built in 1906, stands at the east end of a group of historic warehouses on McDermot Avenue in Winnipeg's Exchange District. The City of Winnipeg designation applies to the building on its footprint.

The Galpern (Porter) Building, a handsome Chicago School warehouse with modest classical detailing, is a major component of a continuous row of brick buildings from the 1881-1921 period in downtown Winnipeg. The structure, designed by J.H.G. Russell, also is an important example of the aesthetic transition that occurred in the city's warehouse district in the early 1900s from Romanesque-influenced styles to a more restrained commercial architecture. Built for James Porter and Co., a crockery and china wholesaler, this functional facility, with its showroom, office, storage and service areas, has adapted well to subsequent uses, including as the L. Galpern Candy Co.'s factory. Through its tall profile, rich materials and classical composition, the building forms a striking visual anchor at one corner of a significant streetscape in the Exchange District National Historic Site.

Left vacant and deteriorating for a decade, it was acquired by Alston Properties Ltd. and carefully retrofitted as a residential conversion under the leadership of Bryce Alston.

The interior was divided into more than thirty apartments and four townhouses with a rooftop deck, and was fully occupied by new residents in 2018.