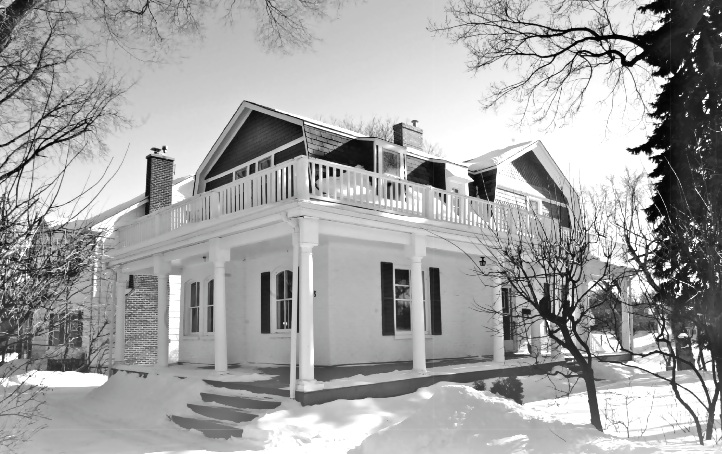 Neighbouring the Assiniboine River and Omand’s Creek, 1338 Wolseley Avenue is also known as Pioneer Lodge. City records indicate this impressive two storey home was built in 1894. The building was the first house built in the area. Among its architectural features are two pillars marking the beginning of a winding driveway, which bear the home’s original name, an expansive porch, and an (interior) cast iron fireplace.

The home’s first owner was Fredrick Salter. Salter was a noted and skilled gardener, who purchased the two lots east of the creek and planted vegetable and flower plots and many trees, with a total of 26 greenhouses and a large water tank. He also grew hay and oats on land north of Portage Avenue. Salter’s market garden supplied the Canadian Pacific Railway trains from Montreal to Vancouver. He owned both the inner and outer two miles bounded on the west by Omand’s Creek. In 1885, he sold part of his property to the railway for $104. Then, in 1893, Salter transferred and sold pieces of his land to several people including his son, Thomas F. Salter, and a part to the “Great Highway” (Portage Avenue). Due to ill health, Salter then moved to California where he died around 1910 at the age of 73.

Up until 1910, before the land was subdivided, it was said that “great maples guarded a driveway down to the entrance on Portage Avenue”. About this time the house was enlarged and the verandas attached.