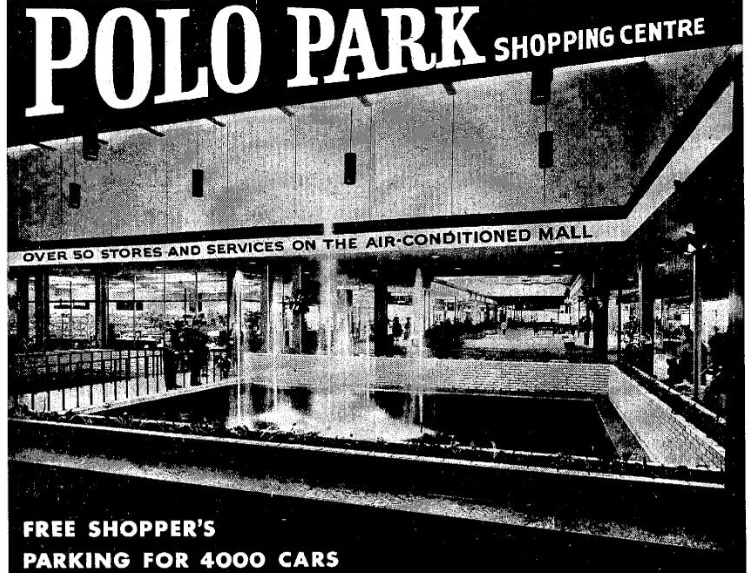 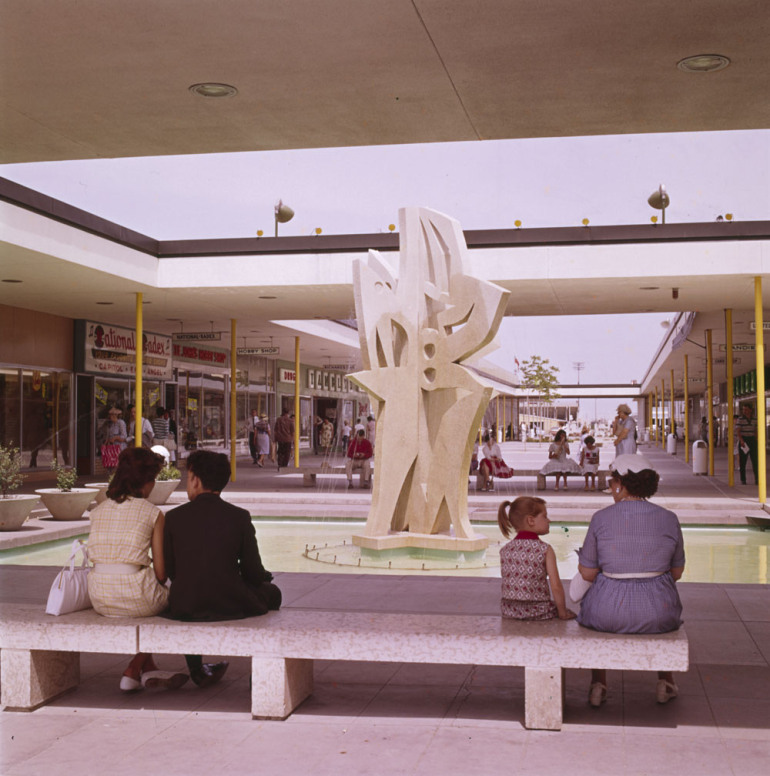 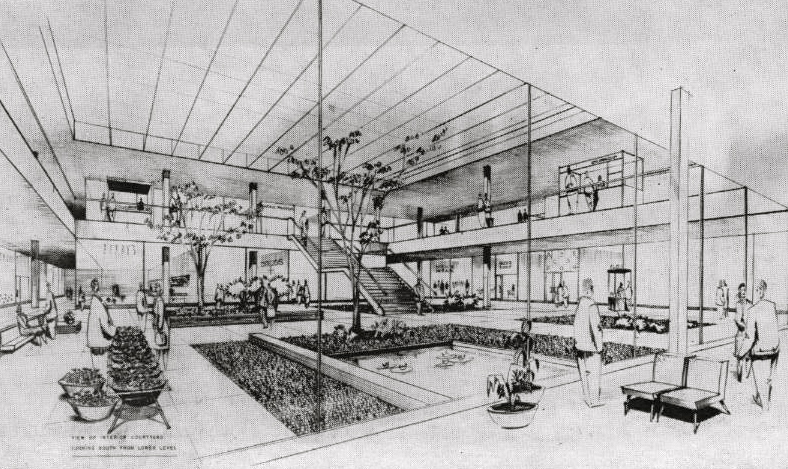 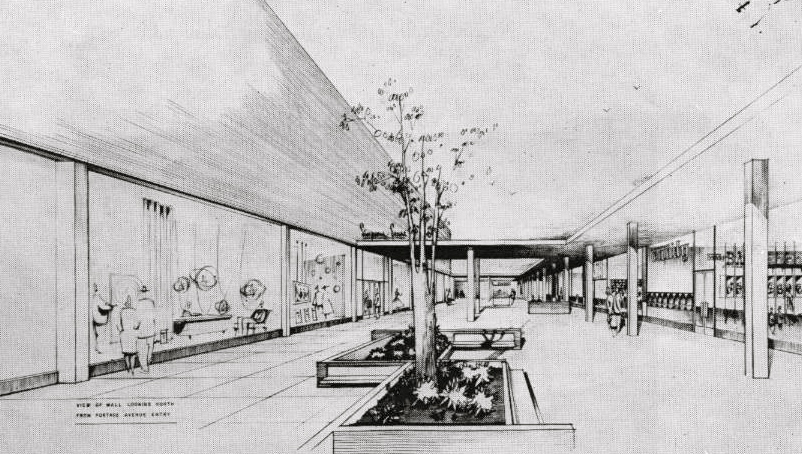 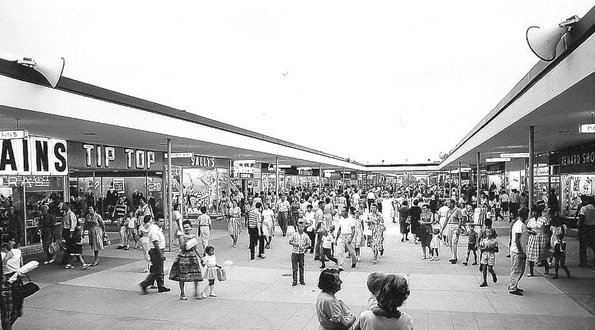 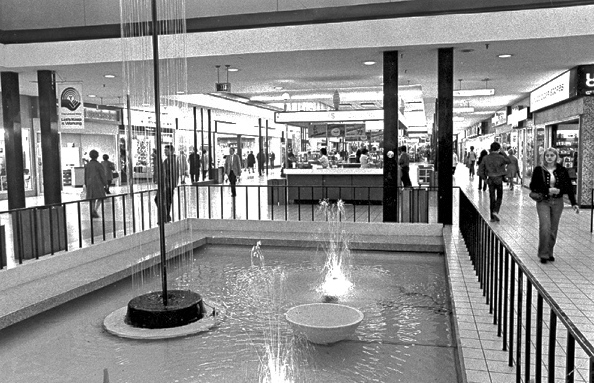 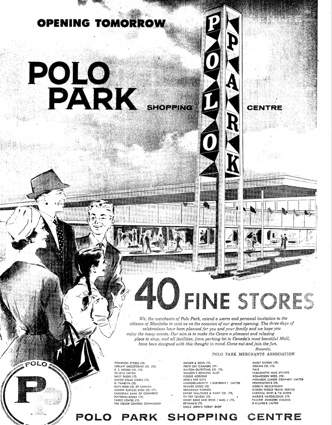 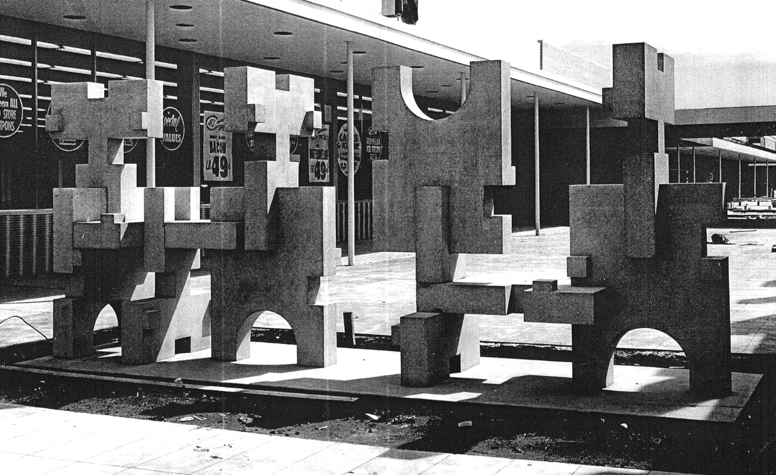 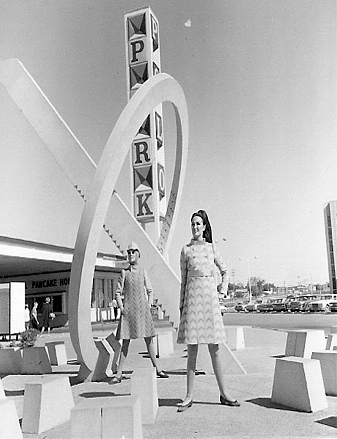 Polo Park, which opened on August 20, 1959, was a strikingly modern addition to the city’s retail landscape. Two thousand people attended the project's ribbon-cutting ceremony, which was conducted by Manitoba Premier Duff Roblin and Winnipeg Mayor Stephen Juba. The project’s original design featured a number of separate structures centred upon two parallel long lines of connected stores and other facilities, with Simpson-Sears department store an anchor tenant at the south end. Retail spaces were fronted on the interior court space by flat-roofed overhangs held aloft by slender pilotis-style metal columns. This modernist approach was typical of the work of Green Blankstein Russell and Associates, the firm responsible for the design of the shopping mall. It communicated the fresh approach the project represented in Winnipeg’s retail context.

At the same time, the project was marketed as reminiscent of classic forms of shopping, the mall said to be a “return to the age-old tradition of a village market but with twentieth century comforts." The 1959 structure was erected on the site of the former Polo Park Race Track, a 1920s facility with a grandstand that could hold 4,500 spectators.

In 1963 Polo Park became one of the nation's first covered shopping centres and the first to go from unenclosed to enclosed. At this time the interior fitments were altered, with concrete flooring replaced by terrazzo. By 1977 the facility housed 55 acres of retail and associated spaces, including 79 shops and two department stores, as well as offices, a bank, movie theatre, and bowling alley. Further renovations dramatically altered the building’s shape and aesthetics in 1986, when the mall received a second storey over top of its entire footprint. Renovations came again in 2007 and 2014.

Polo Park fits within a distinct genealogy and type of modern building. The modern North American shopping centre possesses antecedents in such ancient structures as Roman markets, Mediterranean and Middle Eastern bazaars, and nineteenth and early-twentieth century arcades. A notable early example of the North American shopping mall is Los Angeles’s 1936 Crossroads of the World, by architect Robert V. Derrah. Unenclosed suburban shopping malls appeared in North America in increasing numbers during the 1950s. Canada’s first such structure, Norgate Shopping Centre, opened in Saint-Laurent, Québec in 1949, making Polo Park among the first such projects in the country. Polo Park's 1963 enclosure again was a pioneering effort, coming only seven to eight years after covered suburban shopping malls were first built in the American Midwest, developed by such architects as the Viennese Victor Gruen. The first covered shopping mall in Canada arrived only three years earlier, with London, Ontario’s Wellington Square.

One of the more surprising elements of Polo Park's design was the copious presence of art at the time the project opened. Following research conducted at other such developments across North America, the architects Green Blankstein Russell and Associates were inspired to commission four Winnipeg artists to fill the new building with sculpture and other art pieces. This decision mirrored the extensive use of art in the work of pioneering Austrian-American mall designer Victor Gruen. These included Acrobats, a playful concrete sculpture by Viennese-born Winnipeg School of Art professor George Swinton which first stood in the centre of the mall’s main pool. The work is now installed at a nearly hidden location at Kennedy Street at Webb Place. Swinton also executed an intricate abstract mosaic that spanned 45 metres across the south facade of the mall’s Simpson-Sears outlet. This composition of various blue tones enlivened the monochromatic colour scheme of the building as a whole. The mosaic was demolished in a 2003 renovation.

Polo Park’s original slate of public art also included a bronze reclining figure, Bronze Lady, by Duane Eicholz, also of the Winnipeg School of Art. Eicholz, in partnership with local artist Jim Willer, contributed a large-scale sculptural sundial which graced the mall’s Portage Avenue entrance plaza, to the east of Swinton’s Simpson-Sears mosaic. Willer also created two intricate relief sculptures for the mall. Made of cement segments held aloft by metal wire, one work was located on the mall’s east side and depicted two roosters crowing at the rising sun. On the west side of the complex an owl paid heed to the prairie sunset. These works were removed and demolished over the course of the mall’s history.