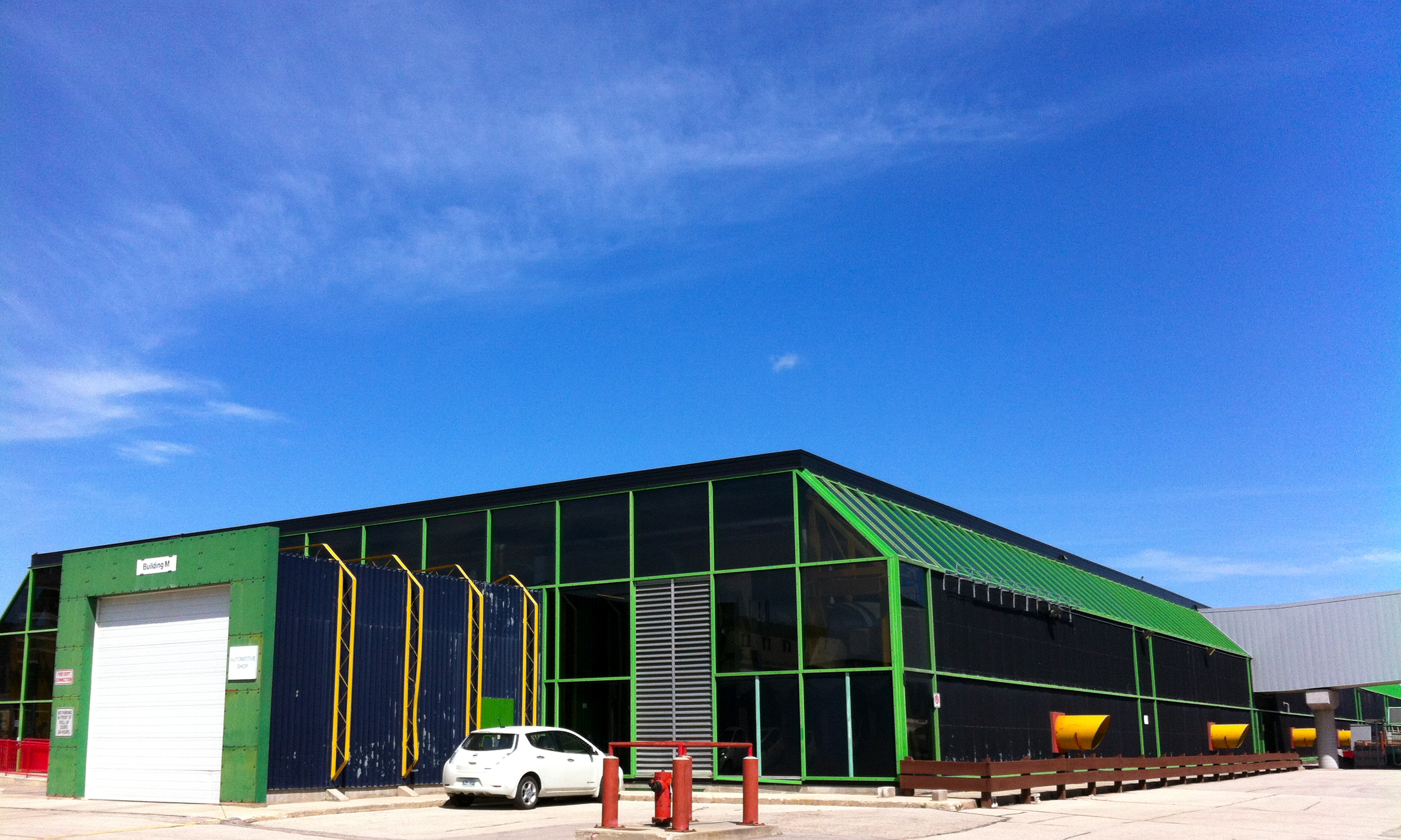 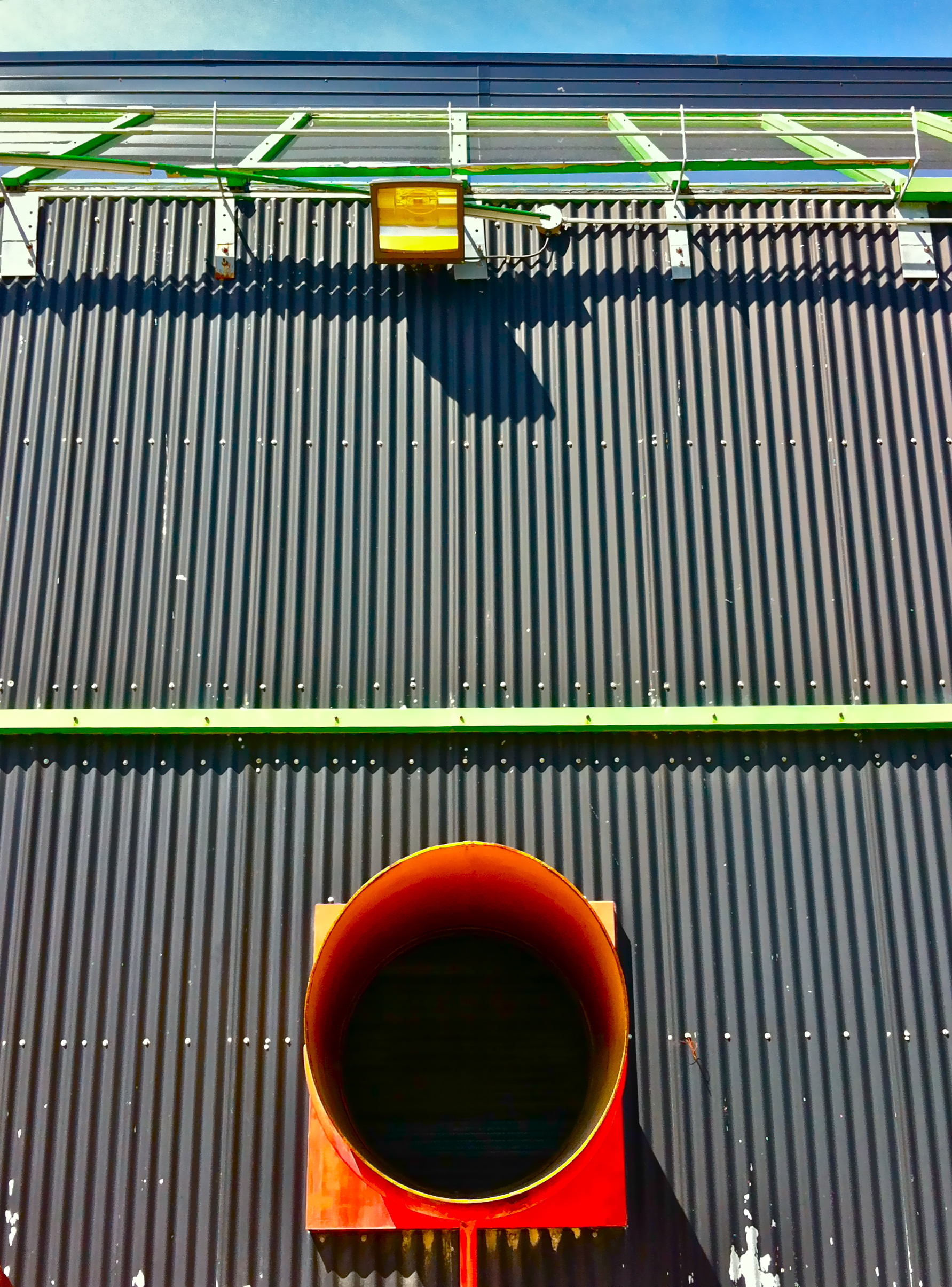 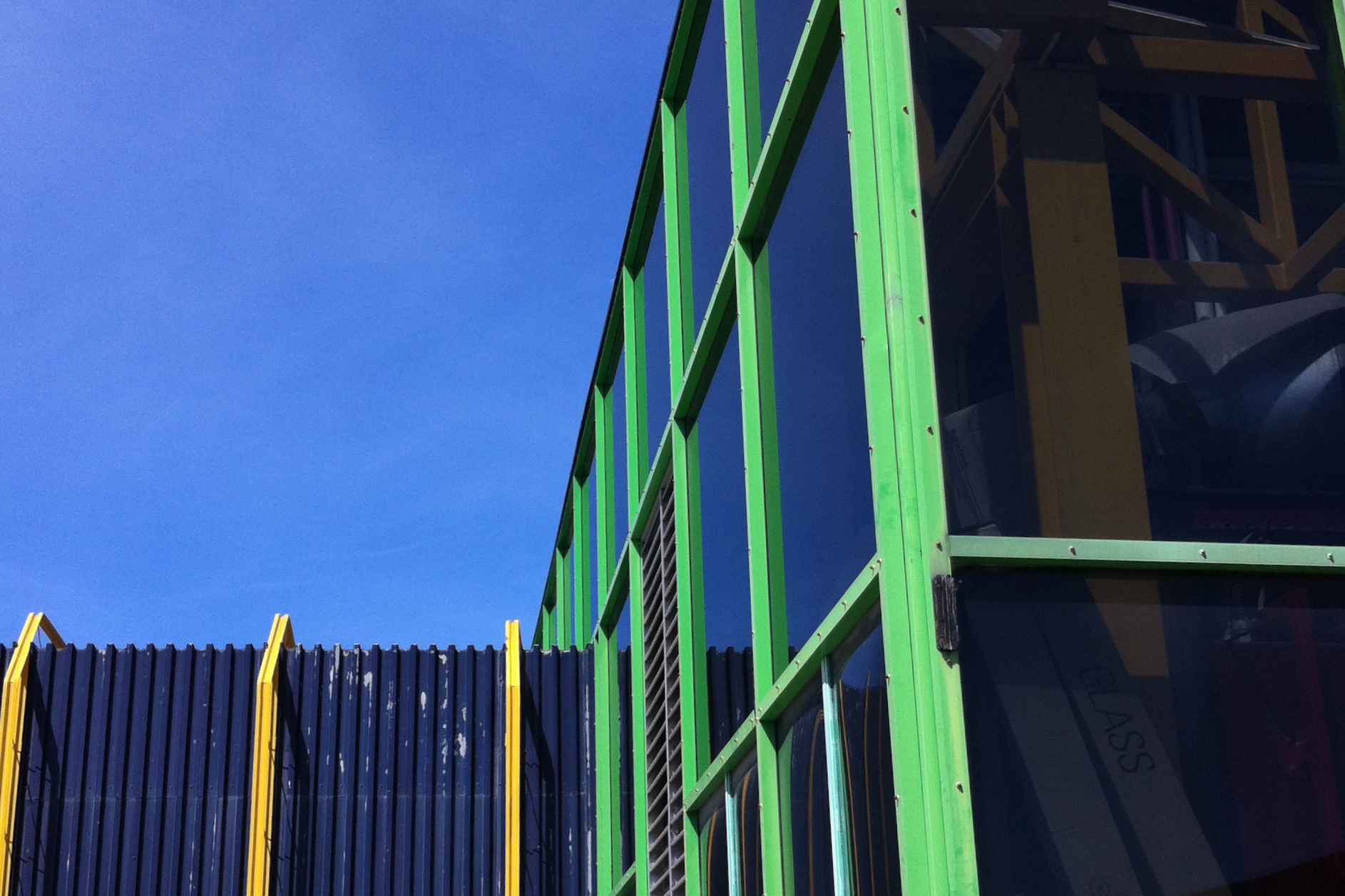 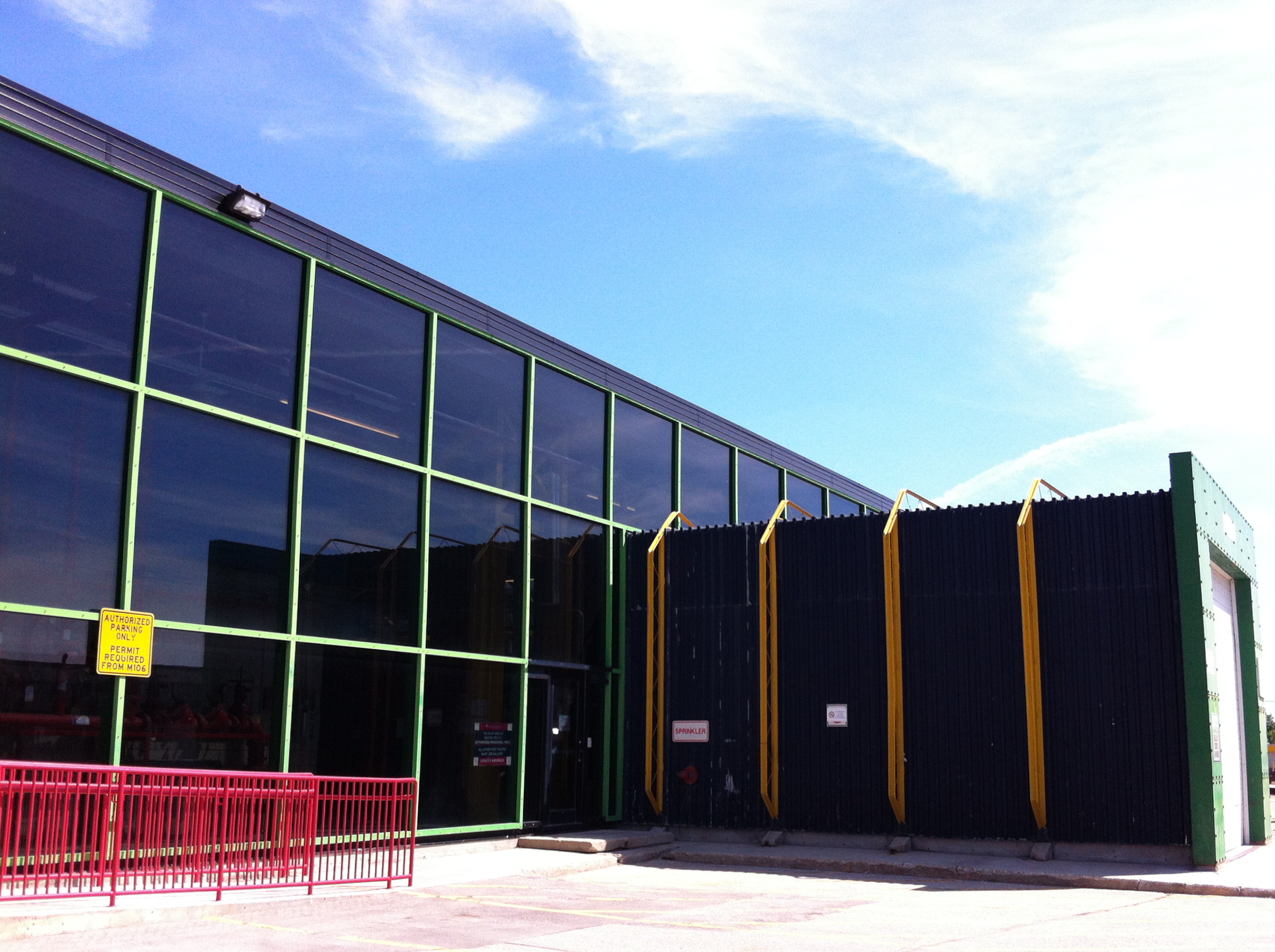 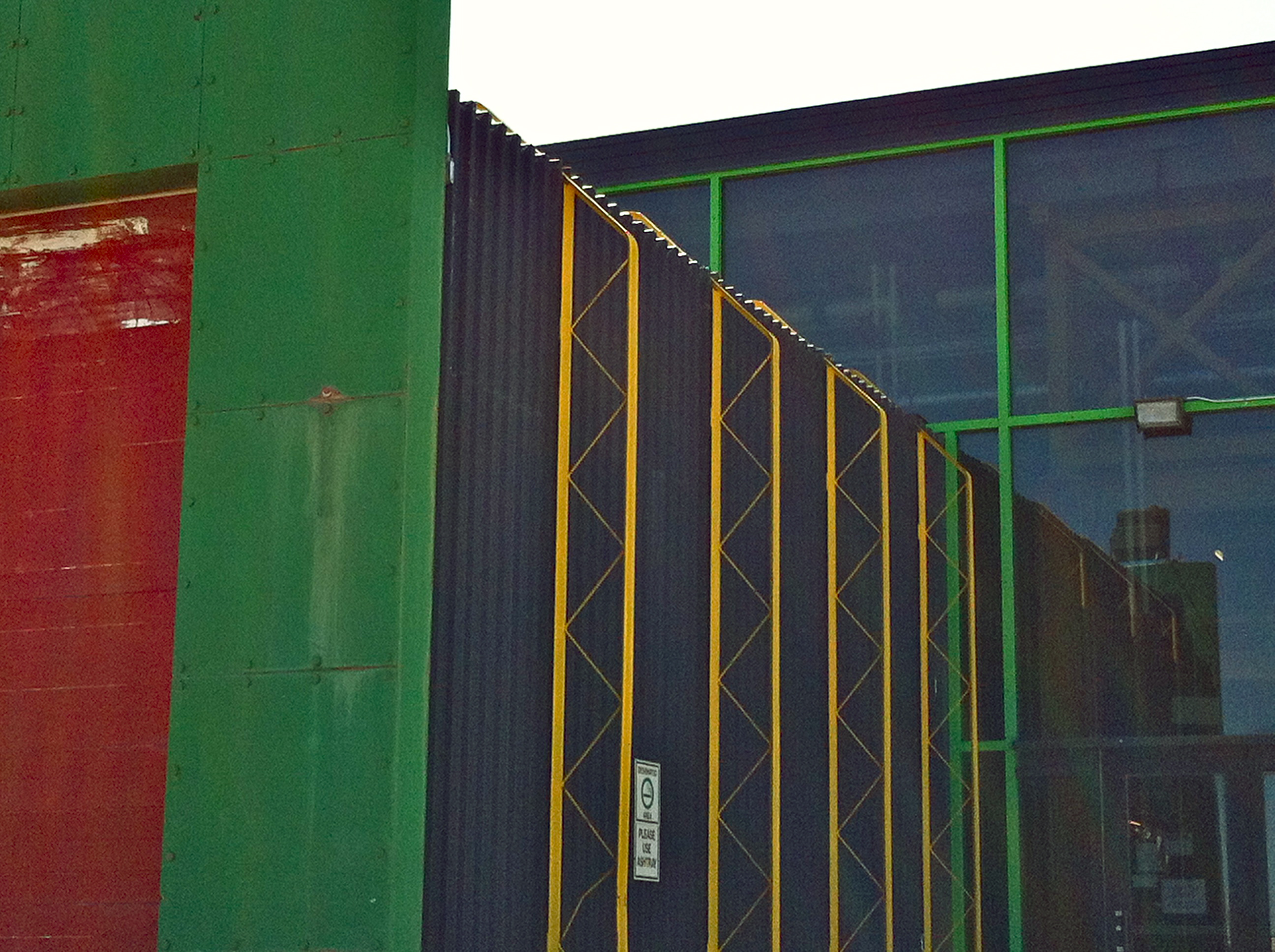 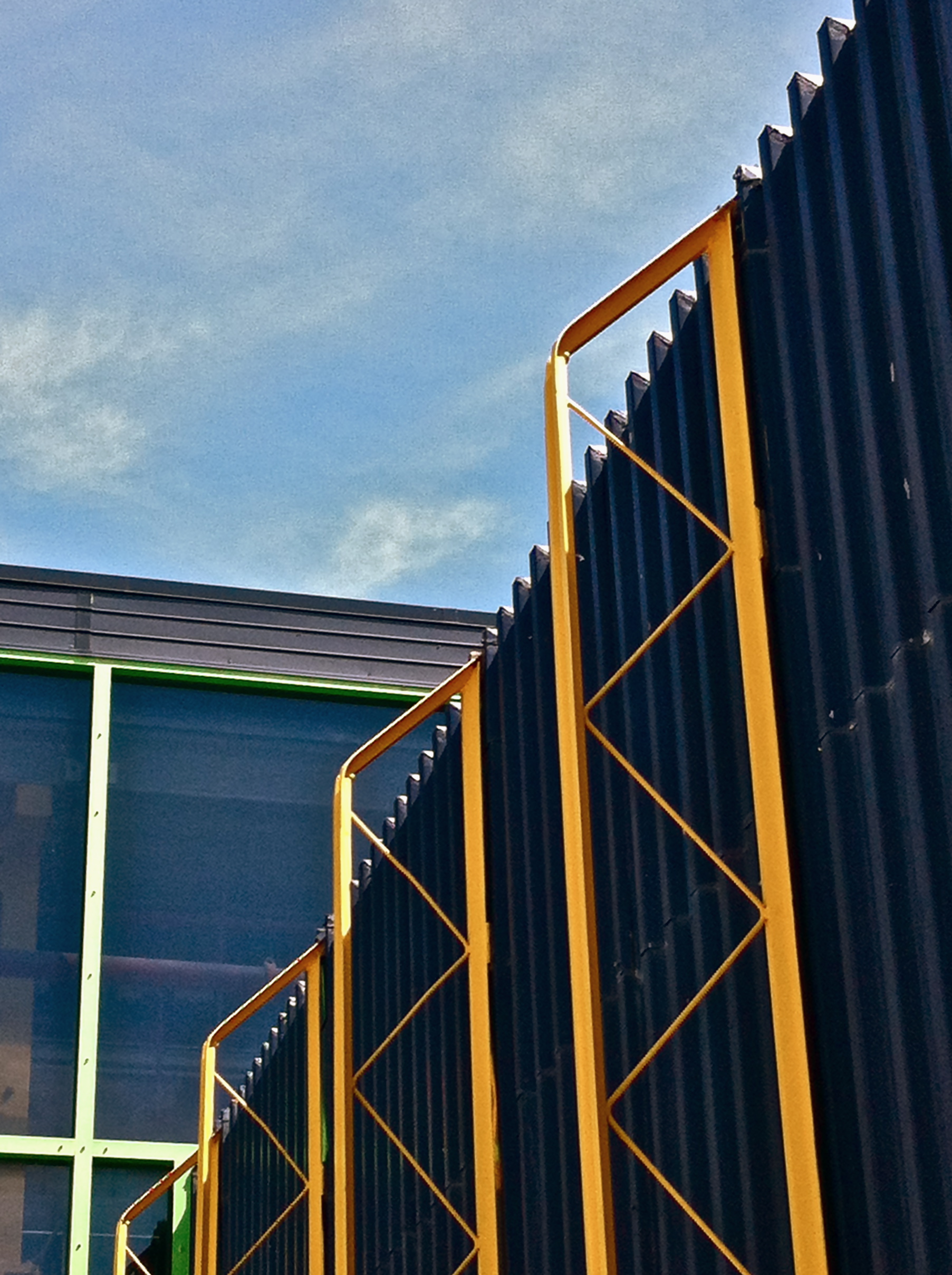 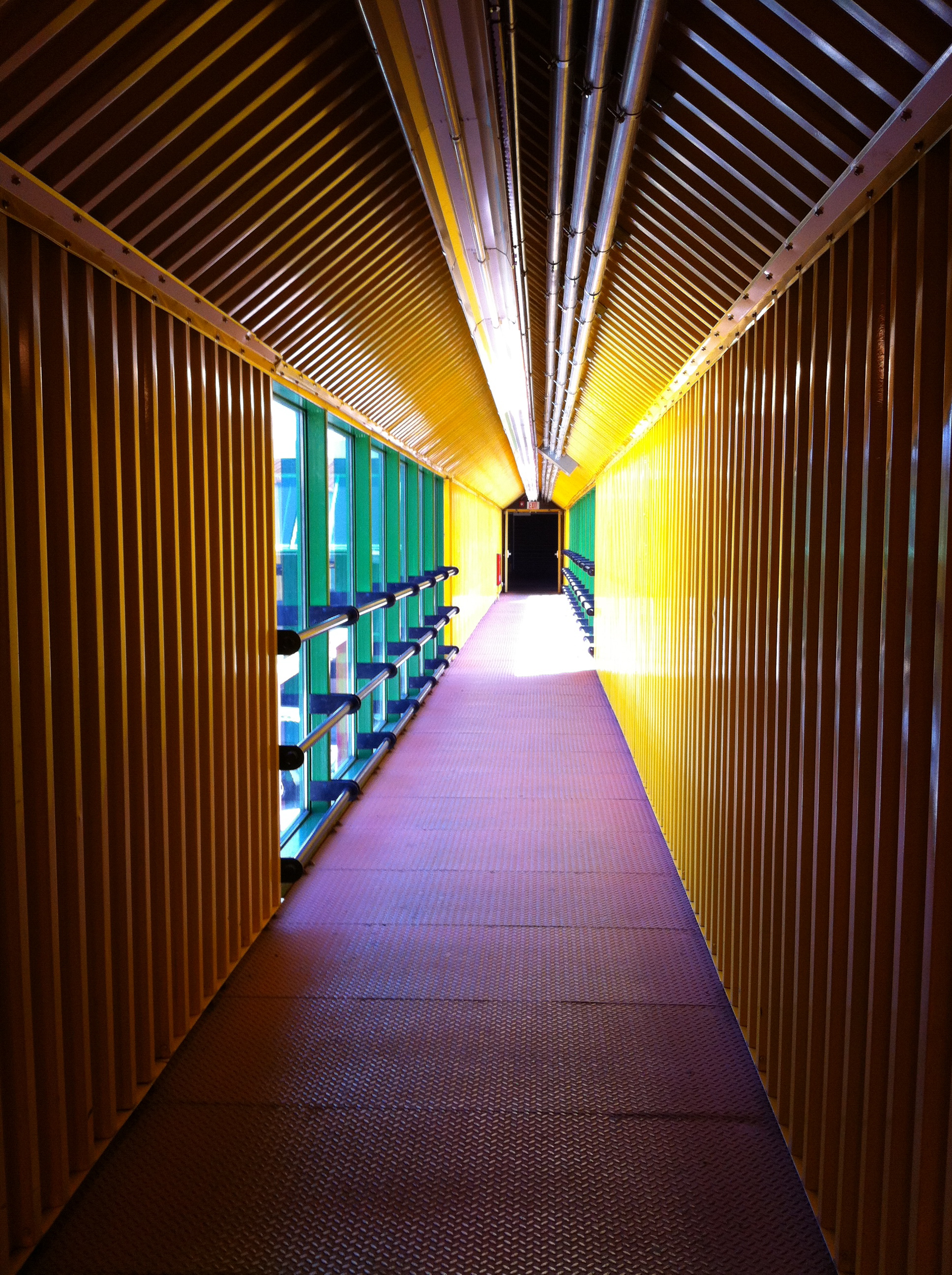 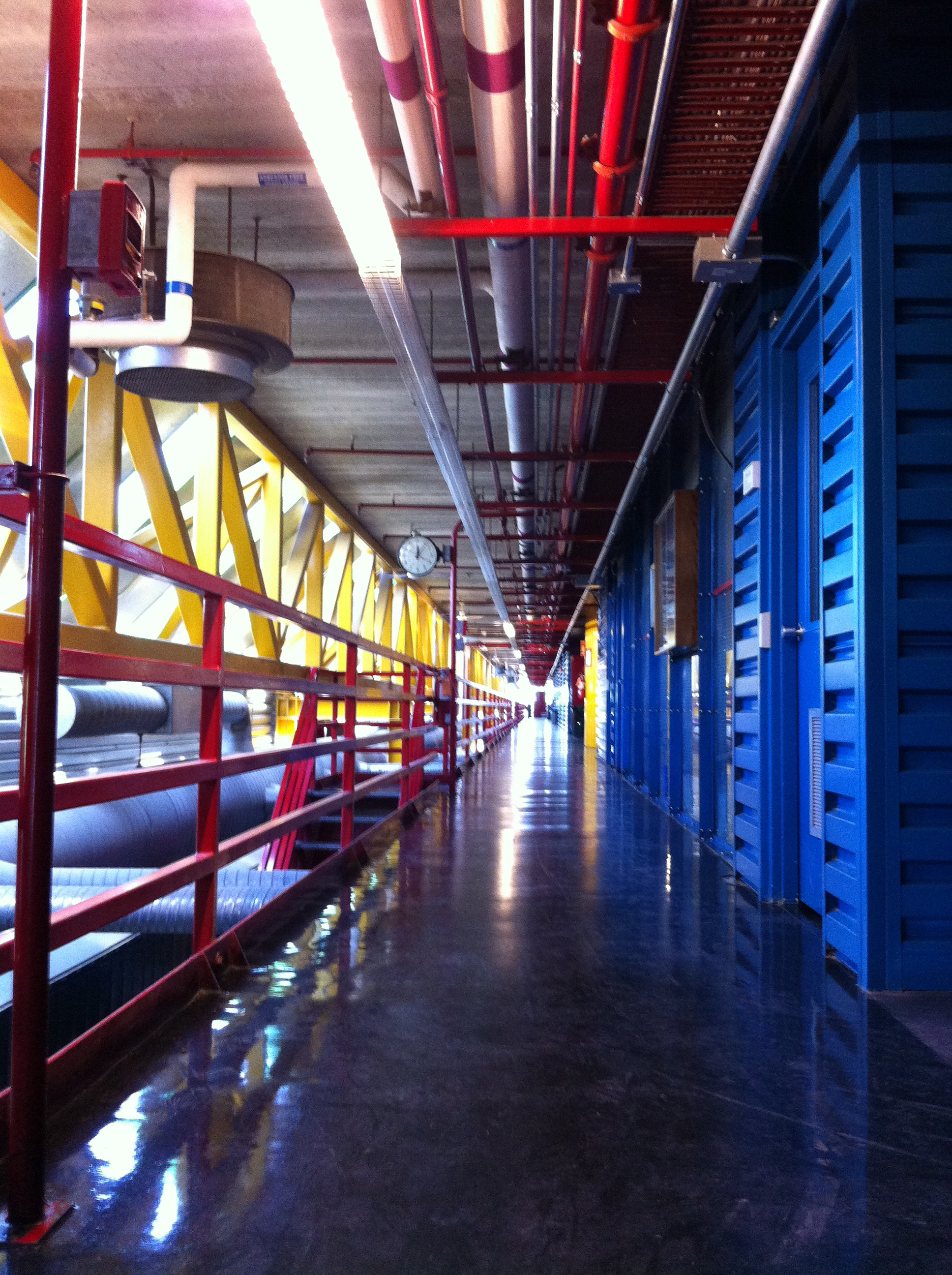 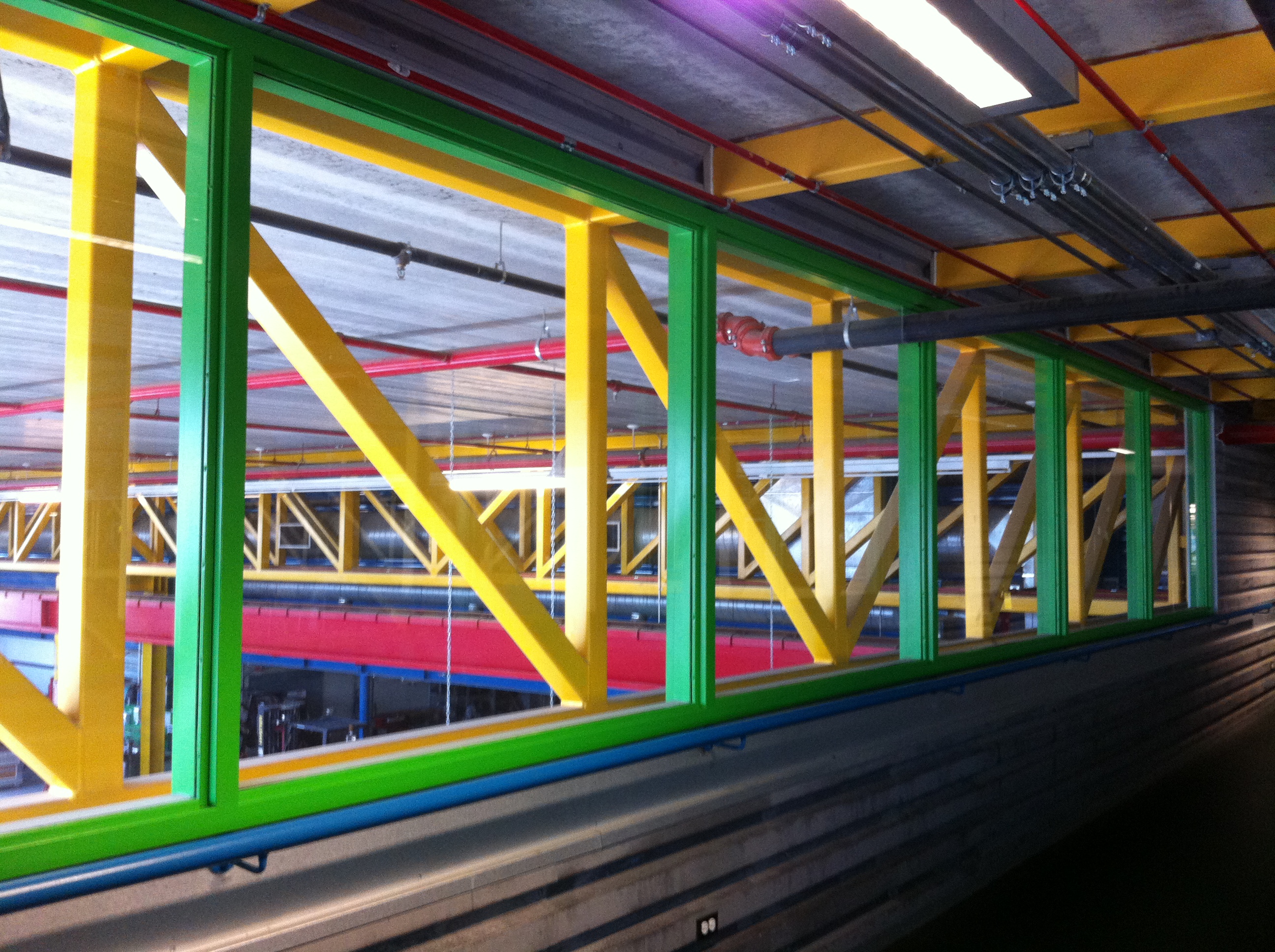 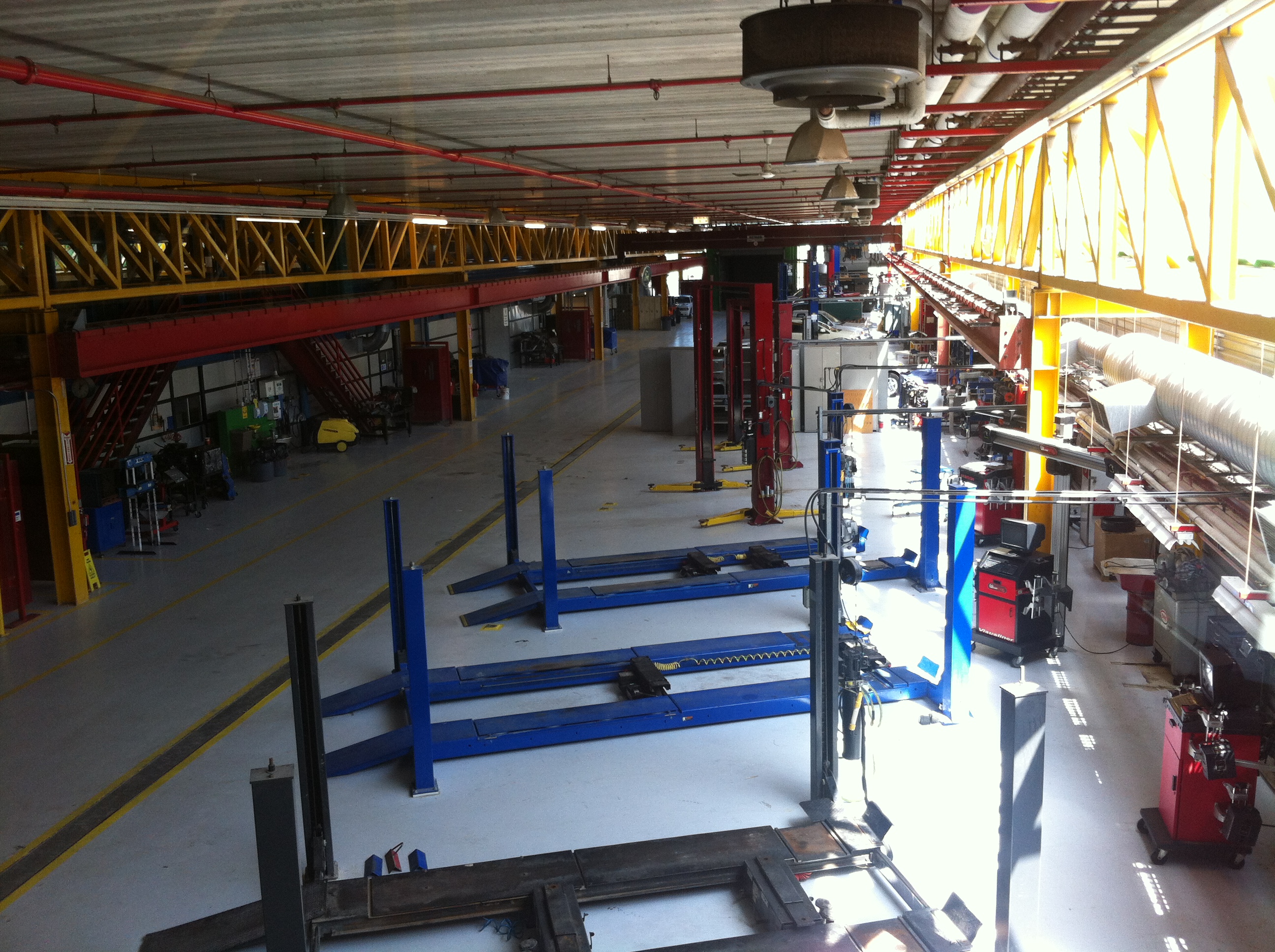 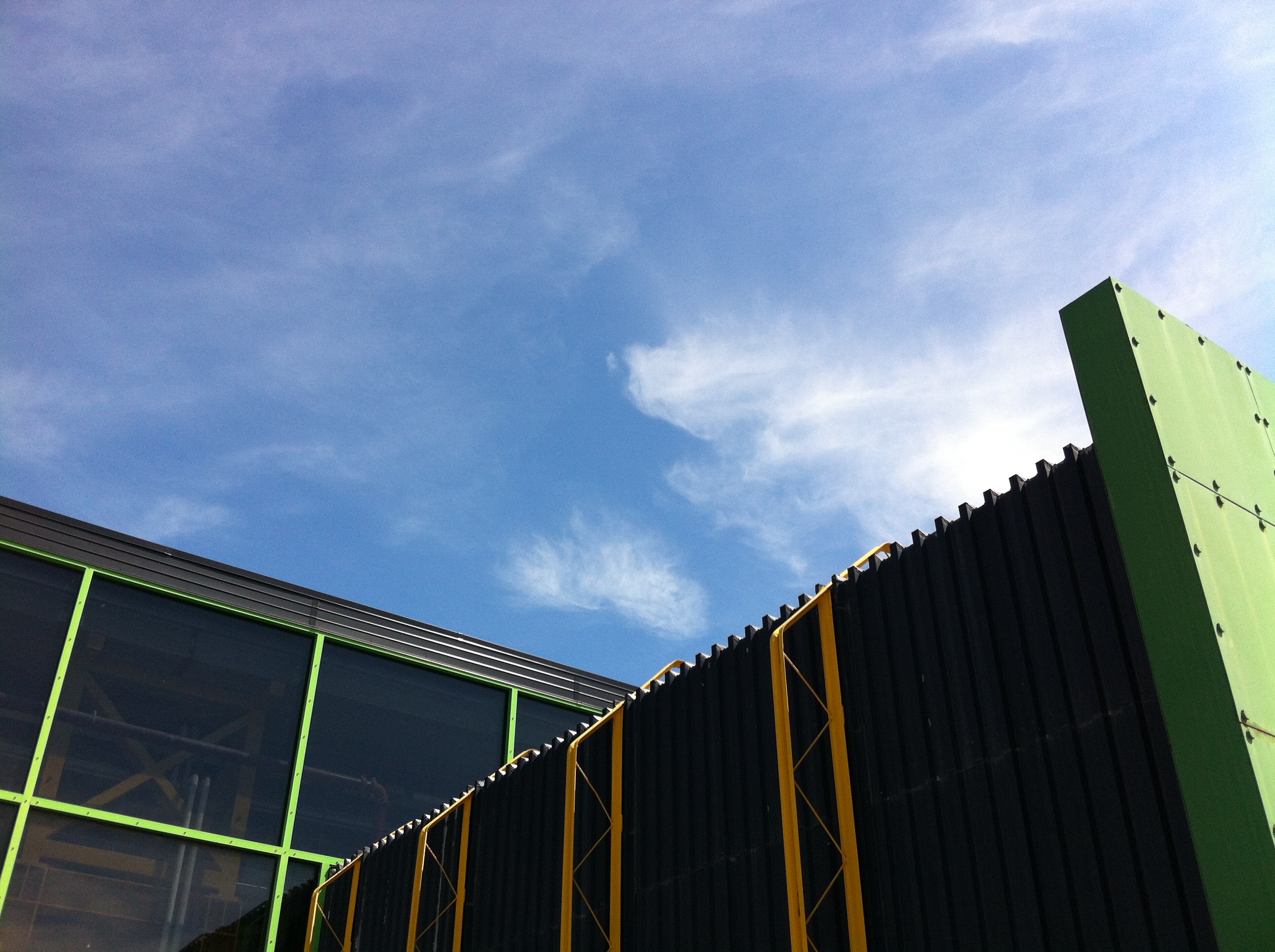 Building M, originally known as the Auto Diesel Shop, is without doubt the most colourful building at Red River College’s Notre Dame campus. The building was designed by IKOY, a Winnipeg architectural firm noted for their so-called “high tech humanist” approach. In this case such an aesthetic seems a perfect match for the courses housed within the structure. Originally these courses involved instruction regarding heavy duty diesel engines of the sort involved in the trucking industry; in the years since, the building has been repurposed to house basic automotive instruction.

An open and tall lab space takes up the main floor, while classrooms, offices and circulation space are found in the floor above. The structure’s construction came after a hiatus in construction at the campus which had lasted for over a decade. Reflecting this gap, the Auto Diesel Shop represents a distinctly late modern approach. The exterior of the building is composed of black aluminum panels (which echo those of the earlier nearby Building J) and glass, both of which are bound and accented by bright green strip-work which emphasize structural framing. Functional external elements (such as exhaust pipes, trusses and doors) are repeatedly highlighted in fire-engine red and bright yellow. On the north and south sides, cubic entry sections jut outward. As with the colour-coding of the aforementioned components, this gesture lends a sense of mechanical separation to the overall ensemble.

If there is a machine-like to the exterior, this sense is only heightened inside. Here exhaust pipes, electrical wiring, plumbing and other such essentials are also left exposed. As with the framework for these elements, details such as hand rails, walls and structural trusses are largely painted in bright tones or left purposefully bare. The entire effect is something like entering the engine of diesel truck itself. Floors are of 12” hollow core planks, in order to deal with the sound and vibration of large equipment. Comparable work by the firm includes the University of Manitoba’s Wallace Building (1984) and the 1978 IKOY offices (396 Assiniboine Avenue). The building might also be related to such work as the University of Winnipeg’s 1969-72 Centennial Hall (by Moody Moore and Partners) and Paris’s Centre George Pompidou (1971-77) by architects Renzo Piano and Richard Rogers. Notably, Building M is the only structure on the Notre Dame campus to be an award-winner, earning a 1986 Governor General’s medal in architecture, as well as a 1987 Manitoba Association of Architects Award of Excellence and, in 2000, a Royal Architectural Institute of Canada Millennium Award.

The Auto Diesel shop is linked to Building J by means of a second level skywalk. This bridge was likewise designed by IKOY in 1986; its colourful treatment of components and angled roof matches Building M. A more recent skywalk runs from above the main lab space and east to Building Z (2008), clad in grey metal siding.