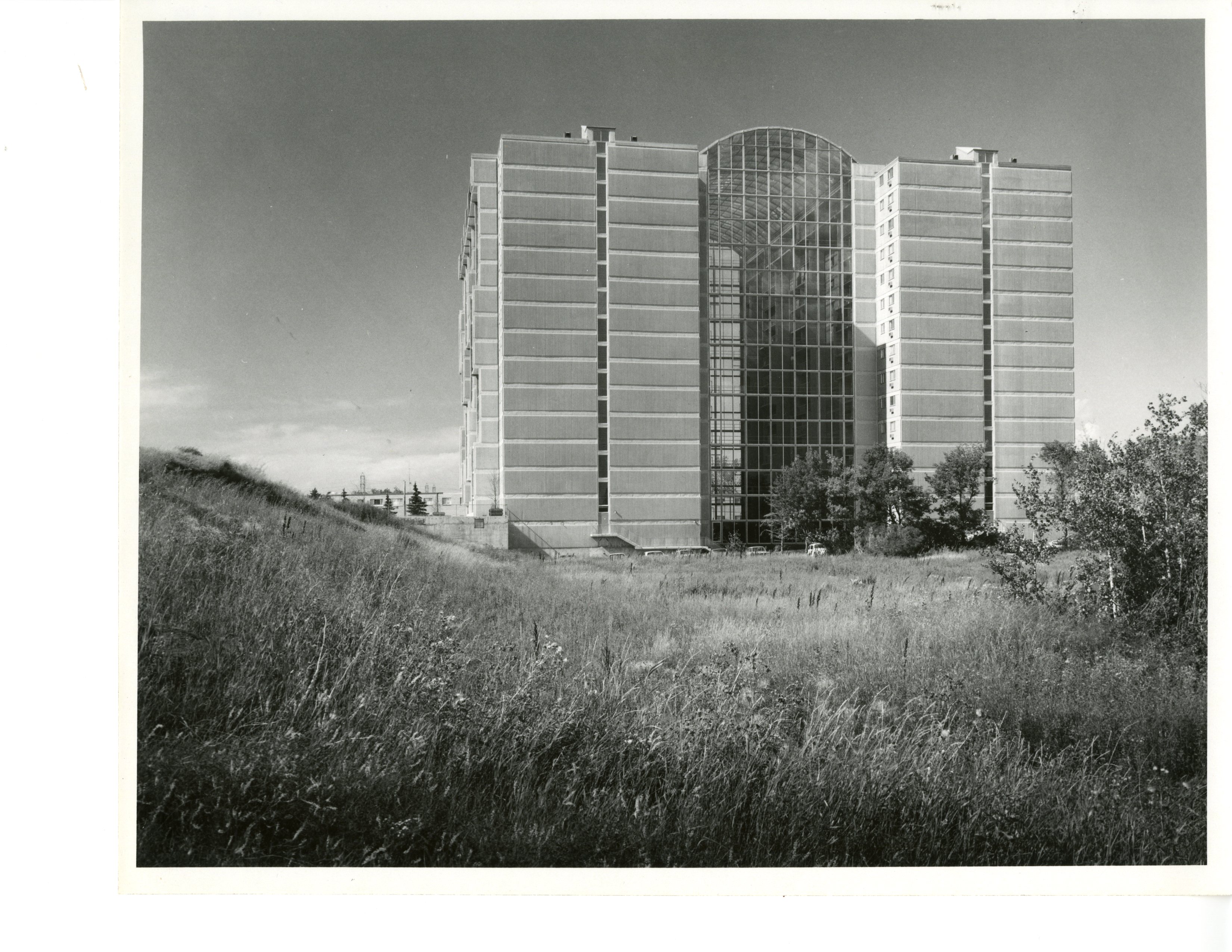 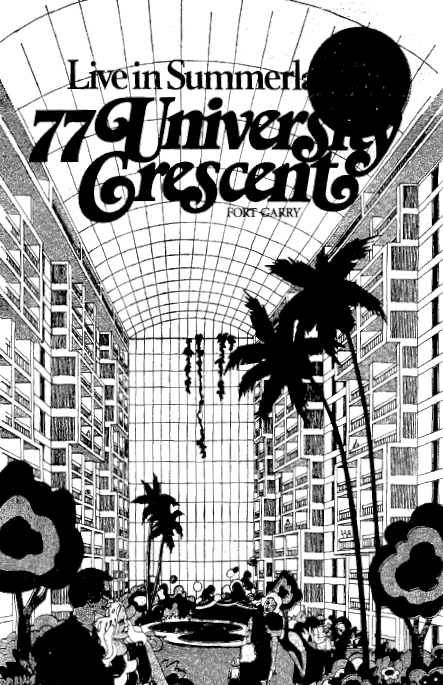 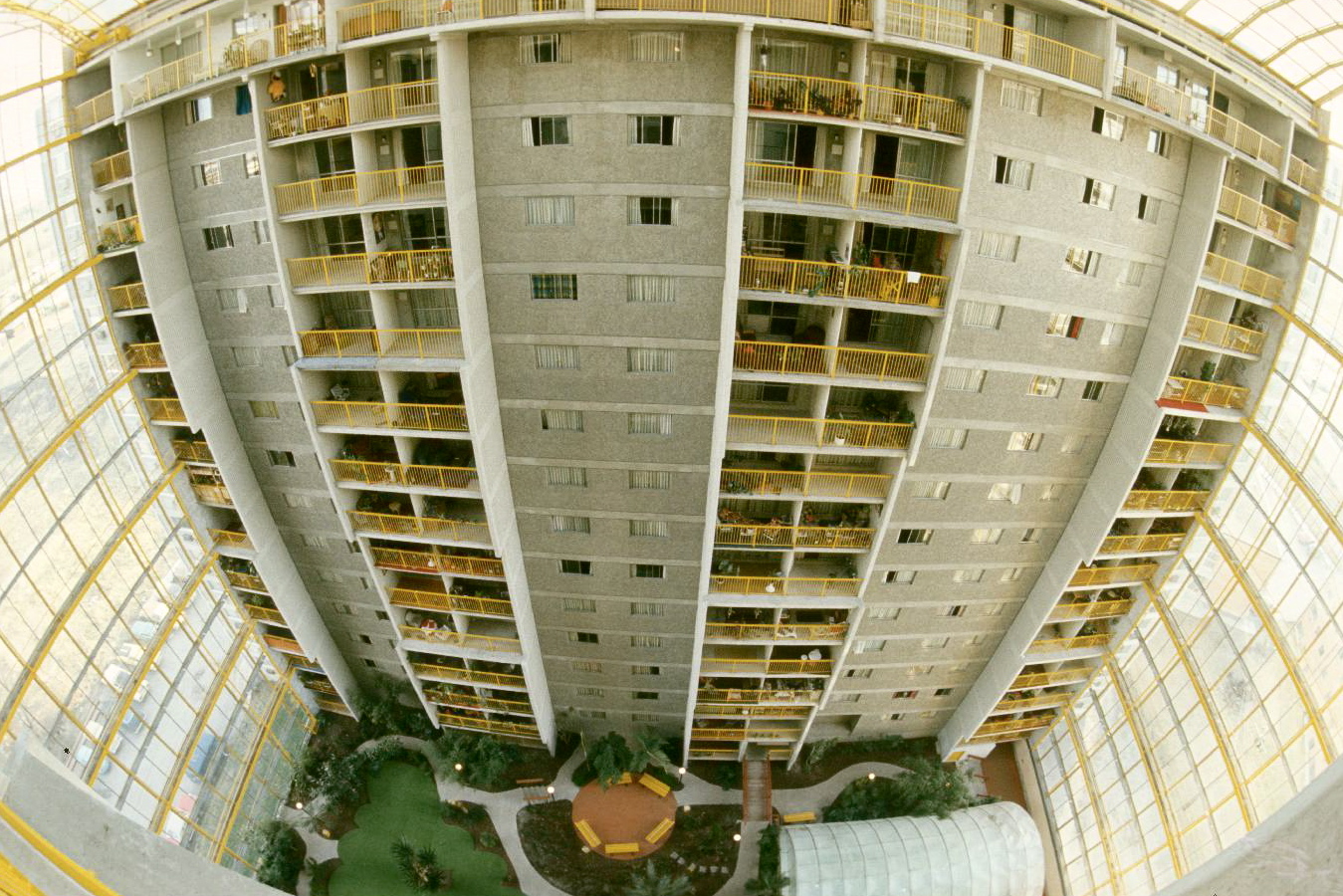 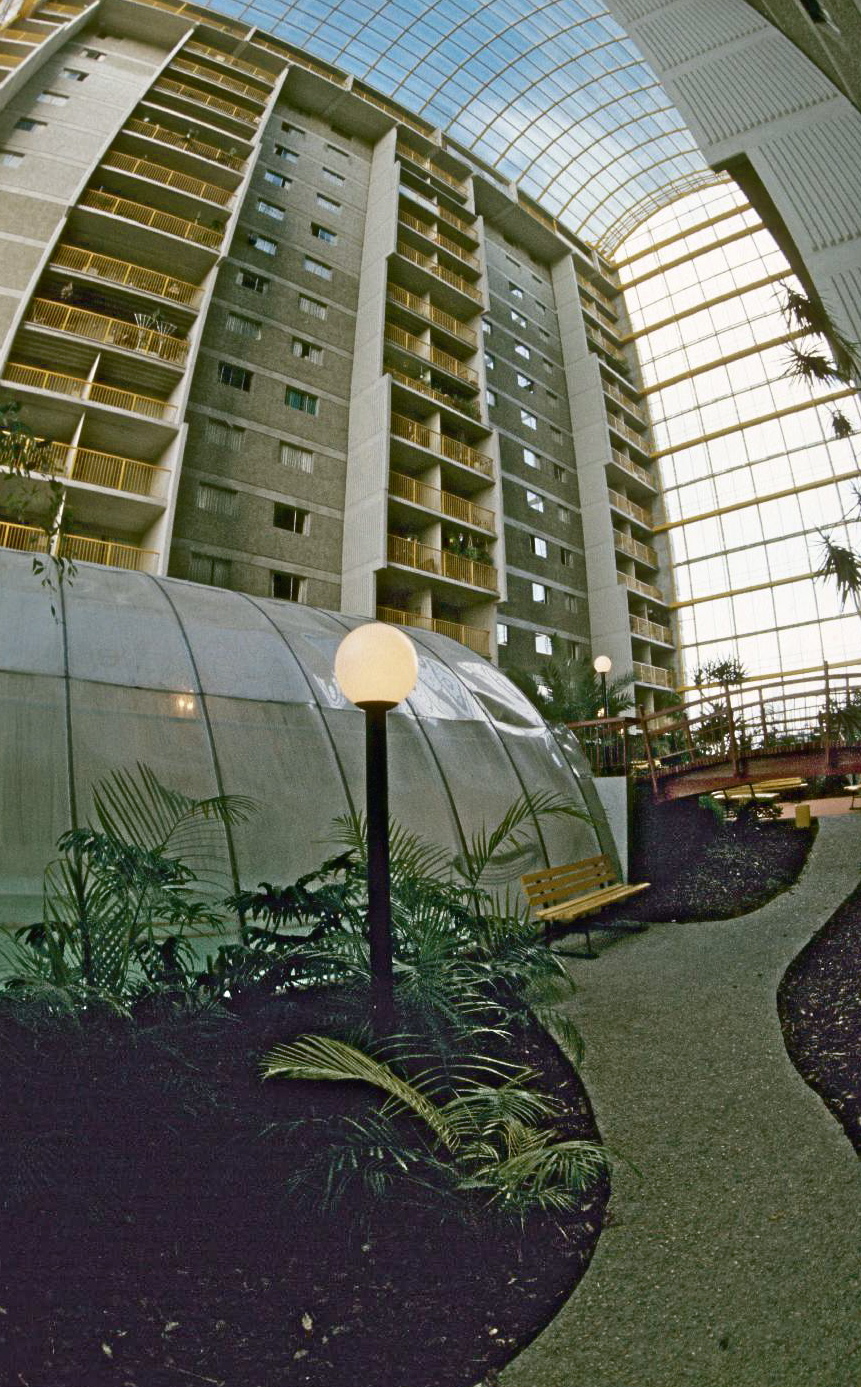 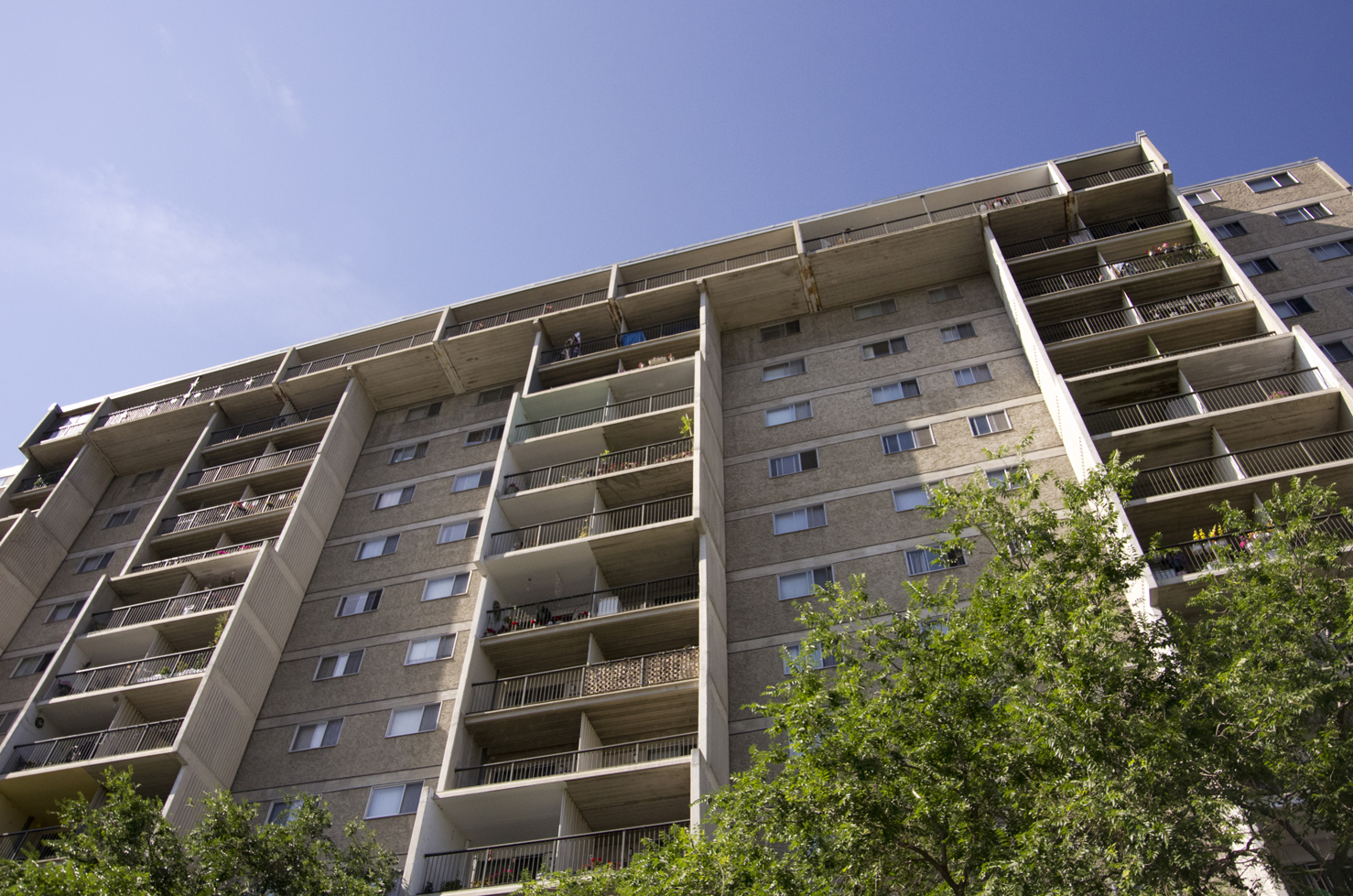 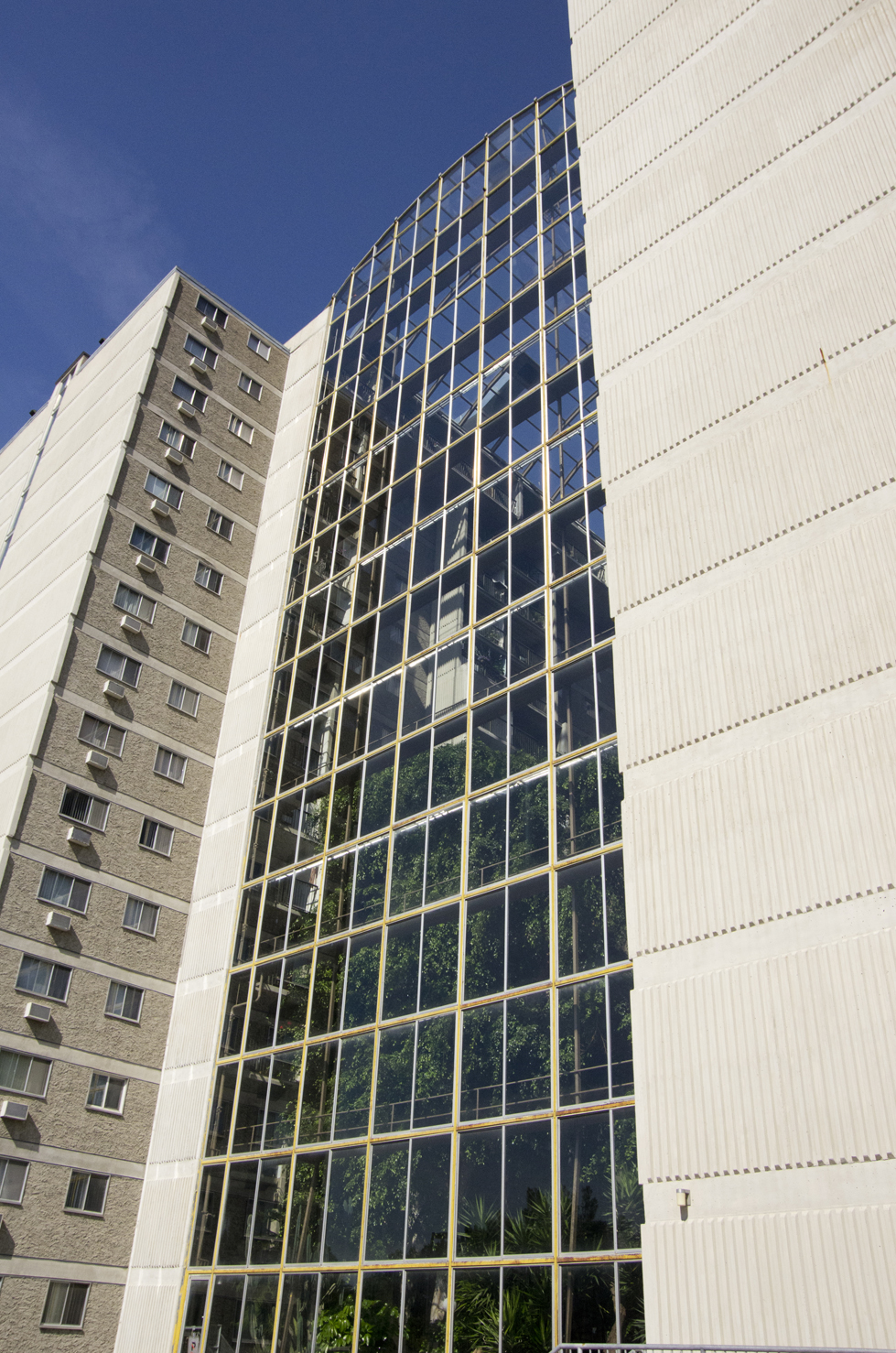 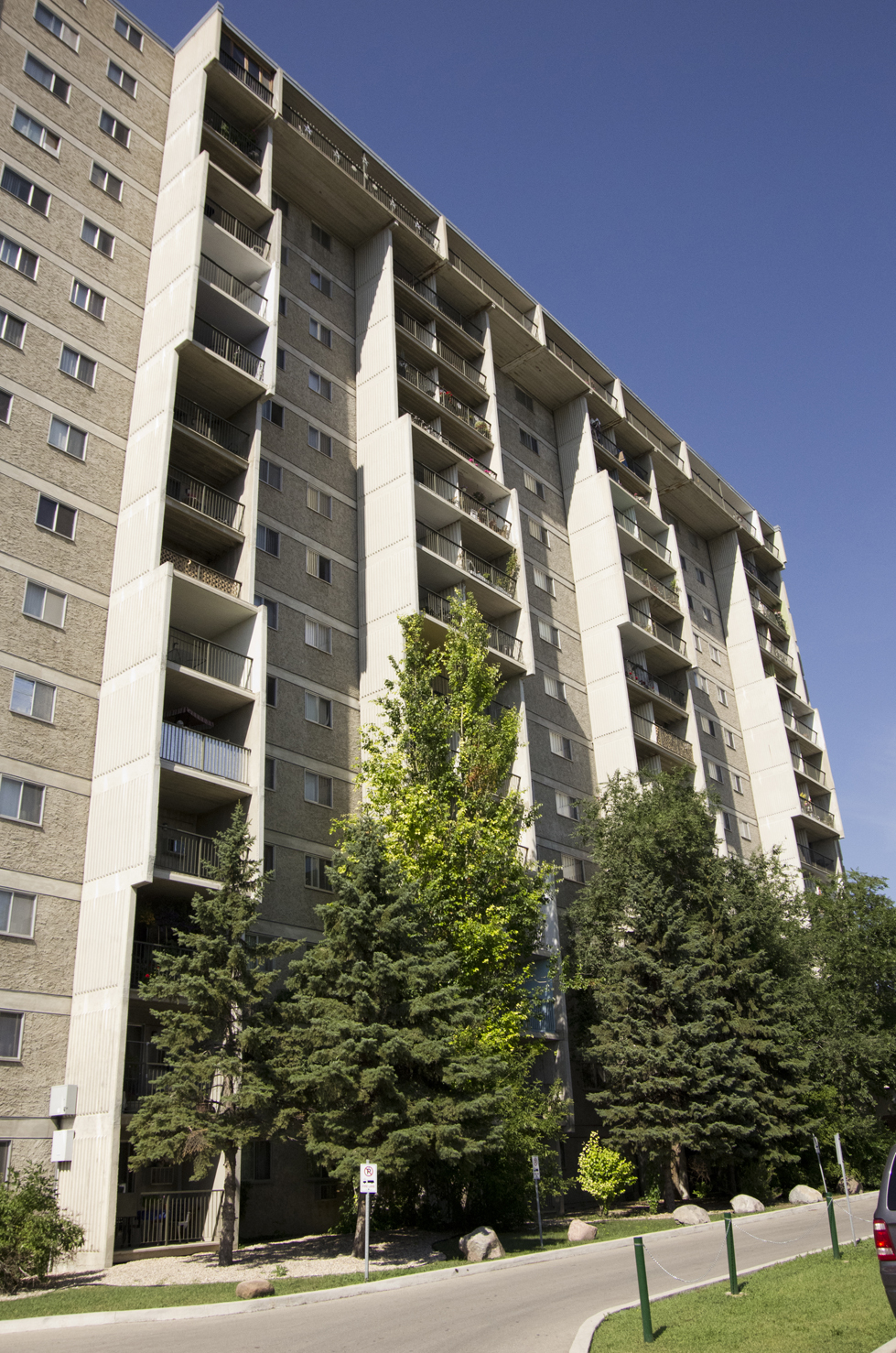 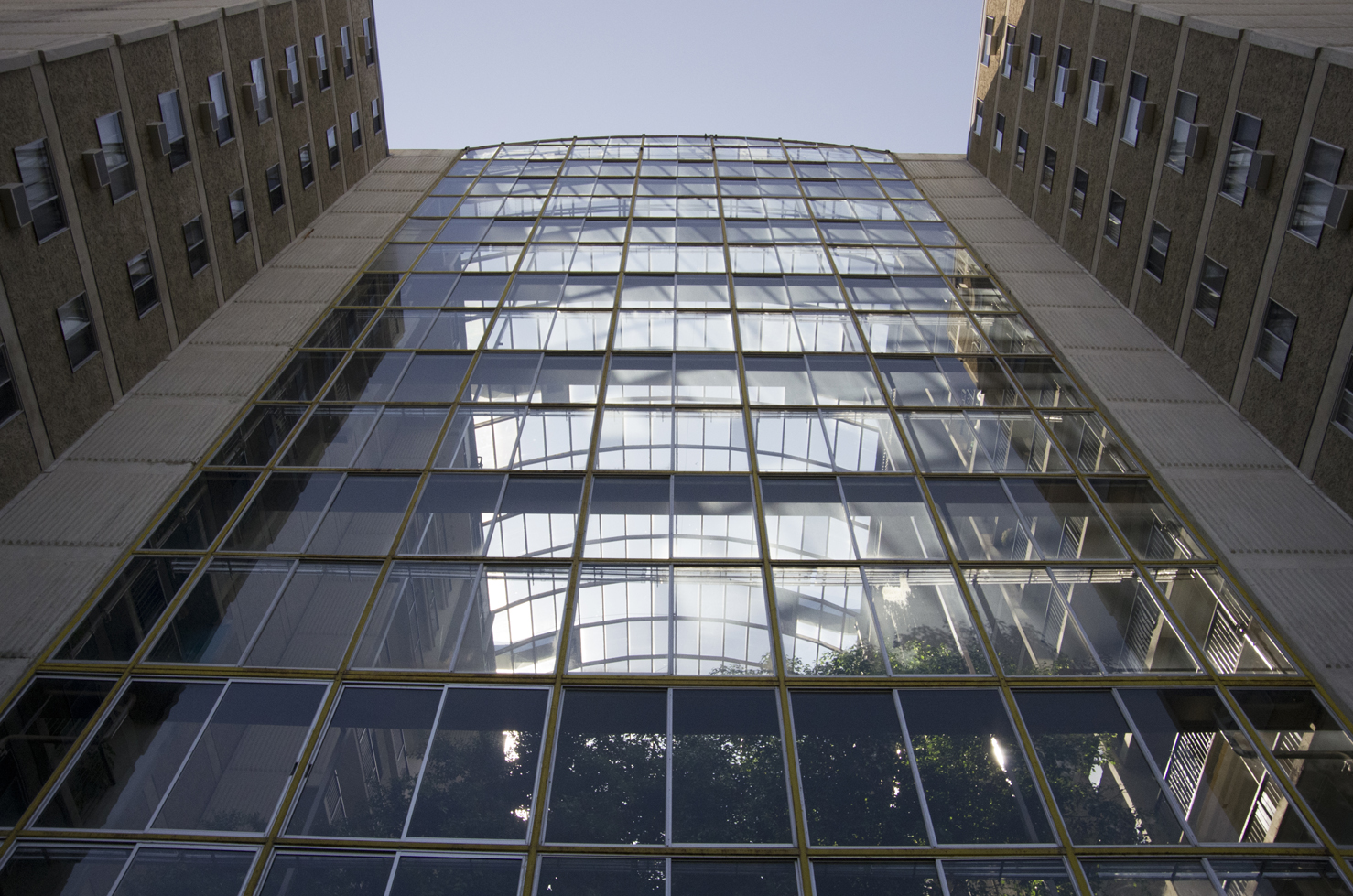 With its twin fifteen-storey concrete towers enclosing the city’s only soaring residential enclosed atrium, 77 University Crescent, also known as “Summerland,” is a distinctive landmark in Winnipeg’s Fort Garry neighbourhood. Plans for the complex were unveiled Monday, 10 January 1972. Designed by Waisman Architectural Group, the building was constructed to house 103 two-bedroom suites and 89 one-bedroom suites and was intended primarily for married University students. Financing for the project was provided by R. C. Baxter Ltd., the Central Mortgage and Housing Corporation and the Co-operative Credit Society of Manitoba Limited. It was developed at the behest of College Housing Holdings Incorporated, a non-profit corporation established to develop housing for students and their families with a concern over a housing shortage near the University of Manitoba. The building was initially operated as a student co-operative.

Period advertising for the complex boasted residents could “Enjoy shirt-sleeves weather year round ... Spend sunny winter days relaxing under a palm tree. Tan or swim before supper. Now South Seas life comes to Winnipeg-for residents of 77 University Crescent in Fort Garry.” They elaborated: “Between the two newest apartment towers in Winnipeg is a special place where summer stays 12 months of the year. Summerland. A graceful transparent roof sweeps across from one apartment tower to the other. Double thickness glass doors slide into place at either end to exclude winter. Rain and snow never get in. Sun and warmth are always welcome. In Summerland, the temperature stays around 70. That's perfect for swimming or putting a golf ball on Summerland's 9-hole green any day of the year. ... Outside in a second large recreation area are 2 tennis courts, volleyball court, jogging track, shuffleboard, barbecues, and a children's play ground.”

The design of the two towers echoes a Brutalist approach, making extensive use of exposed concrete, with vertical linear patterning at the north and south ends of the building. Interest is lend to the balcony-laden east and west facades through modulation in depth. Adding further interest is the use of yellow paint to highlight metal work, a technique in keeping with the development of modern architecture toward an embrace of pop, Supergrpahic, and high-tech aesthetics during this period.

Undoubtedly, however, it is Summerland’s namesake solarium or conservatory style enclosed atrium which is the building’s most notable feature. The integration of passive solar with modern building techniques and the development of a new “solar architecture” was an important trend in architecture the 1970s, as was the popularization of large, multi-storey atria, as embodied in the work of American architect John Portman. Here these dual tendencies were merged in a mode that had a unique valence in Winnipeg’s northern climate – used to foster an interior ambiance of the tropics in an environment at times otherwise forbiddingly frosty. The use of large sheets of glass and thin metal-work to create space – typified by London’s 1851 Crystal Palace – was an important precedent to the development of modern architecture, one that led to the popularization of conservatories and arcades such as Milan’s Passage Vittorio Emanuele. At Summerland this glassy and light enclosure of space is merged, as in Milan, with the counterpoint of heavy surrounding form. In combination, the aesthetic is almost one of a vertical concrete and metal sandwich: a framing that lends further allure to the verdant space hidden within. Interestingly, a similar embrace of glazing to create space was later recapitulated by Waisman in the design of Vancouver 1986 Expo British Columbia Pavilion and Plaza of the Nations complex.