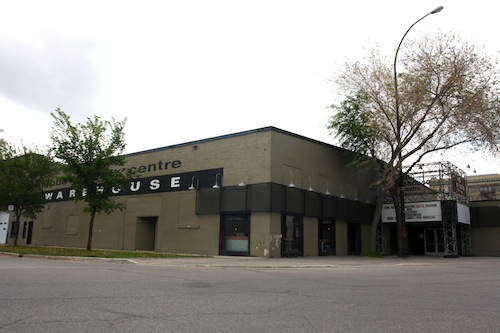 Designed by local architects Northwood & Chivers, 140 Rupert Avenue was constructed in 1946. Originally built for use as the Brewery Products Ltd. Garage, the building is currently employed as a 300 seat theatre. The Royal Manitoba Theatre Centre’s second stage has, over the years, changed both location and name. Originally housed in the old Dominion Theatre, it was simply known as the Studio Theatre. In 1965, with a new location, it was appropriately called Theatre-Across-The-Street and in 1969, a permanent facility was established at 140 Rupert Avenue and a new name introduced, the MTC Warehouse Theatre. At the 50 Anniversary Homecoming celebration on May 11, 2008, the Warehouse theatre was officially dedicated to MTC co-founder and first general manager, Tom Hendry.

The exterior of the modest two storey structure is faced with brick with pre-cast concrete sills and coping. Numerous problems existed with the original structure including uneven floors, as well as inadequate soundproofing and plumbing. To remedy these issues, major renovations to the interior and exterior of the building in 1998 and 2000 have brought the theatre to its current state.