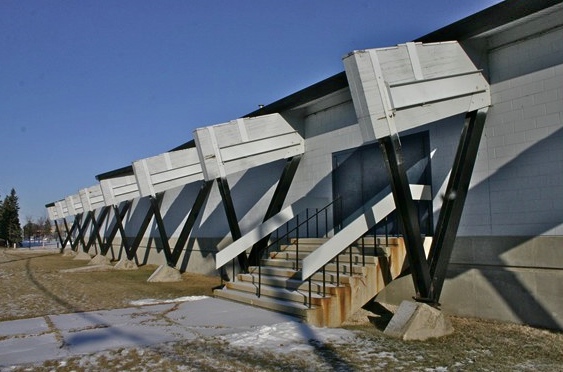 The Century Arena was one of many projects erected to celebrate the centennial of Canada's confederation. As with many of the centennial projects, the building utilizes a modernist architectural vocabulary to house and communicate its program and ambitions. In the case of the arena, perhaps the most distinctive element of this approach are the unique triangular buttresses which hold aloft the building's rafters, which protrude outward. This gesture speaks to the thematization of structure within modernism, and lends interest to the arena's east and west facades.

Located in Winnipeg's Fort Garry neighbourhood, the Century Arena stands at the corner of Clarence and Hamelin Streets, south of McGillivray Boulevard. The arena has an artificial ice plant and its ice surface is a standard 200 x 85 feet. It seats approximately 1,000 persons. A juvenile tournament was held to commemorate the opening of the arena in 1967.