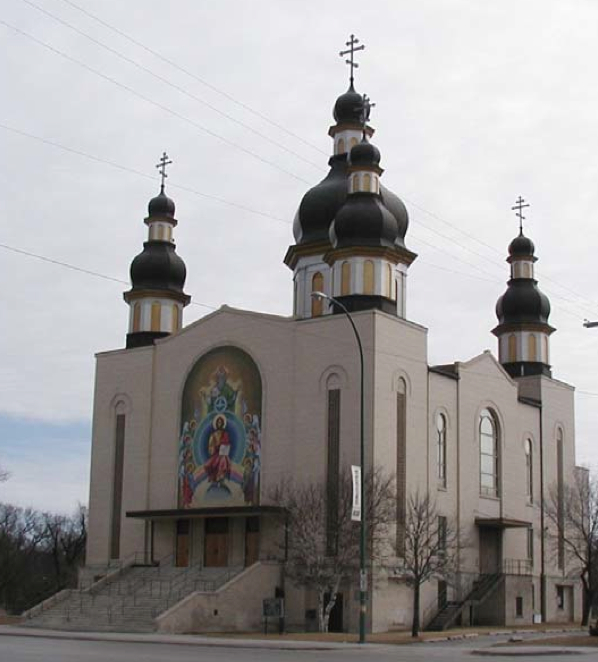 Holy Trinity Ukrainian Orthodox Cathedral, adjacent to the city’s historic St. John’s Park, is a towering form on Winnipeg's Main Street. The imposing five-dome church is partially modeled on Saint Sophia Cathedral in Kyiv, Ukraine. It took almost 14 years to build. Work began in 1949 and starting in 1951, services were held in the present basement of the building. The $500,000 upper structure of the cathedral opened in January 1962 to host Ukrainian Christmas services that year.

Holy Trinity Cathedral’s style represents a fusion of a contemporary take on the traditional Kyivan style of church design with modern materials and elements borrowed from modern architecture. The original design for the cathedral came about as a result of a competition, taking the form of a sketch entitled Kyiv, submitted by George Korbin and Alexander Powstenko in 1948. The original (basement and auditorium) portion of the building was executed by Winnipeg firm Pratt and Ross. The upper structure of the cathedral was designed by Alex Nitchuk, Green Blankstein Russell. Nitchuk’s design borrows the silhouette and massing of Saint Sophia Cathedral’s onion domes and towers. A notable feature of Holy Trinity Cathedral is the 24-foot cast aluminum cross, which stands atop the central 135-foot tower. The cathedral's towers were erected using a special 120-foot crane to lift pre-assembled structural steel sections. The lift was reported to be one of the highest for a prefabricated structure in the city's history as of 1961. Another point of focus is the enormous mosaic of the Holy Trinity, facing Main Street, which dates to 1988 and was designed by noted Winnipeg artist Leo Mol.

Inside, the building’s decoration is impressive. There are colourful stained glass windows, designed by local artist and interior designer Ben Wasylyshen in the late 1990s. Its two large windows bearing images of Jesus Christ, the True Vine and the Mother of God are almost six metres tall – satisfying the request by parishioners and clergy to include both Byzantine-type icons and a great deal of natural light. Winnipeg iconographer Vera Senchuk painted the faces of the figures and Prairie Stained Glass assisted in the windows' production. Senchuk furthermore contributed many icons in the cathedral’s sanctuary. A similar balance is represented in the abundance of images of wheat, which possesses religious connotations, while also suggesting both the Canadian Prairies and one heart of the Ukrainian economy. The large golden iconostas is thought to have been designed by New York-based Juan Denysenko and installed in 1974.

Holy Trinity Orthodox Cathedral is also home to the Manitoba branch of the Ukrainian Museum of Canada.